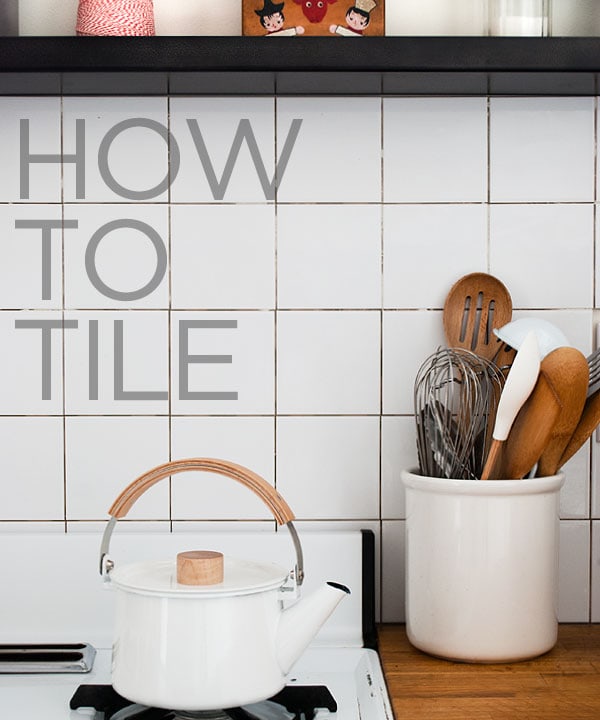 I am really not one of those people—the people who get sick a million times every winter and spend the rest of the year dreading the cold months with a palpable sense of terror and despair. I generally weather the winter months just fine, save for three years ago when I contracted Swine Flu and was quarantined to my dorm room with little more than a box of Kleenex, a few DVDs, and some cough syrup with codeine. Which really just ended up being kind of a fun vacation, at least the parts I remember.

But this year has been so different! Head colds here! Sinus infections there! I am a walking cesspool of virus and disease! Over the course of the past week, I have demolished entire jumbo boxes of Puff’s tissues with ease, spent more hours in bed than I previously thought possible, barely showered, and asked in earnest “what’s a credit card?” during a bout of fever. I am so done with this bullshit.

This got me thinking about the last time I was sick, which, as it happens, was only a few weeks ago. I remember this time vividly because I chose the opposite recovery strategy: instead of lying low, biding my time, and staying hydrated, I decided to live large. Nothing would hold me back. It was time to tile my kitchen’s backsplash, and neither searing headache nor minor fever would hold me back.

I don’t know if it was the tile or just a much, much less miserable virus, but distracting myself with tiling while also feeling generally terrible turned out to be an OK strategy. There were no bowls of steaming soup or cups of tea, but there were headachey trips to Home Depot and then Lowe’s looking for a simple saw (later ordered on Amazon anyway), and some fun coughing fits while hauling a 50-pound bag of thinset powder down a street and up five flights of stairs.

The important question isn’t why I got myself into this, but what I got out of it, which was basically not feeling totally useless and hopeless. Which, after the past week of feeling nothing but despair and misery, I can say is worth a lot. 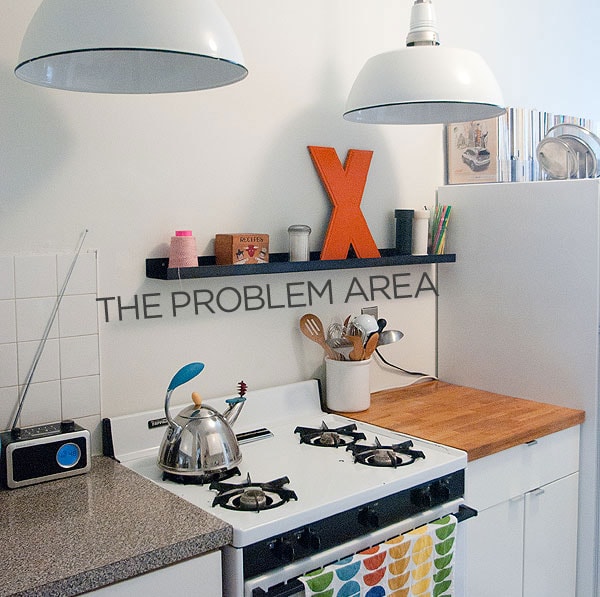 I talked about tiling my kitchen backsplash a while ago, and mentioned that it was proving difficult to find white 4″x4″ tile to match the existing tile that the landlords installed about a decade ago. In theory, matching this tile seemed like a pretty simple proposition, but there are many different brands of tiles, each of which boast a range of different whites. Added to that is that even the same white may vary between dye lots. Oh, and glazes tend to change slightly over years of exposure to sunlight. So yeah—100% matching tile, not happening. Like ever.

I know a lot of people had strong, valid opinions and ideas regarding this very important topic. There were ideas about doing something different behind the stove to break it up, about using a different material entirely, about ripping down the existing tile and replacing it entirely, but ultimately it all seemed like too much. Backsplash tile is supposed to be utilitarian and functional, and that’s all I really wanted. Tearing down the existing tile seemed just a little over the top for a rental (EVEN for me), and would probably lead to a whole mess of drama of replacing the drywall, discovering mold/monsters in the walls, dying, etc. 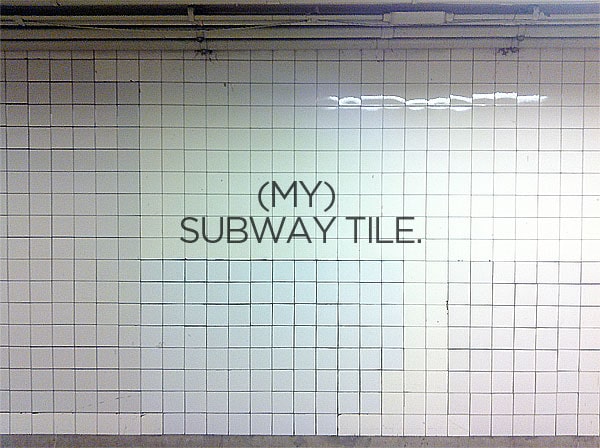 So ultimately I just decided to match the tile as closely as possible and move on with my life. This is, after all, a Brooklyn rental apartment, and that’s kind of how it goes here—things don’t always match, nothing is perfect, and that’s OK. Hell, most of the NYC subway stations are tiled with white 4×4, and it’s all a crazy patchwork of different whites. Look at that picture! There are at least 4 different whites there. But it’s fine. It’s whatever. It’s New York. Deal with it or GTFO.

So, my backsplash! It’s not perfect, and I’m fine with it. And I really think that once the kitchen is finished, the mis-matched tile will be hardly noticeable. 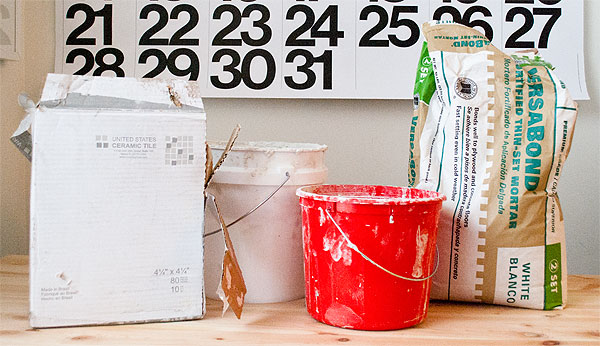 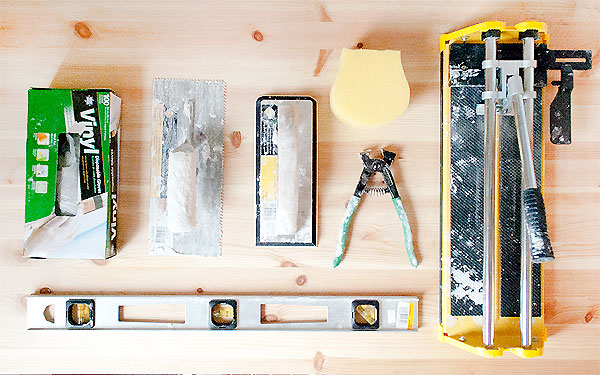 My beautiful tile-happy friend, Anna, came over to teach me how to tile since this was my first time, and I’m super grateful. There was a LOT I didn’t know, and I now realize that my plan to “kind of wing it?” was severely stupid and I’m so lucky to have an Anna in my life. If you don’t have an Anna, I will try my best to teach you my limited knowledge of tiling now.

Firstly, supplies! I really should have taken these pictures before I used everything and mucked it all up, but you’ll definitely want:

2. A couple of big-ish buckets.

3. Thinset mortar. I actually used a mix of pre-mixed thinset and powdered thinset during this project, and to me they seem to work the same, although powdered is supposed to be stronger. Thinset comes in either a grey-ish color or white—I’d recommend white but it doesn’t really matter with solid ceramic tiles.

4. A box of disposable latex gloves. Tiling is MESSY and you’re doing yourself a HUGE favor if you can just periodically remove your gloves and toss them. It seems wasteful, but it’s really kind of necessary.

5. Notched trowel for applying the thinset. Try to take care to wipe this thing down FREQUENTLY. Or be like me, let a hard cast of thinset completely dry around the handle, and learn the meaning of real shame when Anna asks to borrow it a few weeks later and says when you hand it over, “oh, you don’t take care of your tools, do you?”

6. Rubber float for keeping the tiles even and applying grout.

7. Nippers. If you have to make any small cuts to work around irregular stuff or remove spacers or whatever, you need these.

9. Score and snap tile cutter. This handy tool is very easy to use and only about $20, and way less scary than a wet-saw.

10. A level! You really need to make sure your tile is staying level, so this one is important. 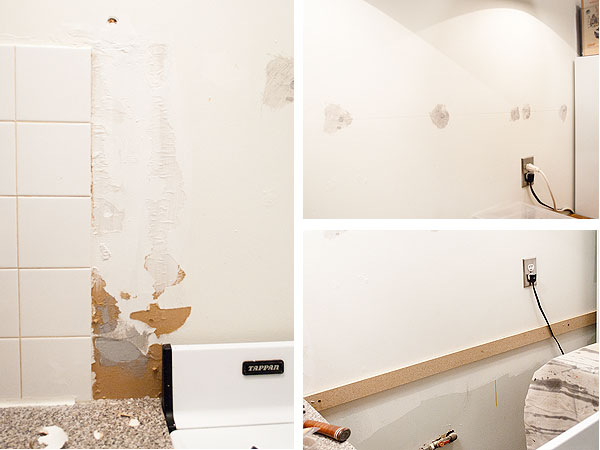 First, you need to prep the space. For me, this meant removing the shelf and patching the holes in the wall, removing the last column of existing tiles (it had a plastic trim piece at the end, which is installed under the last row of tiles, so the tiles needed to come down to remove it), and painting the wall where the old thinset took the outermost layer of drywall with it. Because thinset is water-soluble, the surface it’s being affixed to should always be painted—never tile directly over unpainted drywall or joint compound. At the same time, thinset won’t adhere as well to glossy paints, so either rough up the surface a bit with sandpaper or scrub with TSP, depending on how glossy the paint is. I’m really not an expert on this.

Next, Anna and I mounted a piece of wood to the wall to support the bottom row of tiles. Tiles will move with gravity while the thinset is wet, so they need a solid surface to sit on while they’re drying. 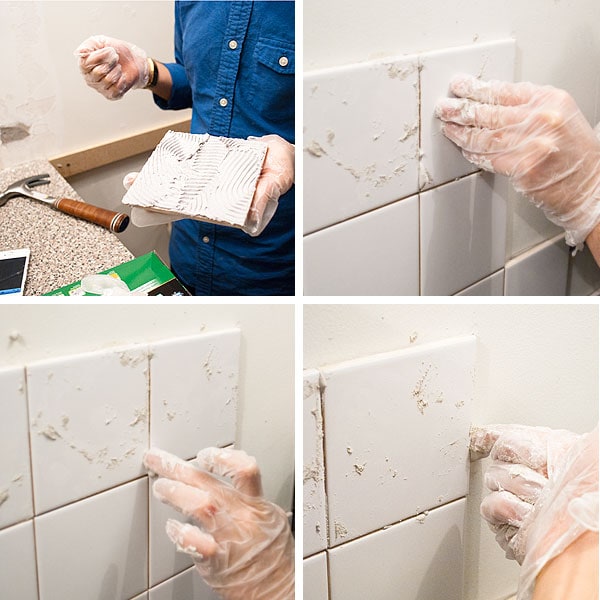 Mixing directions will be on the back of the thinset bag, but it should be about the consistency of mashed potatoes or peanut butter when mixed. It’s important to get the consistency right—thinset that’s too watery is bad news. Make sure the grooves stay rigid after being applied with the trowel and it should be OK.

Obviously, putting ANY amount of thinset down your drain is a terrible idea, so this is where the buckets come in. Mix the thinset in one bucket and fill the other with water, which you’ll use to wet your sponge and keep tools clean throughout the job. Later, when you’re finished, use the bucket to give your tools a cleaning and dump it outside, where it won’t fuck anything up. If you have access to an outdoor hose, you are SO LUCKY.

We decided to back-butter these tiles, applying thinset to the tiles themselves instead of directly on the wall. This allows for greater precision, which was important because the new tile is butting up to existing tile, so it was really important to constantly make sure things were level and looking OK.

When applying thinset, it’s important that it be multi-directional (the grooves act like suction, so using multiple directions improves adhesion…or something). Each tile needs to be pushed gently into the wall, and it’s a good practice to use your finger to remove any thinset that might come out from around the edges after every tile. This keeps the job clean and orderly instead of chaotic and nightmarish. You’ll also thank yourself later on when you don’t have to scrape your grout lines before grouting.

Every five tiles, Anna recommends using a lightly damp sponge to clean the surface of the tiles, the grout lines, and around the edges of the row. Again, this keeps things feeling clean and manageable and makes clean-up at the end much, much easier.

Also every five tiles, run your rubber float over the tiles just to make sure that things are all on the same plane. Especially when back-buttering, it’s easy to have inconsistent thinset thicknesses between tiles, so it’s important to frequently check if everything is flat and even and make adjustments accordingly if they aren’t. You don’t have long to remove an odd tile and add more thinset, so consult with the float frequently.

I basically just went on like this for the entire wall, building from the bottom row up. Tiles likes this are self-spacing, so there’s no need to use spacers (you’ll have huge, sad grout lines if you do!). If I’m being honest, all of this took a lot of time and energy and overall was surprisingly torturous. Tiling is a weird thing that makes you feel miserable while it’s happening, and then for some reason hungry for more when you’re done or between sessions. I simultaneously want to tile all the things and never tile again ever. 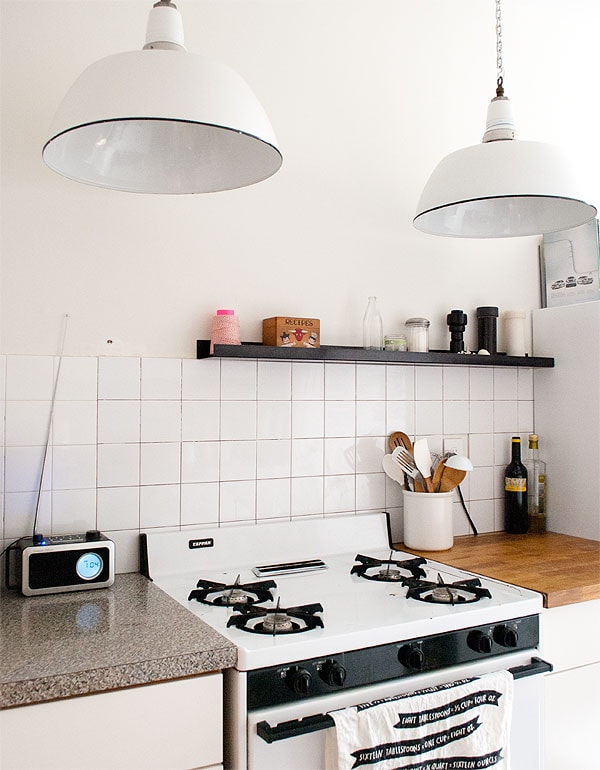 And here’s the current status! I’m totally ashamed to say that I STILL haven’t grouted, which is why it all looks kind of dumb and unfinished. I know grouting shouldn’t be that difficult, but I really need to be able to set aside a few hours for it and I’ve just been either super busy or super sick and it just hasn’t happened. The main point of this post is to shame me into making sure it happens soon though.

SO. You can definitely see where the two different tiles come together. It’s not a great match. BUT. BUT. BUT. I really think that once everything is grouted (the old tiles will be re-grouted), the tiles will look much more unified. AND when I get around to mounting the second half of the ledge (it has to be cut down a bit first), the transition point will totally recede and nobody will even think about it. I think. I hope. If I keep saying it, it’ll definitely be true.

I Built a Fence!