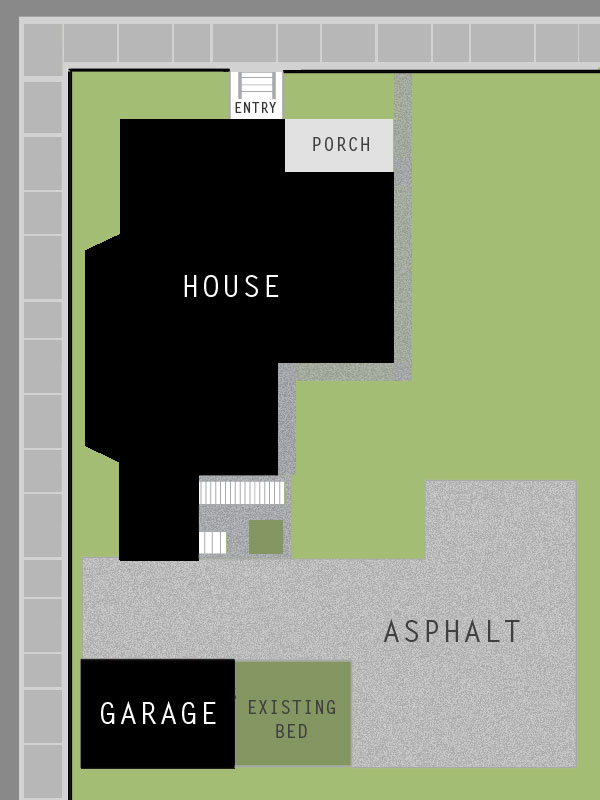 At long last, the exterior! 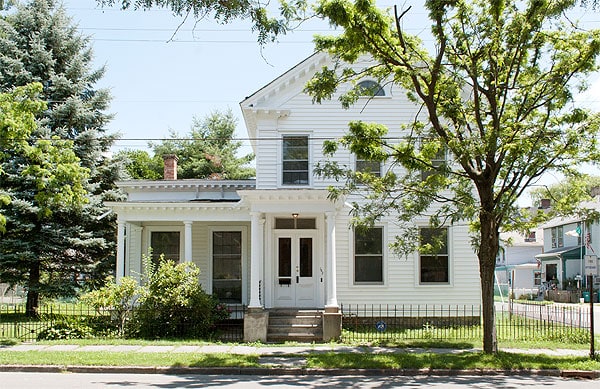 This is our house from the street! When we first saw the house over the winter, there was about a foot of snow on the ground and it was impossible to tell what was going on with the yard, but by the time we closed, the yard had become completely overtaken by tall grass and weeds. Over the first couple of days, Max worked really hard to mow the grass and clean up what we have. It’s really important to us that after 2 years of vacancy, the house finally looks like somebody is taking care of it. That goes a long way in the neighborhood, too.

Even though the exterior needs a lot of work eventually, we’re really lucky that it already looks pretty cute without doing anything major! The bones are there. Most of the houses in our neighborhood are on smaller properties and lean toward more traditional Victorian details, but ours has a larger piece of land and looks pretty different architecturally from everything around it——which, to me at least, might be another indication that it’s older than a lot of the surrounding houses. We’ve yet to pinpoint a date, but we’ve done some preliminary research. I’ll write a post about some history when we know more!

ANYWAY. At some point, probably in the 70s, vinyl siding was installed on all the exterior walls, but the original clapboard is right underneath. Even though I want to rip all the vinyl off and restore the clapboard RIGHT NOW, we’re definitely going to wait on that for a while. Since the vinyl is white, it doesn’t really impede on the look of the house very much, and we have no idea what we’re going to find underneath. As with the inside of the house, it just isn’t wise to start exposing anything that we’re not ready to deal with yet. Sometimes people tear off vinyl to find the clapboard in great shape and easy to restore, and some people end up with lots of rot——and then tons of time and money——to restore it. Obviously, when the time comes, I’m hoping that we find the former, and I’m also hoping that whatever nice moldings used to exist around the windows are still there. 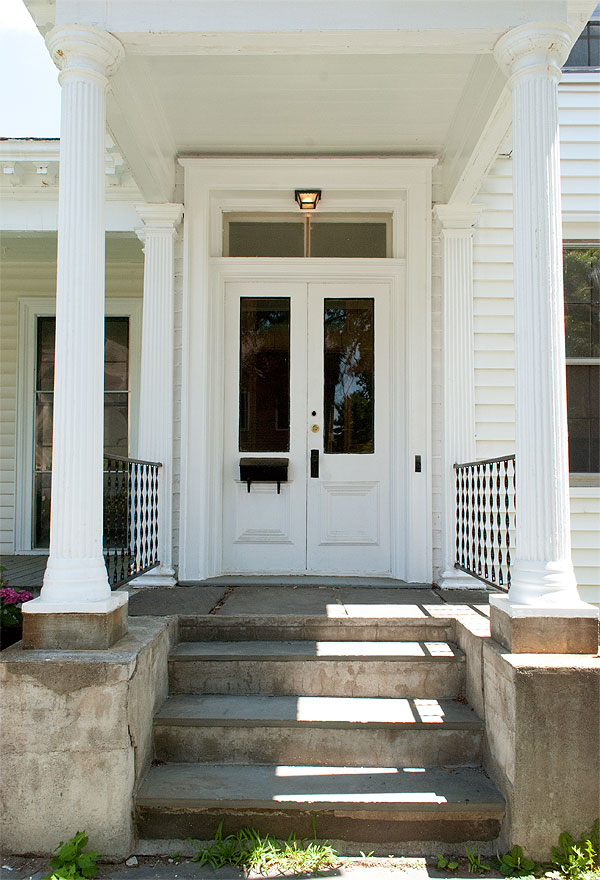 I really love the crazy entry with the crazy columns, which are repeated on the porch off to the side. The banisters extending between the front columns and the house are definitely a newer addition, but they’re OK enough for now. The concrete needs to be re-faced at some point and the steps could use a little restoration, but nothing is so far gone that it all needs to happen this instant.

I love the front doors. I’m debating trying to strip the doors and stain/seal them so that they’re natural wood, but that might also make me insane. Maybe they just need to be black? I like a “pop of color door” as much as the next person, but I really don’t think it’s right for this house. 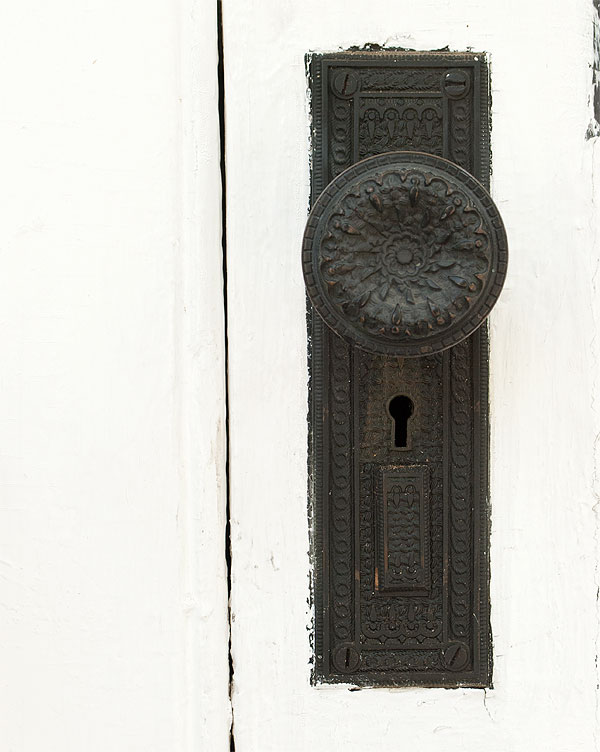 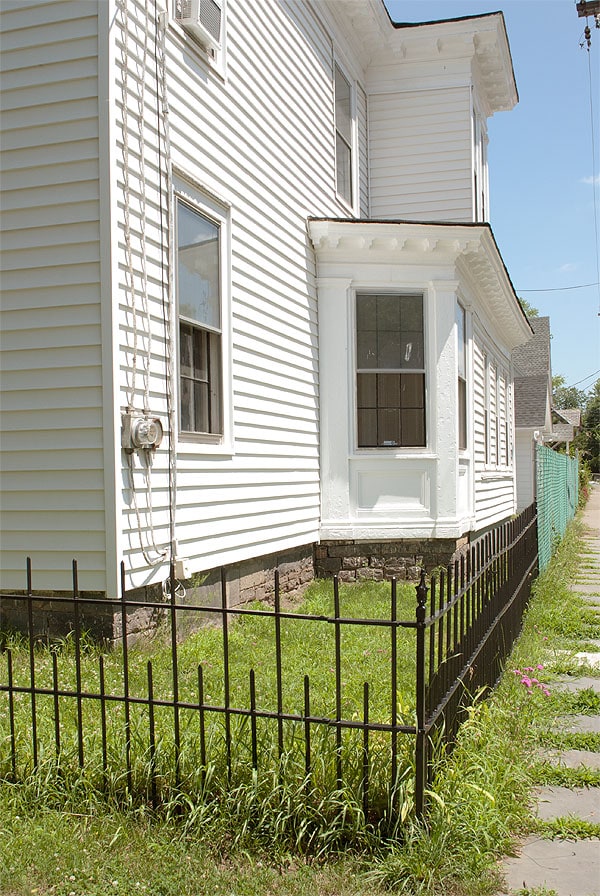 I love the little wrought-iron fence that covers the front and part of the side of the house. So cute! When we can finally landscape, I really don’t want to have any sod at all at the front of the house or on this side. We have plenty of yard in the back, and grass is a pain to maintain (WE JUST MOWED THIS.) and isn’t the most environmentally friendly choice. Can’t you just see it with beautiful luscious gardens all along the front and side? It will be so nice. 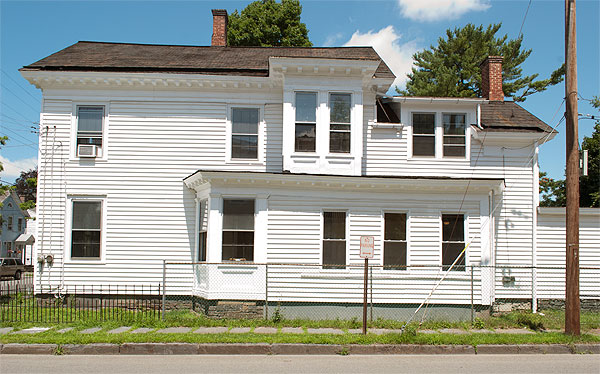 The side view of the house is where it kind of starts to look a little bit Frankenstein. My guess is that the original house had one bay window on the first floor, and later (when the side porch and kitchen sections were added), that second bump-out on the top was also put in. But I don’t know! I’d love to find an old picture of the house from this angle. 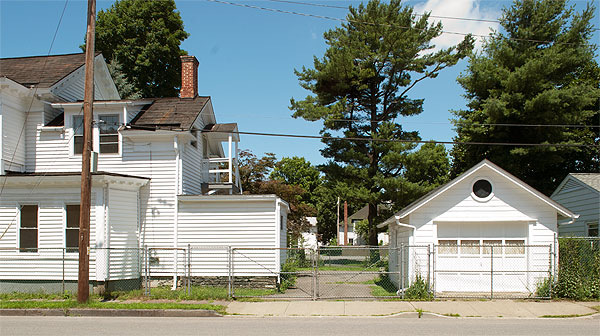 There’s a garage! Crazy. We can’t actually get in to the garage from the street because of the fence (it doesn’t appear to open in front of the garage door!), but eventually I’d love to set up a little workshop space in the garage and use it as an actual garage. I have no idea if the garage is original to the property, but it is really old. Evidently when the house was on the market, some improvements were made to the garage (apparently it was falling down…yikes), but it seems very solid now. It even has a new roof! 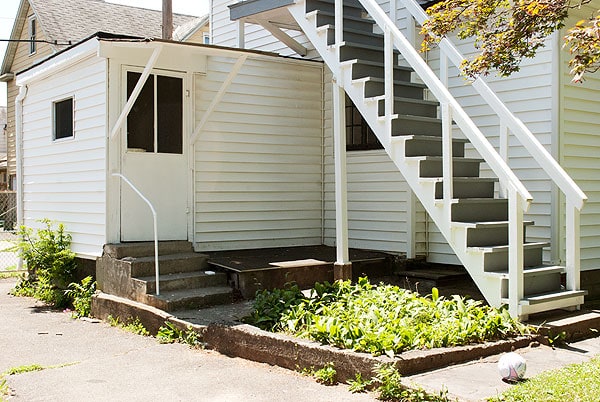 This is the mudroom from the outside. See how it’s weird and big? See how the window is tiny and strange? See how there’s that awful set of exterior stairs and that silly little flower bed? See how there’s a huge weed/tree growing from the crawlspace underneath?

Oy vey. I don’t know. SOMEDAY (most used word in the post?), I actually think it would be nice to shrink the mudroom by about half the depth, move the door to face the garage, and then put a set of stairs up to it on the wall where there’s currently that tiny window. Does that make any sense? As it is, the mudroom is silly-huge (about 9′ x 10′) and just looks like such a janky little add-on. 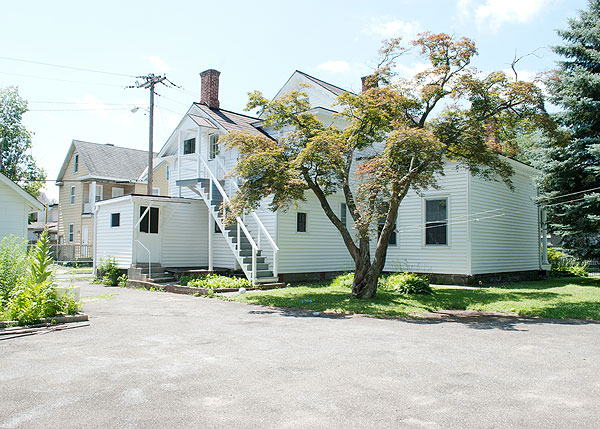 This picture is taken from the back corner of the yard. Those steps to the second floor! I want them to disappear. I’m sure they were required by code when the house was two units, but since we’re converting it, I’m guessing it will be OK to take them out. Obviously we’ll make sure and permit properly and all that…when the time comes.

That big tree (some type of maple? maybe?) is really nice, but unfortunately it’s kind of rotted at the base and probably needs to be removed. This makes me a little sad.

So. The asphalt. BEHOLD: 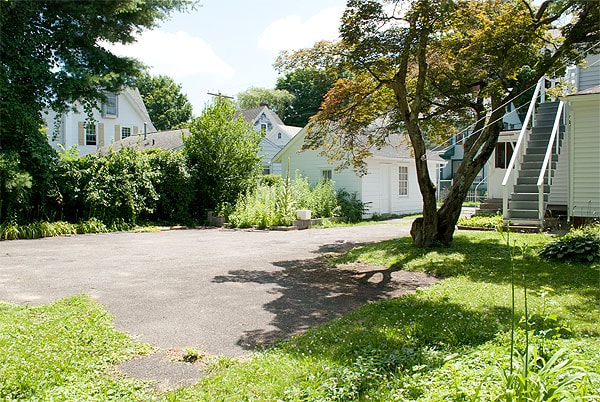 Remember that thing I said about the house being covered in snow when we saw it the first time? Amazing what a foot of snow will make disappear. Apparently, between making the house into two units and owning several cars, the previous owner decided that paving, like, half the yard was a great plan. We’ll definitely come up with a whole landscaping plan before totally getting rid of it, but I’m pretty sure it all has to go. How hard is it to use a jackhammer? Honest question.

You can kind of tell in this picture that on the backside of the garage, there’s a pretty sizable flower bed made of cinderblocks. I call it our weed garden! For the sake of our verrrrry preliminary attempts at landscaping, I think it would be worthwhile to clean this planting bed up, pull all the weeds, and maybe plant some veggies or something in it. Right now, it’s crazzzzzy. Some of those weeds are taller than me.

There’s a small strip of land on the outer edge of the garage, too (about 5 feet), which is also completely overrun by weeds. I think I’d like to put gravel in this area and put a compost bin back there. 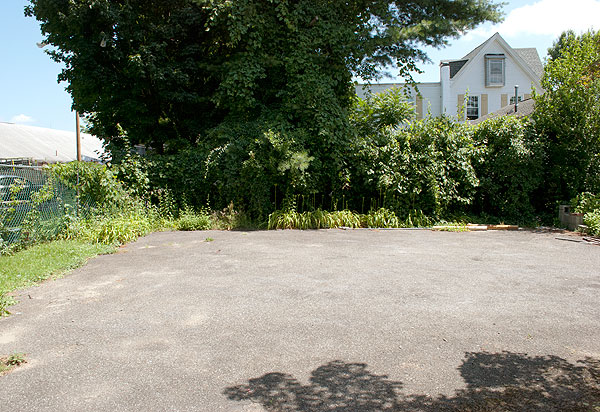 That back fence is like a crazy jungle nightmare mess. I did a little exploring and found that there are actually a few nice-looking bushes/trees hiding in all of that, along with a bunch of daylilies bordering the pavement. That neighbor also has a wood fence, which is nice for privacy, so I’m kind of anxious to at least get this area a little cleaned up. 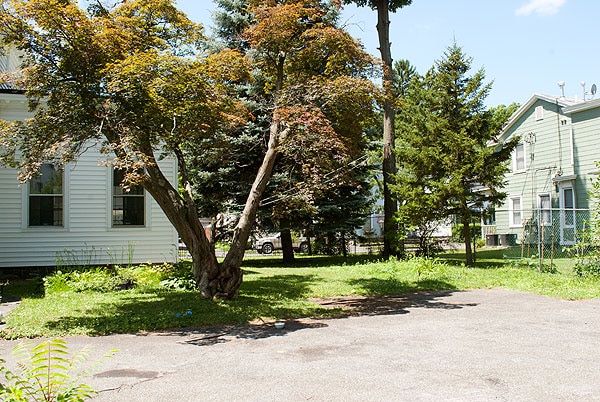 Finally, some grass! Once we’re able to replace the chain-link fence, I’d like to plant some more privacy trees lining the fence to the right (behind that green house is a very low-traffic commercial business, which would be nice to block out a little bit!), then probably reserve a lot of this area for grass. The whole reason we were so excited to have so much yard is because it gives Mekko enough space to get her ya-yas out, and I’m sure she’d appreciate not running all over asphalt. Although she also doesn’t seem to mind at all. 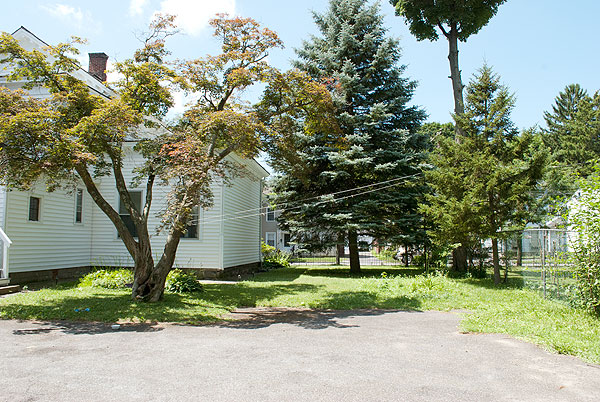 The side of the house is where the best part of the yard is——just some grass and that big tree. The house doesn’t have a dryer, hence the clothesline. I’ve never made a habit of air-drying my laundry, but I have to say, it really works! Everything smells good and dries fast and it’s kind of awesome. We definitely want to get a dryer, but it’s kind of nice that this option is here, at least as long as we have the tree. 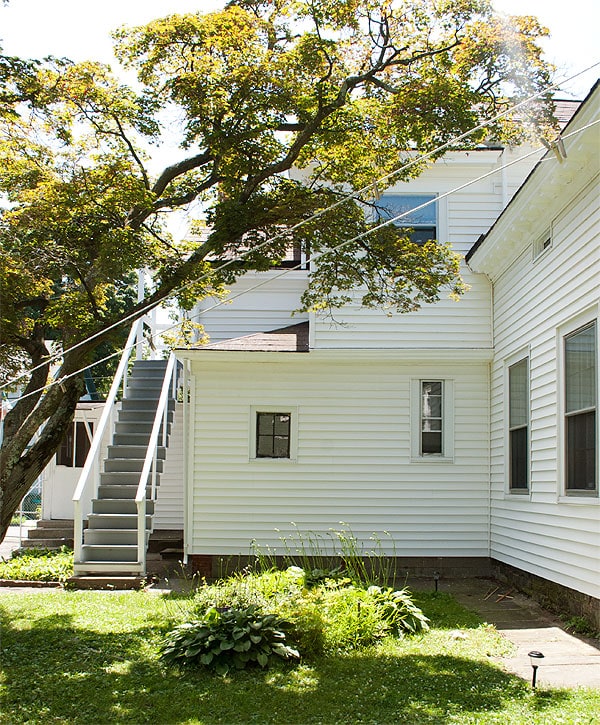 The window on the left is the laundry room, right is the bathroom, and far left are the big living room windows. Sorry if you’re so lost!

But look! Somebody had a little garden here at one point. And a huge affinity for Hosta. Hosta and day lilies is how this yard was landscaped. Definitely room for a little more diversity.

The little slate path bordering the house is super cute. Max bought those little solar-powered outdoor lights for a few dollars a piece, and they actually make a big difference to the look and feel of the yard at night. They work really well, too. 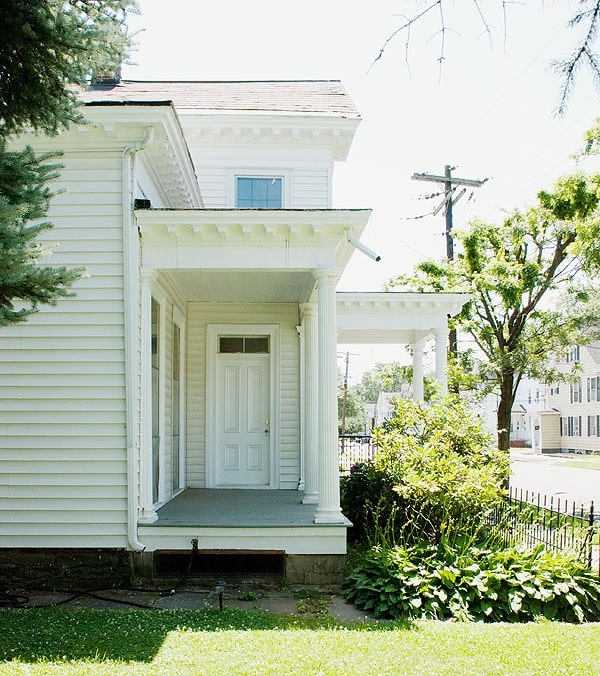 Back at the front of the house is the porch. I love the porch! We need to get some furniture or something for it, but it’ll be nice to hang out on. The people in our neighborhood have been very friendly and social, so it’ll be nice to sit out there and chat with everyone. There are some nice plants in front of the porch. A couple of them are a little too big and overpowering, but we might be able to prune them back or relocate and replace with something else, too.

I know this yard (and the exterior, generally) are going to take a ton of work and a lot of upkeep and maintenance and a future full of back-breaking labor and weird sunburns and probably an inadvertent brush with poison ivy (or several), but we’re so excited. Almost as excited as Mekko, who has eased into her role as Squirrel Patroller with all the tenacity and panache that Linus puts into sunbathing.