I know what you’re thinking after reading the title of this post: I should just quit everything and write clickbait pieces for BuzzFeed. Clearly I have a knack for it? Because who wouldn’t want to read about the super-specific topic of how to address the upper portion of the back of my house by pooling an excessive number of examples and generally obsessing a stupid amount over the handling of this one architectural detail? 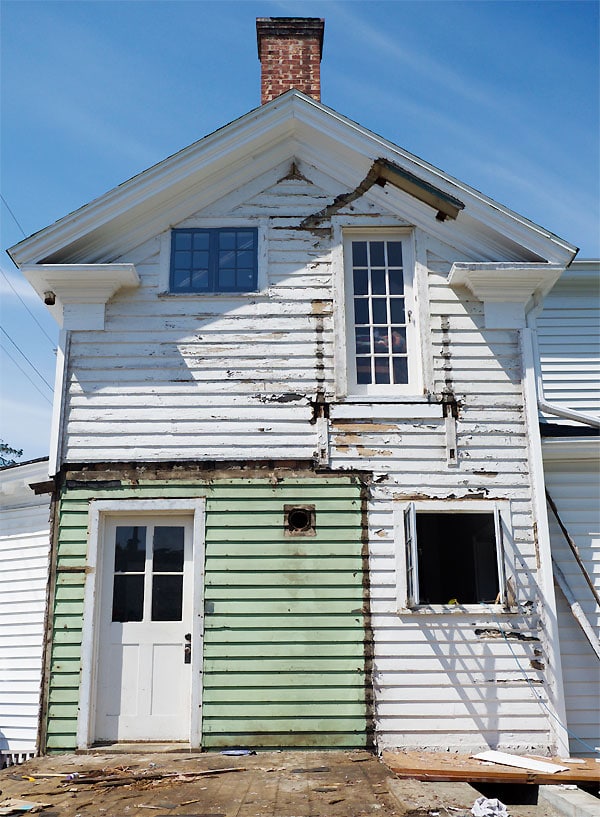 A few weeks ago I posted this disastrous photo of the back of my house after the walls and roof of the mudroom were demolished and the vinyl siding was removed to expose the original clapboard. Like…damn. I won’t even pretend that I’m not a little intimidated by this picture. Winter is around the corner and I gotta get this put back together—stat!

A big debate ensued in the comments about how to deal with the second story of this bad boy. Originally I was planning to build a covered porch on the first floor with a balcony above it on the second floor, so you could walk out that funny door to nowhere (where there used to be a fire escape when the house was divided into two units) and lounge around high in the air, feeling fancy. That door and window arrangement always felt kind of…off…but once the vinyl siding was removed it all started to look especially bad. The door and window were both almost certainly later additions to this structure, and seeing how they both cut into the raking frieze (the flat board at the base of the cornice that the clapboard terminates into) makes that very apparent. Unlike the front part of the house, where there are two full levels and an attic, the second floor on this section I think qualifies as a half-story—not an attic but not a full story with an attic above either.

So anyway. I’ve nixed the balcony. Officially, that idea is dead. Everybody forget about it. I’m not mourning it for the following reasons:

So now that that’s off the table, what do I do back here? A lot of people suggested one larger window in the center, but the issue with that is that there’s a chimney that runs up the center of this wall! Currently, the chimney doesn’t do anything. I suppose someday somebody might decide to have it lined and made functional again, but in all honesty that will probably never be me. Without an existing function, a lot of people also suggested demolishing the chimney, patching the roof, and then putting a window in the middle of the wall.

I see the logic of that—really, I do—but I feel strongly that the chimney stay put. I’ve mentioned this here and there before, but my house actually had a third chimney when I bought it that I decided fairly early on to demolish. It was also functionally obsolete, but mainly I removed it because it was structurally unstable and causing roof damage, and its position essentially eliminated the option of ever finishing the attic, and so the pay-off of removing it just outweighed whatever superficial charm it added to the house. This chimney, though? It ain’t bothering anyone! I think the exposed part of it above the roofline is really pretty, sure, but it also feels like an interesting part of the history of the house and of Kingston. The base of this chimney is actually a wood-burning fireplace in the basement—presumably because that was the original kitchen of the house—and then it’s set up for a wood stove in the kitchen (not sure if the upstairs room would have also had a wood stove…) and I guess a wood stove outside the kitchen for cooking in the summer. Cool, right? The bricks that this chimney is constructed out of were manufactured by the Hutton Brick Company, which was founded around 1865 and became one of the biggest brick manufacturers in the Hudson Valley, and a big part of the economic and social history of Kingston.

ANYWAY. I think losing the chimney would be sad. I see people tear down defunct chimneys every now and then and I often feel like it doesn’t do the house any favors aesthetically. Obviously I’ve been on both sides of the fence on this one and not all old chimneys are created equal, but in general I much prefer to see them remain intact!

So the option, I think, is either no windows or little windows! Once this conundrum got on my radar, it quickly became something I was laser-focused on when walking or driving around town. Does that happen to you? I never gave any thought to this topic for like 25 reasonably functional years of life but now it takes up a lot of my precious attention. 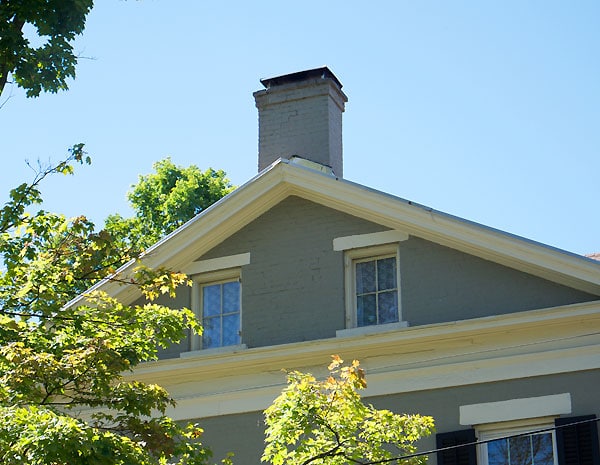 Look at those cuties! This is actually the same house that has the nice hosta hedge. The house itself appears to have replacement windows but I’m assuming the originals were six-over-six double-hungs, like mine. Those little attic windows are casement windows that open into the attic on hinges, pretty sure. You can also kind of see the original shutter hinges still up there, too! I love tiny shutters. So cute. 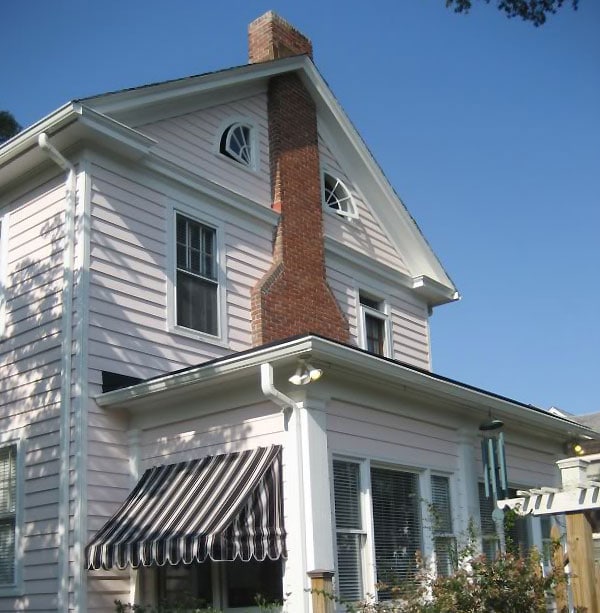 This is a Sears house in Norfolk, Virginia that I found on the google machine, not in Kingston, and it’s from the 1920s not the 1860s, but…quarter-round windows! Ugh, so damn charming. My house has a half-round attic window on the front, so I keep wondering whether quarter-rounds would be the way to go on the back. I don’t know what was here originally and I kind of doubt I ever will, but for a couple weeks I was really fixated on the quarter-round idea. 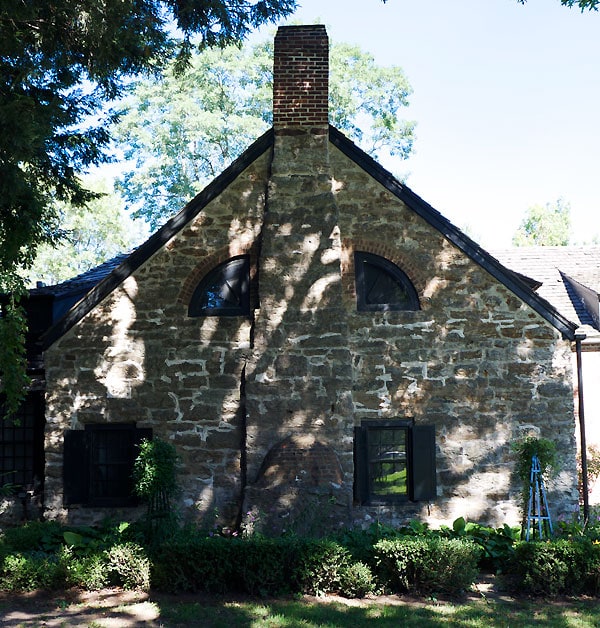 As to whether they’re appropriate to the age/style of my house…I’m not totally sure! What I can say is that I’ve definitely seen examples spanning many decades. This one is the Senate House in Uptown Kingston—where the first New York senate met for a period during the Revolutionary War. The history of these old Dutch stone houses is complicated because they were mostly burned by the British in the war—in general just leaving behind an exterior shell—so it’s possible that the quarter-round windows weren’t installed until the shell was renovated circa 1800-ish…but anyway. 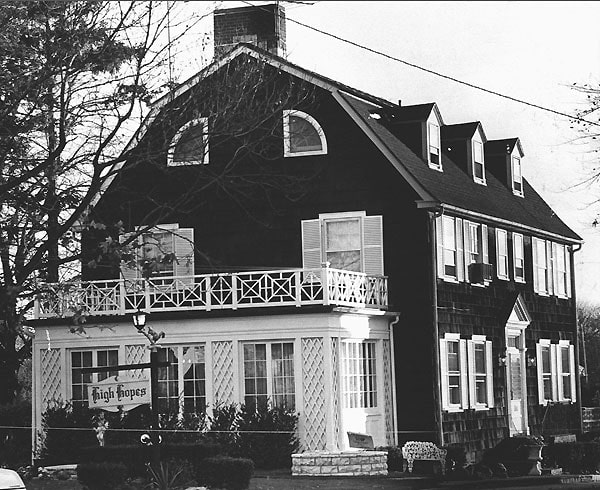 The idea of quarter-round windows is/was also really appealing because everybody immediately associates them with the Amityville Horror house, I’ve learned from now boring way too many people with this debate. I’m so fun to hang out with. 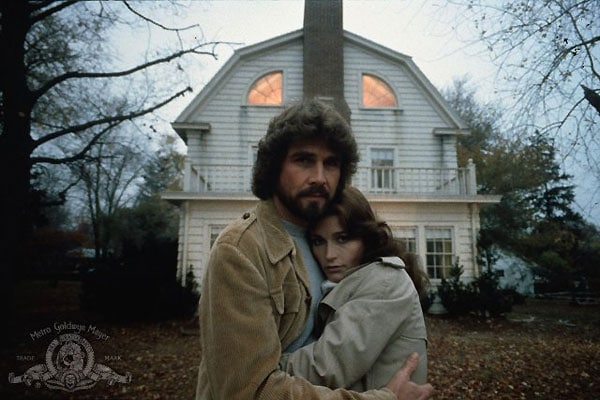 In working on this post I found out that the Amityville house used in the exterior shots of the original 1979 movie is actually not the real house, but a similar Dutch colonial-style also with the distinct quarter-round attic windows. I’m guessing these were installed specifically for the movie just because they seem so over-scaled for the house itself and in relation to the other windows, but what do I know. 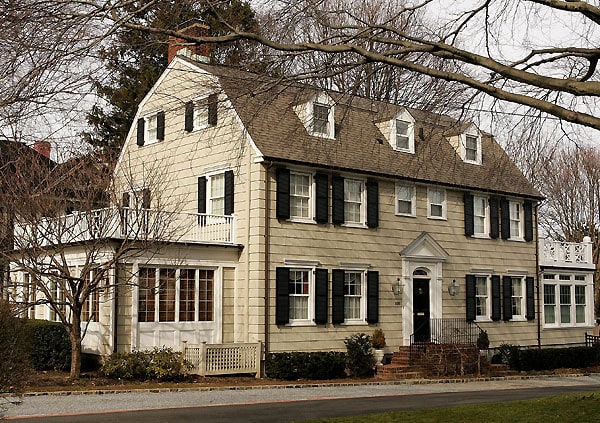 This is the real Amityville Horror house again as it looked a few years ago, and just adding to this complicated quarter-round vs. rectangular debate that maybe isn’t really even a debate? The quarter-round windows were nixed during a renovation and replaced with little rectangular ones! I think this probably had to do with the occupants getting tired of the house being so recognizable, so they changed one of the most distinctive features. Crazy! I gotta say I think those little teeny double-hungs look perfectly good though. I ain’t whining about it. 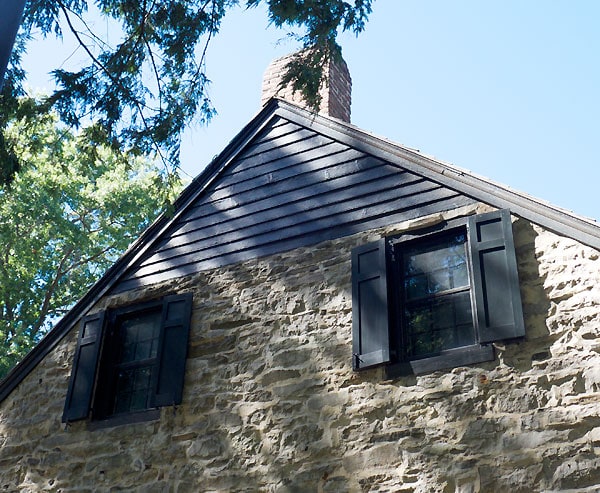 Oh yeah, and the Senate House with the quarter-rounds on one side? Also has double-hungs on one of the other sides. Thanks for nothing stupid Senate House. 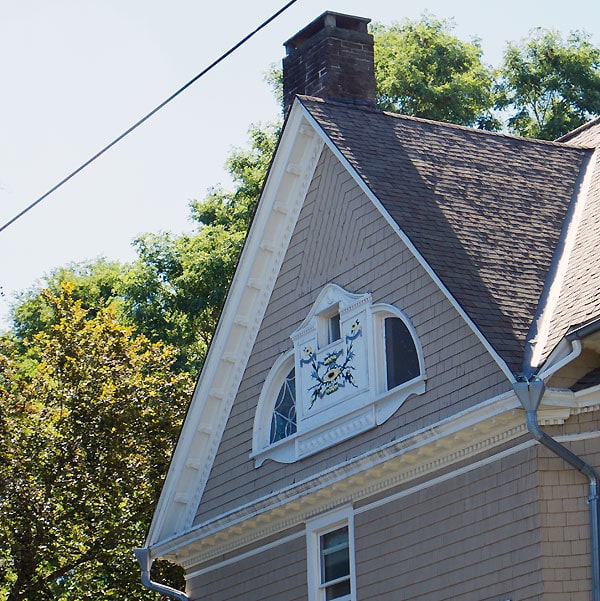 Are we so bored yet? Check out the crazy situation on this nearby Victorian! This entire house is bananas, but MOST IMPORTANTLY (to me) is that they have the pitched roof, the chimney, quarter-round windows, and a little teeny rectangular window in the middle! You see this every now and then around here—chimneys where the flue splits to allow for a window right in the middle of where the chimney would be. It’s so funny! Victorians were crazy. 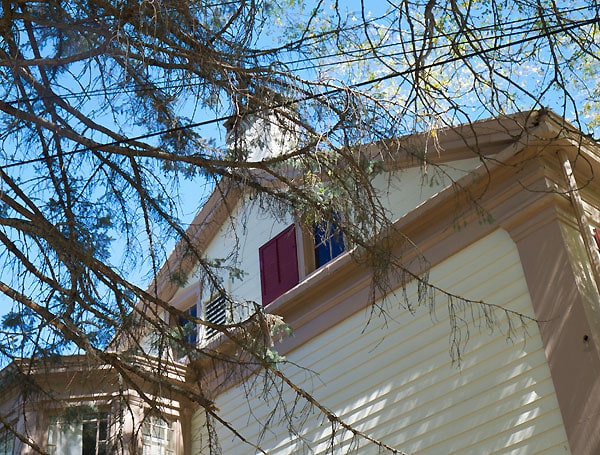 This picture is clearly terrible but the house is a little closer to mine style-wise, and those windows are rectangular casements, just like the first example. It’s also a distinct attic space, not a half-story, but you get the idea. 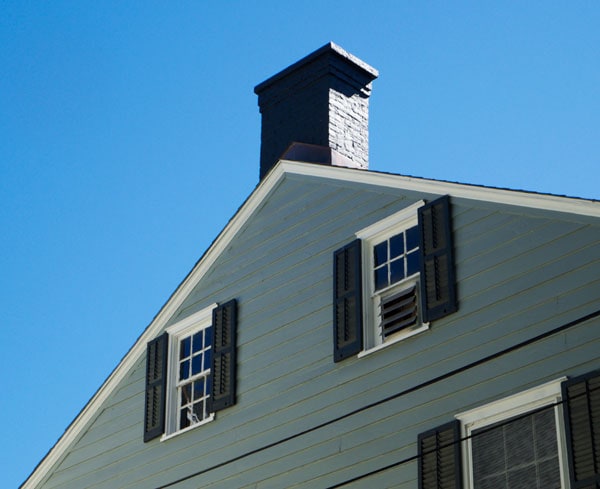 I love the little six-over-six double hungs. Like dollhouse windows. 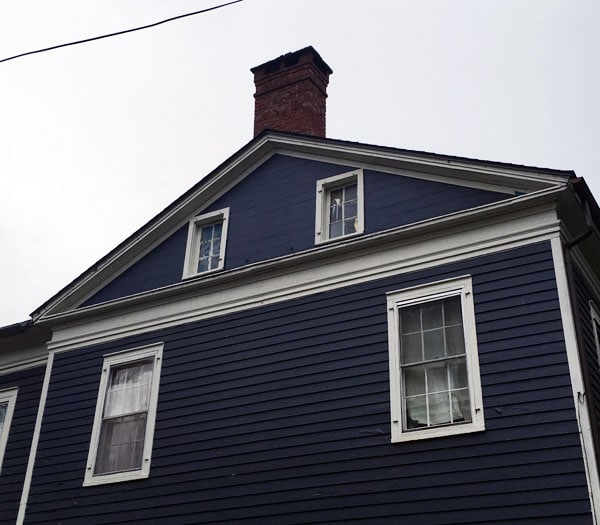 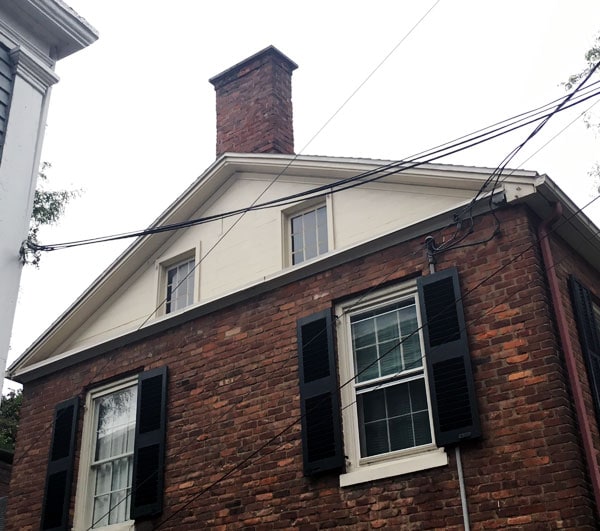 Andddd, back to casements. These two houses are a few blocks from mine and about a block from each other, and I’m guessing they were built around the same time. I’m told that the house in the bottom picture is actually a wood framed house with a brick veneer, which is neither here nor there but kind of cool so I feel compelled to repeat it here.

The common thread I’m noticing with the casement windows is that they appear to be at the upper limit of size—the outer top corners of the surrounding trim just barely miss the raking frieze. I also find it interesting that the window style and divided light patterns aren’t necessarily mimicked by the rest of the windows on the house—like the dark blue house is almost like if you shrunk one of the six-pane sashes and turned it sideways, but the brick veneer house has nine-pane casements and six-over-six double-hungs everywhere else.

If anybody on earth is still reading…what did we learn? I don’t even know, but I feel like this is all sort of good news because maybe there isn’t just one single correct answer but a few acceptable responses that will all look OK. This comforts me. So I guess here’s what I’m thinking…

In case you’re concerned about the small size of the windows, that room has two large dormer windows on the street-facing side, so I think it’ll all be fine in terms of natural light, and I feel like the little windows will make the room feel sort of sweet and quaint and charming when you’re inside it. I’m looping in my contractor/BFF/sexual harassment target, Edwin, for this one because I’m guessing we’re going to end up re-siding the top half of the entire wall, which will undoubtably be intense and terrifying as it’s happening. At least it should make for an interesting blog post? I’m scared. 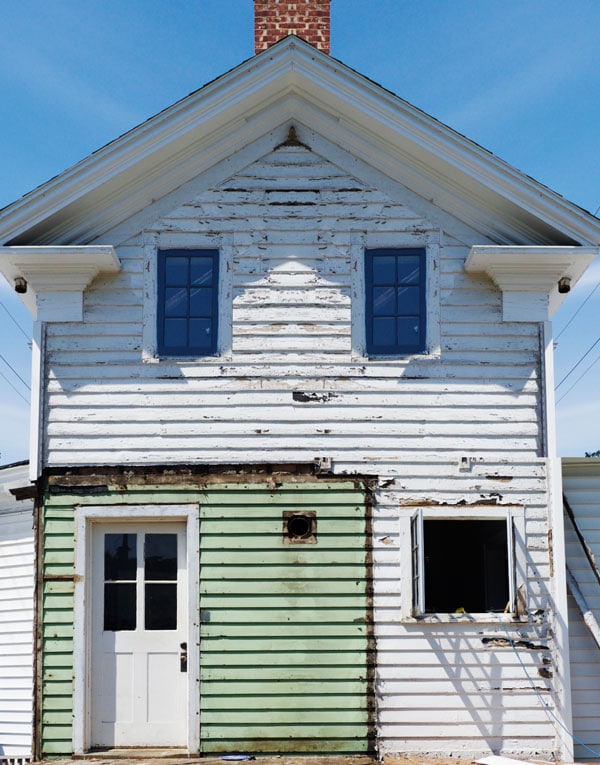 I’m bad at photoshop, but here’s a rough approximation of how things could look. Except I may have already changed my mind already—this is actually approximating how the sashes from the kitchen window would work, which are about 6 inches longer and an inch wider than the ones upstairs. So NOW I’M THINKING (hear me out…):

OK, carry on. Ignore me.