In my last post, I talked about renovating the back wall of my house to bring my window and door locations (fenestration, if you wanna get fancy!) into alignment with the stupid kitchen I designed, which just requires a few simple changes to every possible thing imaginable about my house.

You may have thought that getting this essential work completed(ish) would mean that NOW, FINALLY, AT LONG LAST, we are ready to dive into all things kitchen! Particularly because you know I’m liable to change my mind again and throw my life into total chaos for an indeterminate amount of time at the smallest inkling of a better idea.

Just kidding, I’M NOT DOING THAT BAD THING ANYMORE. I’M JUST TRYING TO GET MY LIFE BACK TOGETHER NOW OK? Moratorium on all ideas, please.

Also, I literally posted those kitchen plans a year ago dear god what is my life.

The problem is one that I gestured toward in my last post, which now we will really dive into: to make way for The Kitchen, I’ve had to make some sacrifices. Namely, my first kitchen renovation, my pantry renovation, having a sink on the main level of my house, my sanity, the concept of “free time,” and last but not least…my laundry room. That last one stung, because back in 2014 I’d already turned it from this: 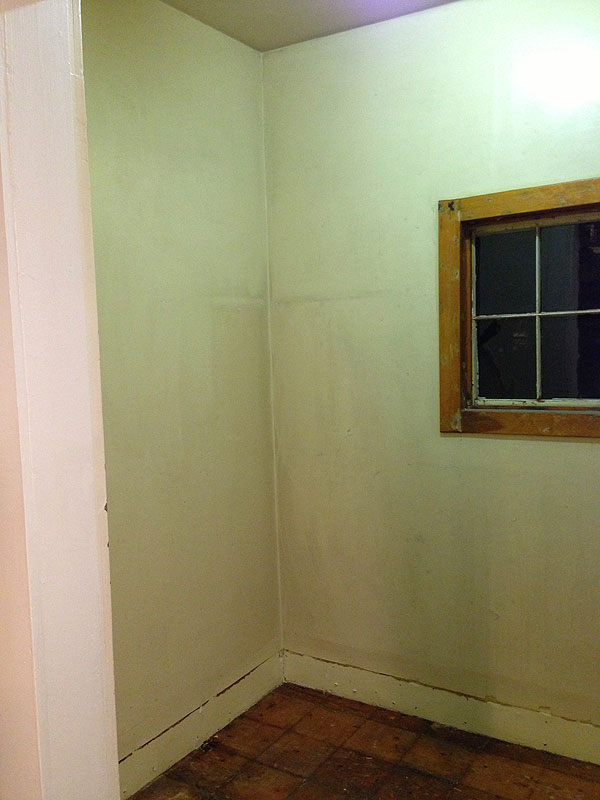 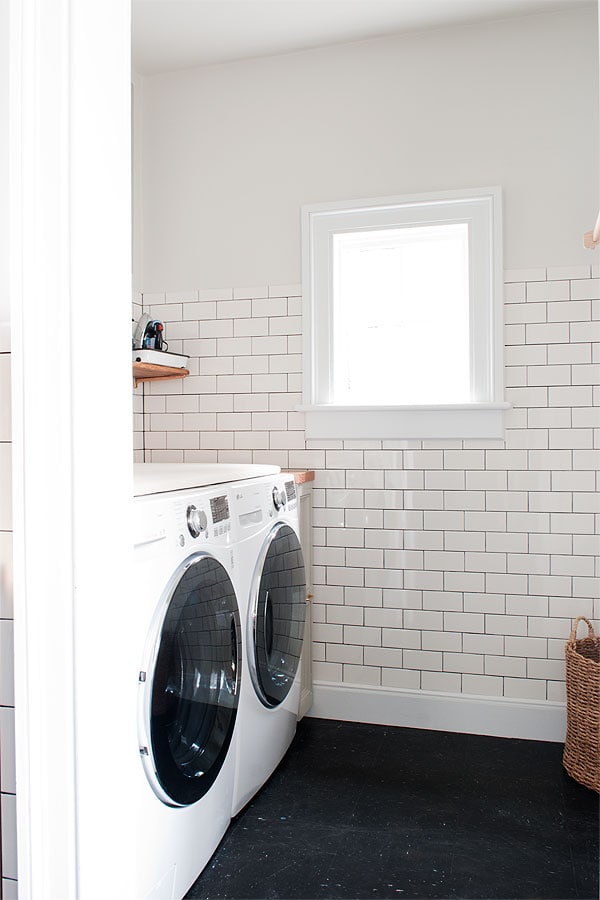 I’ll give you a moment to get over the absurdity of this. I’m still working my way through it.

Here’s the thing, though, and I actually think it’s kind of normal: the longer you live in a house (and more secure you feel about staying there), plans change as new ideas emerge, potentials reveal themselves, and you develop a better handle on what it’s actually like to live there. I moved to this house from a 5th floor walk-up in Brooklyn where the closest laundry machines were 3 blocks away, so having a laundry facility in my house at all felt like an enormous luxury, and there was a whole little tiny room off the kitchen just for that very purpose! At the time, I don’t even remember considering relocating it to a different spot, so I renovated the laundry room.

I loved that laundry room. It was small but had almost everything I needed, and truth be told I did a really nice job on the moldings and the tile. The tiling job in the kitchen was passable, but the laundry room was perfect. 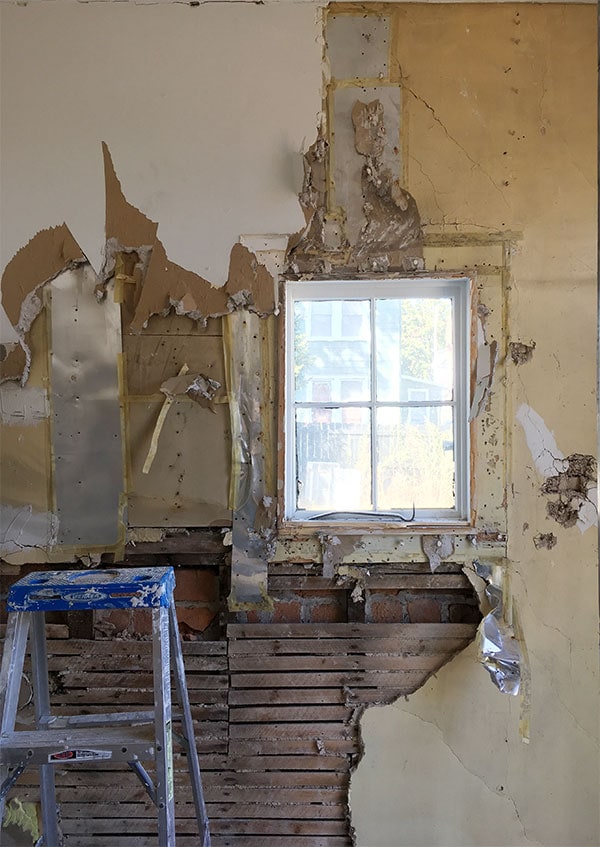 So naturally I destroyed it. More specifically, I enlisted Edwin and Edgar to handle the demo, because I couldn’t face it. Let’s try to justify what the fuck I just did with a few semi-valid points:

If you remain unswayed, I simply cannot help you. I’ve done my best.

I decided, in order to make myself feel not-crazy, that the new laundry room couldn’t just be new but also had to be improved. Want a slop sink? Let’s get a slop sink in there. Want it on the same level as the bedrooms? Let’s make that happen. Want a little more space for other cleaning accoutrement? We got that too.

(I don’t know who “we” and “let’s” refers to, except it makes me feel less alone to phrase things this way.)

There was plenty of internal debate about the location of this new and improved laundry haven, but I’ll spare you the details. There aren’t that many options, let’s be real. And the best one was…my office. Which I had already renovated from this: 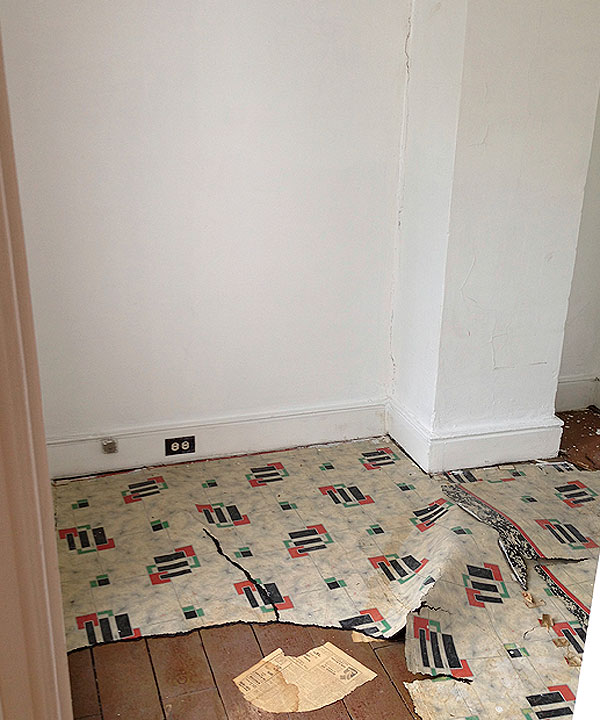 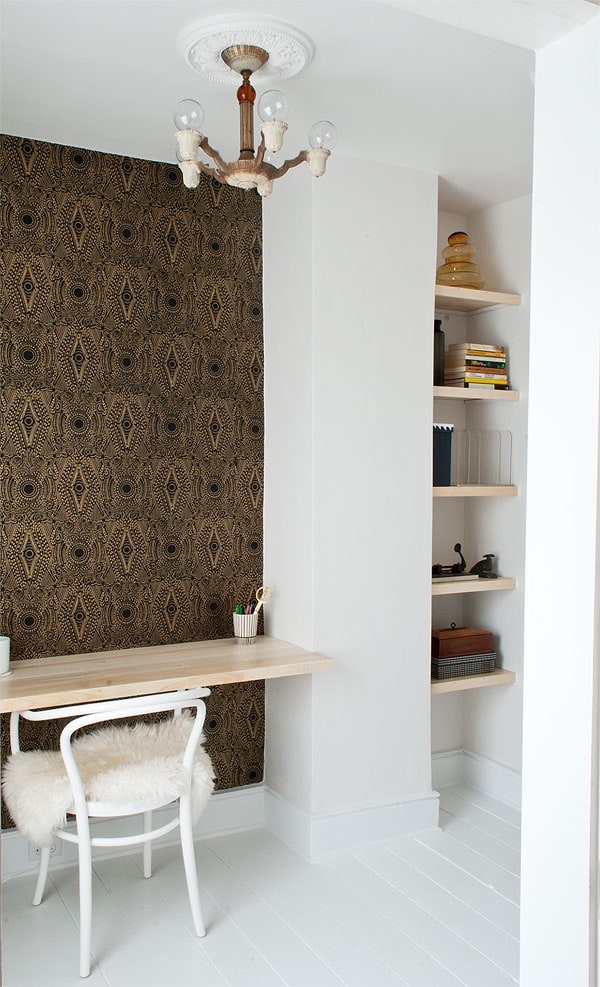 Take another moment to peel your palm off your face. I’ll do the same! We all ready? OK.

I had a wee little office upstairs that I stuck in a sweet bright room. It was nice and I enjoyed it.

Naturally, this too I destroyed. But less than the former-laundry-room—no reason to gut this space! As before, let’s dive into some of the reasoning that led me here:

Guess what. It’s still a nice room, but now all the other rooms are nice, too! Or on their way. This is very exciting for me. So as much as dismantling another space I’d already “done” sucked, there’s a real victory in there…somewhere…of loosening up about this particular space because other rooms finally feel way nicer than this little glorified closet. It has a higher calling and that calling is washing my undies.

SO. It has been decided. Someday this will all be for the best. Now it has to happen. And it has to happen in a very specific way, because this cannot become a thing. NOT RIGHT NOW, I HAVE A KITCHEN TO ATTEND TO. This is what I need out of this laundry room renovation: 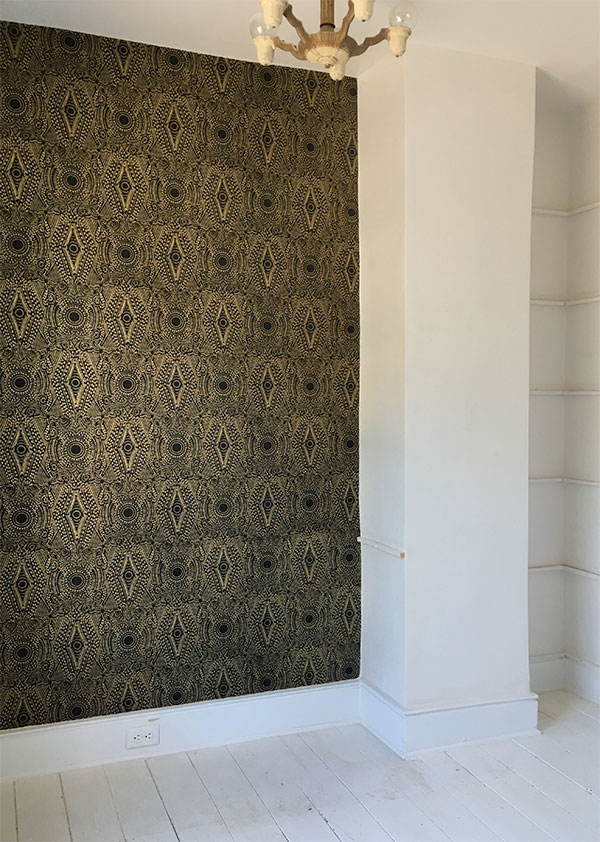 While the walls and floor were still in good shape (well, nothing a fresh coat of paint couldn’t fix) from my previous renovation work, there was a major obstacle: the chimney. This chimney seemed to be causing structural damage to my roof, so it was demolished below the roofline when the roof was redone back in 2013. Some time later, I demolished it further down to the attic floor. And now, I had a choice to make: leave it or demolish it all the way down to the basement floor—three stories of chimney.

For some reason, I wrestled with this decision FOR. EVER. The chimney is totally defunct. It protrudes into the room and sits where, ideally, the dryer goes. The only way to fit two machines and a utility sink into this room is for the chimney to go, and I really wanted that goddamn sink. AND YET…I hate ripping original stuff out (even if it sometimes seems like I do with wild abandon, I really try not to!), and what if someday I wanted to expose the brick?? Or use the chimney to vent…something? Or have it rebuilt from the attic floor up? This literally kept me up at night.

Hold up. I have nothing to vent. I have no reason to rebuild the chimney from the attic floor, and certainly not the money. I’m not even into exposing brick chimneys like this—I think 99% of the time it looks stupid. HOW’S THAT FOR A HOT TAKE. Come at me.

Demolishing the chimney had the enormous added advantage of being able to use the remaining void as a chase for all the plumbing and electrical, without losing any space in the small dining room closet below. I realize you’d have to be pretty intimately familiar with the layout of my house for this to make any sense, so don’t worry about it.

But also…ugh. That’s so many bricks to haul out of the house. It sounded like the worst possible way to spend a weekend, so instead Edwin and Edgar and I did it together one morning during that week we were working on the back of the house. It wasn’t so bad with three people. Now the chimney is in a pile in the backyard, where I’ll have to sort through it this spring to salvage what I can and dispose of the rest. That’ll be a terrible time. Let’s not think about it yet. 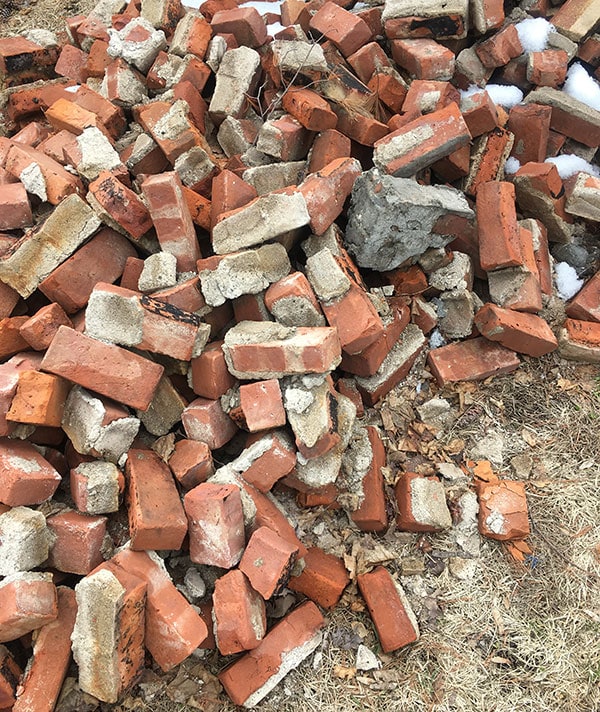 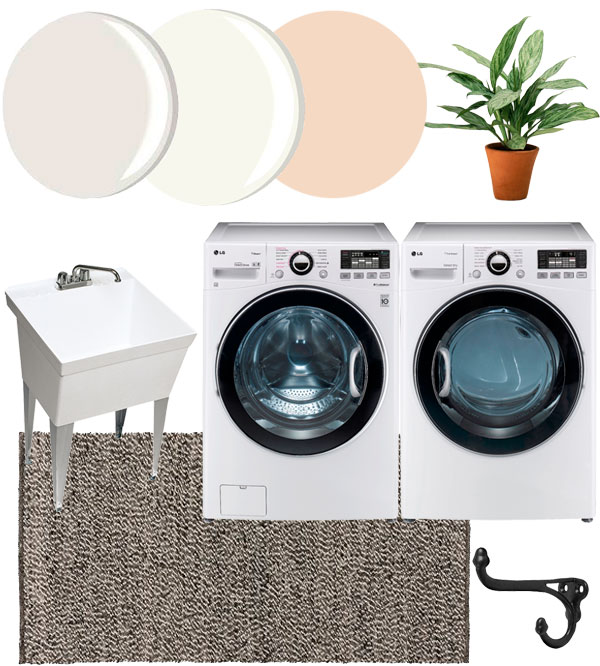 Literally, this is the plan. Hey—there’s a plant OK?! I made the mood board a) so I’d have a way to end this post and b) to drive home the point that WE ARE NOT GETTING CARRIED AWAY HERE. I can dream really big but I’m forcing myself to dream small. See that rug? Discontinued from IKEA and I already own it. See that sink? It’s plastic and $95 at Lowes with a $23 faucet. THAT is the vibe. Functional and good enough with as few new purchases as possible.