If you were unfortunate enough to catch my last post, you will be relieved to know that I started work on my bathroom! Even though I keep talking about this as a “small” renovation, a “light refresh,” a “quick and cheap fix,” I’m not sure this room has any truly quick fixes. You’ve seen it. It’s rough. As a result, the entire house has been thrown into total chaos and immediate disarray. This phenomenon seems to happen every time, and each time I regard it with a renewed sense of wonder. It doesn’t seem like this task would require every tool and supply I’ve ever owned, and yet…all the DIY paraphernalia now scattered around the upstairs begs to differ.

I think the lesson broadly might be that bathrooms are no joke, especially if you only have one. They just involve more than, say, a bedroom, plus they’re small which makes the work awkward and uncomfortable. When you’re working on a living space, it’s easy enough to just avoid living in that space until the work is done…but it is not easy to avoid going to the bathroom. I, for one, typically have to do it several times a day. Which is why I’m definitely glad I’m not gutting this bathroom right now, and also already cannot wait for this to be over. Ha! 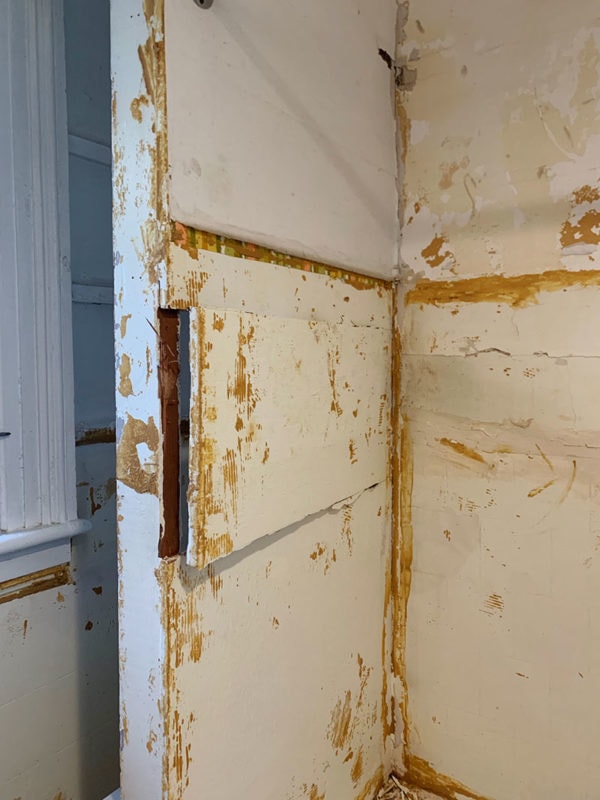 GOOD. BYE. FORMICA. You have served valiantly as the shower surround but it is time for you to depart. I got lots and lots of helpful suggestions for the bathroom after my last post (thank you!!! y’all are smart.), which ranged from “try to work with the Formica!” to “OMG KILL IT WITH FIRE,” and I fell more into that latter camp. It was barely clinging to the walls so taking it down was a no-brainer.

Next, I had to get rid of that dumb wall at the end of the tub. “Had to” is strong wording—I wanted to. REALLY wanted to. If the bathroom were a littttttttle bit wider, it probably would have made more sense to keep, but that space it created was just so narrow and deep and awkward and dark and skeevy, I just wanted it gone. The wall was built whenever this tub was put in, and the side facing into the shower was made up of scraps of plywood which were then skim-coated in joint compound and then covered in Formica. Fancy! 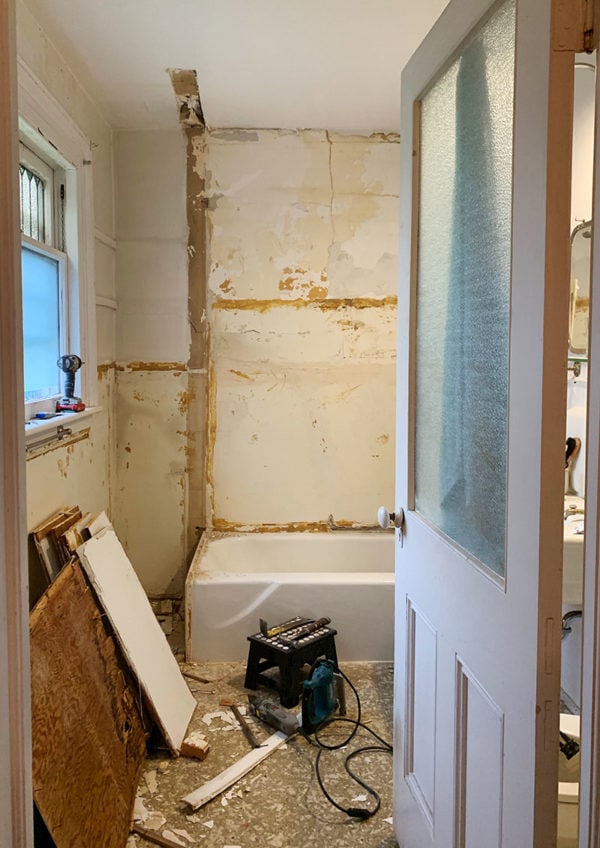 IS IT BEAUTIFUL YET? Yikes. The plaster walls under the Formica are luckily in very good condition, all things considered.

By the way, while we’re taking in this spa-like view, several of you suggested/insisted on changing the swing of the door, and you know what? You’re absolutely right! I even noted the awkward swing of the door 6 years ago when first writing about this bathroom, but completely forgot it bothered me over the course of the intervening years. It’s funny how you just get used to things. But now that it’s been brought to my attention again, it’s all I can think about…add it to the list. 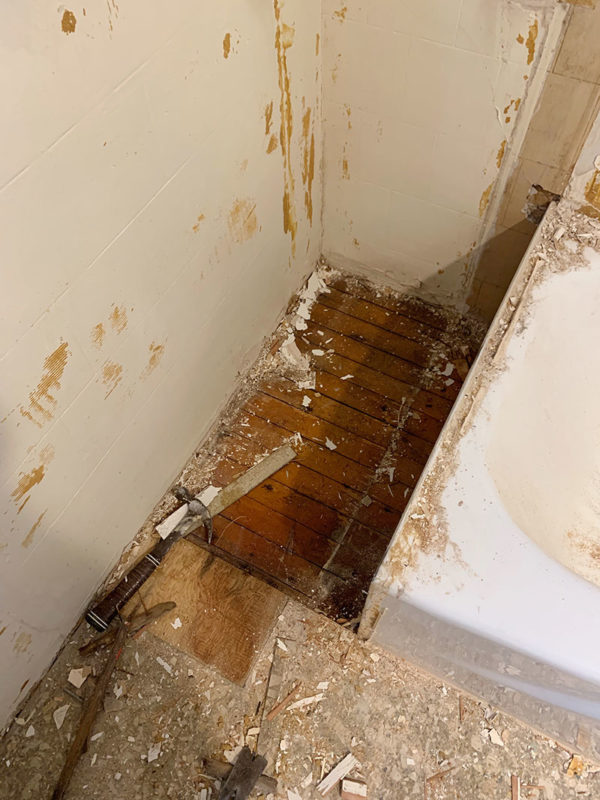 WELL, WELL, WELL, WHAT HAVE WE HERE? Removing the wall at the end of the tub allowed me to see under the tub for the first time, and I saw wood floors! And not, like, wide and gappy and soft wood subfloors that I can see from below, but nice finished hardwood. It also allowed me to see that these hardwood floors were residing under only one thin layer of plywood subfloor and vinyl tile, not the several layers of mayhem I suspected I’d find. INTERESTING. 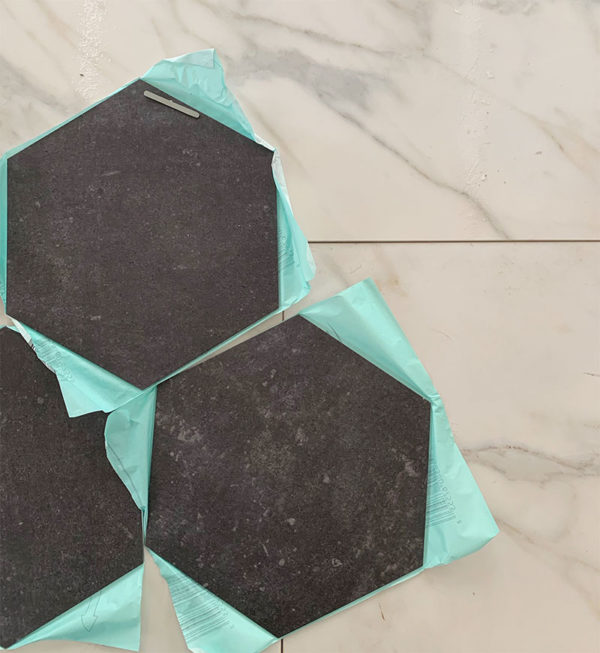 So, I had PLANNED to just peel up the existing vinyl tiles, do whatever I needed to do to prep the plywood subfloors, and put down new peel-and-stick vinyl tiles. I’d found these Stainmaster black “obsidian” large-scale hex tiles at Lowe’s, which seemed like they’d be fast and affordable at about $2/square foot, and they’re cute! It’s nice to see something different than 12″x12″ vinyl—AND, these are GROUTABLE? What is this sorcery? The product shots in finished rooms look pretty great and I’d bought 5 boxes and was prepared and weirdly stoked to go for it.

Upon seeing the wood floors…I was still prepared to go for it? A glimpse of hardwood is not the same as seeing the whole room of hardwood, and someone probably covered them up for reason, like rot, that I don’t want to face. Plus, removing the plywood subfloor would entail temporarily removing that sink—or somehow just its legs, which rest on the floor—a prospect that strikes complete and utter fear into my heart.

I’m not sure I can stress this last point enough. The sink is super beautiful and old and theoretically valuable and fragile and I cannot and will not risk it for the purposes of this renovation. I don’t even really understand how it’s mounted, particularly the backsplash piece which I think might be mortared to the wall like a big tile. Someday, I will have to face this, I suppose. Today? Hell no. This is also why I didn’t even really consider tiling the floor with ceramic or porcelain tile because that would add thickness to the floor and necessitate removing and re-mounting the sink a little higher. There is seriously nothing in this world I would rather do less than fuck with that sink. 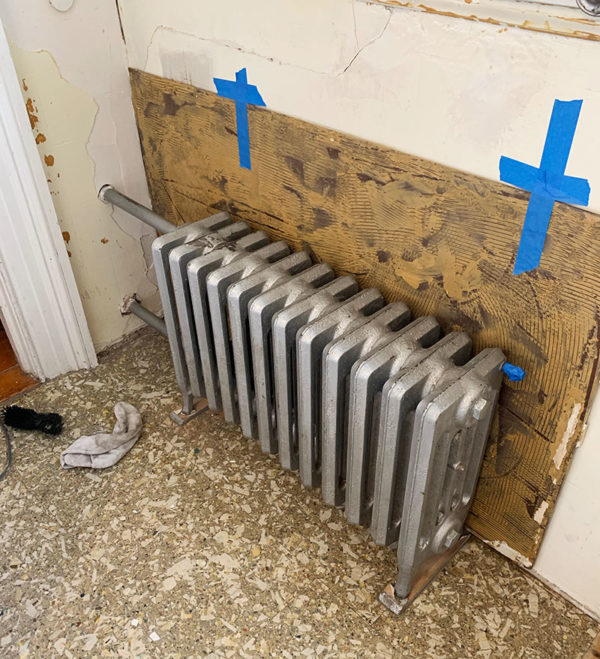 In addition to the sink, there’s also a radiator in the room and that presents kind of the same problem. It would be nice if radiators were easy to remove and put back on a whim, but it’s a pain and I wanted to avoid that as well.

So now I am not even one full day into this DIY event and at a crossroads that is causing IMMEASURABLE stress. I am not at all dramatic, why do you ask? 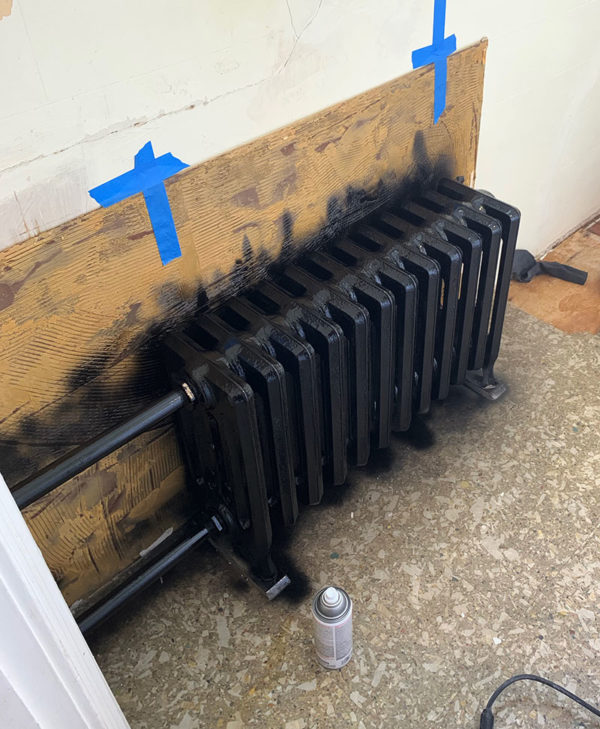 I changed course and spray-painted the radiator while I debated my options. I cleaned it well and then used Rust-Oleum’s High Heat Engine Enamel in gloss. Looking slick, radiator! 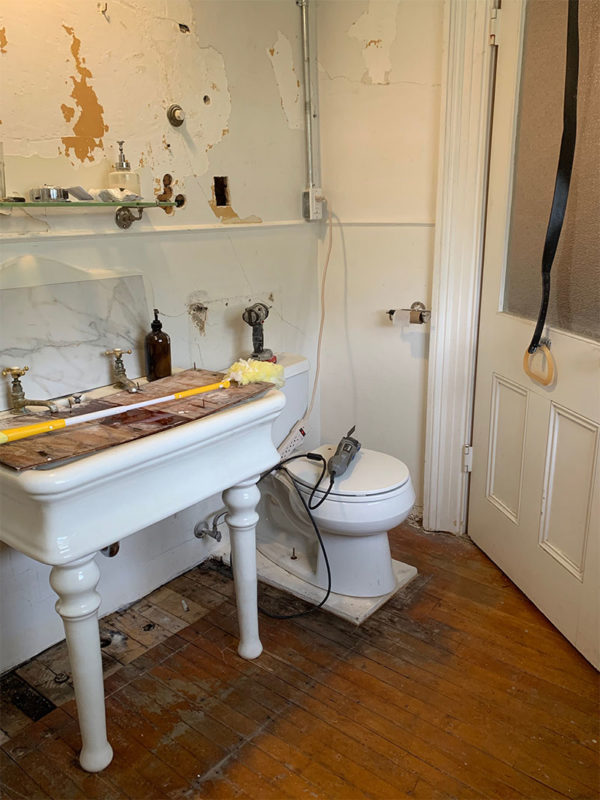 Don’t ask me how; I couldn’t tell you. But I got the floor out. Lots of careful cutting with my handy Dremel MultiMax MM50 to get the subfloor into pieces small enough to shimmy out from underneath the legs, which can be carefully maneuvered this way and that without the whole thing crashing down. It was intense. But everyone survived, most importantly the sink.

ANYWAY, floors!! For the most part, the floors were in pretty great shape. There was a little water damage near the toilet and a big patch where plumbing had been run behind the sink, but overall…I’ve seen much worse! 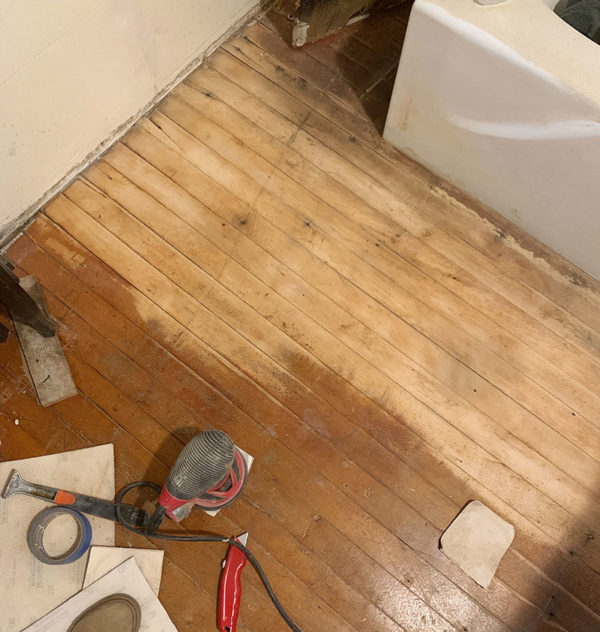 Then I started sanding them, and…what’s this?! The floors in my house are all yellow pine or fir—both very common wood types for flooring here—but I think these are…maple?! Huh! I almost never see maple floors in this region. Interesting!

By the way, even though I just refinished that little floor in my closet, I WAY underestimated the amount of sanding here. Maple is so much harder than pine. I found that if I hand-scraped the old finish (shellac, I think?) before sanding, it went a little faster and saved me from having to replace the sanding pads every 5 seconds, but it was still slow and kind of awful to do with just a little orbital sander. 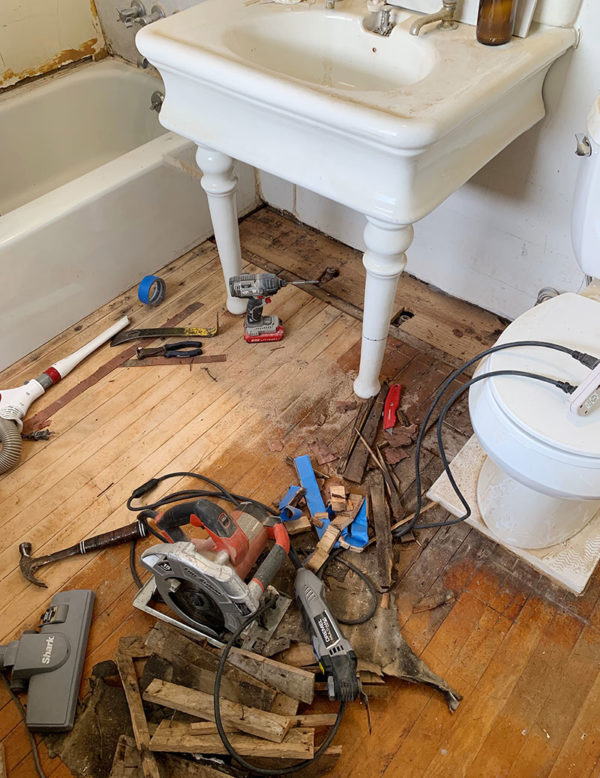 I took up the old patch behind the sink, which I think was made of shipping pallets? Super rough and uneven wood; not worth saving. 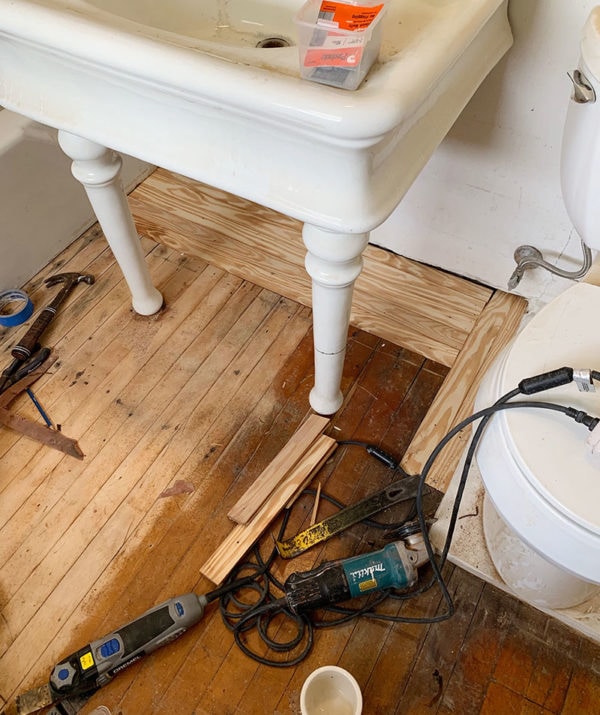 I didn’t have any maple, but I did have boards from the yellow pine patch that I pulled out of the living room when I installed the faux fireplace several years ago in there! The boards are the same width as the maple, and this floor is so full of “character” anyway that a conspicuous patch job doesn’t really bother me. I actually think it’s kind of charming?

So do you, admit it. 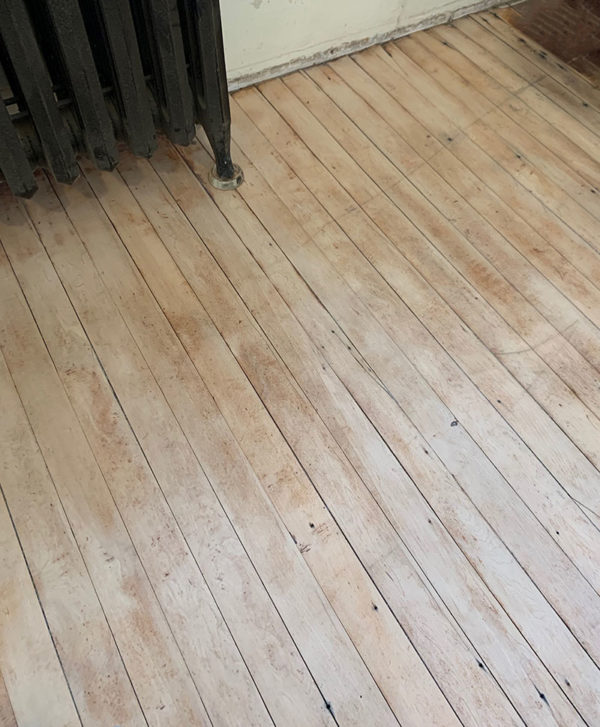 NOT BAD, RIGHT? I loved the light tone of the unfinished maple, so I used some leftover Bona NaturalSeal before applying poly. The NaturalSeal has a little bit of white pigment in it, which lets the wood maintain an unfinished look rather than darkening with polyurethane. Then I followed up with two coats of Bona Traffic HD in Satin, which I also had on hand in the basement. 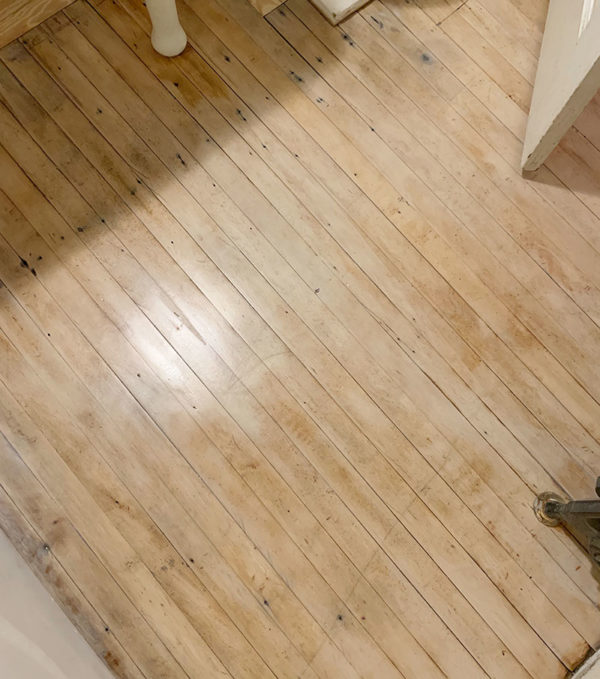 Oh HELLO, floors! I am very pleased. I know that wood floors aren’t everyone’s ideal for a bathroom, but I am more than happy to have these in here. Plus, aside from some sanding pads, they were free! I’m sure I will still have no problem spending my $1,000 budget, but being able to return the vinyl floor tile definitely helps. 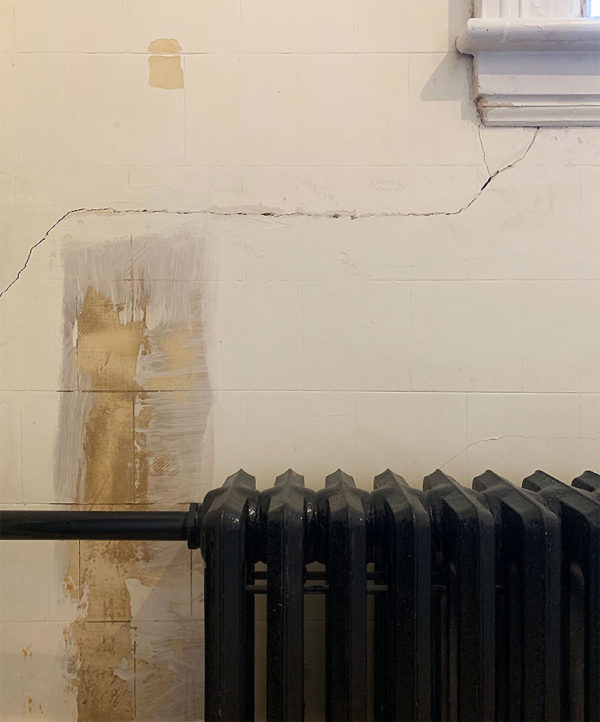 A couple more random and possibly interesting things about the bathroom! I didn’t notice that it wasn’t showing up in photos, but the lower half of the walls in this bathroom are not smooth plaster, and they aren’t painted tile either—they’re Keene’s cement! Keene’s cement is a very hard and durable plaster developed in 1838 that was often used in public spaces and other areas needing a hard-wearing surface. I think it maintained popularity until about the 1920s or so, but it’s still in production! My Keene’s cement looks like 6×6 tiles in a running bond pattern. A lot of you guys recommended simple subway tile or something similar for the shower surround—which would be perfect and really affordable—but I got super hung up on having real tile right up next to this more subtle fake tile walls. Maybe that’s dumb? It just seemed…not right. I also got concerned that the toilet, sink, and tub are all different shades of glazed white, and I’d regret adding yet another shade of glazed white. Maybe that’s also dumb? Regardless, I’m taking the opportunity to do something different and kind of unlike me and I think I’m into it.

Anyway! Also of note in that image above: that wall was covered in Formica, so I’d never seen what was hiding underneath—which looks distinctly like years of someone painting around a radiator! A tall and narrow radiator tucked into this corner rather than this lower/longer one that’s here now must have been nice. I wonder what happened to it. It’s cool to see the original beige-y paint on that Keene’s cement, though. Dare I say, I like it? 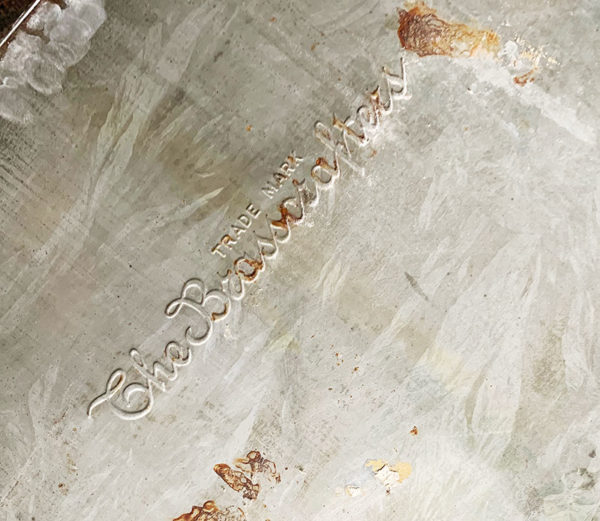 Also, I took down the mirror to get to work on the walls! The backing is embossed with this “The Brasscrafters” logo, which appears to have gotten its start in 1899. They made all the bathroom things: mirrors, soap dishes, shelves, towel rods, hooks, toilet paper holders, and so on—I really enjoyed scrolling through this catalog from the 20s and finding my mirror! 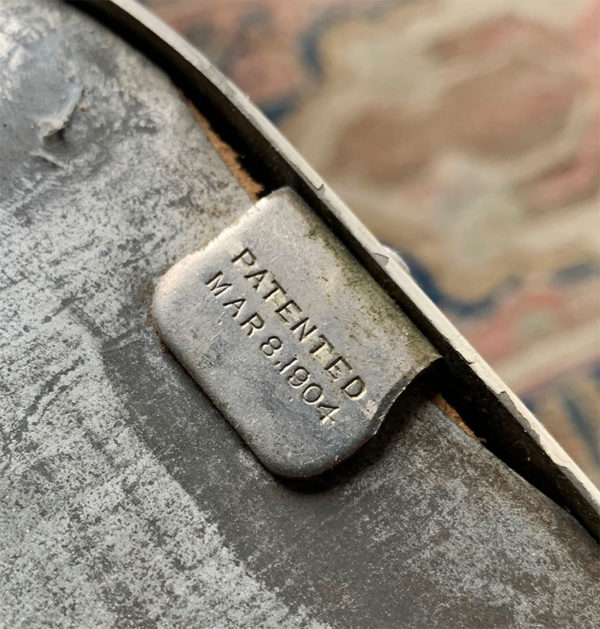 The clips that hold the mirror backing into place dates the patent at 1904, although it looks like these mirrors were in production for a few decades so I’m not sure when mine was actually made/installed.

I don’t see any manufacturer stamp on the sink itself, but a commenter named Margaret pointed out that it sure looks a helluva lot like a JL Mott sink, which some googling confirmed. Look at this one, which they say was made in 1892! Cool cool.

The shelf brackets are stamped “S. Sternau & Co Brooklyn NY,” which was started in 1893 and later became Sterno, the brand name that’s synonymous with their signature product, canned heat!

I gotta get back to my bathroom now. GO GO GO.

Leave a Reply to Bean

Click here to cancel reply.
I Have Got to Do Something About This Bathroom. →
← My Upstairs Bathroom Refresh: The Big Reveal!