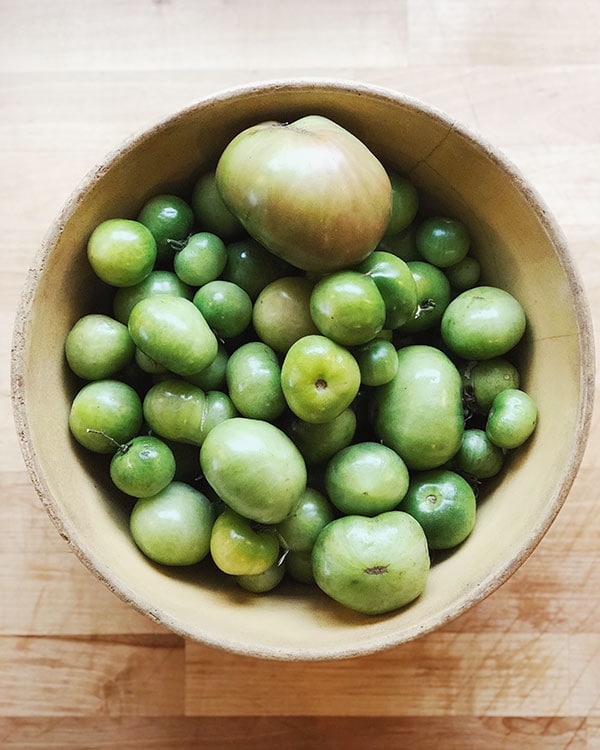 The other day, as part of my Fall-To-Do-List-I’m-Determined-To-Really-Do-This-Year, I began shutting down the garden for the season. It’s one of those tasks that’s so thoroughly…fall. Cutting back spent perennials, pruning back shrubs, bagging leaves, splitting bulbs…taming all that stuff and taking care of this kind of ordinary business just feels so GOOD. I usually feel like a spectacular failure around this time of year because, inevitably, there’s always way too much renovation work to button up before winter, so tasks like these just fall by the wayside—so it feels like a huge mark of progress to be able to take the afternoon and just…putter around in the vegetables and set myself up for some highly successful spring planting in a few months. Little by little things are starting to feel rather civilized around here, as though the vision of living here that I’ve held onto in my mind is finally starting to align with reality. It doesn’t happen all at once, but it’s moments like this—out there in the crisp autumn air, peacefully yanking the languishing tomato plants from my modest backyard produce farm and wrangling them into a neat row of yard bags—that feel like glimpses into what life might look like someday. It ain’t bad.

Another major development has occurred: after 2+ years of hot plates and a small toaster oven, I have a working stove again! My kitchen itself is still a long ways from completion—almost everything in it is still “temporary,” except for said working stove—but it’s workable. And I am WORKING IT. Over the past week I’ve rediscovered the magic of roasted vegetables (didn’t realize how much I missed those!) and have baked like 7 different things. I don’t think of myself as some kind of great cook but I do enjoy it, and so restoring this basic functionality feels like a big deal. 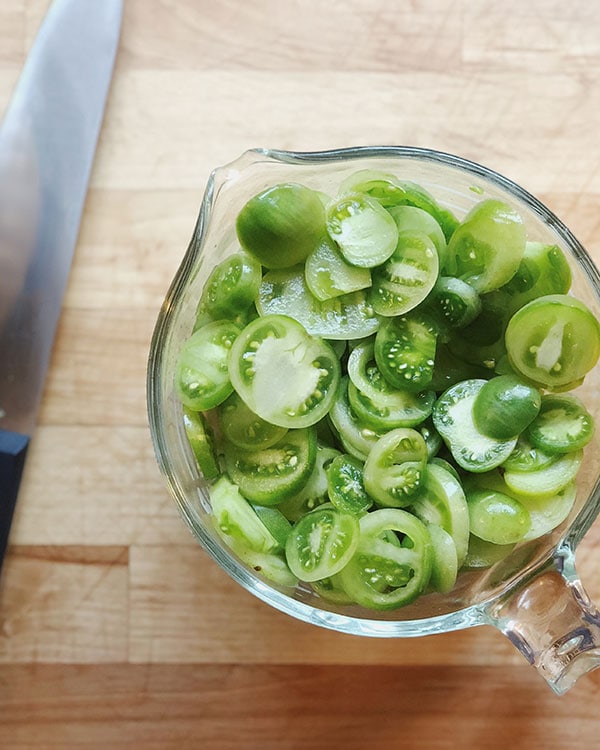 SO! We’ve all heard of fried green tomatoes, yes? It’s, like, a thing in the South. I also vaguely remember my friend, originally from Tennessee, saying something one time about his mama’s Green Tomato Pie, a “this could come in handy someday” detail I catalogued somewhere in the back of my brain, only to have it reemerge as I looked down at all the green tomatoes still clinging to the plants I was about to rip out of the ground. So instead of just throwing it all in the yard waste bags, I collected all the remaining green tomatoes first and asked my friend for mama’s recipe.

He didn’t know the recipe. GREAT JOB, FRIEND. So I turned to google, looked at a few recipes, and decided I’d just make something up instead. Firstly, I didn’t want to make a pie crust. Secondly, the more traditional recipes I was finding struck me as extremely sweet with way too much sugar for my bland Yankee tastebuds. So instead of a pie I made it a crisp, and instead of the sticky-sweet filling I scaled way back on the sugar, plus I added some things, and then it occurred to me “wait, did I just develop a recipe? DOES THE INTERNET NEED TO KNOW?” so I’m going OFF BRAND to tell you all about it. This is when I take my dramatic turn as a food blogger. I have found my passion. Fuck houses; I’d rather eat.

So anyway. This is a dessert you can make with all those green tomatoes at the end of the season, and I don’t think it’s horrible for you as far as desserts go, and I really like it. The green tomatoes bake much like an apple, and the restrained use of sugar allows the tart green tomato flavor to come through without hitting you over the head with it. It’s a little weird but so far a limited selection of friends have confirmed that it is, in fact, pretty delicious so here we go. 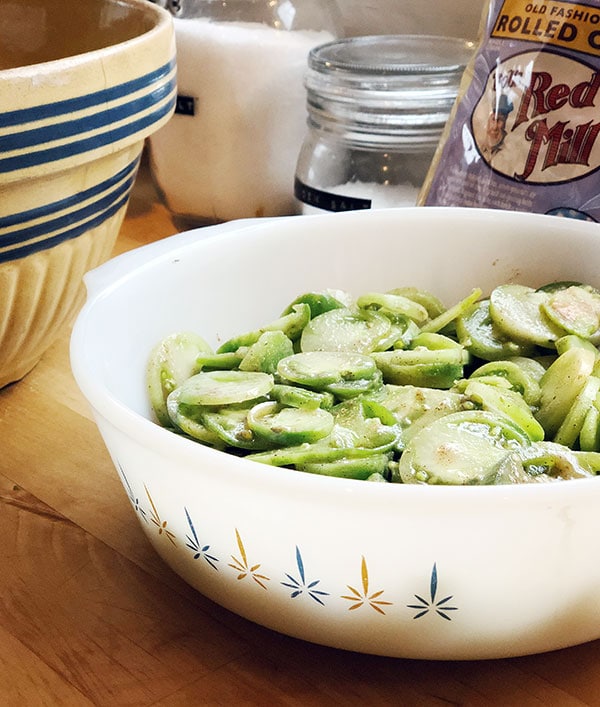 Step 2: In a large bowl, sprinkle flour over the green tomatoes and toss to combine. Throw in the rest of the filling ingredients and mix until all tomatoes are nicely coated. I used my hands. Transfer the filling to your baking dish in an even-ish layer (I used a 1 1/2-Quart round baking dish, but you do you).

Step 3. Grind your almonds and cashews. I used a coffee grinder, but whatever works (blender, food processor, mortar and pestle, rolling pin, laser eyes). Mostly you want a kind of coarse powder, like the texture of coffee grounds, but it’s good if there are still some larger chunks, like around the size of a…pencil eraser? Do what feels good. Choose your own adventure. Grind enough nuts to measure 1 cup and then transfer to a bowl.

Step 4. Melt the butter. I use the microwave. Mix the melted butter and the brown sugar, and then add the oats.

Step 5. Combine your buttery sugary oats with the ground nuts and mix until well-combined.

Step 6. Top your filling with the crisp topping in an even layer over the whole thing. It should be enough to provide good coverage! Sprinkle a pinch of coarse salt over it all—Maldon if you can; it’s the best! If you’re feeling fancy, distribute a few 1/2 T slices of butter on top before it goes in the oven.

Step 7. Bake at 350 for one hour, remove and let cool a little. You should see some of the filling bubbling up around the edges and the crisp topping starting to brown.

Step 8. Serve warm with ice cream! Or eat it however you want to! You’re a strong independent lady and you don’t need me to tell you how to enjoy dessert! 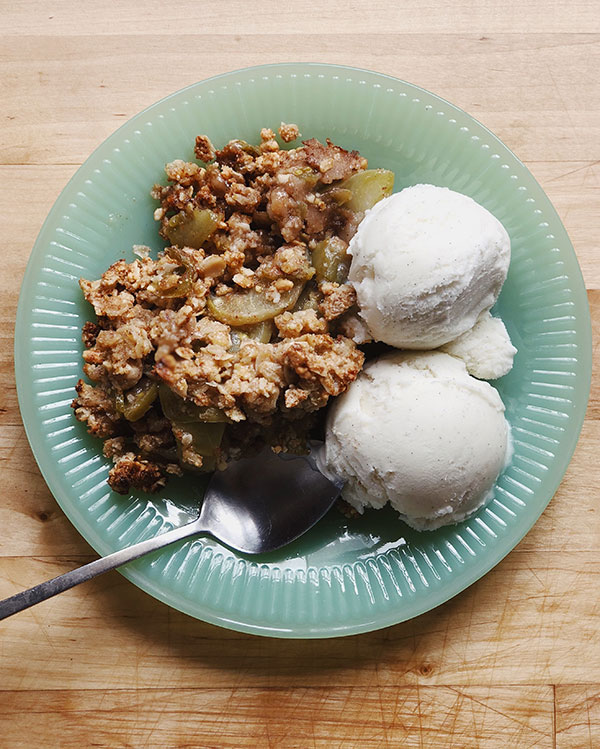