I love a good mantel. I love a good challenge. I love crazy old tiles. What do all of these things have in common? It’s this fireplace! Boom: 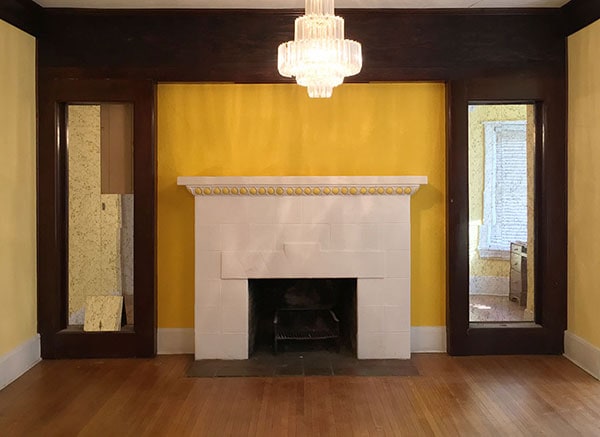 Sometimes I get asked to do bloggy things that aren’t for my own site, which is typically not my jam because I’m usually stupid busy and not paying enough attention to my own site to worry about someone else’s, but I made an exception when Angie’s List came at me with a mantel makeover challenge. I didn’t have a mantel that was a good candidate for the project, but I knew somebody who did, and this seemed like the perfect excuse to get my grubby hands on it. 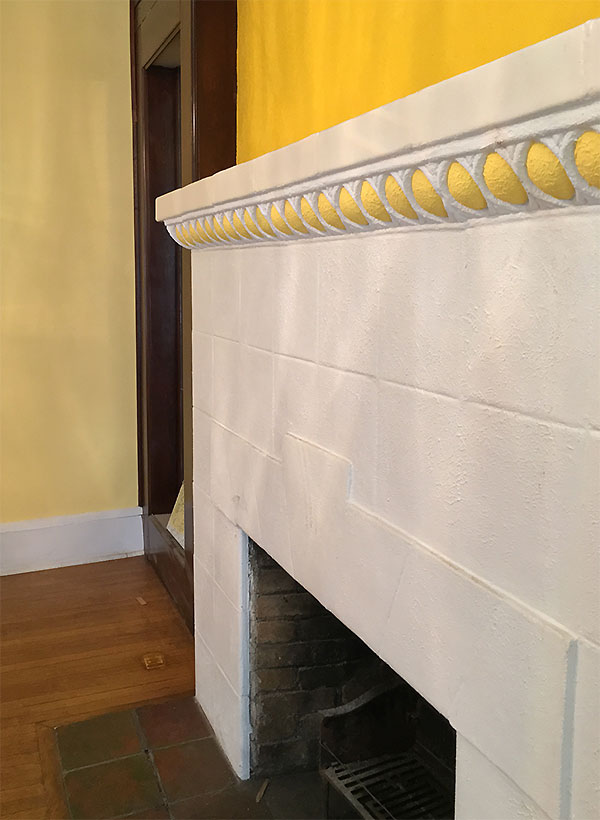 This mantel belongs to John, who just bought this incredible circa-1900 house in Kingston. I helped him find the house! I told him to buy it! He bought it! He moved from New Jersey! This poor house has undergone some serious wreck-ovation over the years, but it has amazing potential and John is totally committed to restoring it, so of course I am all over this. He doesn’t really need a full-on designer and he doesn’t really need a turnkey project manager, so I’m stepping into sort of a consultant role as he moves through this renovation…helping him design and plan and coordinate and execute and make this house the showpiece it’s supposed to be.

ANYWAY. This was exciting because there wasn’t anything technically wrong with this mantel or this room…ya know, it could have been fine but ugly for a few years and everyone would have lived. Often with old houses there’s a pretty big gap between the fun and pretty and the finance-draining and decidedly unsexy, and the latter is what has to take precedence. So it was nice to have a great excuse to bump this wayyyyy up the list (like, literally before “unpack your boxes”) because the “before” made me so sad. Somebody painted the original tiles with either a textured paint or some kind of plaster overlay stuff, and those 1973 built-ins—replete with fluorescent lighting, crappy wood, gold-crackled mirrored tiles, and an enormous soffit overhead connecting the two sides—had no business in this magnificent living room. 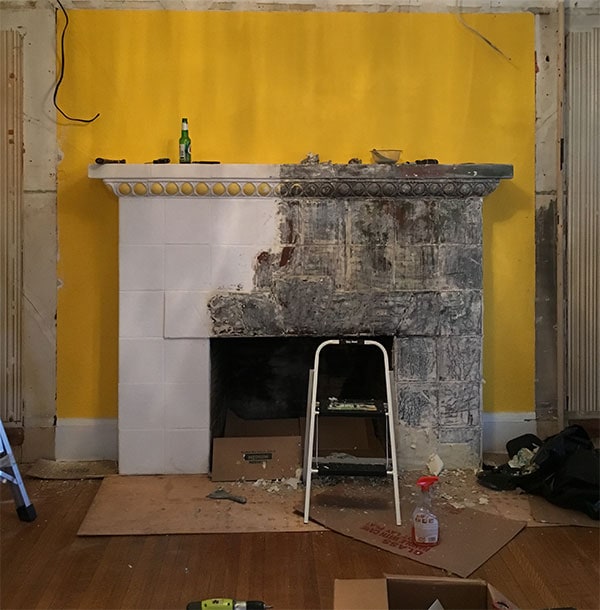 First order of business was demo-ing the built-in stuff and starting the longggg and arduous stripping process. Between John and I, it probably took about 30 hours of scraping and scrubbing and picking and cursing and beer-drinking to get down to the bare tile. We stripped the fireplace in two parts because I actually lacked confidence that the paint stripper would be able to penetrate whatever was causing the texture, so I didn’t want to waste and make a huge mess only to figure out that we had to come up with a plan B. 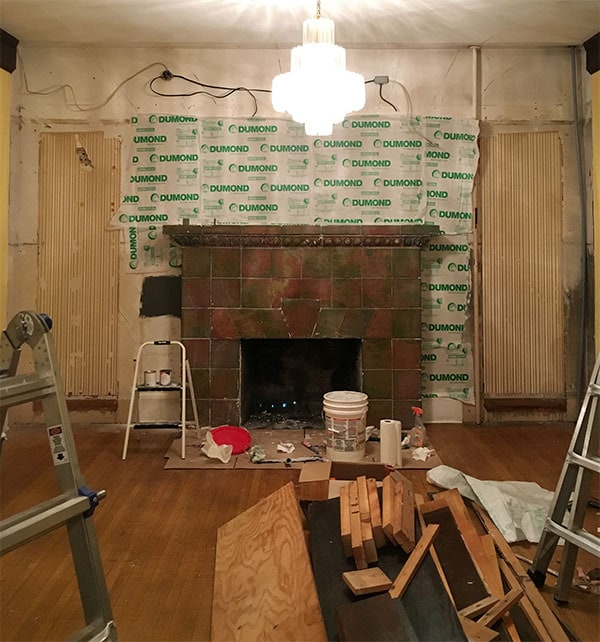 We did not have to come up with a plan B, though, because the paint stripper worked SO well. When the room was almost done, I had John go back to the little nooks and crannies with one of those 15 minute jelly-like strippers and a bunch of tiny tools like dental picks to really get everything off.

Now, I love that tile. I’m guessing a lot of people won’t love that tile, but I don’t care! John had a mini freak-out when we first started really exposing it, but I didn’t care then either. I think it’s glazed terra cotta, with a burnt-orangey-red and green color combo that is admittedly extremely hard to work with. I kind of can’t blame whoever painted it because with the wrong wall color and stuff in the room, I can see it looking pretty awful. John even asked whether we’d be better off painting it again, but I veto’d that plan because I’m super bossy and unpleasant generally, and you just don’t paint old tile. You just don’t. Don’t do it. But really, this is a pretty awesome original detail in a house that is missing a fair amount of original detail, so in my mind it wasn’t even a choice.

By the way, that pile of wood in the foreground is all the lumber that comprised the old built-ins. I’m a crazy person, but hear me out. My basic rule with lumber is that if it’s over about 6″ long, it gets kept. This is why my garage looks like a disorderly lumber yard, but it’s also why I barely ever have to buy wood anymore! It’s environmentally responsible and economical—you don’t necessarily think of 1x6s or something being a large expense in a project, but wood is pricey! And it’s not as nice as it used to be, anyway! Even though these built-ins were only from the 1970s, it was pretty interesting to compare the totally standard 1-by lumber to what’s commonly available today—the not-even-that-old stuff we tore out is so much denser and heavier and contains fewer knots. Even the furring strips were pretty nice! All of it got de-nailed and set aside and treated like gold.

After the major mantel-stripping was over, I applied the Peel Away to the surrounding wall, too. The texture was carried up this part of the wall, and it seemed potentially easier and better to try to get down to the bare plaster before repairing and skim-coating the wall than just covering it with a skim-coat. The Peel Away worked really well for this, too, and didn’t damage the plaster at all (it’s commonly used for this, but I’m not sure how other types of strippers would react). Then it was just a matter of doing a nice skim-coating job and light sanding and we were good to go! 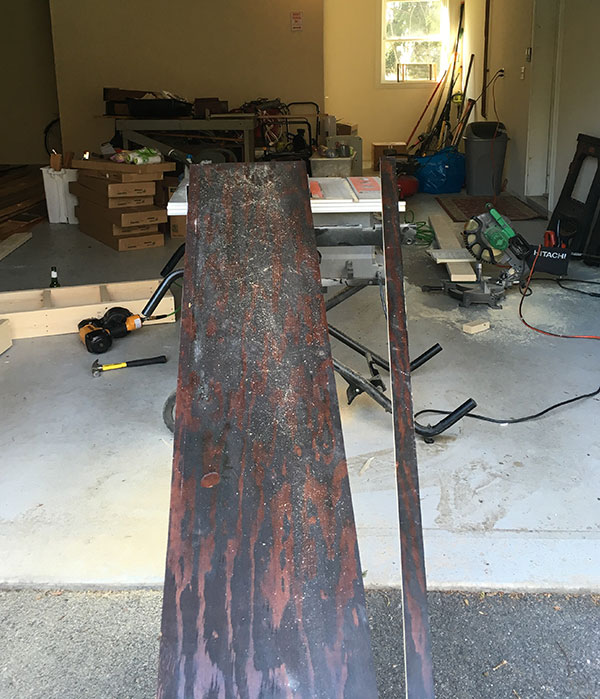 Dudes, I’m a woodworker now. Basically. Or something. If you want to become a crazy salvage wood person like myself, invest in a decent table saw—I have no idea what I’d do without mine! This way you can rip your recycled boards into your own dimensions precisely and easily, and for some reason I find that VERY fun. I have a Porter Cable table saw which has been going strong for a few years and works great. 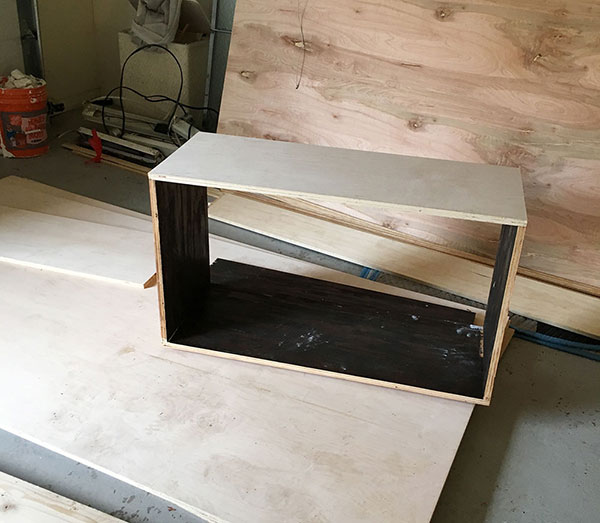 I used a combination of salvaged and some new wood to make some new built-ins, the basis of which is basically a plywood box on a 2×6 base. Someday I’ll learn some fancy joining techniques, but on this day I went with what I read on some weird message board a long time ago about building cabinet boxes—that a combo of plywood, wood glue, drywall screws, and finish nails is actually pretty comparable to nice rabbeted joint, except significantly simpler and faster. Then it was just a matter of putting them in place, furring out the sides and top to make them appear super beefy, and throwing a lot of salvaged (and some new) trim and stuff to make it look all classy and finished. 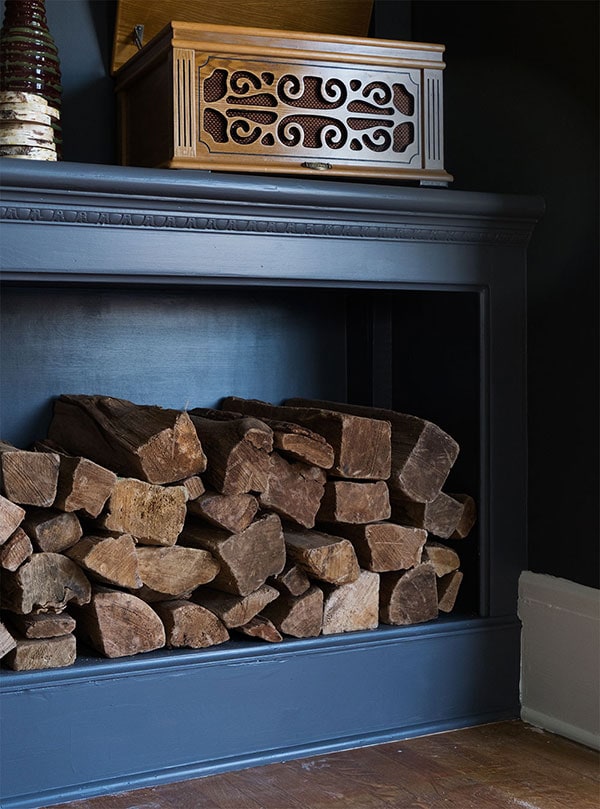 Not too shabby, right? I feel pretty proud of how these wood storage cubbies turned out, especially because of how little new material went into them. It was a lot of fun! We plan to add shallower bookshelves going up to the ceiling on top, but there wasn’t enough time to do that and get the post to Angie’s List in time, so I’ll post an update when that happens.

Let’s see that before photo again, just for funsies: 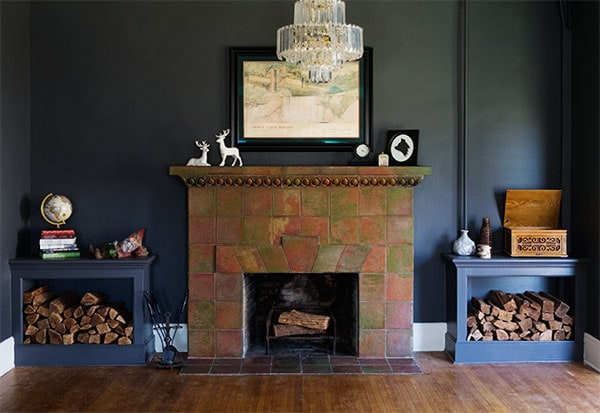 I love that wall color for the tile! It’s kind of a charcoal-y navy with some green undertone, and I think it works super well. John originally wanted light grey walls in here, but I’m glad he let me talk him into going super dark after we both saw the fireplace tile and felt like our light grey samples weren’t doing it any favors. 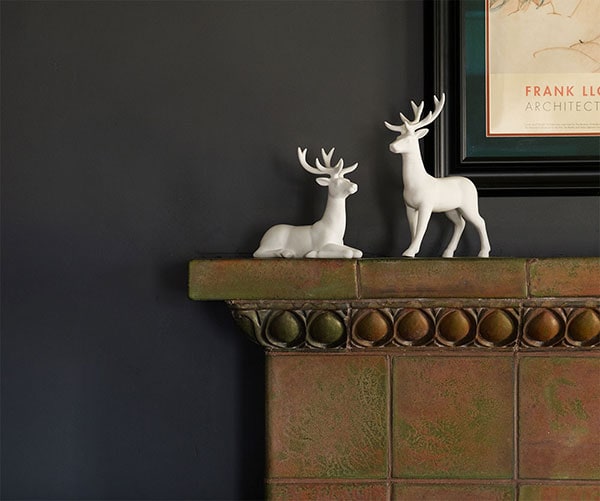 That egg-and-dart detail is just so amazing. I love that every one of these tiles is completely unique, a little irregular, and just so perfectly-imperfect. So worth the ridiculous time commitment and blisters. 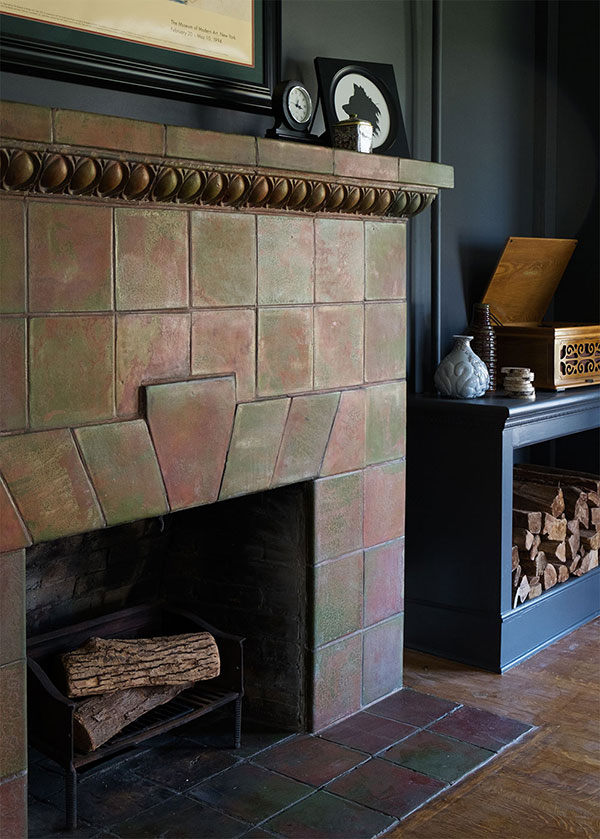 SO! Turns out I was not the only blogger that signed up for this, and Angie’s List made it a CONTEST. WITH A CASH PRIZE. WHICH I WOULD VERY MUCH ENJOY HAVING.

I wrote a whole other blog post for Angie’s List with different pictures and text and more detail about the process and products, which you should go check out here! And then you should go vote for my project here! I guess you can vote once every 24 hours, and voting is open for a few more weeks, so go to town! BRING HOME THE BACON, FOLKS!