Eva and I have both had a long day– we volunteered to open our dorm rooms to admitted NYU students, so tour groups have been in and out all day. And while it was a bit tiring, it was nice to hear the reactions as people walked in– the cleanliness and decor won us some serious accolades, and reminded me that I haven’t even skimmed the surface of this room on the internets. And really, captive audience, you deserve more.

So moving around clockwise from where we left off: the desk.

Dorm furniture, as a rule, is chosen for function over form. In our case, it seems that function was chosen without regard for the form. What I mean to say is: these desks are butt ugly.

But maybe it doesn’t have to be totally awful, right? Of all the lessons I truly took to heart from Flavor of Love Girls: Charm School (hosted by ACADEMY AWARD WINNER Mo’Nique), my favorite would be Commandment #4: Thou Shalt Work What Thou Art Working With. Learn it, love it, live it. 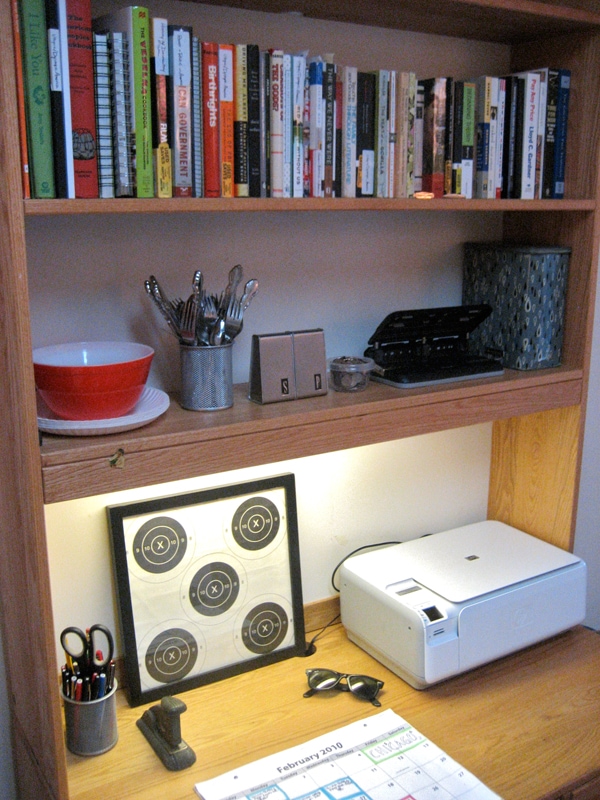 Yes, the calendar says February, but it still looks exactly like this.

I have a few too many books to fit on that shelf, so there’s some spillover stacked neatly on the floor, which I’m okay with. I almost always just keep the printer closed up– it’s really easy to pop down the lid and load some paper, and it keeps things looking much cleaner . The teardrop tin is vintage from Value Village and has a hilarious description on the other side about “how to use your new portable refrigerator.” That’s not a fridge, that’s a tin. People in the 50s were so crazy.

The art is a real target, like for gunz. I actually love it, but I felt weird about putting it up in the room. I bought it over Thanksgiving in Portland when I went to visit my BFF Chandler, and we went to an entire Gun Show at the Portland Expo Center. I can’t describe how out of place we felt, but I thought this $1 target was the perfect souvenir. It fits almost perfectly in this square frame, which I originally purchased at a Canadian store called Jysk for $8. So for $9, a simple, graphic, sort of morbid work of art. I like it.

And if you’re a glutton for punishment, or just like a good before and after, here’s the desk a couple weeks after I moved in. Admittedly, it got a lot worse than this until its big overhaul in February, I just don’t have any photos of that. The shame! 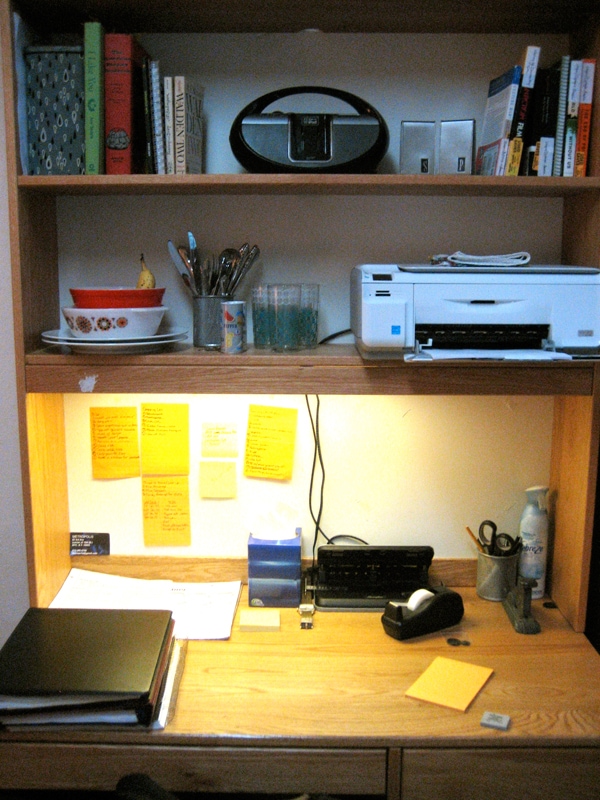