About a week ago, I showed you the IKEA KARLSTAD sofa we picked up for Chandler’s apartment. But that sofa—the very same one that looks huge in my apartment—was basically swallowed by Chandler’s cavernous living room. 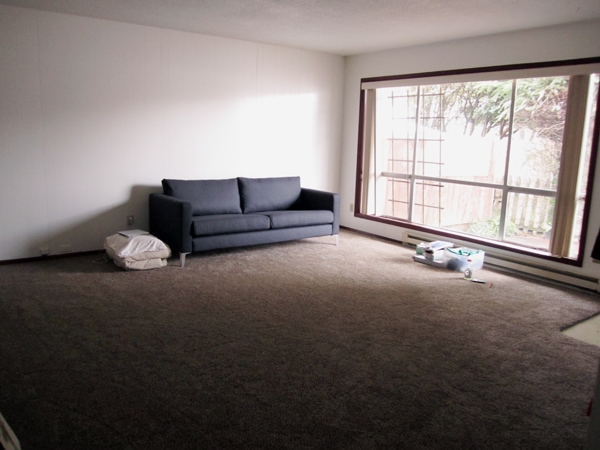 Chandler really liked the idea of a sectional from the beginning, and since there’s clearly room for it, Day 10 found us going back to IKEA to purchase a few assorted items to finish up the bathroom and the KARLSTAD chaise add-on. So itty bitty (which is actually a healthy 81″ long already) sofa turned into hulking, awesomely comfortable sectional. 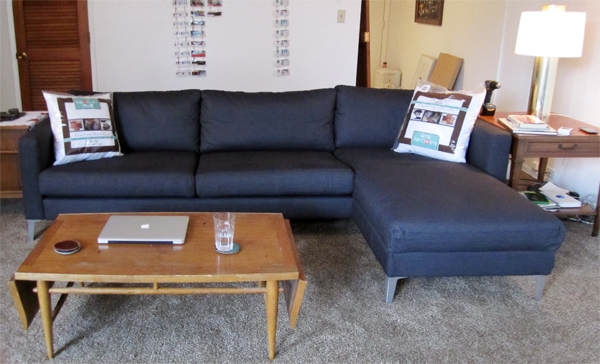 Oh, and see that big brass-i-licious lamp? Thrifted for $8. And it’s a touch lamp. There are no knobs or switches, you just lightly touch any part of it and it turns on and off. I sense witchcraft. Really fun to play with witchcraft.

We’ll be sewing some real pillows soon. The plastic casings they came in are a little too avante-garde for Chandler’s taste.

More importantly, the bathroom got finished, which was pretty exciting. We’d gone several days without a mirror and were starting to wonder if we even still existed. Or more importantly, if we were still pretty. 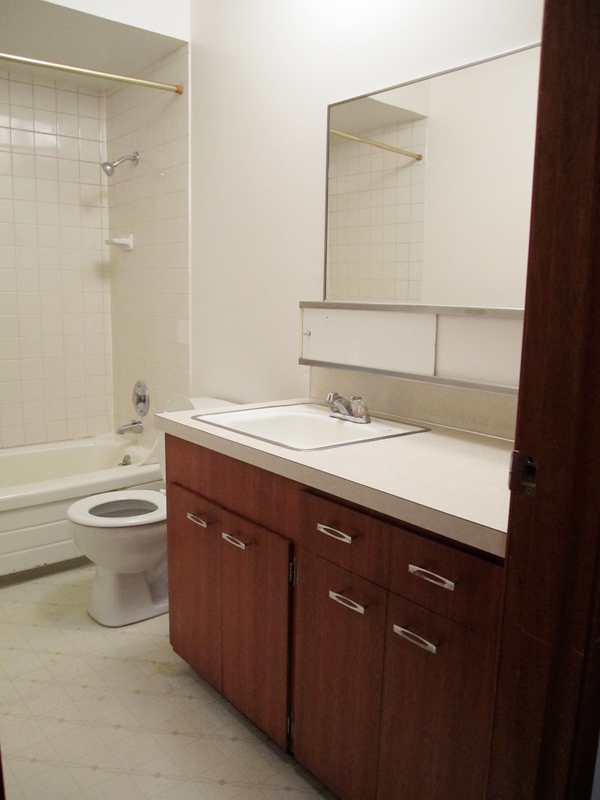 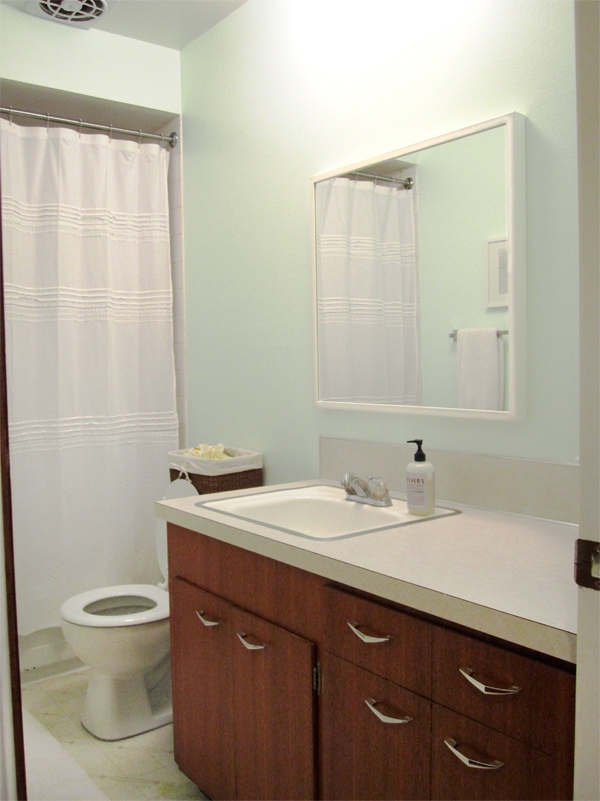 The mirror is the STAVE from IKEA, which I think is a nice size for this bathroom. I might have tried to thrift something vintage , but it’s a really good mirror at a really good price that works well in here. 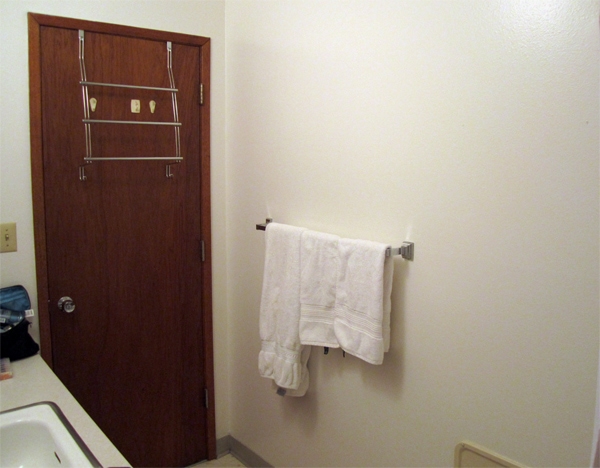 The other side of the bathroom had a towel rod that hung awkwardly directly behind the door and dingy paint-covered switch plates. And see those three broken plastic hooks stuck to the door? Well, let’s just say they were holding on with a death grip and caused a little damage coming down. 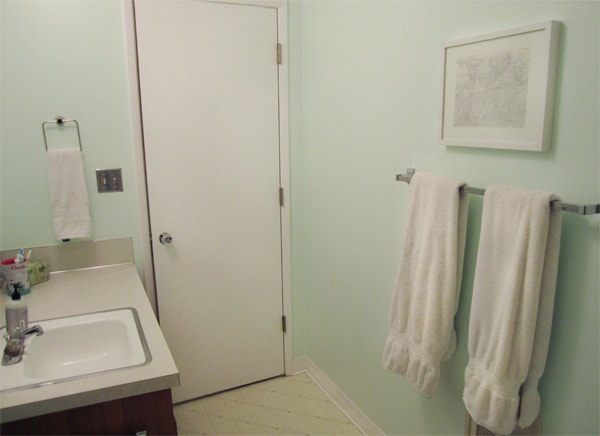 So the door got spackled up and painted, switch plates were swapped for a couple dollars, and I just moved the existing towel rod over a couple feet. It makes about ten times more sense here, anyway, since it’s right by the shower instead of across the bathroom.

And I painted that rubber baseboard stuff! It can be done! Oddly, every wall in this room had a different color plastic baseboard, but I just lightly sanded them, primed with Bull’s Eye 1-2-3 latex primer and gave them about three coats of semi-gloss white trim paint. On one hand I think they look much better, on the other hand I think they might make the floor look sadder. 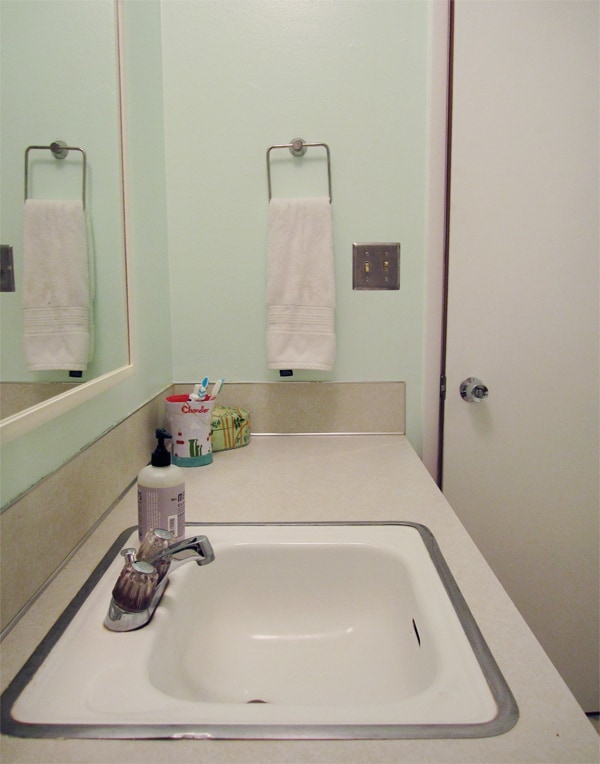 We also added a little SÃ„VERN towel hanger from IKEA, which is nicely designed and continues with the chrome theme. 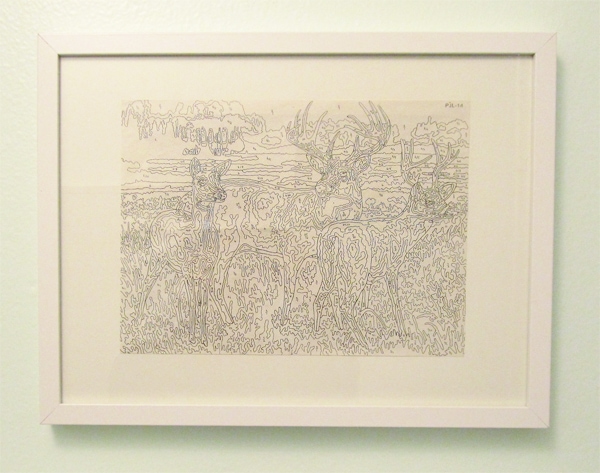 The little art above the towel rod is this paint-by-numbers guide Chandler had already in a RIBBA frame from IKEA.

This whole bathroom didn’t cost too much, particularly factoring in that a couple of the pricier items (like the Simple Human trashcan and the shower organizer) were bought with a gift card at the Container Store, and the paint used on the door and trim was leftover from the living area. 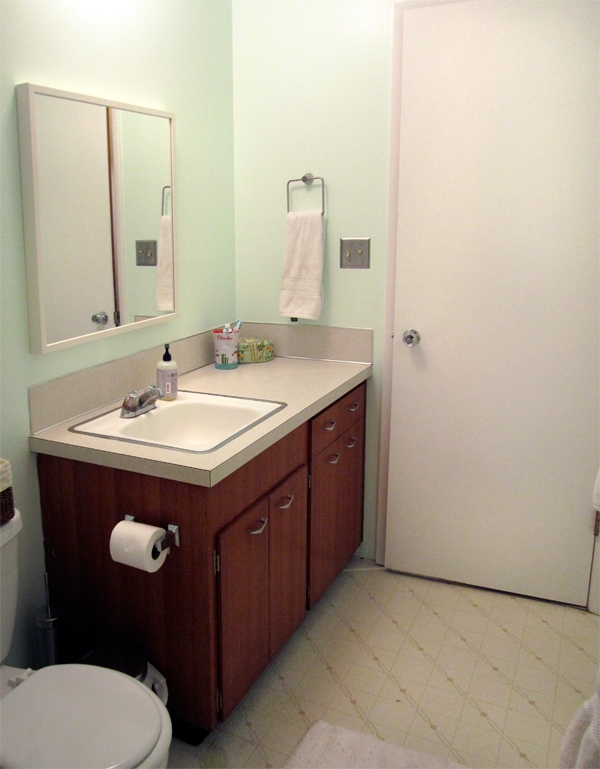 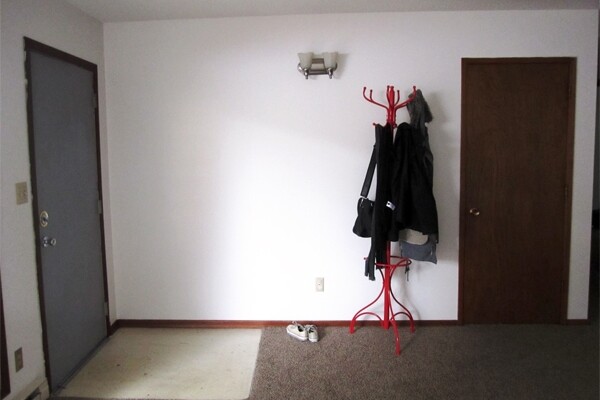 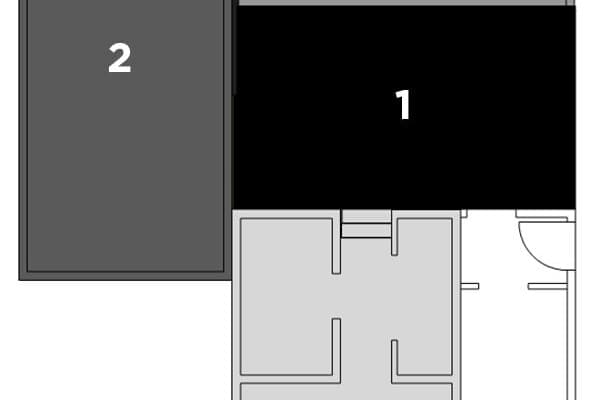 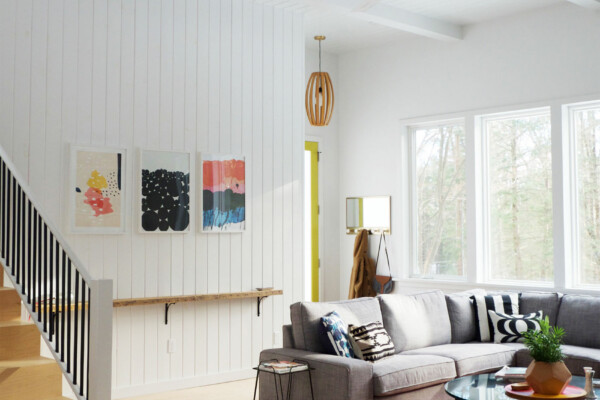 Remember That Time I Built a Whole House?