In my last post, when I was shamelessly campaigning for votes in the Small Cool contest (THANK YOU everyone! We made the finals, SO GO VOTE YOUR HEART OUT STARTING NOW!!!), I mentioned that our “circumstances” had changed slightly. When somebody asked me in the comments what I meant by that ominous statement, I told them that it was about my doggy, Mekko. I didn’t mean to cause anybody to panic, it was just a very scary time when I had very little information, but the information I did have was less than pretty. I don’t want to keep anyone in suspense, so I’ll lead by saying that she’s a-okay now, which is the most important part. For those who like the longer version (+ scavenging!), here is my saga:

Where health is concerned, I am the type of person who generally thinks that something is probably nothing. Max is the sort who is convinced that nothing is definitely something. Something that could kill you, usually. To Max, anything stray, wild, or feral has rabies, and at any given moment, one of the three of us is probably dying of something horrific.

So when Max took Mekko to the vet a couple of weeks ago because she seemed itchy (poor baby has so many allergies), he mentioned that he was going to have the vet look at a little bump we’d noticed the day before on her shoulder. I told him it was a good idea, but also that it was probably just a mosquito bite or something that would disappear in a couple of days.

The vet took a test of the bump and sent Max home with some allergy medication for the itching, and said she’d call in a few days with the test results.

The call came first thing in the morning last Saturday. Max and I had left for California on Thursday night and wouldn’t be back until Monday morning, and my friend Kate was staying with Mekko at our apartment. The pathology report had come back on the bump, and—though those tests aren’t 100% accurate—it had tested positive for spindle-cell sarcoma. Malignant. Cancer.

Cancer. There are a lot of terrible words in the english language—bile, moist, mood board, for instance—but Cancer is one of the worst. It’s the kind of word that sticks in your mind and festers there, bringing with it confusion, anger, and all manner of terrible thoughts for the future. Our 2 year old dog. Who we’ve had for less than three months. Cancer.

The surgery was scheduled for Tuesday morning last week. When I called, I asked to speak to the doctor and was told that she couldn’t tell me anything I didn’t already know. Mekko was also going to have her teeth cleaned, and the vet also planned to extract one of her canines because it’s broken. All of her canines are chipped and damaged, probably from chewing the bars of her cage in the shelter (if that doesn’t break your heart, you don’t have one), but one is apparently especially bad and it needed to go. And, of course, the lump and surrounding tissue would be removed, hopefully eliminating the cancer.

We flew home as planned, landing at 7 am Monday morning. Max went off to class uptown, and I rushed home to spend the day with my dog. I skipped class. I called out of work. We cuddled and went for a few long walks, and when Max got home we went to the dog park and let her stay until it got dark and freezing, hoping she’d get her ya-ya’s out before she’d be out of commission for at least a few weeks.

And then I got a call—the vet wanted to reschedule the surgery, pushing it to Wednesday. I agreed and hung up.

I barely slept Monday night due to both nerves and schoolwork, so I didn’t totally trust myself when, on Tuesday, I started to get immeasurably anxious about the whole situation. Everything about the whole experience just felt wrong. Why hadn’t I spoken to a doctor (not for lack of effort)? Why didn’t I have more information? Weren’t there options? What was the best case scenario? What was the worst? I barely even knew what she’d been diagnosed with, or what exactly they were planning to do about it in surgery. I did know that I’d heard some not-so-flattering things about this vet at the dog park. At this point, I’d read some not-so-flattering reviews, too. But mostly, it just didn’t feel right. But nothing felt right—cancel the surgery and waste precious time, or stick to the plan and hope for the best?

On Wednesday morning, I called the vet as soon as they opened and cancelled. Then I made an appointment with another vet, who came highly recommended by a close friend.

So we got in the car and drove to the new vet, and as soon as I met her, I felt better. She was patient and kind and answered my questions and took the time to think critically about each concern, no matter what the previous doctor had said. About the tooth, she warned that the extraction procedure was both invasive and possibly unnecessary, and she performed a pressure sensitivity test on the tooth in question and found that Mekko didn’t seem to give a shit one way or the other. About the lump, she raised the option of removing it that day, in the office, with a local anesthetic, after which the entire mass could be sent to the lab to be analyzed, giving us a clearer picture of the severity of the cancer. Low-grade and she might not even need another procedure, at least not right away, higher-grade and she would need surgery, the amount of tissue removed dependent on the severity of the cancer.

A while later (and a cool $800 or so less than the quote for the surgery we had planned for that morning), Mekko and I left the vet, a little patch on her shoulder shaved and three sutures holding together a small incision wound. Walking out the door, I spotted some paintings piled in the trash from the building next door. Because nothing can stop my scavenging ways, I checked them out for a second. Out of the pile (mostly amateur portraits, and not in a good way), a weird old abstract-expressionist canvas caught my eye and I quickly threw it in the trunk of my car without a second thought.

On Friday, I got another call. The test results were in, and the news was, surprisingly, good. Benign. Not only was the tumor not high-grade, but it wasn’t even low-grade. It wasn’t malignant or even really scary, just a weird collection of weird cells having some weird party on my dog’s shoulder, not bothering anyone. Benign. 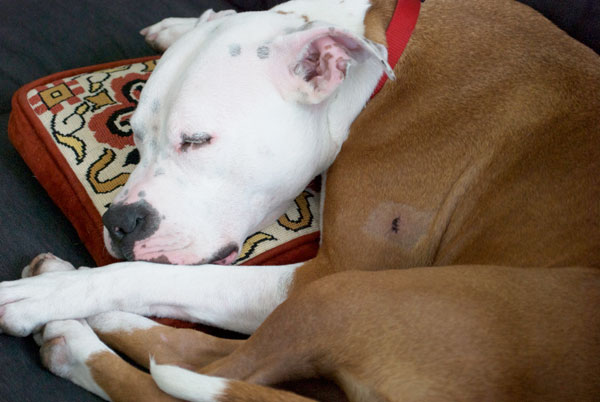 While Mekko seemed unfazed by the entire thing, I was a mess all of last week. On Saturday, I did nothing except spend time around friends, Max, and Mekko (and clean, but that counts as recreation in my world), and it was amazing. Then on Sunday I dug that painting out of my trunk and into the apartment and finally got a good look at the thing.

It’s kind of ugly? It’s kind of amazing? I think I kind of love it? Yes I do. Max loves it. I guess we love it. 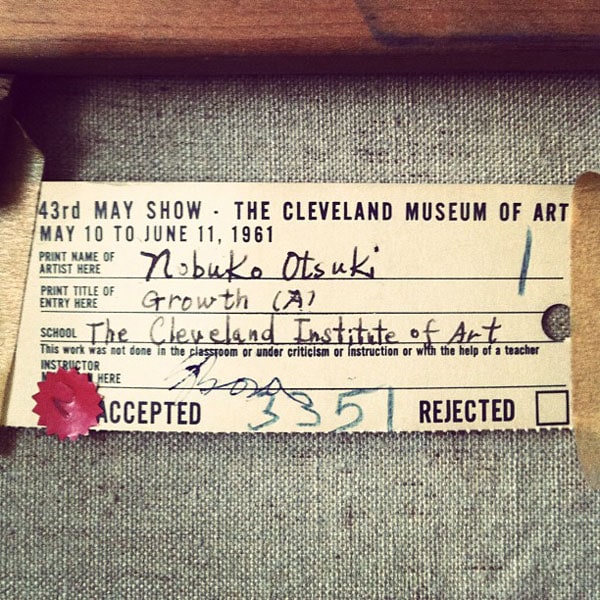 On the back, it still has the original provenance just barely holding on with two pieces of crusty masking tape. It’s super cool to know the name of the artist and where and when it came from, but what struck me was the title—”Growth (A).”

Growth. A growth was something I found on my dog that sounded scary but turned out not to be. Perhaps it was something like that, excised and viewed under a microscope, that resembled my new painting. But growth was something else, too—us as dog owners, for instance. It wasn’t easy to make that decision based, essentially, only on a bad feeling, but I’m growing to trust myself more in that department. It wasn’t easy for Max to support me and my bad feeling, but we talked it out and I think we grew a little, too. I grew to trust and respect a new person—our new, fabulous vet—and sadly I grew to be a bit more wary of authority than I naturally am as a full-time asshole. I grew more serious about saving up for if/when something truly bad happens. I hope it’s a long time before we ever have to consider our lives without our dog, not only because this little episode scared the shit out of us, but also because I think it made both Max and I realize how lucky we are to have her.

Thank you to Nobuko Otsuki and the avid spring cleaner/dead tenant who left that painting on the street, to remind me of all that crap every time I look over to the corner of my living room.

We love you, Mekko, and we’re so glad you’re here with us and that you’re OK. 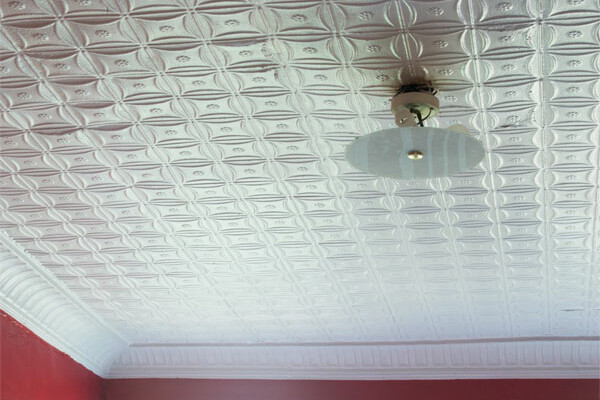 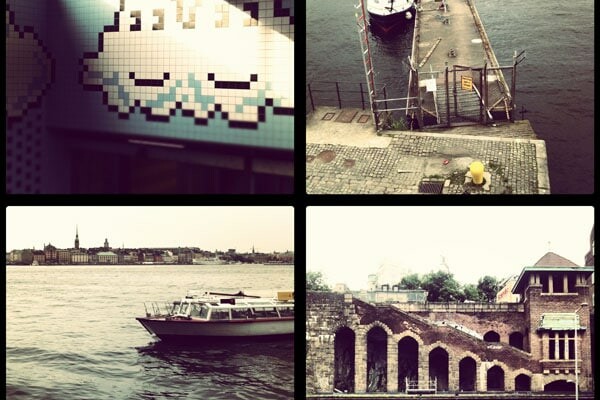 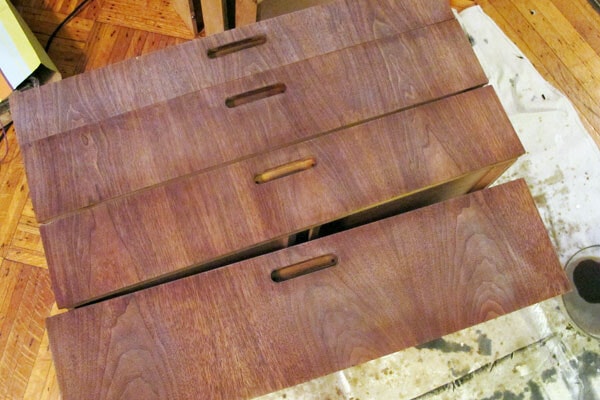