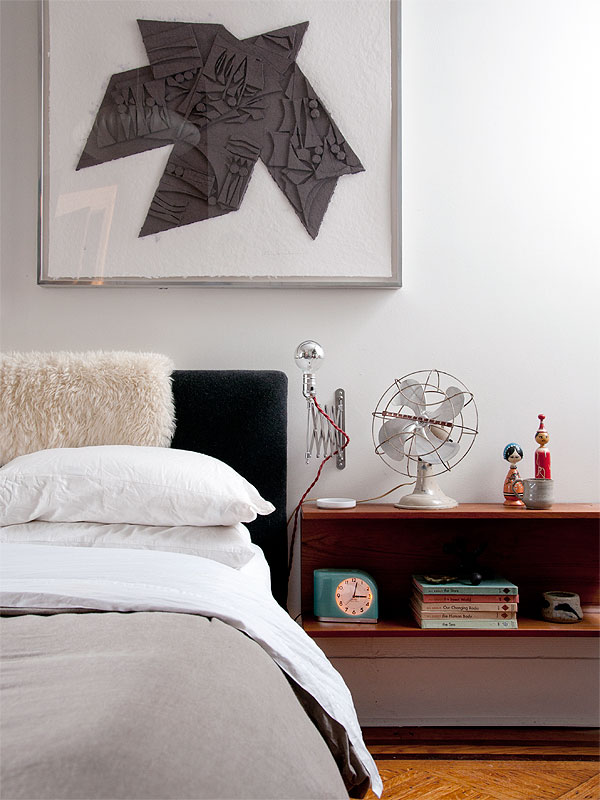 I never really intended to stop posting about our apartment entirely, but in the excitement and stress and overwhelming magnitude of projects that our crazy fixer-upper house has to offer, I guess that’s kind of what happened. Max and I both still have to be on the ground in NYC for various reasons, and while we can work remotely from Kingston some of the time, it’s a bit too far out of range to really make for a practical regular commute. Consequently, we still spend about half of our lives in the same Brooklyn apartment we’ve been renting for a little over 2 years now——and as much as I love Kingston, our house, and how happy the dogs are there, I do still love the apartment. This is the place where I became a Brooklyn resident and fell in love with the better borough. It’s the first place that I really got to share with my boyfriend——now future-husband——and it’s the place where we made a little family with a couple of fur-babies. It’s seen us through school and a weird collection of jobs, ups and downs, highs and lows; it’s been the backdrop of parties and good times with so many people we care deeply about. I’ll concede that I develop deep attachments to spaces and places, but this one will probably always rank as one of the most important.

Aside from that, there’s no way Max and I would have gone for it with the house if it weren’t for this apartment. I fell hard for this place as soon as Max and I saw it for the first time, and I don’t think that feeling ever really went away. It wasn’t because it was the most beautiful place, but it was the most beautiful place to me. If it’s not  plainly obvious, I might have kind of a weakness for trying to fix up busted up things (apartments, houses, furniture, dogs, you know), and I just remember being obsessed with how special this apartment could be with some love and care. Plenty of people think I’m crazy for spending a dime of my money or a minute of my time——as a renter——fixing up someone else’s property, and my answer to that is usually something like “well, I want to like where I live.” And that’s part of it, of course. But it goes deeper than that, too: I immediately felt a kind of weird responsibility and visceral drive to get this apartment back on track and set it on a better path. If my landlords don’t care that the cornices are rotting and the roof leaks and the hallways and stairs are filthy and there’s the occasional rat in the basement, that’s their prerogative. But for my part, the least I can do is care for my little section of this place that I love so much.

And so I cared. A lot. And I learned how to do all sorts of things, which gave me the confidence to take on something much more involved when I felt that same feeling all over again when we stumbled upon our house in Kingston. These approximately 450 square feet of living space became not only a crash course in renovation, but also a place to experiment, and try things out, and find a happy middle-ground between Max’s taste and my own. And in the process, it probably brought a lot of you here. And I wouldn’t trade any of that.

I tend to be very process-driven with my life and my blog content, and the apartment has always felt——and continues to feel——like a place in progress. Because of that, I always felt a little funny about writing before-and-after posts about it. And while things still aren’t really done (and I’m not so sure they ever will be, which is OK too), they’re in a pretty good place. The apartment is cute and comfortable, the big stuff is taken care of, and while there are still things I really want to do, they aren’t terribly pressing and will probably happen verrrrry slowly. Renovating a house doesn’t really leave tons of time or energy for the kind of pace I kept up when we were living in Brooklyn full-time.

So! Anyway! The apartment bedroom! I apologize that the photo angles between the before and after pictures don’t really match up, but all the before pictures are just quick snaps I took on move-in day. I wasn’t thinking! 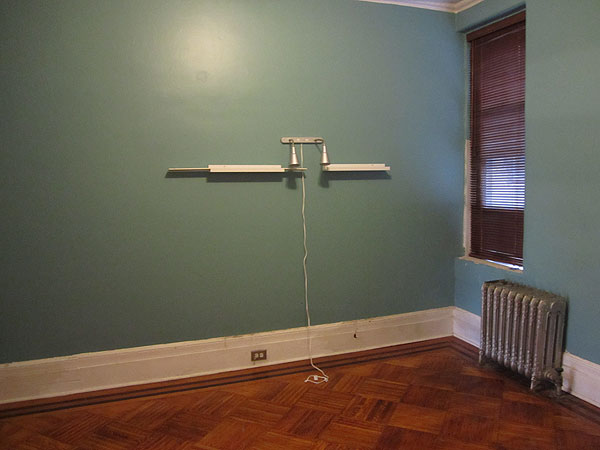 As you can see, the wall color was not exactly something I would have chosen, and everything was desperately crying out for a fresh coat of paint. The ceiling and moldings probably hadn’t been painted for at least a couple decades and were super chipped up and dirty and yellowed. 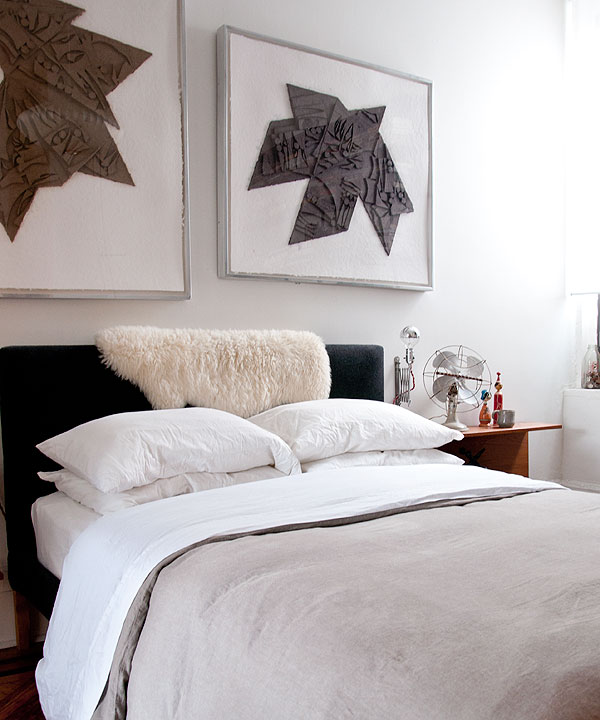 I love the bedroom in the apartment now——clean and simple and comfy. The white paint (Benjamin Moore’s White Dove) made the room feel totally refreshed and MUCH bigger. The bed is still the same IKEA hack I did a longgggg time ago——an upholstered $50 FJELLSE bed frame, which has held up really well even after over 3 years of use. The bedside lights are also an IKEA hack, and the side tables are vintage Danish shelves that my friend Maya sold me. The shelves aren’t as deep as I’d prefer for bedside tables and don’t offer any closed storage, but the wall-mounted design keeps the room feeling more open and easier to clean, so they’ve stuck around! The art was inherited from my grandparents’ home——it hung in their bedroom, too, and feels really special to have here. 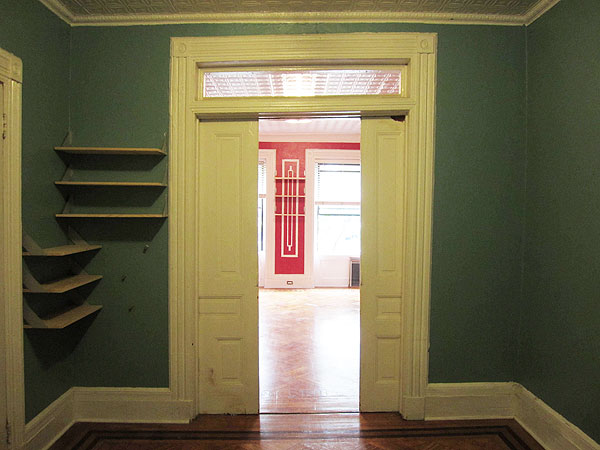 Oh man, those red walls in the distance!

When we moved in, the bedroom door (kind of out of frame on the left) was falling off the frame, and the pocket doors didn’t open and close (turned out there were mounds of newspapers from the 70s and 80s stuffed into the wall cavity behind them!). All the hardware was hidden under layers of paint, the overhead light was awful, and while those little shelves were helpful at the beginning and a good idea for making use of that corner, I wasn’t really a fan of how they looked and they didn’t really fulfill our storage needs. 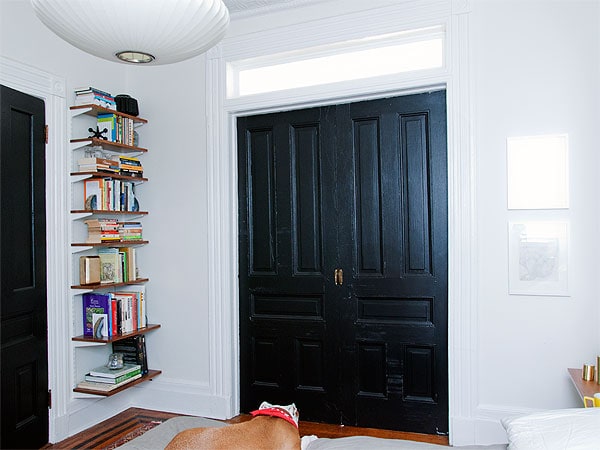 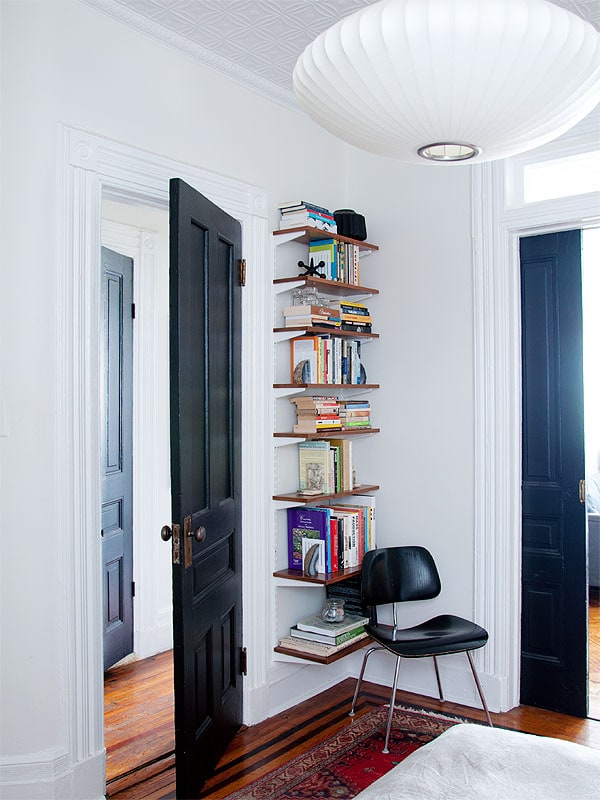 I think I’ve mentioned a couple of times that my parents are moving out of the home I grew up in, which I’m more or less OK with because it means I get to take stuff! These Elfa shelves from the Container Store used to hang in my bedroom. The great thing about Elfa and similar systems is that it’s totally modular, so it was easy to rearrange the parts to fit the dimensions of this little wall (they used to hang in a long, horizontal formation, so all I had to do was buy two new vertical tracks). There aren’t really too many other options for non-awkward book storage in the apartment, so tucking the books in this corner feels like a good use of space. I also really like the way the Elfa shelves look! 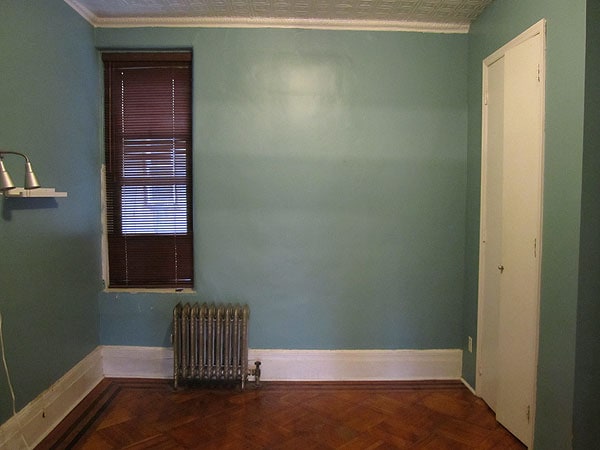 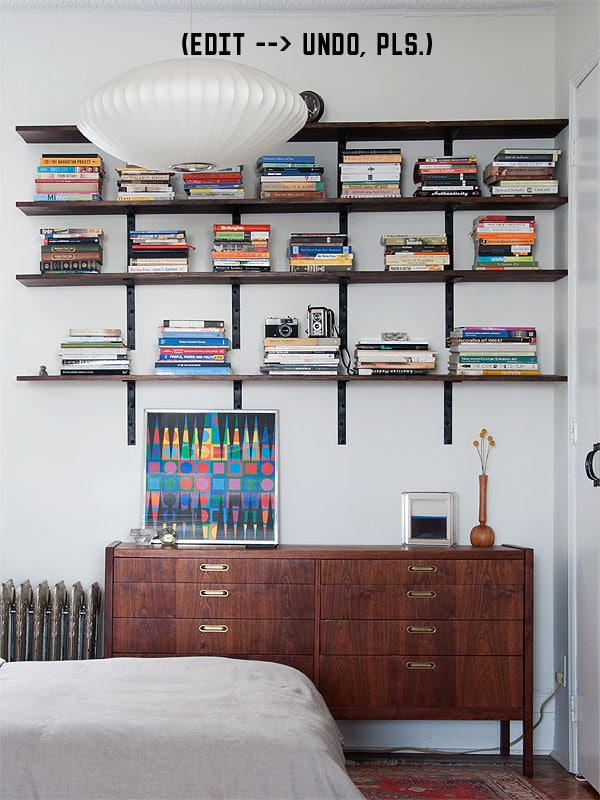 So, this looks terrible. Those shelves went up in a fit of panic when Max moved in and brought a whole library with him, and I’ve basically regretted it ever since (the shelves, not Max moving in). They used to be COMPLETELY full, but we’ve been bringing an IKEA bag full of books with us to Kingston almost every time we go back, so this is all we’re left with right now. It’s still a lot of books, admittedly (and it’s not like there’s really anywhere to put them there, either!), but I’m very excited to take these shelves DOWN, finally. The new shelves in the opposite corner are all we really need here (maybe more than we really need, but whatever), and it’ll be nice to finally not be looking at this DIY-gone-wrong. Also, it’s a good wall for a piece of art (which, at a better scale, will in turn make the dresser look nicer), so that’s exciting. Of course I used CRAZY toggle anchors to hold those shelves up, so I’ll have to spend some time doing a bunch of plaster patching and repainting this wall before that can happen. But it’ll be worth it, because this picture makes me mad. 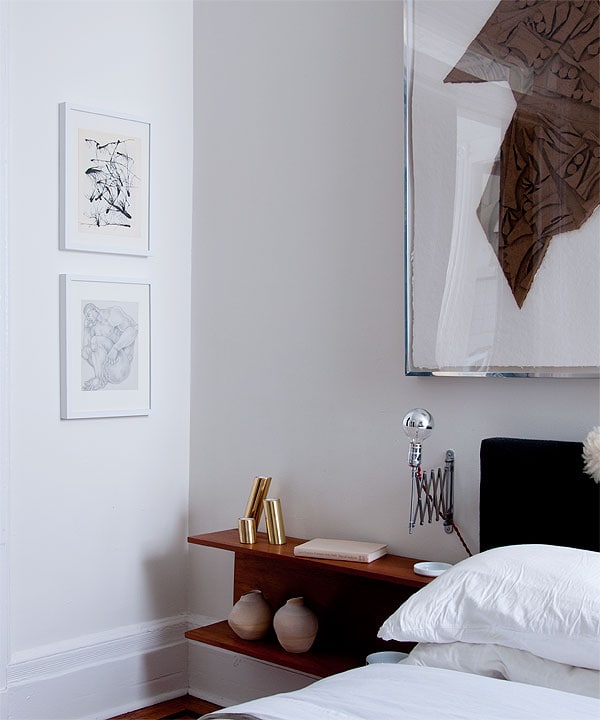 I hung up those little pieces of art a while ago, but I just like the way they look together and in those cheap IKEA RIBBA frames. The drawing on the bottom was found in my grandparents’ house, too (not signed, no idea where it came from or who the artist is!), and the one on top was made by my mommy! I found it years ago while snooping in old boxes in my basement and stole it immediately, and have somehow carried it around with me to every place I’ve lived for the past five years but never hung it up! I FINALLY stuck it in a frame and asked her about it last time she visited—I guess she made it as a young teenager during a brief phase when she enjoyed making art and experimenting with India ink? My mom is not the most artistically-inclined person, so the whole idea of that really tickles me.

The brass slanted candle holders were originally from Dwell Studio, but I bought them from Jennifer at A Merry Mishap at some kind of amazing discount on her instagram account, @ammextras, where she sometimes sells amazing things she doesn’t want anymore. Which is a totally brilliant concept, and also got me these totally brilliant brassy things I love so much. Thanks, Jennifer! The little vases were like 10 bucks at a stoop sale, and the coaster was thrifted. 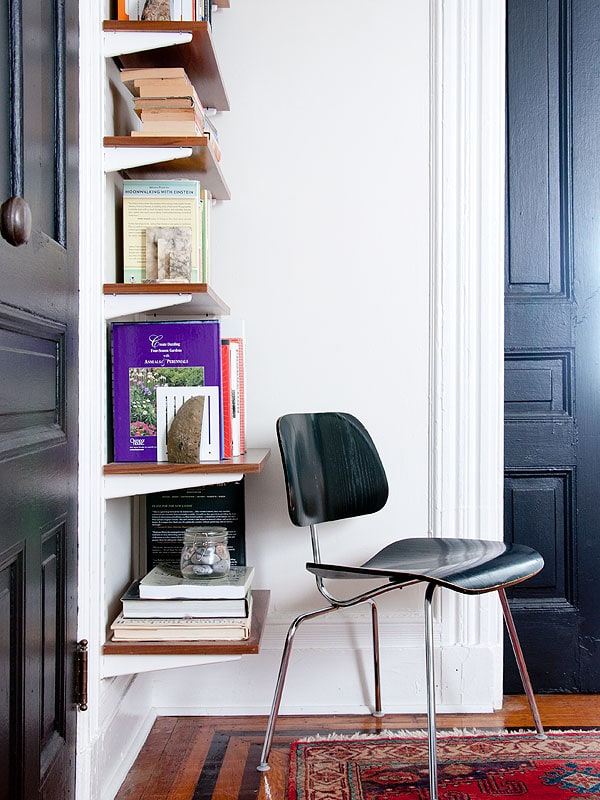 So that’s my room! I’m pretty happy with how it’s evolved in two years. Once those shelves over the dresser are down and the wall is fixed and there’s something arty hanging there, I think I’ll be happy with just calling it DONE. 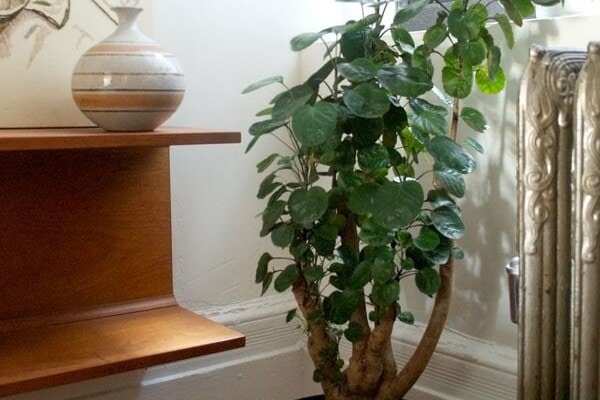 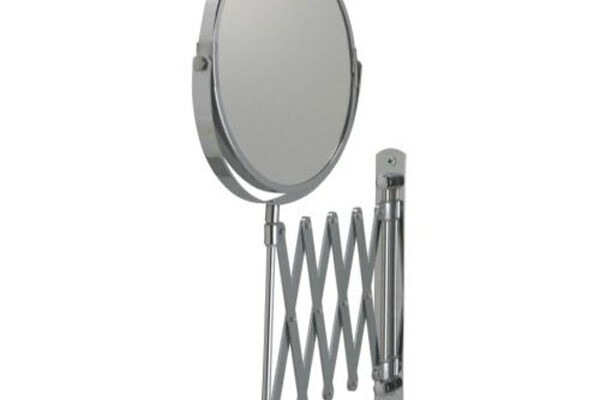