I wouldn’t say I have a lot of special skills, but one of the things I’m really good at is being obsessive. If you’ve been reading this blog for, say more than two posts, you’ve probably caught onto this fun fact. One thing that my childhood forays into gardening taught me is that almost nothing brings the mercury higher on my obsessive-thermometer than working in the garden. I’m not a terribly outdoorsy person, but hand me a shovel, a few plants, and a patch of land and I will forego nearly all aspects of human functioning and brave bug bites and worms and grubs all day long. There’s just something in my brain that tells me to.

I’m still working on the inside of the house here and there, but the ongoing lack of ceilings has kind of caused things to stall out a bit on that front. In the good news category, I think I’ve successfully hired out the ceilings to a competent contractor who is supposed to start the job on Saturday, so I need everyone to cross everything they have that this actually comes to pass. Also in the good news category: all the painful and annoying waiting for electrical and plumbing and drywalling over the past few months has forced me outside, and I’m so happy with the progress there! Sometimes you need things to go a little wrong to force you to redirect your attention, you know? More good news? The weather in the Hudson Valley has been STUNNING. Like, perfect summer. Not too hot, not too humid, lots of sunny days and good rain storms…it’s like this summer was custom-built for gardening. So I guess it’s all good news? Sure. We’ll go with that. 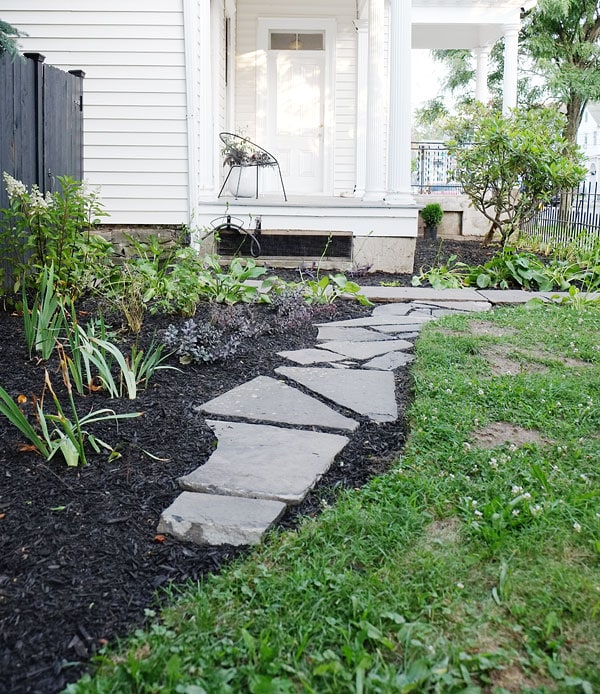 SO! Last time I wrote an update on the garden, I’d dug out about half of the front yard, re-set the bluestone path from the sidewalk to the backyard gate, put a little bluestone path of scrap pieces through the garden (which will provide access for watering, fertilizing, pruning, etc…), and planted some stuff. I wasn’t sure when I’d gather the energy to dig out and plant the front half of the yard, but a couple of weekends ago, I totally did it! It started when the plant sections at Lowe’s, Home Depot, and Adams (which is a local grocery store chain with a terrific nursery) all started having sales, and I bought some cheap clearance plants and needed a place to put them. Oopsie! 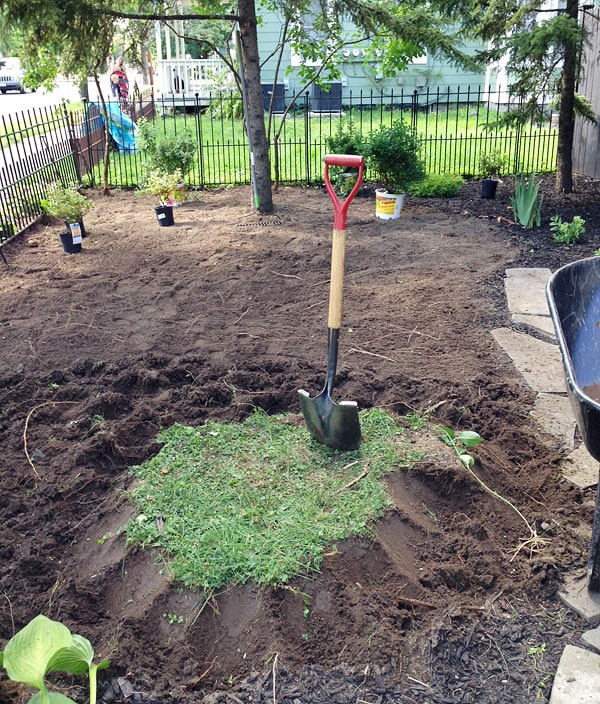 See that? That entire area used to be grass and weeds and clover and other stuff. I dug and dug and dug. Luckily, given the current state of the backyard, all I really had to do was fill a wheelbarrow, bring it into the back, and dump it in the area that used to be covered in asphalt. So all of this digging kind of played double-duty of clearing space for the garden in the front and providing some fill dirt for the back. I haven’t really made any progress on that front, either, but given how much dirt we’ll need and how large the space is, I think we’ll probably bite the bullet and end up having it brought in and graded with a backhoe so that we don’t end up with drainage problems. We need to build up the ground about a foot back there, so all this digging in the front really only made a small dent. But still! It’s better than nothing!

Digging out all the old sod was definitely the hardest part of this whole thing. It’s time-consuming, physically tiring, and the results aren’t all that exciting until you start getting plants in the ground and mulch spread out. I think I carried somewhere upwards of 60 very full wheelbarrows to the back. It was intense.

My arms are looking kind of awesome, though. So there’s that. 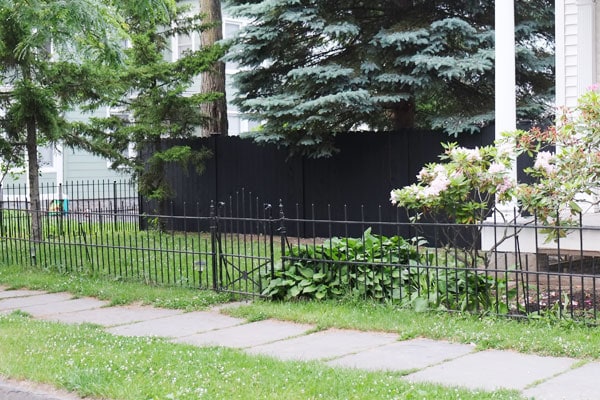 Here’s just a reminder of where I started at the beginning of the summer, right after I built the fence! I’m still really happy with this decision…everyone seemed to think I was crazy when I told them I was going to build a fence essentially in the middle of our yard, and even crazier when I said it was going to be black, but not only has it provided a little privacy and kept the dogs safe, it also gave us this wonderful front garden space! I think it all just frames the house really nicely, too…the black really just recedes (you might have to trust me on this one…) and makes the house look so pretty. Zero regrets. 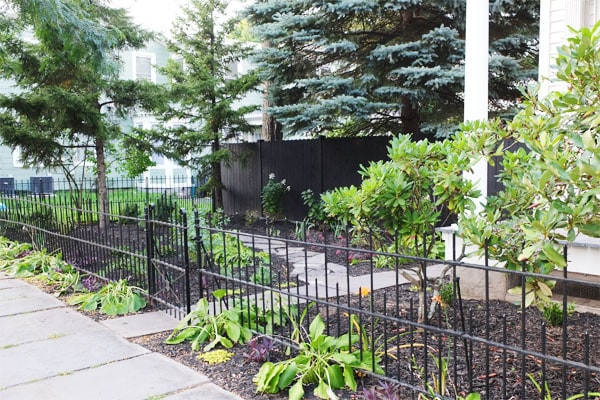 And here we are today, a couple months later!

The blogger side of me feels a little funny about even showing pictures of the garden at this stage because it has such a long way to go! Everything needs to mature and fill in, I already want to move stuff around, the hostas won’t really recover from their fairly aggressive mid-summer splitting/transplanting until they come back next spring…there’s a lot that needs to happen before it really starts looking good. But that’s OK! Not everything has to be a perfect, beautiful before-and-after, and gardening is one thing that REALLY requires patience. This summer was really about getting the sod out and getting some stuff in the ground. I fully expect to end up moving almost everything around and transplanting things to other parts of the yet-untended yard, but at least the hard part of getting all the sod out is done and things are starting to take root!

I’m really glad I did this now instead of waiting a year or two. I’ll be so happy a couple years from now when I have some great mature plants to work with, and the neighborhood is super pleased about it. Spending so much time in the front garden has allowed me to meet SO many of our neighbors, who have been so kind and supportive and encouraging—it’s been really awesome. Nobody really has any way of knowing how much work we’re doing on the inside of the house, but everyone who walks by can see the garden. It’s important to me that the house looks loved and cared for (even with the garden in these beginning stages!), and even more so because it’s so important to people around us. People really notice this stuff. The neighborhood even got together and brought us a (delicious) blueberry pie! Midtown Kingston gets sort of a bad rap, but man—I’m so happy we live here. It’s such a warm, welcoming place full of such kind people. 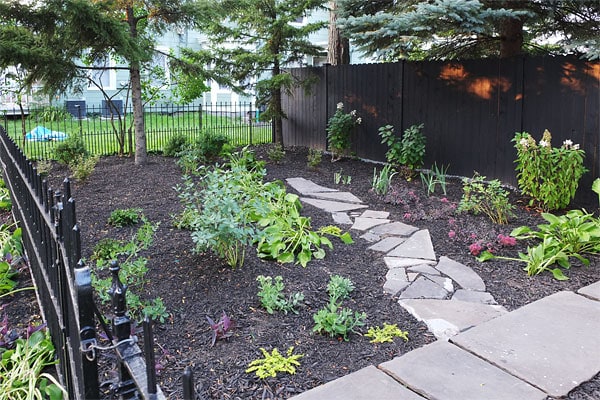 ANYWAY. For this second half of the garden, I transplanted some creeping jenny and purple heart, even MORE hosta (I hate how much of the same variety of hosta is happening here, but I still have TONS of areas to plant elsewhere, so I’m sure I’ll be happy to have them then!), and picked up a few new things, too! 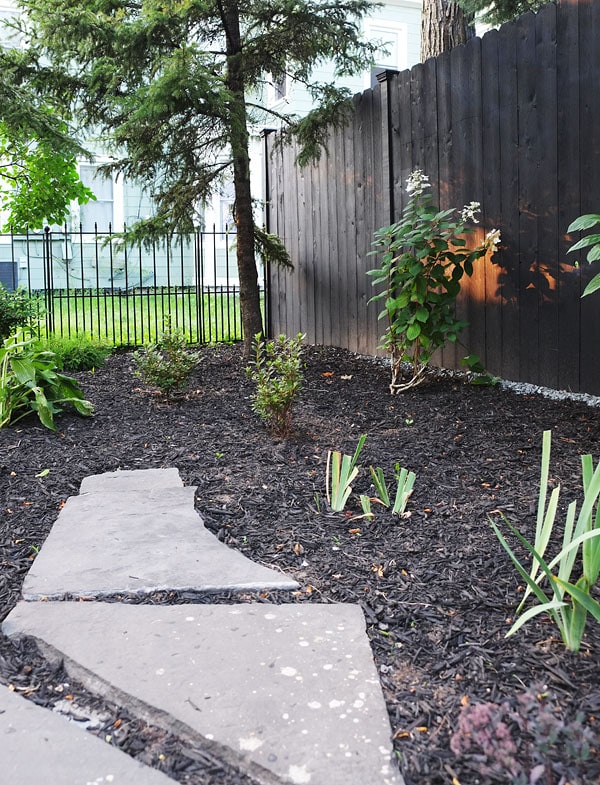 I moved the autumn joy sedum from this back corner to the front corner and put a couple of small christina marie azaleas in their place, which were on sale at Lowe’s for $6! They seem healthy and nice, though, and should have pink flowers in the spring. I’ve never really loved azaleas, but they were inexpensive, seem appropriate to the house, and I think could potentially be pretty, so I’m giving them another shot. 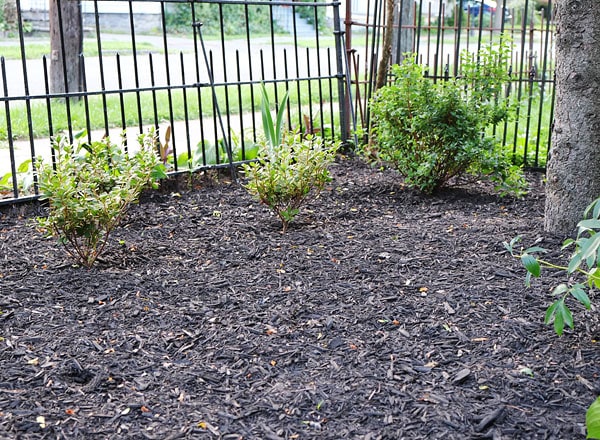 Up in the front far corner, I planted a clump of 3 more azaleas and 3 fairly large spirea bushes sort of spaced around the tree trunk. The spirea should have large white blooms…we’ll see! I’m not always a fan of spirea, especially certain varieties, but even the foliage on these seem pretty nice.

On the very right edge of the picture you can jussst see some peony leaves (the plant is done flowering for the year), and the big bald patch next to it is full of bulbs! I planted 4 peony bulbs and 8 astilbe bulbs (I was reassured that it would be OK to plant them in the summer instead of waiting for fall…let’s hope so?). I don’t really know if the bulbs will do anything this year but hopefully next year I’ll have plants! And in a few years, plants that can be divided! And spread! Everywhere! Or something. 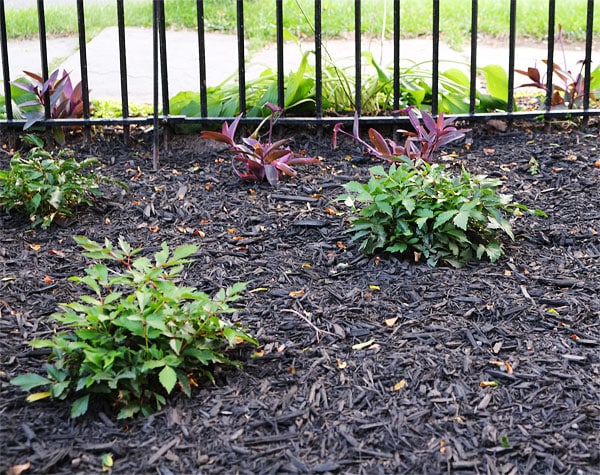 I also picked up a few astilbes on sale, since I sort of just needed some more greenery to fill the space! I like astilbes, though. These are all supposed to have white blooms but the bulbs are a mystery mixed-bag so we’ll find out together! I think maybe this spot is a little too sunny for them, so I may move them in the fall. 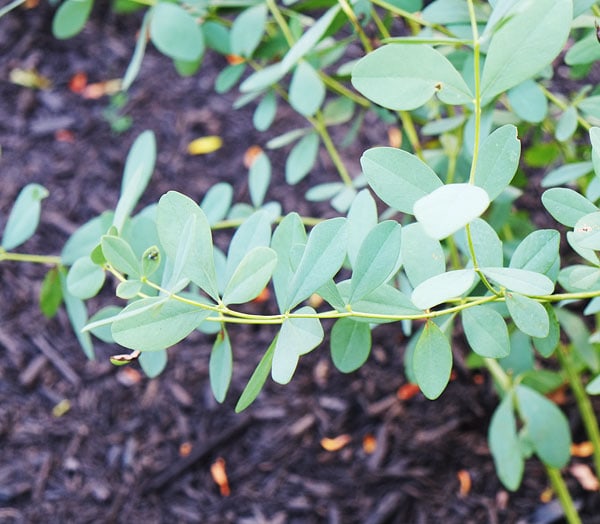 Near the front of the garden, I picked up two false indigos on sale, which I love! The minty green foliage is so nice, and they look AMAZING when they really become established and fill out. They have very soft blue flowers in spring and these wacky large seed pods the rest of the summer and into fall. They’re supposed to be pretty maintenance free and drought-resistant, which are two qualities I like in a plant. And a man. 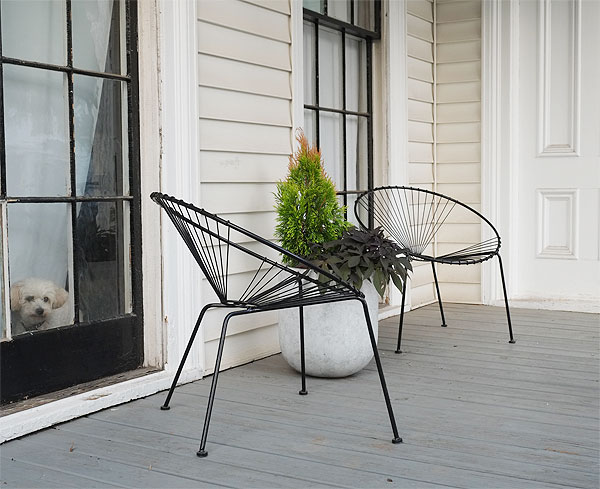 Oh hey, Linus! The dogs like to watch me from this window while I’m working in the garden. It’s so cute and creepy.

I know this is a post about the garden, but to hell with it. I’m CRAZY. I CAN’T BE TIED DOWN. Here’s the porch. I picked up both the chairs and the planter at HomeGoods, and they’re both nice! One of the chairs used to be white, but I spray painted it black to match the other one. Easy. The planter is faux-concrete and I’m relatively into it. I was a little concerned that the chairs would get stolen, but so far, so good! The chairs are pretty visually light and surprisingly comfortable and I like the kind of faux-Acapulco vibe they have going on.

I recently picked up an ENORMOUS beautiful antique crock (20 gallons!) for something stupid like $20 (maybe $30?), so I think I’d like to replace the planter with that when I get around to it. I think it’ll add some nice contrast and make the porch look less HomeGoods Happy, if you know what I mean. 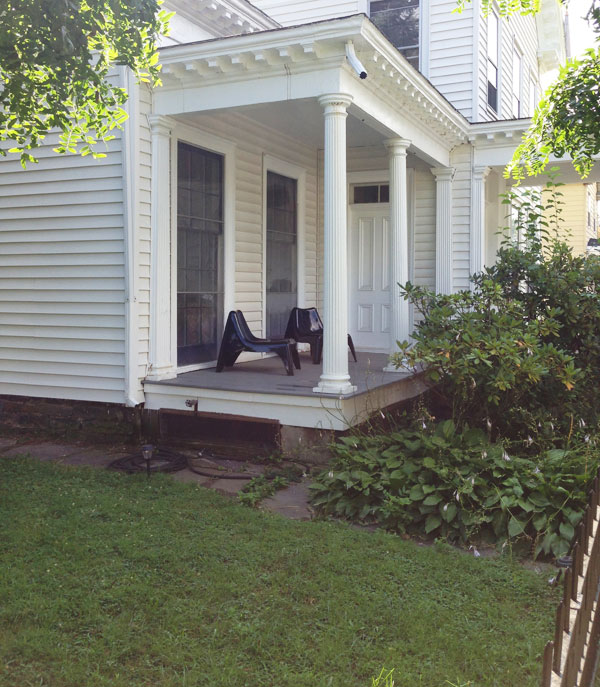 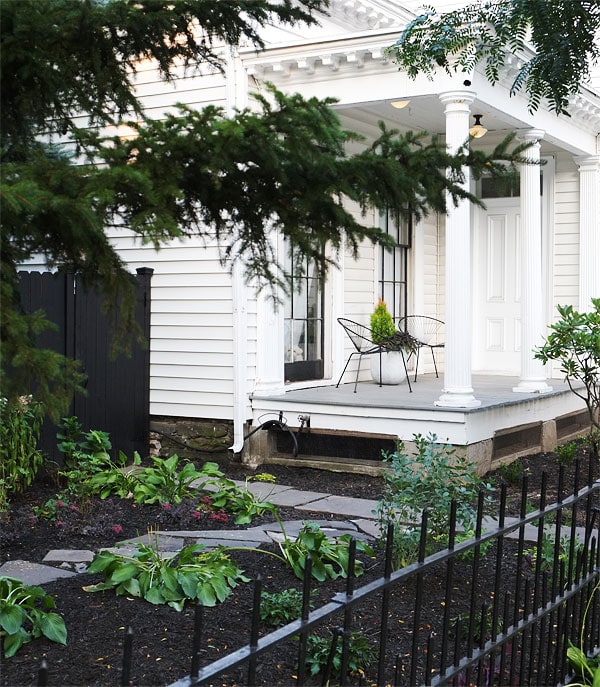 Anyway, I’ll stop apologizing for all my wilt-y hosta and just say that I’m SUPER PUMPED about how far this part of the yard has come in the space of a year. It feels really good to be out gardening after all these years, and I’m really excited to see (and show!) how things fill in and shift and change in the coming years! Someday, it’ll be a nice garden. Really. I promise. I think.

I’ve never been super serious about my gardening, but if ever there was a time to start, it’s now! I have tons to learn and tons of space to experiment, and I’m really excited about both. Before fall, I really want to make a to-scale map of the garden so that I can remember where everything is and what’s supposed to come back up in the spring (mostly so I don’t mistake them for weeds and pull plants by accident!). I also want to make a spreadsheet of all the plants I planted so I can keep track of all the maintenance required—what gets cut back and what doesn’t, what gets fertilized and when—that type of thing.

You could say I have big goals.