Thinking About Flooring in the Cottage

One of the things I find myself thinking about a lot is flooring. I endlessly, relentlessly agonize over what to do with the wood floors in my own house when I eventually refinish them, which is the subject of a whole different post. It’s best to not even get me started on the two bathrooms, either. I mean, the options just seem boundless! I’ve never felt particularly compelled to add another bathroom to my house, but I’ll admit that the idea of just getting to pick out another floor almost makes me want one. Also, sinks. And tubs. And mirrors. Maybe I just want to renovate more bathrooms?

The cottage renovation has sort of sent my obsessive flooring thoughts into overdrive. I have a surplus of floors in my life to worry about. Consequently, I’m losing my mind. Or I’ve lost it already. So let’s think this through together, yeah? 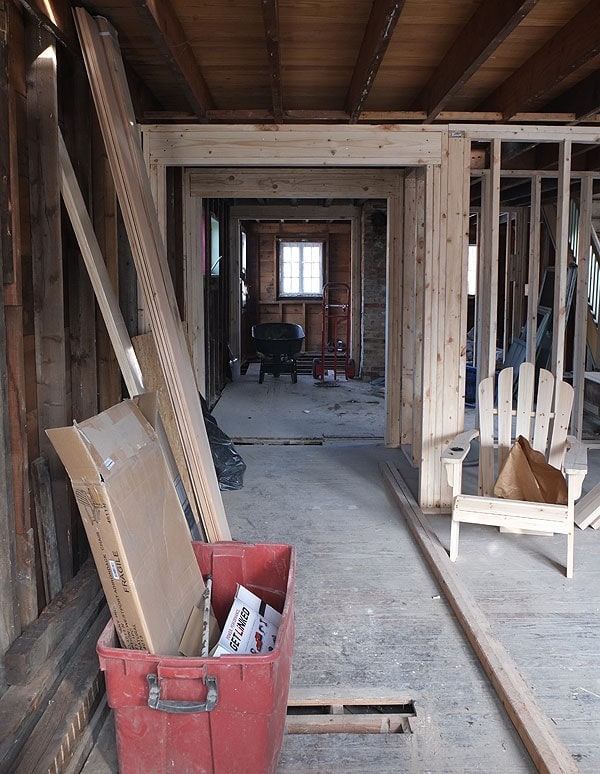 This is that familiar new view into the cottage when you’re standing at the front door. I’m still really pleased with this new floor plan—I think once the walls go up, it will feel just open enough but still efficient and cozy, like this place needs to be.

The floor has me a little worried, though. In the living room at the front of the house, there’s flooring that appears to be yellow pine. It’s in really, really rough shape, but I actually think it would refinish OK. There’s some significant patch work to do on areas where boards are missing or too damaged, but it would be doable. Another thing to keep in the back of your mind is that these floors run side to side.

Aside from that, the other notable thing about this floor is that it’s laid directly on top of the joists, underneath which is an uninsulated crawlspace. I know using an original subfloor as flooring isn’t all that abnormal in old house renovations, but I also worry about having just 3/4″ of wood between feet and a cold crawlspace in the winter. It seems potentially uncomfortable and potentially inefficient from a heating standpoint. 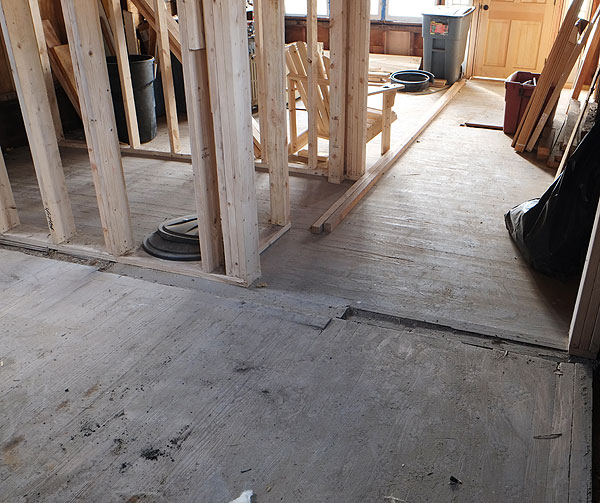 The real problems start in the dining room, which is the original part of the structure. This flooring also appears to be yellow pine, but the boards are a bit thinner than in the living room. They’re laid on top of an original pine subfloor—I think it’s hard to tell from the picture, but this means that they sit about 3/4″ higher than the flooring in the living room, which isn’t so ideal. It also means that the boards run the same way that the joists do—back to front—meaning that the flooring runs perpendicular to the living room planks. So that’s kind of Issue #1 and Issue #2: the height differential between the floors is less than ideal, and the opposing directions just makes things feel sort of choppy and awkward.

Then there’s the fact that during the framing extravaganza, the dining room wall actually moved over a few inches in order to effectively support the joists on either side of the beam in the ceiling. So all of the dining room flooring actually ends a few inches before the wall, which would be a very tricky thing to patch in and repair without it looking strange. I’d probably just end up running a couple of boards perpendicular to fill the gap, but it’s not the most glamorous solution. I’m worried about it all ending up looking a little patchwork-y. 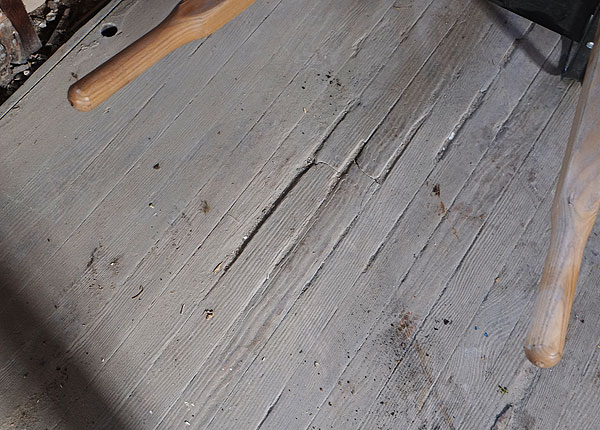 The other thing about the dining room floor is that it’s in bad shape. I think most of it would still refinish OK, but there’s definitely some advanced water damage in certain areas, and those boards would need to be replaced and new boards feathered in. Not a huge deal cost-wise, but it is just a lot of labor to put into this floor that I have other issues with already. 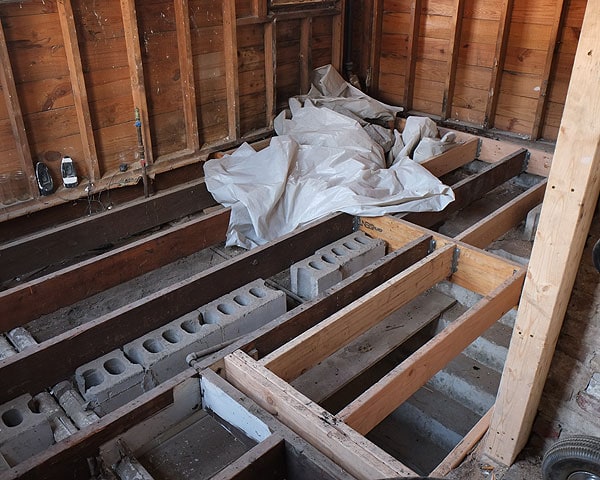 Then we have the kitchen. Now, it used to be that the flooring in the dining room ran continuously into the kitchen (which was covered in layers and layers of glued down linoleum, but still…), but unfortunately about 25% of it was way too rotted to save due to water damage, and the rest had to come up to address the structural issues, also due to the water damage…and then whatever was potentially salvageable got accidentally thrown away during a particularly insane day of demo. Anyway, the point is that there’s no floor at all in here anymore.

So where does that leave us? By my calculations, it looks like this: even if I did a good patch job on all the existing hardwoods, then put down something new in the kitchen, we’re still left with three different types of flooring, at two different levels, running through 3 rooms on this main floor, which bear in mind is only 600 square feet. I don’t know about you, but to me that just sounds…crappy.

I think there’s a solution. If I take up the top layer of the dining room floor, the original subfloor should be the same height as the existing flooring in the living room. After I put a new 3/4″ plywood subfloor down in the kitchen, everything is on the same level…and then a new, continuous floor could be laid over everything. I like this solution for a few reasons. Firstly, it would mean running all the boards from back to front, which I think would visually make the first floor appear a bit more expansive than it is. Secondly, the main floor doesn’t get a ton of natural light. Coupled with the low ceilings, I’ll admit I’m a little anxious about it feeling too dark. The condition of the existing floors and the fact that there’d have to be a lot of patch work to salvage them pretty much guarantees that I’d have to stain them fairly dark, which I’m not super inclined to do in a space that’s already kind of dark. New flooring could be left natural and sealed, which would just keep things lighter. Third, I think new flooring throughout would go a long way toward unifying the spaces. I don’t want the house to feel choppy, and I don’t want all the work that is going into it to feel too apparent. Patchy floors make it pretty clear that a wall used to be here, and a doorway used to be there—that kind of thing—and I’d rather avoid that feeling here.

One of the things I love about the cottage and I’m trying to respect in the renovation is the modesty of the house—the size, the style, the scale of the rooms, etc. I definitely want to carry that idea through to the materials, which is convenient because it saves me money and will look appropriate. In that vein, I love the idea of doing a simple wide-plank pine floor in here! The size of the boards would actually approximate the original 19th-century subfloor in the dining room, which I feel is a nice nod to the history of the house, and the knots and “imperfections” in the boards would lend some nice character for the more informal, cozy cabin vibe that I think this house wants to have.

Luckily, this stuff is cheap! Admittedly I haven’t done really any hunting around, so maybe there’s an even better price out there, but a quick look at Lumber Liquidators has this flooring coming in at $1.39/square foot! That’s pretty damn good for real hardwood. Even factoring in the extra 20% that I guess you’re supposed to order when you install hardwood, the floor would clock in at right around $1,000. I’m pretty confident that installing it myself wouldn’t be a big deal, so then I’d just be paying a bit more for tool rentals and polyurethane and stuff (some of which I’d need with the refinishing option anyway). Seems very worth it, right? 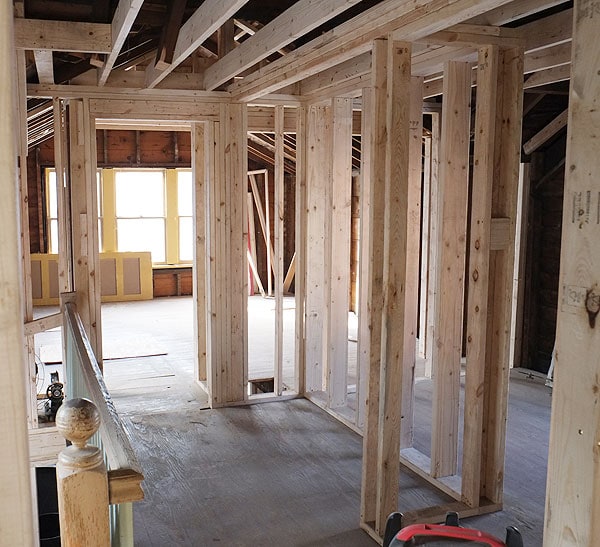 SO. I think my mind is pretty made up about the first floor. Which still leaves the second floor. Specifically, the bathroom.

The floors up here are the same yellow pine as on the first floor, and they’re in good shape. There’s definitely some patching to do to seal up some big holes and stuff, and they really need to be refinished, obviously, but I think they’ll clean up just fine. The second floor gets more natural light than the first, so I’m not even that concerned about staining them dark if necessary.

Obviously I don’t have a lot of hesitation about putting a wood floor in the kitchen or even the powder room on the first floor—I know people tend to be really anxious about using wood in spaces like that, but I’m not really one of them—but I keep going back and forth on whether I should replace the floor in the bathroom. I’ve never lived with a wood floor in a bathroom, so I can’t personally speak to the practicality of living with one, but I know some people are fine with it and some people wouldn’t dream of it. Honestly, I don’t really know where I stand! I guess if this room didn’t already have a wood floor, I’m pretty positive I wouldn’t put one in…but since it does…

Part of me feels like the floor is in good shape, and there isn’t really a reason to incur the expense/hassle of ripping it up and replacing it with tile. The other part of me feels like a potential buyer might not really want their only full bathroom to have a wood floor…and maybe this imaginary person has a point? Then I remember that radiant floor heating exists, and think about how fancy and luxurious it would be to put that under a new tile floor in the bathroom. Then I think about the previously unforeseen expense of replacing the floors on the first floor, and that the easy and responsible thing to do would be to make up for it by cutting a tiled floor for this bathroom from the renovation plan. Then I worry that I’m being penny-wise but pound-foolish because maybe somebody will really like this house but feel like a major corner was cut by not tiling the bathroom, or maybe a radiant-heated floor in the bathroom would put some other person just totally over the edge of wanting this place. Then I remind myself that if it’s that big of a deal to somebody, they could always tile the floor at some point in the future.

This is what I think about. A lot. Round and round I go.

So here’s a hypothetical. Would the only full bathroom in a house having a wood floor be a deal breaker for you? Would you prefer it? And hey—if you have a wood floor in your bathroom, I’d love to hear your thoughts about it! 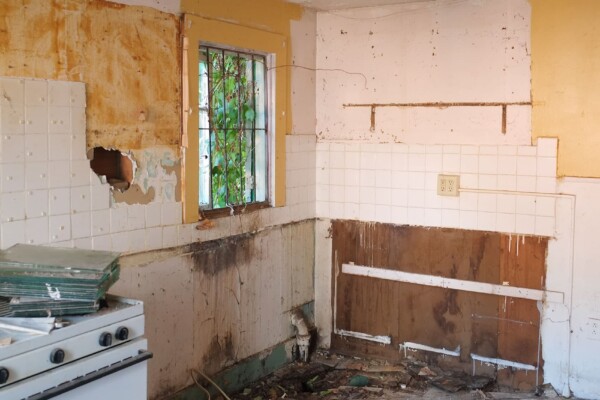 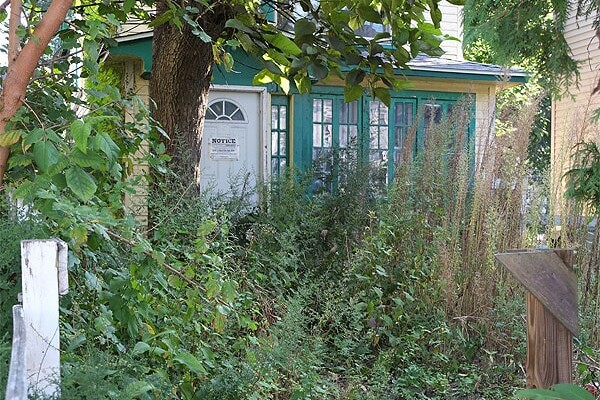 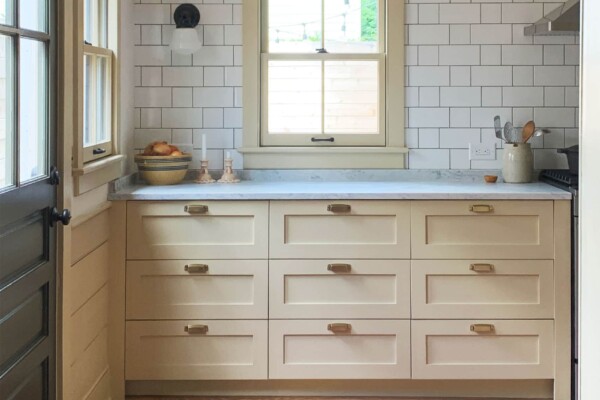