So, remember the ongoing saga regarding that weird room on the back of my house that I wanted to disappear? For SOME REASON (delusion, lack of forethought, unwarranted optimism…same shit, different post) making an entire addition on the back of a house just go away is more work than I gave it credit for, particularly when no bulldozers are involved. Imagine that.

So last time we talked about how I’d already gut the interior and removed the vinyl siding from the exterior and was gearing up for the full demolition. I could have probably saved quite a bit of work and time by renting a dumpster and disregarding the fact that there were any salvageable materials here, but that would be so…sensible and unlike me. #liveauthentic 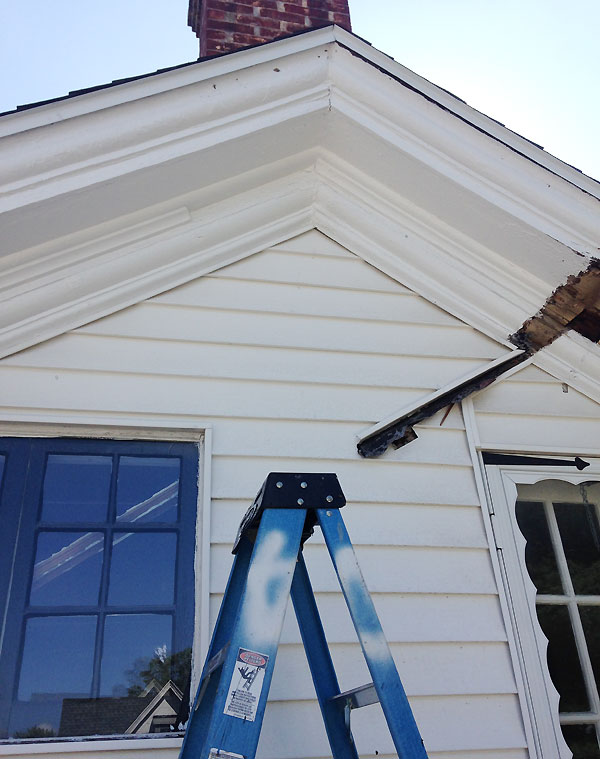 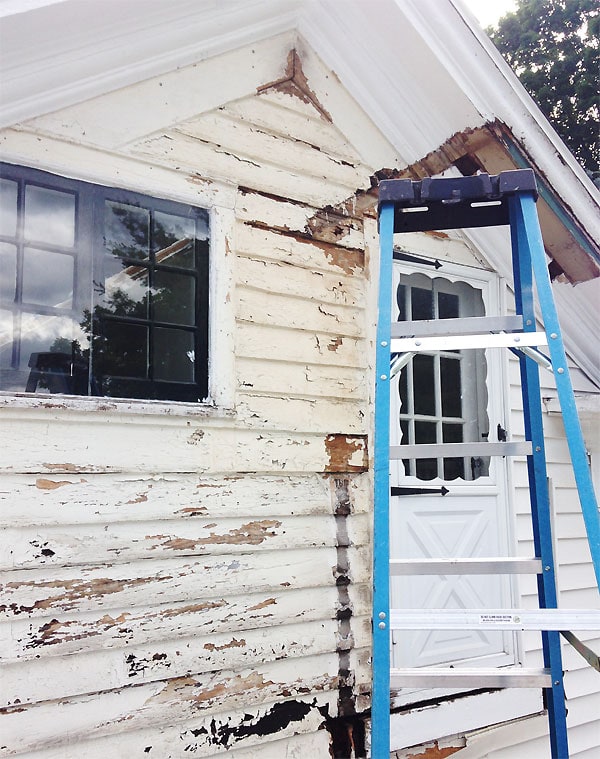 Demo actually kicked off with opening an even bigger can of worms and removing the vinyl siding from the entire back wall of the house. The interior space of the mudroom (soon to be exterior space!) didn’t have vinyl, so this seemed like a logical step. It’s not a HUGE wall, so this’ll also be a good testing ground for restoring the clapboard and removing more and more of the vinyl down the line.

This may be interesting to only me, but I swear it’s slightly important. See how in the before picture, the vinyl goes all the way up to the base of the cornice, but underneath it is actually a pretty substantial flat board that runs perpendicular-ish to the clapboard? What do we call that? I don’t think it qualifies as a fascia, but anyway…it’s something and it’s created endless hemming and hawing over what to do with the back of the house. My guess is that this second floor space was built as an unfinished attic and there weren’t doors or windows up here at all. Later on, the space was finished and that little casement window and that door were cut in and installed. To me they look funny and wrong with the corners cutting into the…fascia?…board like that, right? Like they shouldn’t be there. I’m not as anal about the back of the house as I am about the two street-facing sides, but I do want it to look nice and not weird. Now I’m wondering if the best option is to replace the door and window with two pretty narrow and slightly lower matching windows that won’t interfere with the original trim and cornice like what’s happening now. I don’t even know. Obviously it would be ideal to decide, order the windows, install them, and THEN go through the hassle of fixing up the clapboard, but given that it’s already September and I can’t make up my mind, that probably won’t happen. 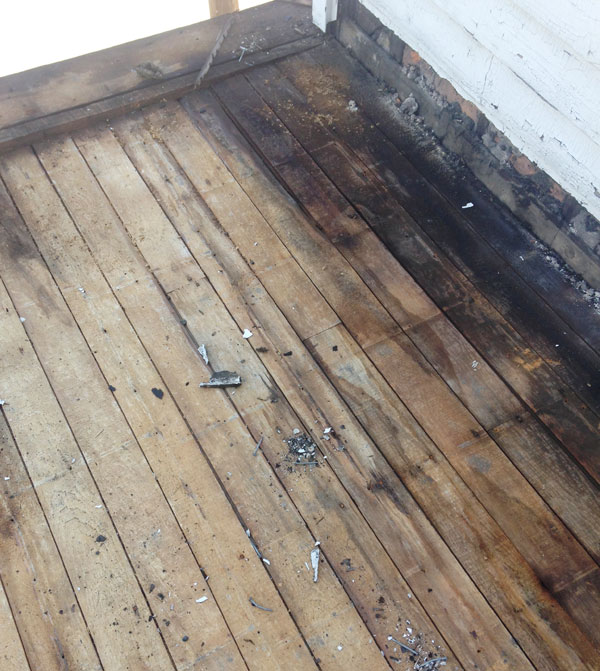 Anyway! Mudroom demo! That’s what we’re talking about here! Demolishing this room started with removing the roof. It was an old metal roof covered in layers of tar, but still leaked in spite of that. All in all, it came off pretty easily (and the scrapyard still took it, even with the tar!). We had to remove a piece of clapboard on the house because the roofing ran up under it, so that’s something I really have to fix stat.

Removing the roofing revealed that the beadboard ceiling below it was actually in much better shape than I expected! This roof was VERY leaky so I expected a ton of rot and water damage but it was in really good condition. YAY! 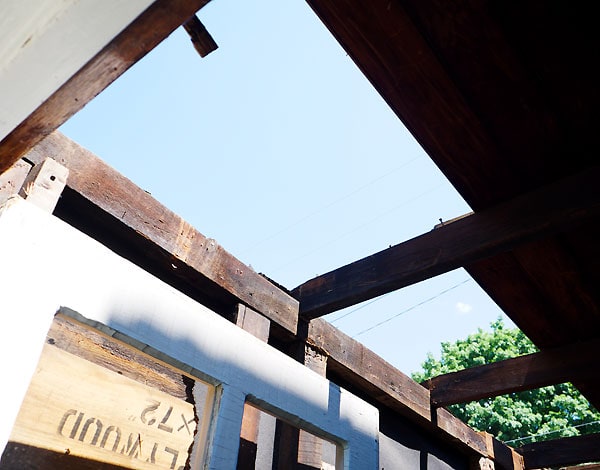 Starting at the front of the space, a helper and I removed the boards one by one from the original 2×4 roof framing. It took a little patience to get the boards up intact, but I think we had them all up, de-nailed, and stacked nicely within about an hour. 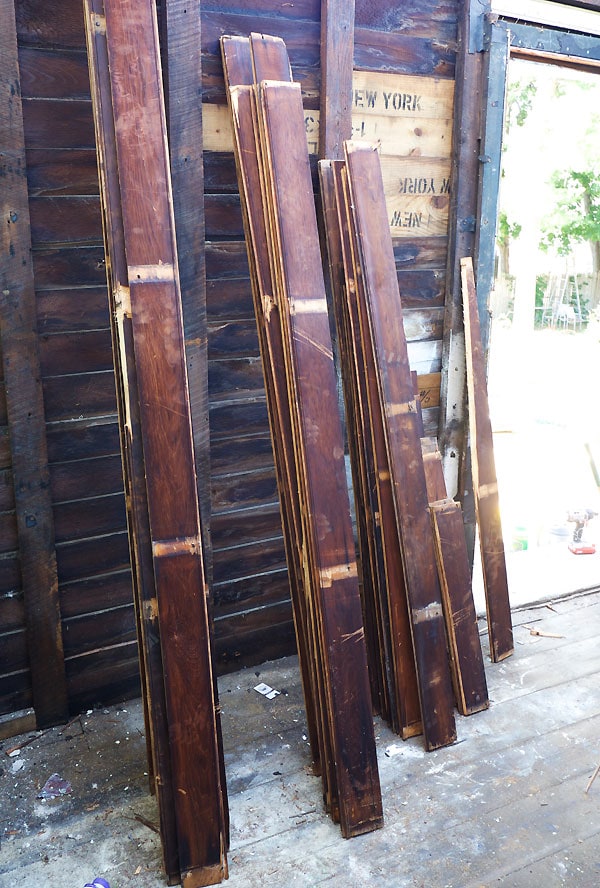 Boom! Hellllo, first floor bathroom ceiling! The first floor bathroom used to be a very small porch, but that beadboard wasn’t really salvageable during demo so I’m glad this was. Dimensionally I think it’s the same (or close to it) but the boards themselves are a bit thicker. I like the idea of putting a wide-plank beadboard ceiling back in there as a nod to what the space was originally. 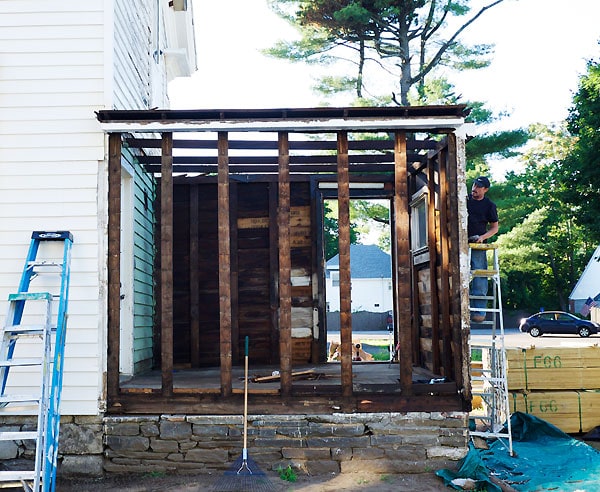 Removing the clapboard took quite a bit longer. I might have gone a little overboard, but wood clapboard like this is quite different than what’s readily available nowadays, so I just decided to hold onto EVERYTHING that wasn’t rotted in the hopes that my stockpile will save me if/when I have to patch in missing or rotted boards on other areas of the exterior down the line. They’re all piled neatly in my basement, like you might find in the home of someone who has truly lost all grip on reality.

Sometimes they whisper to me. 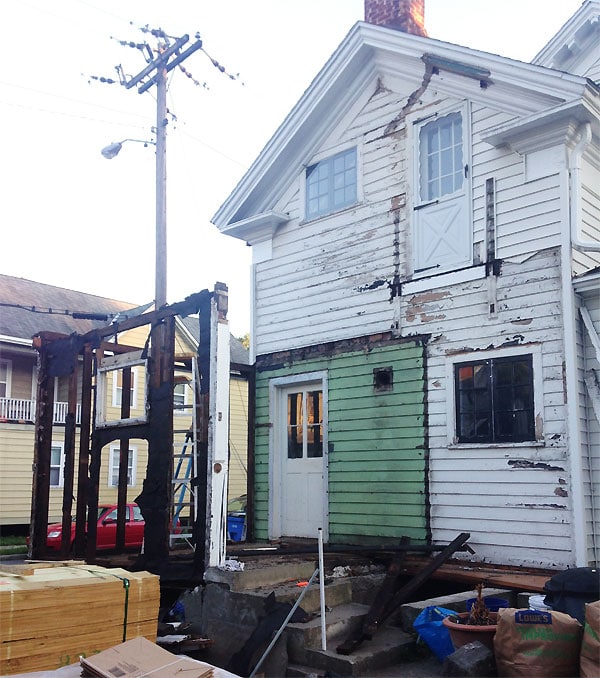 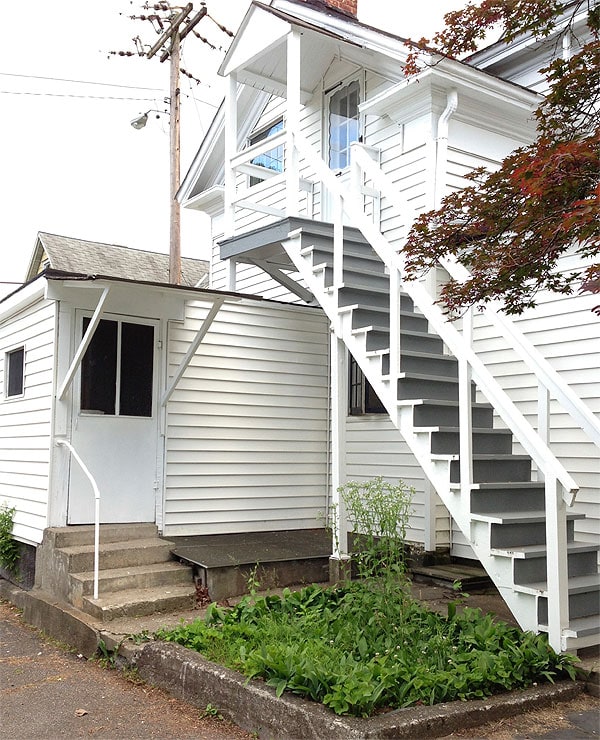 For reference, here’s that same-ish angle from when I first bought the house. I know, it’s just like one of those Spot the Difference! games where you really have to hunt around. 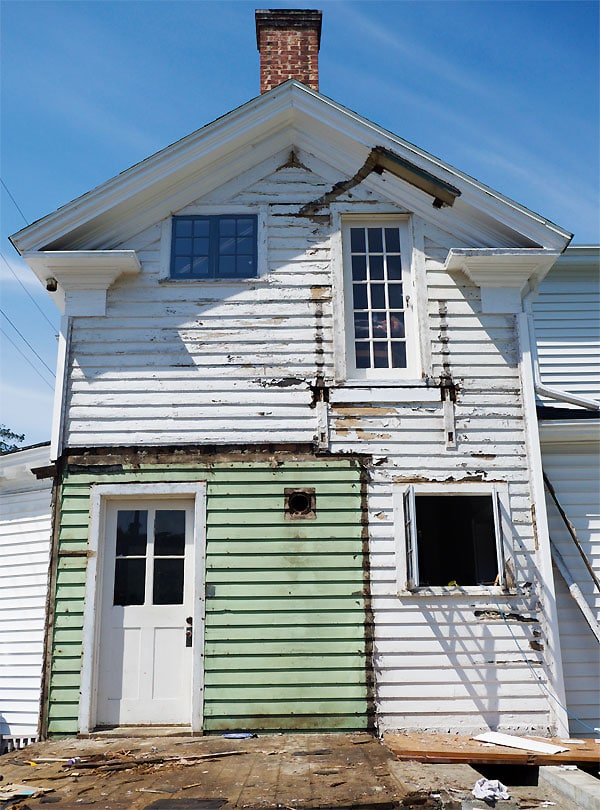 So, that’s pretty much what the back of my house looks like now. Peeling paint and missing clapboard and utter shambles and complete craziness. I know, but you have GOT to get your jealousy under control. I can feel it from here and it’s making me uncomfortable. 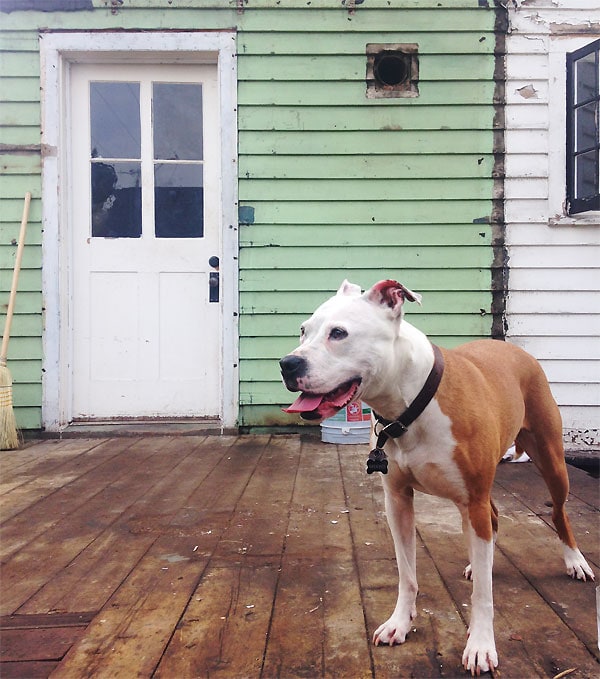 I left the floorboards and framing underneath in place for the time being so that the back door doesn’t open out onto a few-foot drop, but that’s going to go soon, too. Mekko doesn’t understand the difference between this and a back porch, so she thinks we’re living in major luxury. Little does she realize this will soon also disappear and everything will be awful again. Living with me is way fun.

You may or may not be curious what the current plans are for the covered back porch that was supposed to be happening this summer, and the answer is no way, no how. The backyard ate up more money than I realized it would and I have less money than I thought I would so that project is getting shelved hopefully for next spring/summer, which I think is actually a good thing. I don’t have to TOTALLY freak out about the back of the house—patch in some clapboard, strip/scrape, prime, paint, ya know—but I have a second now to reevaluate what I want back here and hammer out the details and all that before embarking on a semi-major construction project. I like most of the original plan, but I’m already thinking I’ll probably nix the second floor balcony concept and scale down the first floor part a little to bring it into better proportion with the house—like big enough for an outdoor dining table and a couple chairs, that kind of thing. 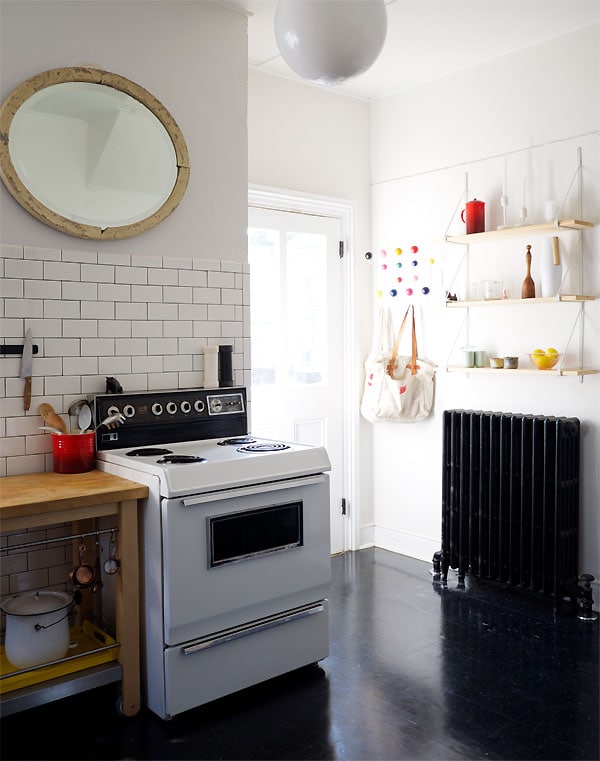 Oh! One of the majorly super exciting things about this whole mudroom disappearing act? The amount of LIGHT it brought into the kitchen! This kind of stuff is hard to convey in pictures (you can go look at the original kitchen reveal here), but it makes a huge, huge difference in real life. The eventual plan is to someday probably enlarge the window that’s currently over the sink as well as add two additional windows in the kitchen, but until then, seeing the light stream in from the door that goes to the used-to-be-mudroom is so nice. When you’ve spent two years seeing a dark brown abyss through that door and having a kitchen without a lot of natural light, this is awesome. 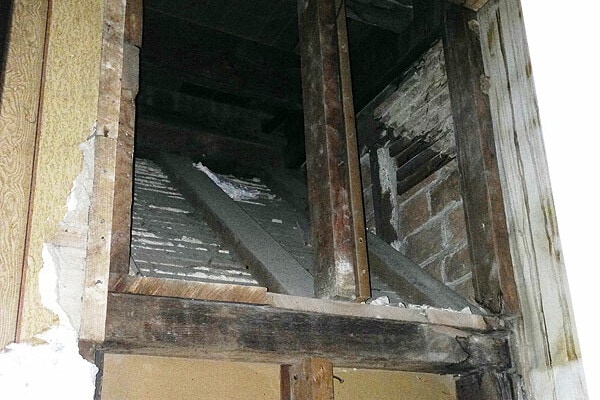 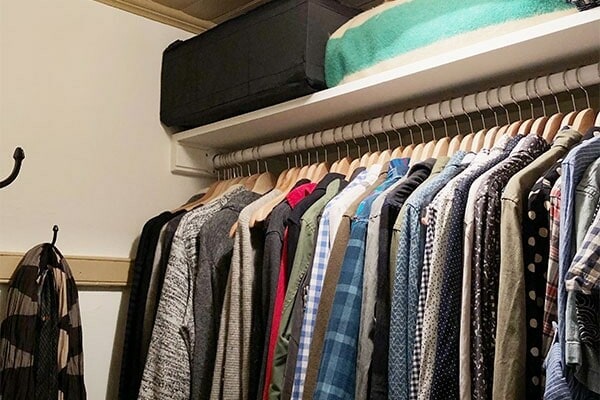 I Renovated My Closet and Now I’m Fancy. 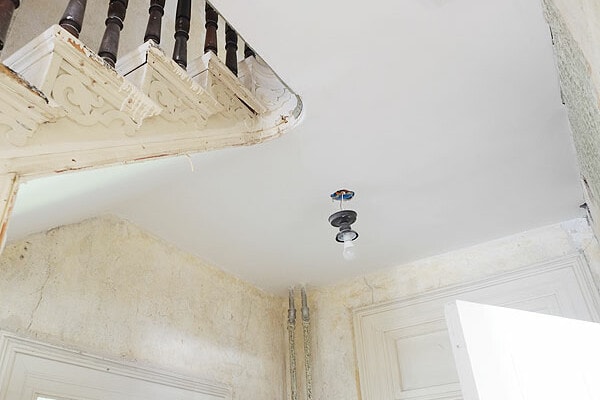 Ladies and Gentlemen, May I Present: CEILINGS!