MINE: Lighting and Lighting Parts

Welcome to another special episode of MINE, the show where I go out and buy cheap old stuff and then we play show and tell! Except I’m the only one playing! It never gets old! For me!

They say with thrifting, lightning never strikes the same place twice but I’m not sure that’s true. Point of fact, after some truly exhaustive research on Yahoo answers it appears it’s not even true when you’re talking about actual lightning. It’s sometimes true with regards to thrifting, but nevertheless I persist. I will return to that same funky watering hole 25 times because of that one time I showed up and there was a cold bottle of Fiji nobody else seemed to notice.

OK, that’s enough metaphors to last us a while. Point is, I went back up to Albany on a recent thrifting trip (friend needed interior doors, I needed to oblige my FOMO) and I feel I did PRETTY GOOD. My first stop is always the Historic Albany Foundation’s parts warehouse—I’d keep it a secret, but I love these folks so much, that wouldn’t be cool. The Historic Albany Foundation is a non-profit, so aside from a ton of other important work they do, they have an architectural salvage warehouse full of things saved from old buildings during remodels or prior to demolition. Prices are VERY fair—I can’t fault other salvage/antique places for needing to turn a profit, but it really feels this place is there to help and support people at any price point who are trying to do right by their old houses. This old house owner appreciates that a lot! 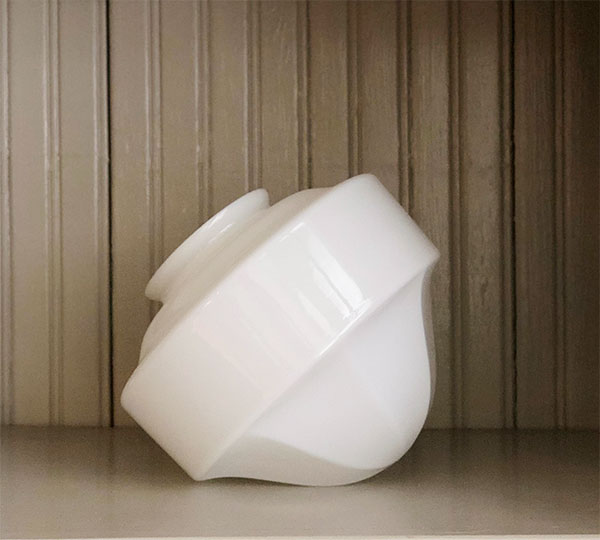 First up—such a pretty glass shade! I love that it’s so simple and versatile but still has some unique detailing. The rest of the light is missing, so this could become a semi-flushmount or a pendant. For $5, it was a buy-now-and-figure-it-out-later kind of situation. I try to keep an eye out for milk glass shades where you can’t see the bulb—I feel like LED bulbs are getting better and better looking all the time, but I still don’t really want to see one exposed. 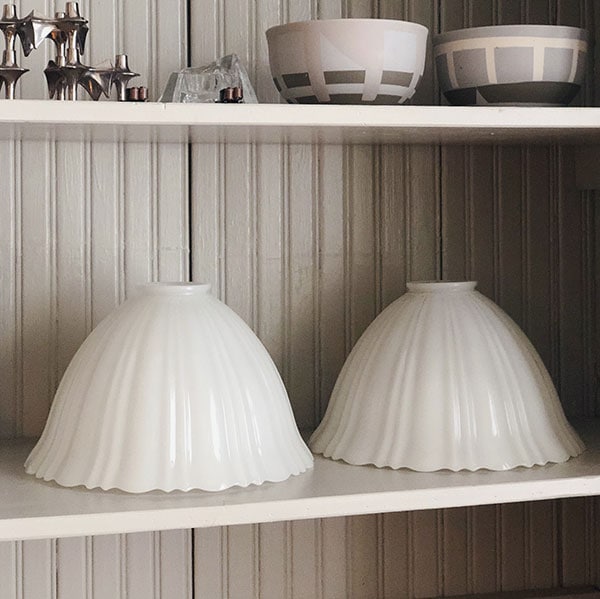 Then I saw THESE and at $20 for the pair (in PERFECT shape) it was…the same situation. So pretty! I’d guess they’re kinda late Victorian? All these shades are good excuses to design and make some light fixtures. Which really is my idea of a good time (seriously, it’s relaxing!), although coming up with the supply list is kind of overwhelming. I’ll likely order parts from Grand Brass, which my friend Allison over at Deuce Cities Henhouse uses for her slick-ass DIY light fixtures (some of which are now available as kits—so smart!). I have some ideas! I’ve been considering using them for my main kitchen fixture. Hmmmmmm.

BTW, the bowls on the shelf above are by a local ceramist named Andrew Molleur who is SO goddamn talented. I have a few of his pieces around the house, and watching his work and business evolve since I’ve lived here has been a real treat. Plus he’s a really cool nice guy. 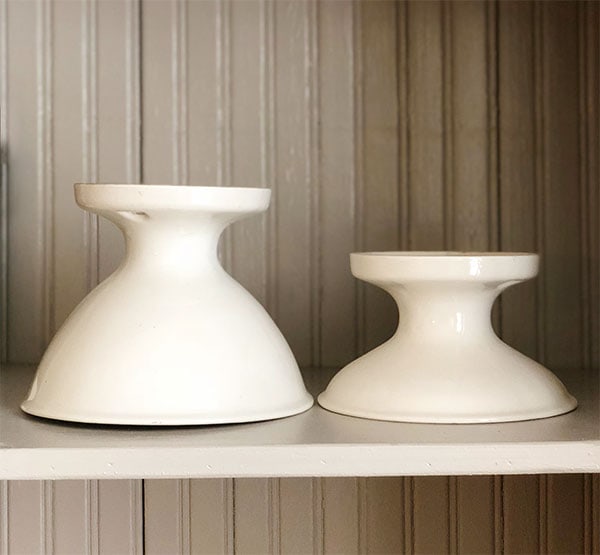 More Alabax lights! The one on the left is new (to me) and the one on the right you might remember from the last time I went up to Albany! I put them side-by-side so you can see the difference in shape/scale. 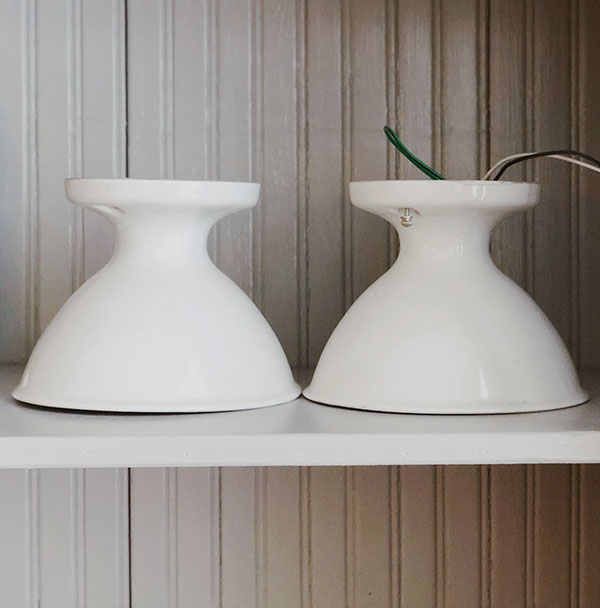 But even more exciting was that it’s a perfect mate with the other Alabax fixture I bought almost 3 years ago! What’s funny is that the one from 3 years ago was $85, and this recent acquisition was $5! The only difference is that the first one was fitted with new socket/wiring/crossbar, and the new one doesn’t have any guts. That’s a pretty easy fix, though, and it won’t cost nearly $80! I think these are both headed to the cottage, but that could change. I sort of feel like I overpaid the first time so now it’s like the balance has been restored. $45 a fixture, not bad! (that’s some Advanced Placement thrift calculus for ya.) 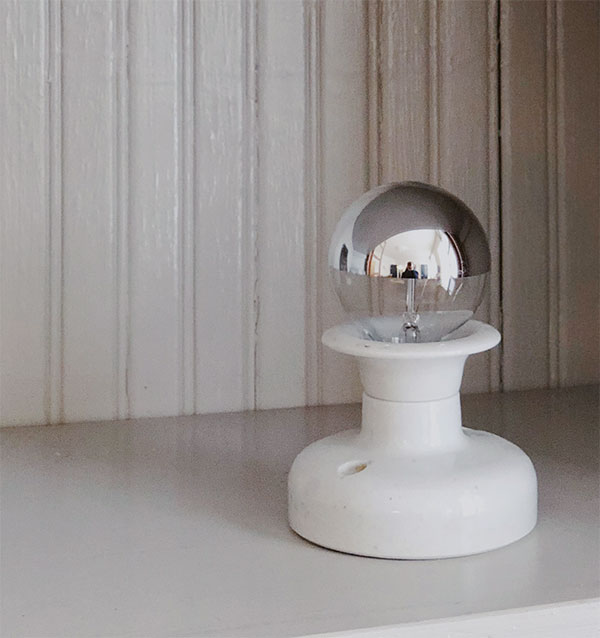 For something like $2, it just felt unethical to leave this cute little utility light behind. Even if it just ends up at the top of some basement stairs or something, still worth it. 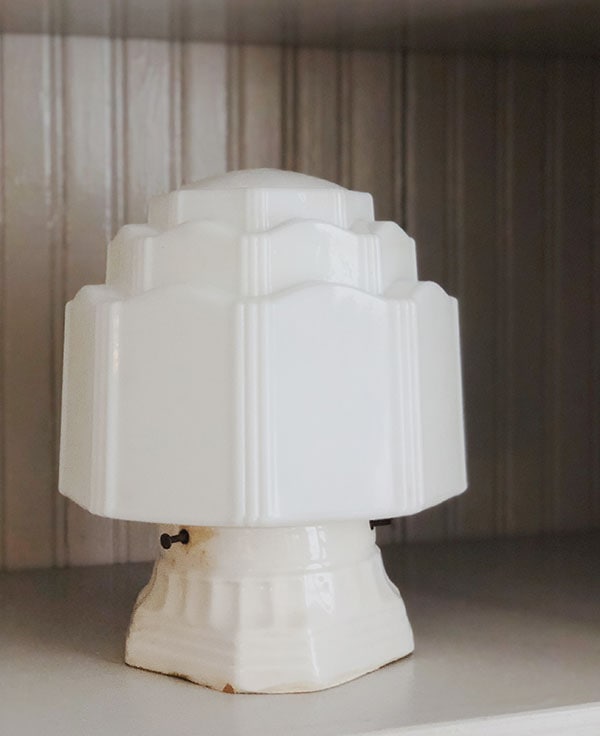 AND THEN! To round out this theme! LOOK HOW CUTE IS THIS BABY DECO LIGHT! For $10! My friend said I shouldn’t buy it because it was “just so common” and I was like “I CAN DO COMMON! I’M FINE WITH COMMON!” and it was settled. I love the detail on the porcelain base, and the intact shade is just so classic.

I know, what a diverse collection of items—ha! Does this ever happen to you? I feel like it happens to me a lot when I thrift—everything I find that day will sort of adhere to a certain theme for whatever reason.  Like the other day, I bought several things and they were all green. Since I feel I’ve done my scientific research for the day with the aforementioned lightning thing, if anyone can shed some light on this phenomenon (I didn’t mean to write that pun, but once I did, I wanted everyone to endure it), I’d really like to hear it. 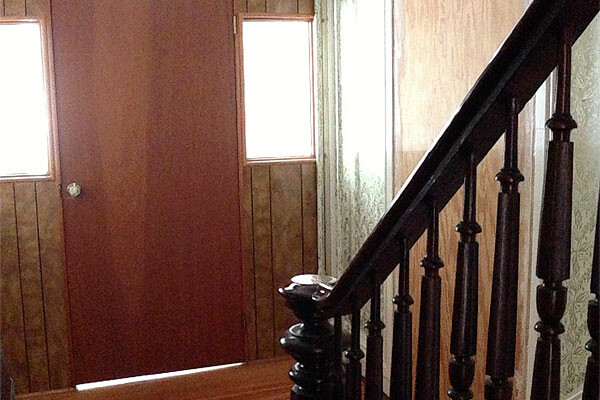 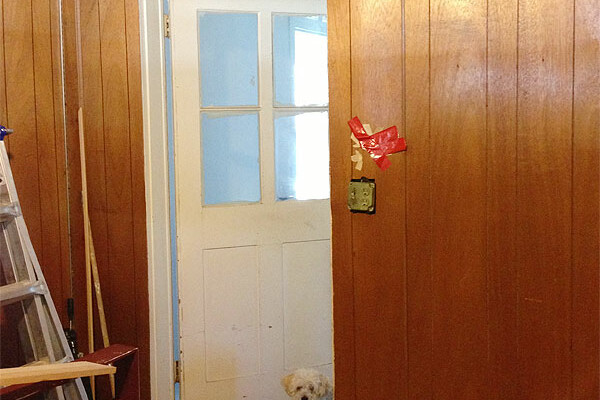 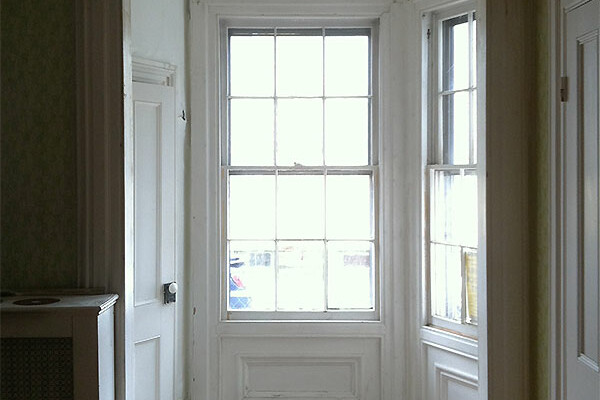