When we first looked at our apartment, I was so distracted by the separate kitchen and the living room larger than a postage stamp that I didn’t even notice the lack of closets. Even the teeniest, tiniest apartments we looked at all had closets, if I recall. So once the real planning started, this dearth of usable storage space raised a few questions. For instance: where do I put all my shit?

We do have one closet, in Eva’s room. But given that her room is quite small, I don’t think it’s fair to use this as a catch-all storage space. I mean, let’s think about all the things you have to store, besides clothing. A vacuum cleaner, a ladder, suitcases, extra linens, spare lightbulbs, oppressive security gates you stripped off your window like a total badass, secrets… and that’s just off the top of my head. 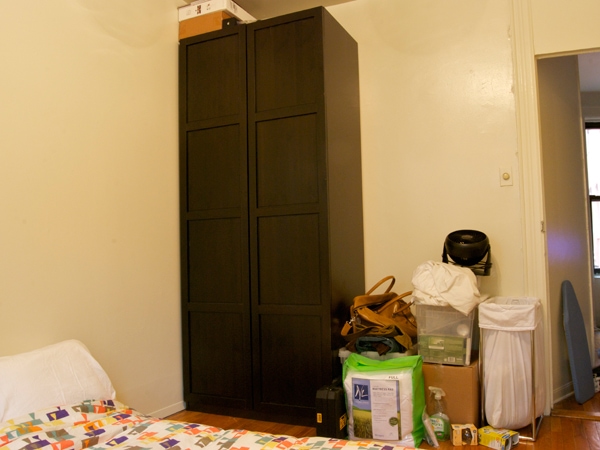 Blessing or curse, my room didn’t come completely devoid of storage. Instead, there was actually the biggest wardrobe imaginable, presumably left by a previous tenant. I think once they realized it wouldn’t fit through the door without being disassembled, they just said “screw it, just leave it here.” That right there is the Ikea PAX wardrobe, measuring in at a whopping 93″ high, 39″ wide, and 2 feet deep. Someone ate their Wheaties.

My first instinct was to get rid of it. It’s so large that it felt kind of oppressive visually and physically, but more importantly it really wasn’t taking advantage of the space in an efficient or logical way. If we’re talking storage, let’s use that whole wall, right? Or at least something less massive-like-it-could-crush-me-in-my-sleep. I knew I could do better.

I considered a few different options. Ikea makes a number of more compact storage units that would have been a great fit on this wall, perhaps using the top to hold some nice-looking storage boxes or something of the sort. Then I thought about removing the doors on the existing unit, building some kind of modular shelving system next to it, and curtaining the entire thing off. I also considered one of those “I’m so post-modern” closets using a plain metal clothing rack, some shelves, maybe a dresser– in a I-don’t-give-a-fuck-but-really-this-is-super-neat-and-curated kind of way.

In reality, I’m not freakishly neat enough for much open storage, nor am I really comfortable letting it all hang out like that. I also own more than a dozen hanging garments and my clothes don’t form any sort of subtle, artistic gradient when hung together (more like Plaid threw up all over his friends, Grey and Denim). At the same time, since this storage solution isn’t something that’s likely to extend beyond this apartment, it’s nothing I wanted to spend too much money on in an already tight budget.

So in the end, the best solution was turning lemons into lemonade. I’m saying this optimistically because there’s still a ways to go. But on Sunday, I took a trip (on the ferry! Really fun and pretty!) to my favorite Scandinavian furniture superstore to make that enormous PAX work for me. Before I left, I wrote out a list of everything I’d have to store and tried to find places for almost all of it. Or at least the big stuff. Then I left for Ikea with a very precise plan:

So in the middle of the Ikea, I was at a crossroads. Go with the 29″ unit anyway and either make my own door/go back to the curtain solution, or go with the 20″ unit and sacrifice 9″ of storage. After about 30 seconds of strenuous deliberation, I went with the 20″ and got everything home delivered yesterday. 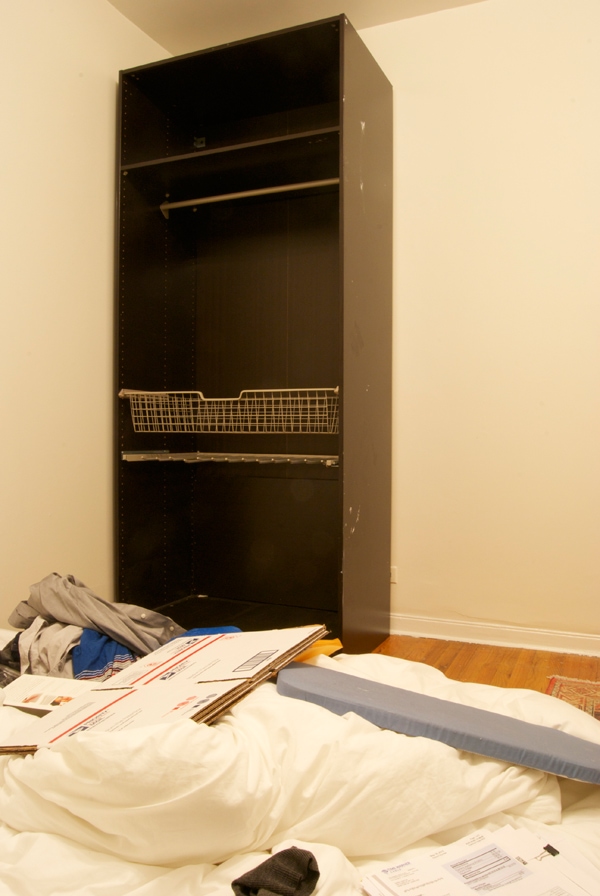 So when I got home from Ikea, I got to work. One of the things I really disliked about this thing was the color. I think the trick to dealing with really massive storage like this is to visually minimize as much as possible, but this thing couldn’t have possibly stuck out more. So I removed the doors and all the components, all of which I’m selling on Craigslist except the clothing bar. Then I sanded, primed (2 coats!) and painted. 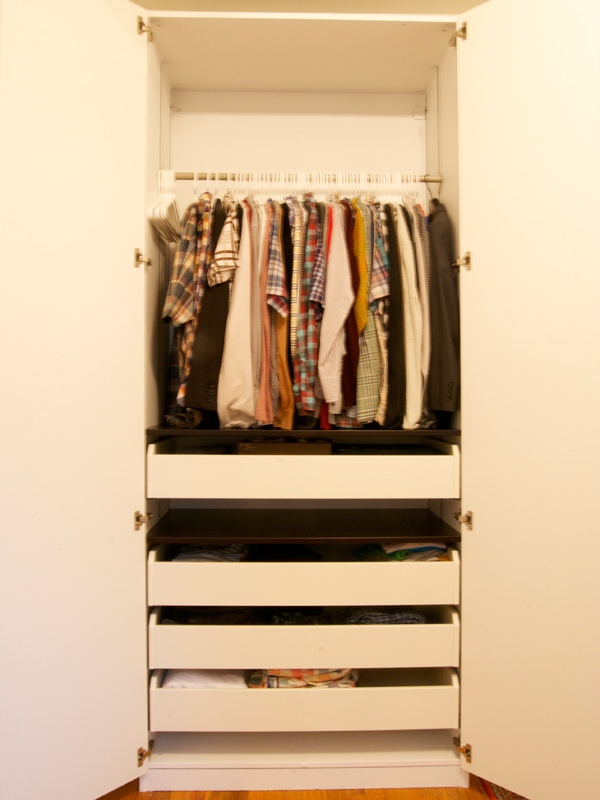 Unfortunately the new PAX was broken upon arrival, so Ikea should call me tomorrow to arrange a replacement. And despite my best efforts, things didn’t exactly go as planned with the drawer components– I didn’t account for the placement of the door hinges, so only four of the five drawers actually fit in the end. I might rearrange things a little bit (definitely a shelf above the rod, for starters) since it’s important to squeeze every last usable inch out of this thing, but for now I’m just glad my clothing storage no longer looks like this:

Yes, those Harry & David boxes were storing my socks and undies. Deal wid it. 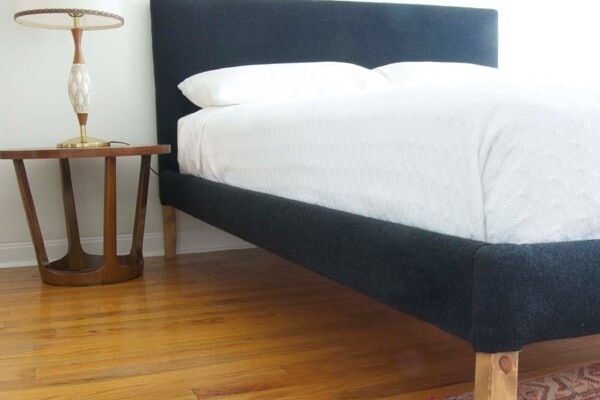 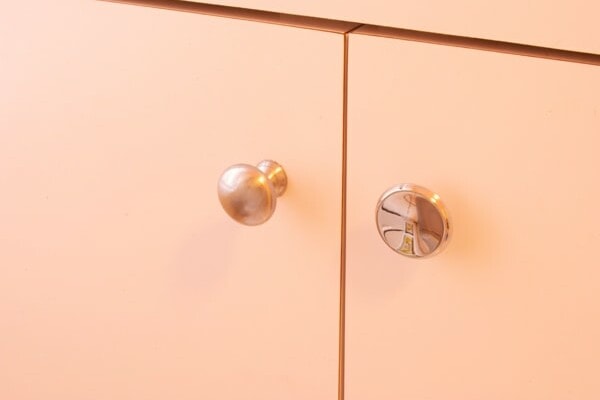 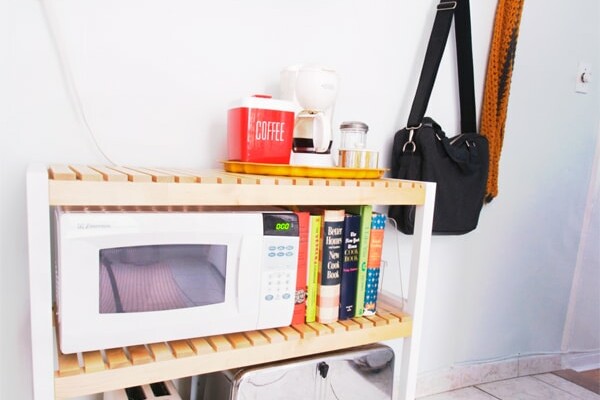