There are a bunch of quirky things about our apartment, among them the doors to our bedrooms. What follows is way more detail than you or I ever wanted to know about our doors. But I’m giving it to you anyway. Because that’s just the type of generosity (narcissism) this blog is all about. Here’s a picture of them from before we moved in: 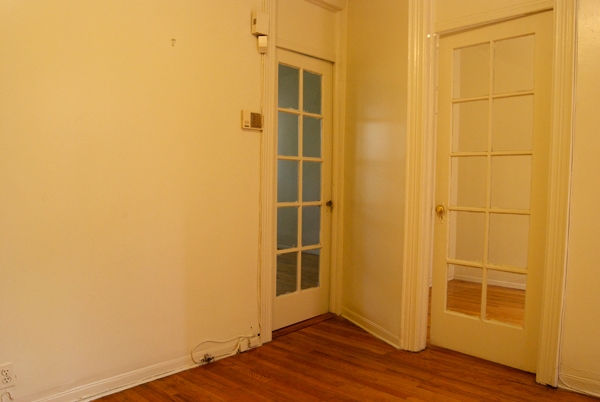 There’s definitely something charming about our old, pre-war doors. I don’t really know how old they are, but they’re solid wood and way more interesting to look at than the 60s hollow-core bathroom door. And the wavy-glass windows let a lot of nice light travel through the apartment, which is a big plus since some of our windows provide sweeping views of brick walls and other peoples’ kitchens. But they’d seen their share of sloppy paint jobs, and for a couple of roommates, the glass doors are just a little weird.

The hardware had all been painted over a bunch of times, and because I like to make things difficult, I decided to take the doors of their hinges and remove all the hardware. Cue the utility knife, paint stripper, putty knife, screwdrivers, and quietly whispered expletives. 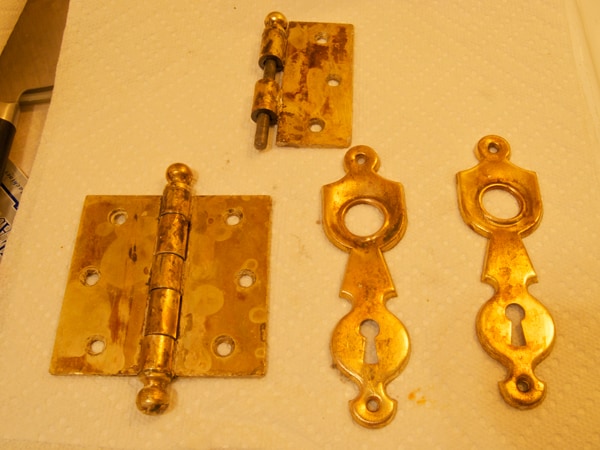 Then I boiled it all in water with some dish soap in a specially designated pot I picked up from the thrift store down the street. This is the cheap-o version of the crock-pot method, but it seemed to work just as well. Most of the paint peels off really easily after it’s all cooked for a while, but the little crevices needed some toothbrush persuasion. 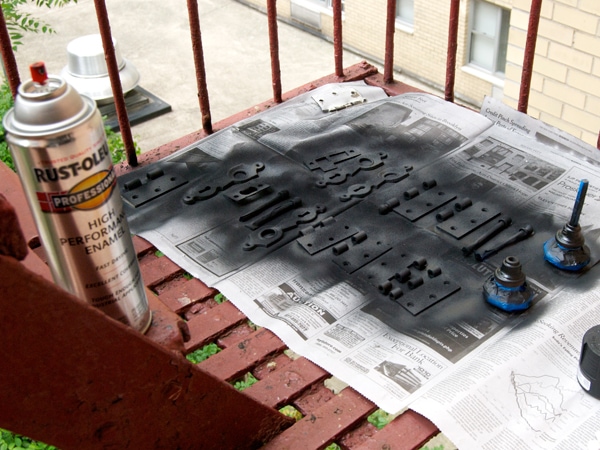 I sanded all the pieces lightly and then hit them with a few coats of  Rust-oleum matte black spray paint out on the fire escape. Meanwhile, I was busy painting the doors on our living room floor. It was quite a production. 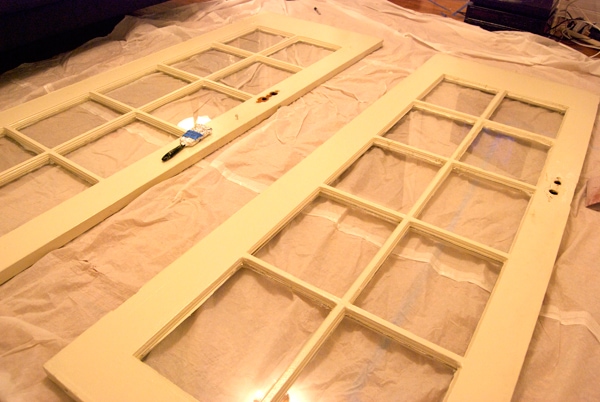 But after the hardware and doors were back in place, none of that work did anything to solve the privacy issue. The obvious solution would have been some kind of fabric curtain made for french doors, but that all seemed a bit frilly for our place. I’d been planning on using frosted glass window film I’ve seen used many times before and have actually used myself. Usually, I’d recommend it: all it takes to apply is some careful cutting, a spray bottle full of soapy water, and a squeegee. It looks great when it’s up, provides privacy, still lets in light, and most importantly is really easy to remove and doesn’t leave any sticky residue. So I bought some (from Ikea, but Home Depot carries wider rolls for a little more money).

But once I put up a few testers on a couple of the panes to see how it would look, I wasn’t happy with it. Because these doors are individual panes (the old fashioned way, y’all) and the glazing around the panes doesn’t form perfectly straight lines like you might find on a new window, there was no way to get the frosting film perfect. It didn’t look terrible, but I didn’t like the way there were accidental slivers of light around the edges or the air bubbles that formed where an edge wasn’t making direct contact with the glass in some places. And those bubbles really only get worse with time.

So I weighed my options. I went back to curtain solutions but that seemed both a little pricey and I didn’t find any I liked, which would have meant sewing. Which I can do, but it seemed like a lot of effort for something I wasn’t really digging anyway. I researched some aerosol spray-on window frosting that doesn’t actually etch the glass, but I read mixed reviews on how removable it was and it didn’t sound very durable (it-looks-good-as-long-as-you-don’t-touch-it. Ever.). I considered double-stick taping on wallpaper or something, but that would have looked awful unless I did both sides, and even then I’m not convinced it would have looked good. It also would have blocked the light.

I had read a couple years ago about a process of applying fabric to walls using cornstarch– a renter’s alternative to the semi-permanence of wallpaper. So I hopped on the internets and found the original post where I read about it and then was reassured by an Apartment Therapy post on the topic that it would be fine for windows as well. 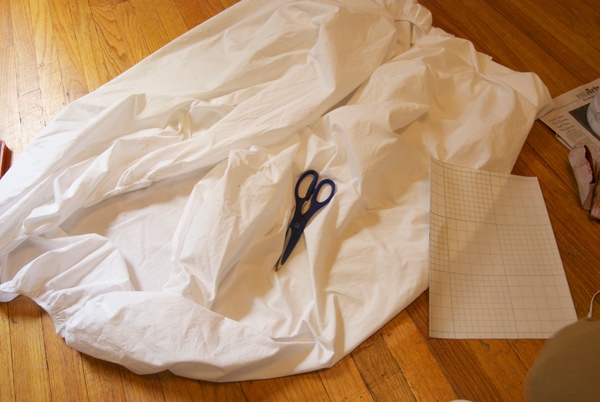 I decided to hack up one of the fitted sheets that I bought for my dorm’s twin extra-long bed, using one of the test panels of the frosted glass as a guide. I just lightly traced it with a pencil and cut out ten rectangles to fit the panes. 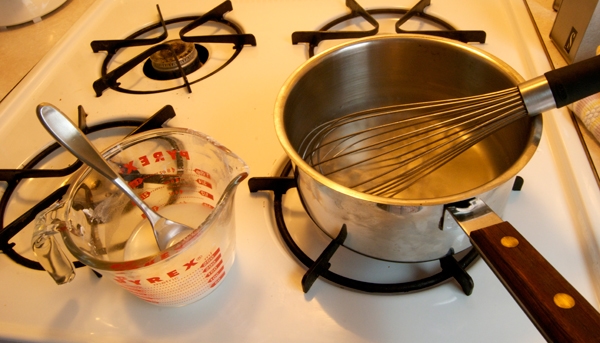 Then I made the paste, which is just regular cornstarch and water. I used two tablespoons of cornstarch dissolved in 1/4 cup of water, and then added it to 2 cups of boiling water. This forms a sort of thin, misty, perverse-looking jelly. 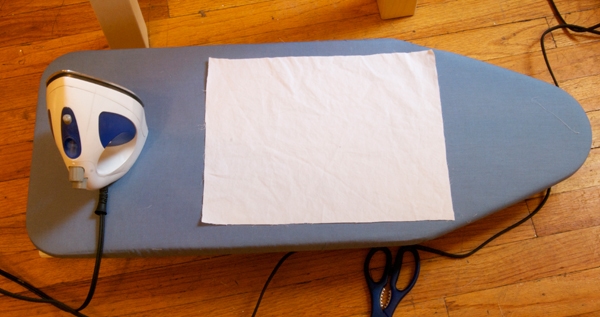 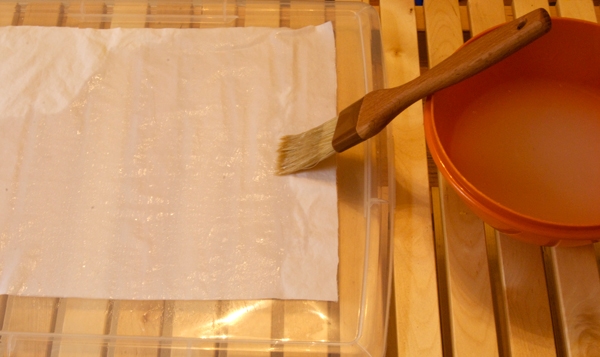 Make sure the windows are nice and clean and apply the paste liberally to the back to the fabric. A chip brush might have been more appropriate than my pastry brush (its first use, appropriately, being for something like this instead of food), but it doesn’t matter. Then slap the fabric into place and use a squeegee (or credit card or anything with a hard, straight edge) to squeeze out bubbles and, as it turns out, lots of the paste you just brushed on. Have paper towels on standby. After that’s done, I lightly painted a coat of paste to the front, making sure to cover the entire surface but light enough that it wasn’t gloppy. 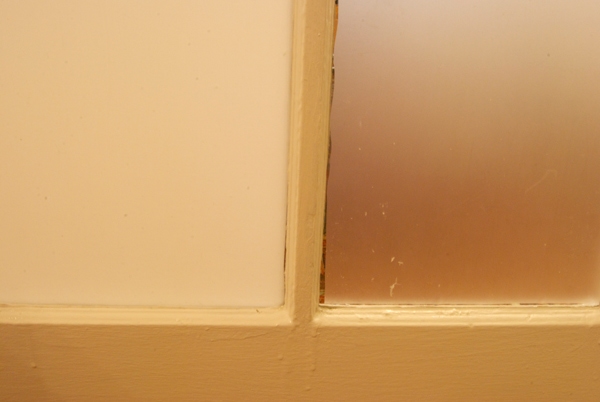 The fabric is much more forgiving than the film, as you can see in this side-by-side (fabric on the left, film on the right). I did cut the fabric slightly bigger, but you don’t have to worry about it bubbling around the edges because the fabric will stick to anything. 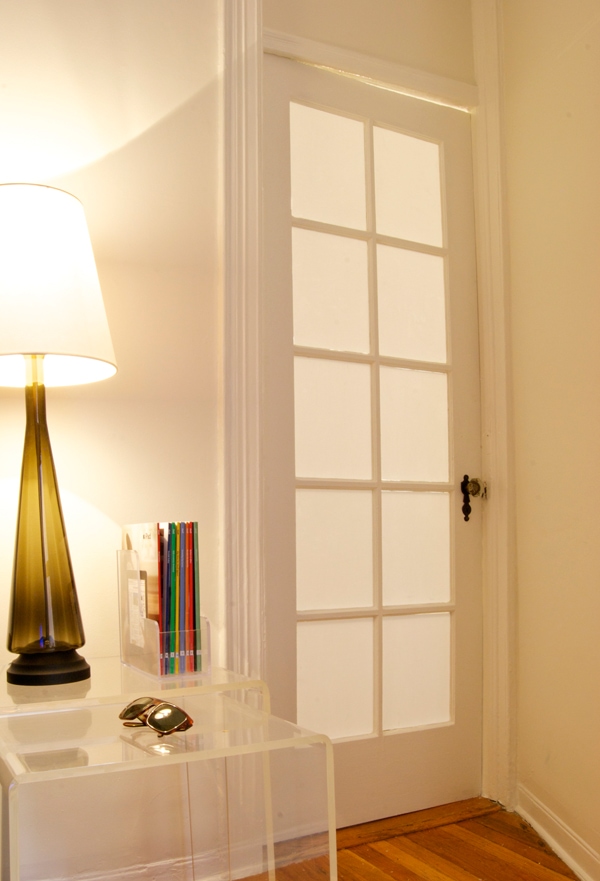 And here it is today after it all dried overnight. I can report that the starch seems to be holding really well and doesn’t look crusty or weird. And while a couple of the panes could use a re-do with a slightly bigger piece of fabric, I’m happy with how it turned out. Even more privacy than the window film, still lets in light, fully removable, and no harsh chemicals or specialty products. And not counting the previous cost of the window film (about $6 if I remember correctly), the whole project only cost $1.99 for the cornstarch, of which I still have plenty for the next time I whip up a refreshing vat of gravy or remove some errant blood stains. Plus, the project was so easy that we can change it up with a different fabric at some point in the future. But for now, I’m just going to go lounge around naked in my room. 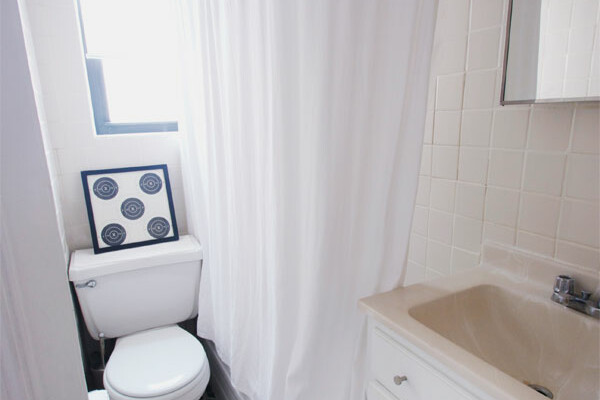 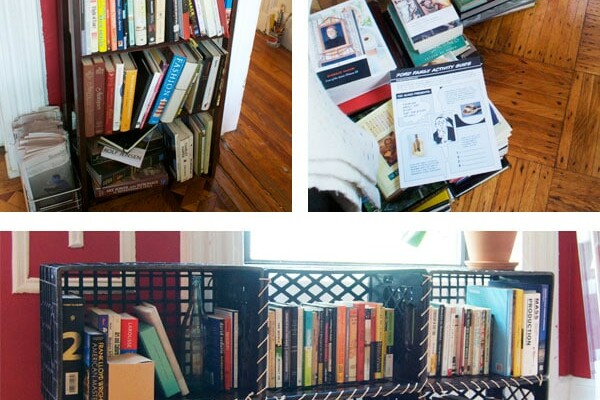 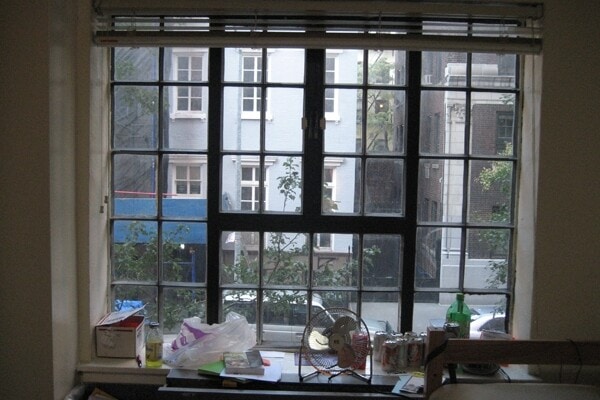