Not for anything terribly exciting, mostly just collecting all the basics. Even though I did this myself not too long ago (although I came to my apartment with the vast majority of my kitchen stuff, hoarded from my last apartment), I kind of forgot just how much stuff it takes just to get a new home up and running. Cleaning products. Bathroom organizers. Kitchen tools. It all adds up to a whole lot of running around. These shopping trips were fun for me, as I got to role-play as my mother. Trying to remember that this is Chandler’s apartment, and she needs to make her own decisions, it’s my task to gently give unsolicited advice to guide her in the right direction. It’s a delicate job, but some drugged-up-tissue-toting best friend’s got to do it.

There was Fred Meyer for cleaning supplies, where we bought a beast of a vacuum, marked down $60. There was the first shopping trip to Bed Bath and Beyond, then the second, then the third. There was Sears and Target and Walgreens. Oh, and Ikea. Twice.

Chandler hates IKEA, which is something I’ll never quite understand. Not the merchandise, necessarily, but the experience of IKEA. She loathes the trek through the showroom, what with all its tediously modelled rooms, and the way it’s generally organized. She gets grumpy about the other shoppers and becomes overwhelmed in the chaos of the Marketplace section. Getting her to go is like pulling teeth. So you can imagine how thoroughly exciting it was when we got to the KARLSTAD sofa section at the end of a very long Day 2 and discovered no available sofas. Apparently, the Portland IKEA only receives 4 KARLSTAD sofas every couple of days, and we were told they’ve been popular. I mean, no shit, they’re always popular. So we decided to go back when they opened in the morning, bearing looks of staunch determination lest the need arise to intimidate any competitors. We had to slip by the “Welcome to Ikea!” person at the entrance and head in the back door, leading straight to the enormous flat-packed furniture section. That couch was ours, and we weren’t fucking around. 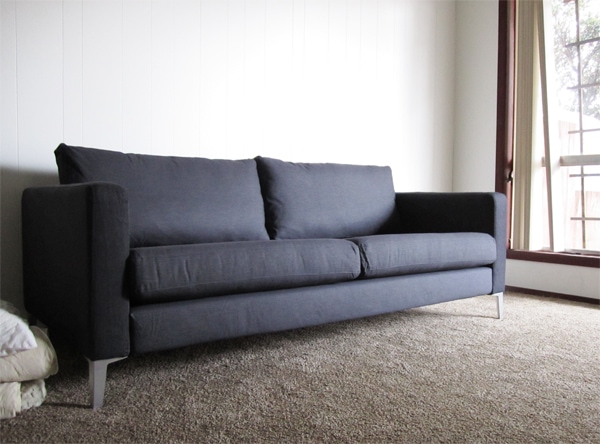 Sweet success. Another KARLSTAD sofa with the Sivik Dark Grey cover and aluminum legs. It’s just like home! After Chandler went through all the same painstaking affordable-sofa-that-isn’t-ugly googling that I did, we ended up at the same conclusion. The KARLSTAD really is a great couch, and the price tag really just can’t be beat. Oh, and I put this thing together in just under an hour. It might have been the cold meds talking, but I felt like a superhero.

The other super-duper-exciting shopping trip was to the Container Store. Chandler and I both love the Container Store, even knowing that realistically most of their stuff is overpriced and comparable items could be picked up cheaper elsewhere. But that doesn’t stop it from being amazing. We could spend days roaming those aisles. Even better? Chandler had a very generous gift card to spend… so you can imagine. Talk about a high you’ve never had before.

We got this cute little paper towel holder. I’m generally not a fan of Umbra stuff, but we both kind of liked the retro style of this. And the little sponge tray thing. 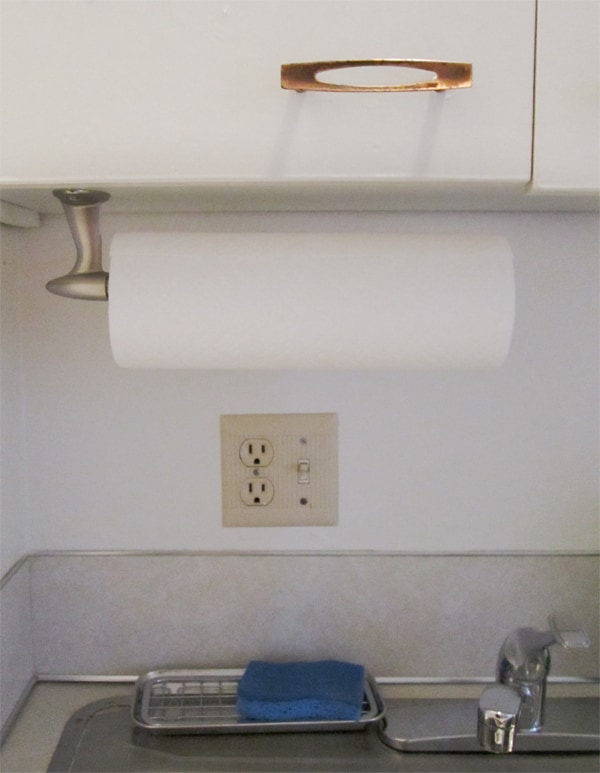 We also got this tension shower organizer, which was actually the same price as the cheap over-the-shower-head caddy but a lot more out of the way. I can’t decide if it’s ugly or not, but it’s in the shower anyway, it holds a ton, and it’s nice to not have shampoo bottles falling over in front of the shower head and spraying water everywhere. The new shower curtain rod came from IKEA (the LILLHOLMEN), the rings and liner are from Bed Bath and Beyond. Still looking for a shower curtain to go over it. 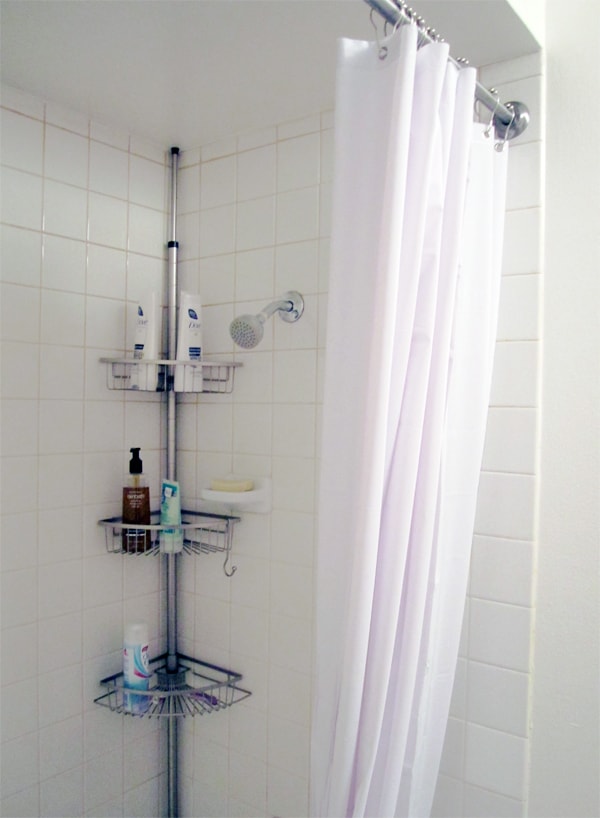 On Day 4 we went back to IKEA (trip #3, for those who are keeping track) and picked up the very pretty STENSTORP kitchen cart to fill up the hole where the washing machine used to be in the kitchen and to hold the microwave. 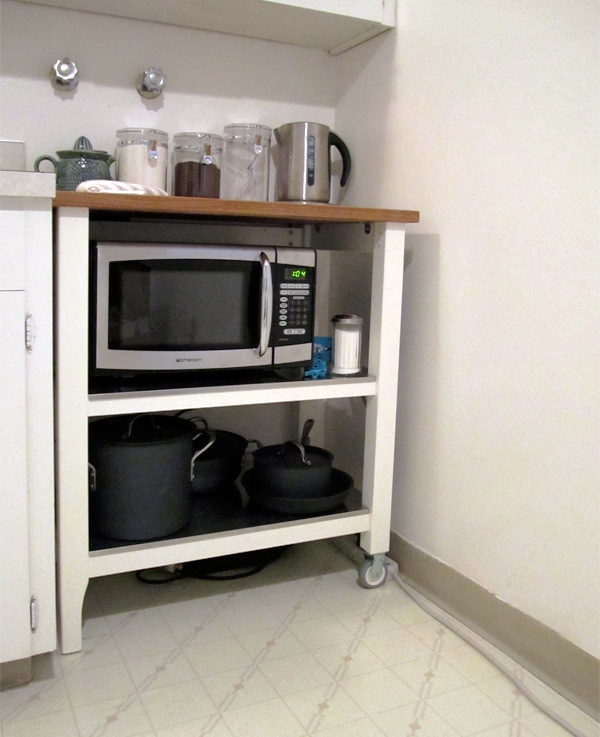 We left off the top front panel so that the microwave can open, but I think it looks fine without it and it seems just as structurally sound.

The other thing we’ve been doing a lot of, besides shopping, is planning. I really want to replace that kitchen floor (it’s up in the air right now), and Chandler really wanted to paint her bathroom. So off to Home Depot we went, totally exhausted, to price out a new floor and pick up some paint chips and a few assorted tools.

We’re contemplating VCT. The guy explaining VCT to us at Home Depot made it sound really high maintenance, telling tales of having to buff and polish and wax and strip the finish every two years, which is making us think twice (I’ve gotten over it after being reassured by Anna at Door Sixteen, but Chandler’s still skeptical). It would cost about $100. Any thoughts, y’all?

We also picked up a bunch of paint chips for the bathroom. Chandler knew she wanted a light sea foam green bathroom from the get-go, so that’s what we’re doing. These were the contenders (just the lighter hues). 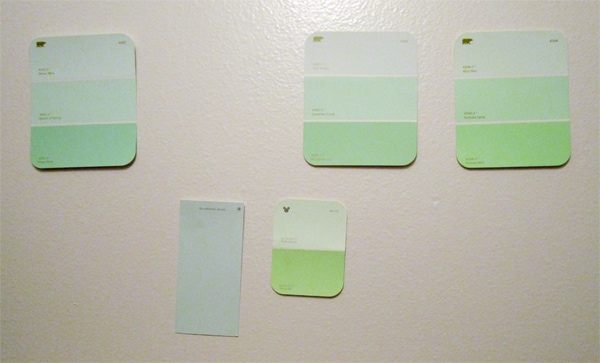 P.S.- We finally got internet today (Day 8!), so hopefully I’ll be posting much more regularly from here on out!

P.P.S.- Portlandites! Where’s all the good thrifting at? Tell me everything you know. READY, GO! 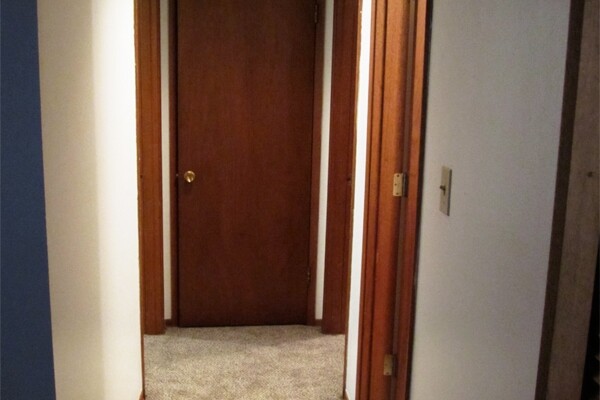 Portland Day 12: My Baby’s Growing Up 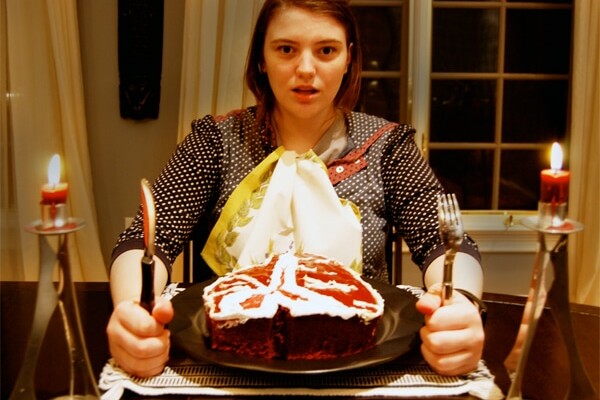 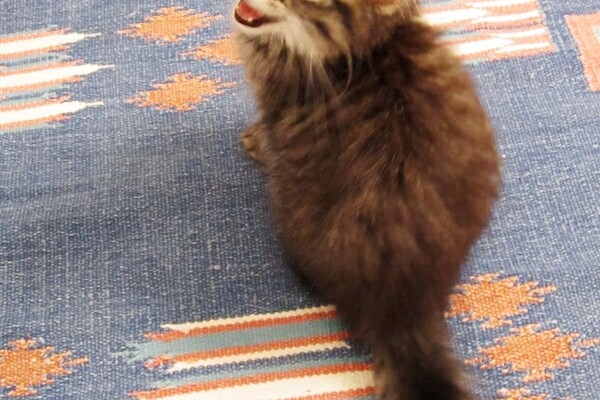