Remember that stuff I said about tons of things getting done around the apartment while I was on break from school and work? Which has been for the last two weeks?

That hasn’t really happened yet.

BUT I CAN EXPLAIN. 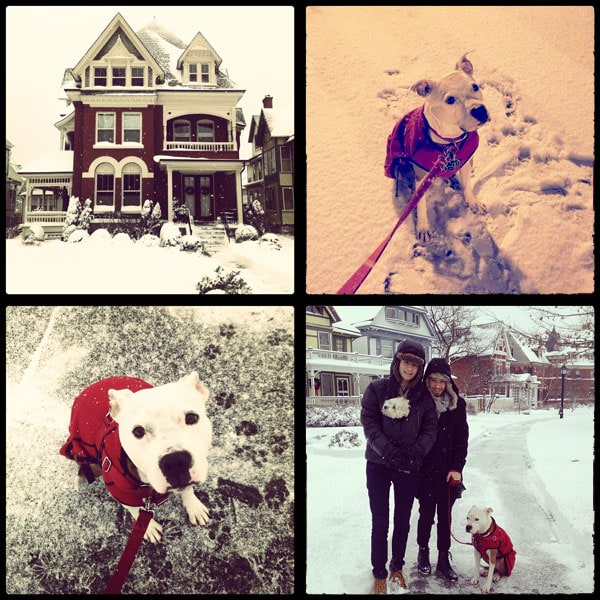 Max and I took our caravan of dogs to Buffalo for Christmas, but a four day trip turned into a 6 day trip when we got snowed in! I guess it snowed a bit down in NYC, too, but hot holy damn, Buffalo. You know how to do a snowstorm up right.

Buffalo is really beautiful, by the way. I’ll admit that it took me a few trips to warm up to the city itself, but now I really enjoy going up there to visit. Max’s family is super great, too.

The dogs were not as pleased as we were about the snow, but one thing that made them a little more content were their fancy jackets! After Linus got his adorable little mug on Cute Overload, a really sweet company called D-fa Dogs in New Zealand e-mailed me out of the blue, asked if the dogs needed coats for winter, and offered to send them matching Ice Barkers.* So nice! I took them up on it and the dogs have both been getting a lot of wear out of them all winter. The merino wool is deceptively warm, and if it’s really cold we’ll layer their American Apparel hoodies underneath for extra cuteness points.

*Note: D-fa Dogs didn’t pay me to post about them or even ask for a post in exchange for the jackets. They just wanted my dogs to be warm!

Linus has the black coat, by the way. He’s impossible to take pictures of because he doesn’t sit still unless he’s sleeping, and his paws got too cold to walk so he hitched a ride inside Max’s coat…but I’ll try to get a picture soon. Dogs in jackets are really cute and you deserve to see that FYI. 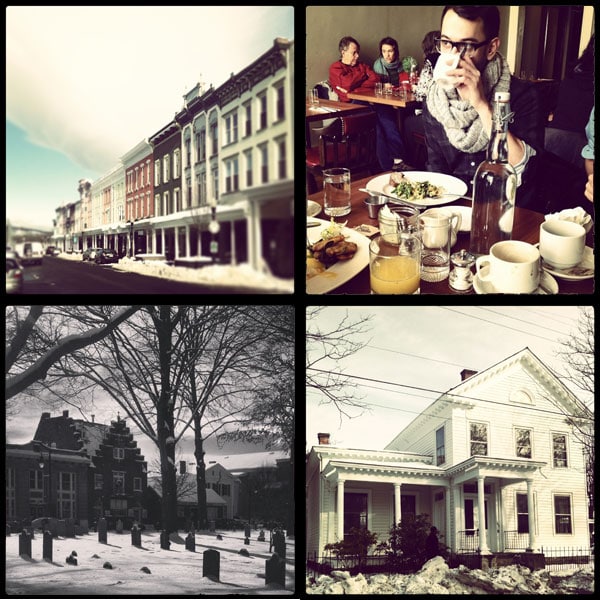 After we got back from Buffalo, we made a quick turnaround in Brooklyn before heading up to Kingston, NY for a couple of days. A couple of our friends got together and rented a cute house, so we spent two days drinking and eating and drinking and antiquing and drinking, and the whole thing was super fun and relaxing and awesome. Kingston is cute town on the Hudson River Valley, and now I have delusions and yearnings in my loins to find a way to buy a cheap historic house somewhere in that vicinity and make it beautiful and perfect. For the weekends and holidays? It would be so fancy and beautiful? Hashtag goals.

Since nobody seemed to know what they wanted to do while we were up there, I just did what I do best and dragged everyone out thrifting for a few hungover hours of fun times digging through weird old crap. Totally everyone’s idea of a good time by which I mean nobody’s by which I mean my friends probably hate me now and I’m alone and destitute and could really use some new friends? 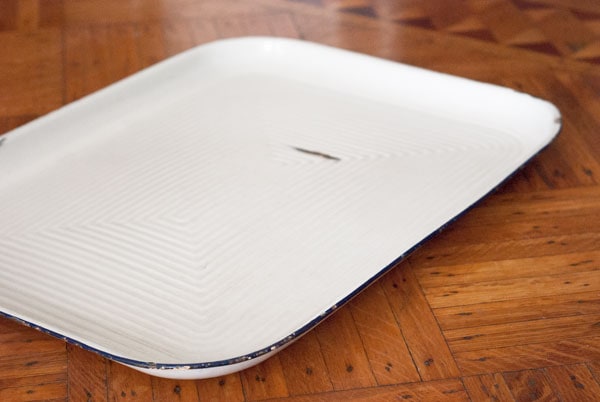 Whatever. I bought this ENORMOUS enamel tray, which was covered in dirt and rust but totally looks way better now that I cleaned it up. What do I even do with this thing? It’s about 20×30 inches and looks completely dumb on my credenza or dresser. But it’s pretty and I love it and I love trays and it’ll work out. 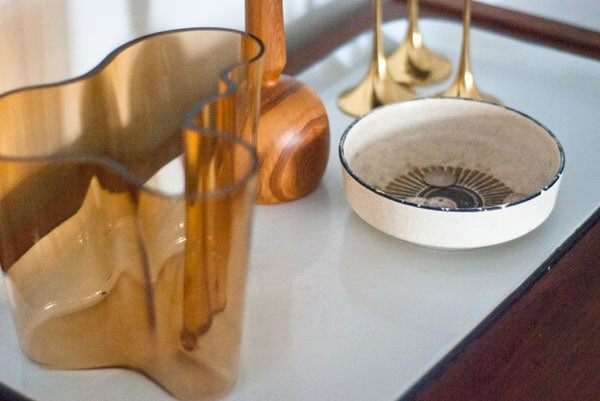 Oh look, I bought another enamel tray, too! This one is a more reasonable size and cute and good for corralling all the things?

Trays are good because you can group your shit on them and then it looks like maybe you have a reasonable amount of shit instead of too much. They don’t call this a design blog for nothing?

Oh yeah I actually bought two of those trays because they were there and they were cheap and I love all the enamel. 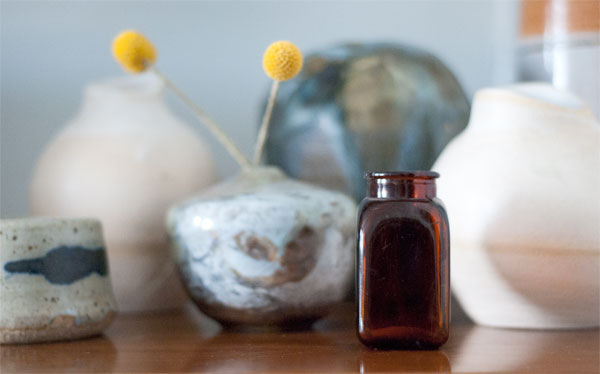 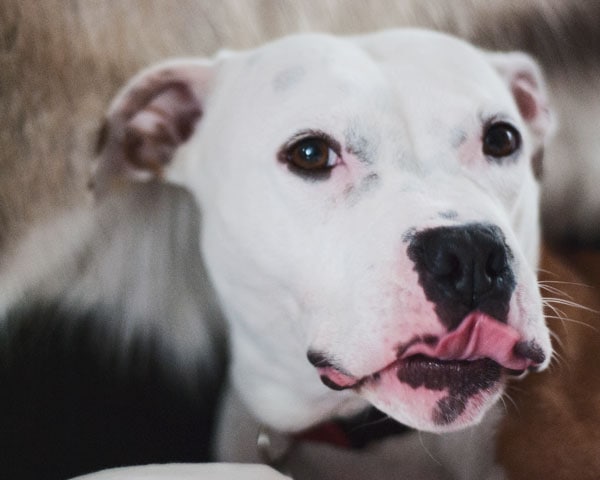 Here’s Mekko to take you through the weekend until we get some real updates happening up in here next week.

Look at her tongue. Look at her nose. Look deep into her eyes. Keep looking. See your future. 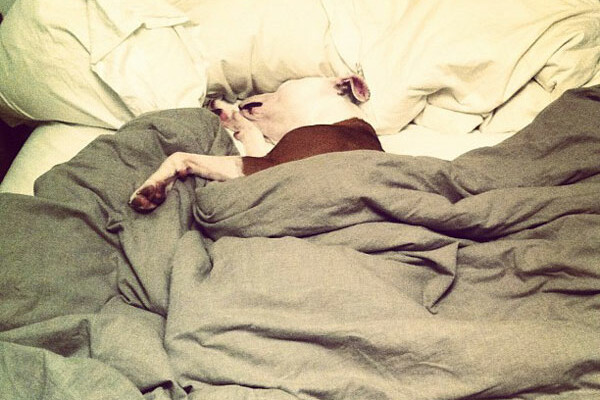 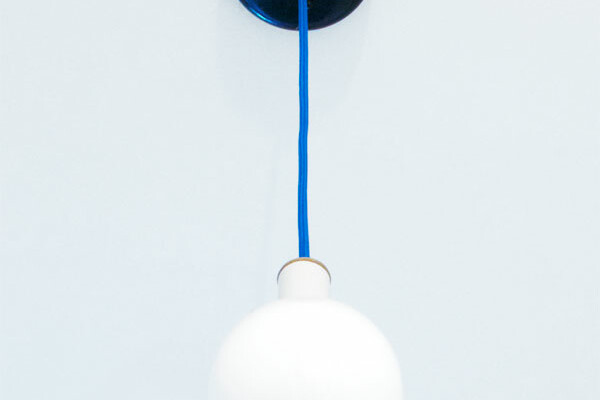