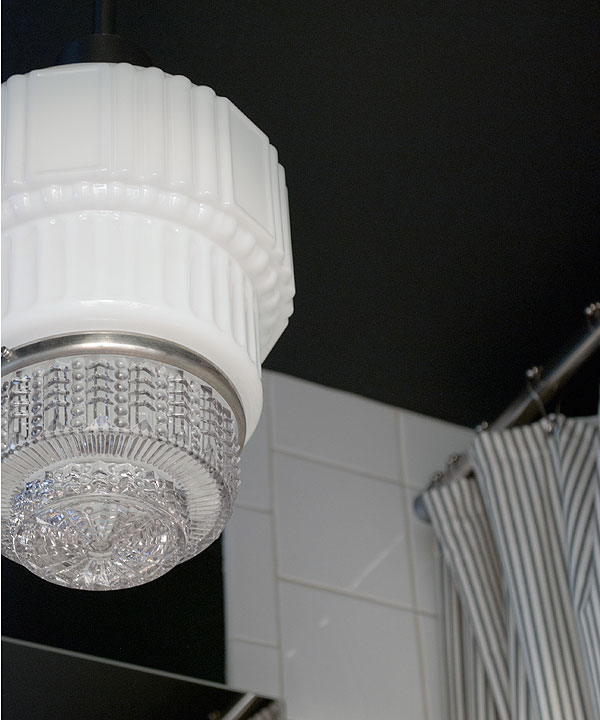 So remember back in November when we did a super quick, super intense, super kick-ass makeover of Max’s childhood bedroom? And we bought that rad 1920s light fixture that totally made the room?

Yeah. Well. I might have omitted some important info that I have now chosen this moment to reveal.

That light was actually one of a PAIR. They were only being sold as a set, but at $150 for both, it wasn’t exactly a huge investment to just go for it even if we only really wanted one.  Surely we could figure out a place to put another gorgeous light fixture, right?

I’ve been down this road before. A few times. Hence this post, where I explain all the times I’ve charmingly rationalizationed and ended up with an absurd lighting hoard that I’m slowly trying to whittle down by just hanging lights all over the place. This strategy is working moderately well, so I’m sticking with it. 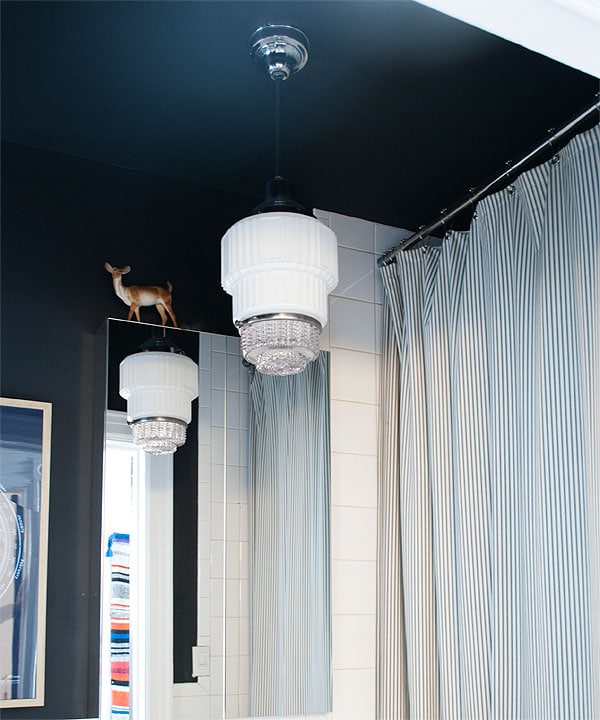 But I decided without even that much waffling (look at me! making decisions with ease!) that this light would be awesome in the bathroom, and it totally is. It works for a lot of the same reasons it worked in Max’s bedroom. The small size of the room matches well with the scale of the fixture, making a small-ish light look like a big, substantial, amazing light. Additionally, super dark walls make the white glass pop like BLAM. Chrome-y bits be shiny like WOAH. These are all technical design terms that are helpful to know FYI. 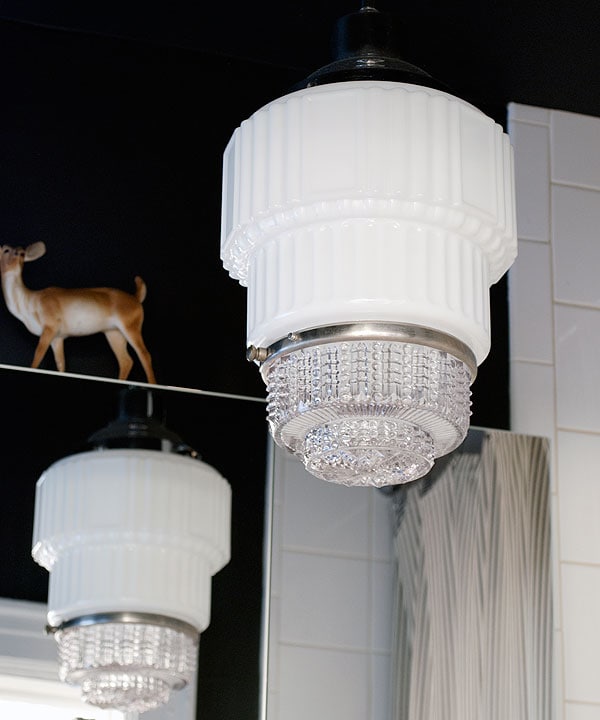 The best thing about the light in the bathroom is that our medicine cabinet is so tall that the light fixture reflects off the mirror and almost gives the illusion that we have TWO great lights. That is, if you’re easily confused by mirrors or otherwise just kind of dumb. Luckily, I am both of these things. 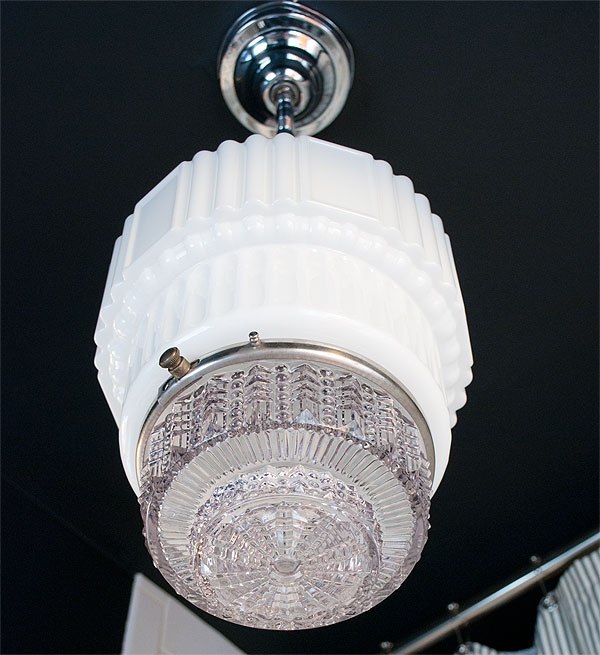 Just check out that glass situation on the bottom! I kind of get lost in how pretty it is sometimes. I know that this art deco style isn’t really in line with the style of the rest of my apartment, but that doesn’t bother me. I always think bathrooms are perfect places to let loose a little bit and make choices that are a little different from the rest of your home. It’s nice to walk into a tiny bathroom and be pleasantly surprised by an element of the space, and I think that’s totally what this fixture does. The DIY’d fixture that was there before was totally cute and fine, but it just wasn’t very interesting or exciting.

Before hanging this fixture, I took the whole thing apart and washed all of the pieces individually in the sink. For the metal bits, I used Barkeeper’s Friend, which made the chrome look absolutely incredible and shiny and new. For the glass, I just used regular dish soap and water, and it was really worth it. Nothing looked that dirty to begin with, but it’s always amazing how a little cleaning can take something to the next level of amazing. I experience the same general revelation whenever I decide to take a shower.

I’ll shut up about the light fixture. It’s beautiful, I’m very happy with it, and I have a very weak spot for art deco and I maybe need more deco pieces in my life. 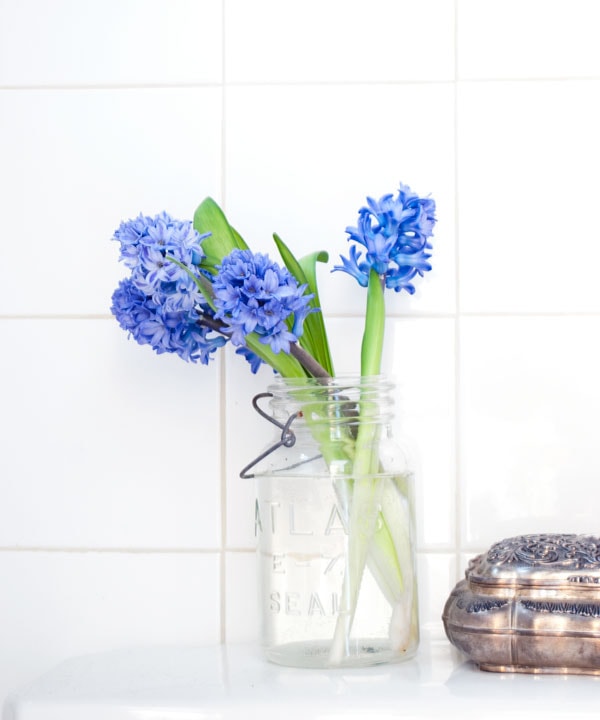 Max bought some flowers for the bathroom because on Sunday they aired a Beyonce concert on TV and we had a bunch of people over to watch it. So weird because the concert was super short and then this football game broke out and I totally lost interest. At least we had flowers? 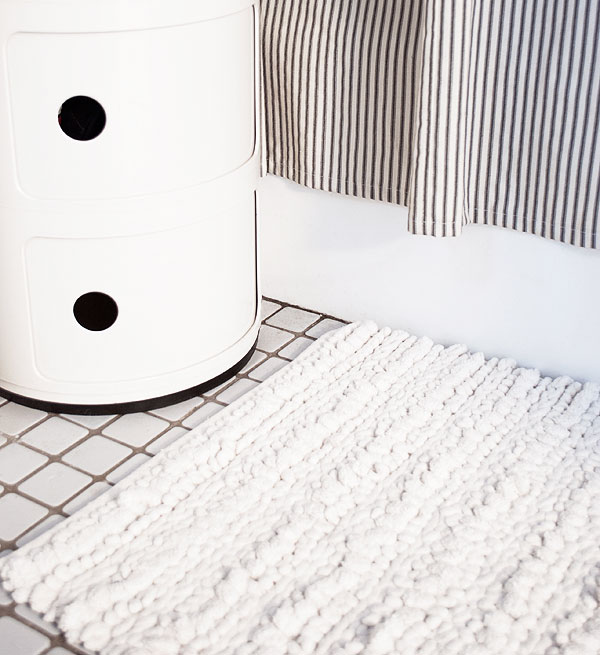 In case you follow the central dramas of my relationship as closely as I do, I figure it’s pertinent to note that I HAVE WON THE BATHMAT DEBATE. After about a year with no bathmat, we went several months with this wooden bathmat before it got moldy and smelly and weird and put in the garbage. Max has, historically, hated bathmats and found them to be gross and in poor taste, whereas I associate having no bathmat with, like, lazy douchebag bros who can’t enjoy the finer things in life, such as smelling OK or clothing made of natural fibers or not stepping out of a shower directly onto cold tile.

This war raged for so very long and was so hard-fought and just when I thought I had no life left in me and I would be forced to accept a bathmat-less existence, Max came around. Angels sang. It was all very dramatic and theatrical, as you can imagine.

Ultimately, my victory was hard-won, and I absolutely deserve all the joy that this plush, sufficient-looking bathmat from Target can offer. It really feels great underfoot and it’s nice to finally feel like a civilized human again after this relationship has turned me into such a goddamned monster.

Turns out it’s very washable and dries nicely in the dryer, too. I know this because Linus took the liberty of testing out its wee-wee pad potential right after I took the photos. I always thought Linus was on my side here (more plush surfaces = more places to nap), but I guess the proof is in the piss, as it were.

ps—you can find my last Design*Sponge post here, if you’re interested: Cleaning Vintage Enamelware
pps—oh, shit, it’s Homies time again. you can vote for me if you want, I won’t stop you or try to get in the way or anything. 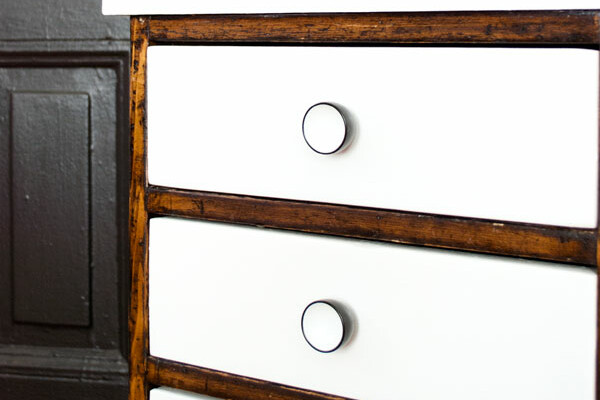