So, due to having zero time and zero energy and no exterior electrical outlet and the house feeling like a construction zone and 3/4 of our family being Jewish (in fact, I am counting the dogs), we did not do anything in the way of Christmas decorations this year, outside or inside. Instead, we did the early-stages-of-renovation alternate version where we change up our seasonal lighting scheme by having some electrical work done.

How’s THAT for holiday cheer?  So festive, even if the neighborhood may not realize/notice it. It’s subtle. 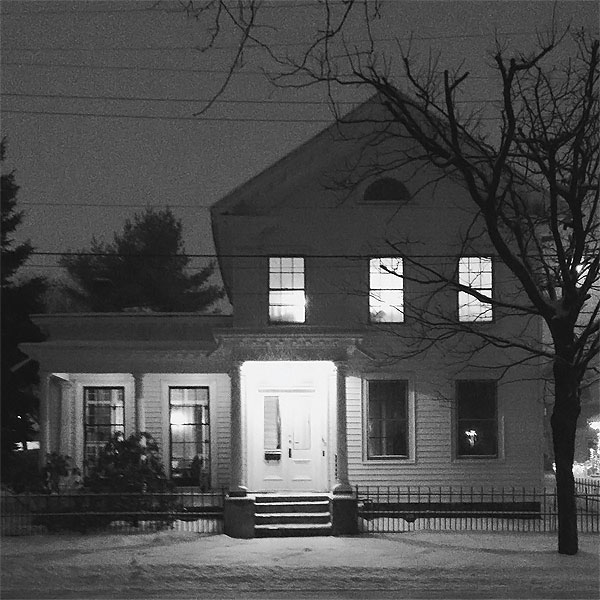 That photo was taken on Saturday night, when we were getting a ludicrous amount of snow in Kingston! Snowy Kingston is so super pretty, and even though we’ve done almost no exterior work (well, half a roof counts I guess, but you can’t see it from this angle…), the house looks beautiful. The house was covered in snow the first time we ever saw it last December (almost a year ago!), and it feels really good to see it this time around looking more and more like a place where people live and a place that people love.

ANYWAY, the point of this photo is the new exterior lights! Look how bright it is! 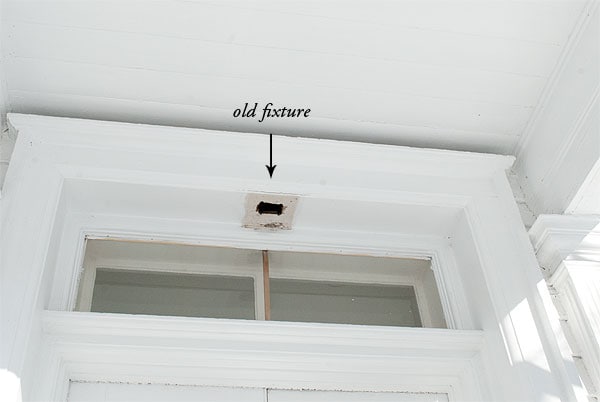 Obviously this is a picture of the hole left behind by the old light fixture and not the fixture itself, but I guess at some point in the 70s or 80s, the previous owner had one of these beauties installed here. It was the only exterior light, meaning that the house was pretty under-lit, generally. Aside from being a crappy size and style for the house, the placement of the fixture sort of didn’t make sense and marred an otherwise (potentially) very beautiful entryway. 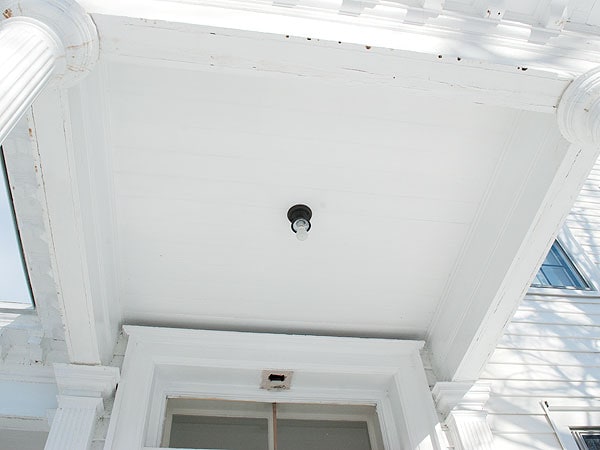 Yay, new light! Obviously I have to patch up and paint that old hole (ASAP, before creatures colonize it…), and obviously this “fixture” is only temporary until fickle me can find one I really want, but having it centered over the overhang makes everything a million times better. The impetus for doing this right now was that I had to coordinate the electricians to come on the same day as the roofers so that they could run the new electrical from above, while the roof was torn off. Otherwise, they might have had to cut holes in the original tongue-and-groove ceiling, which was not going to fly. Both the roofer and the electrician were skeptical of this Extreme-Contractor-Coordination Plan, but it totally worked because I’m a bossy genius.

This fixture was slightly more presentable when it had a shade, but unfortunately it fell off roughly 5 seconds after I secured it and climbed down from the ladder. Dumb cheap lighting. 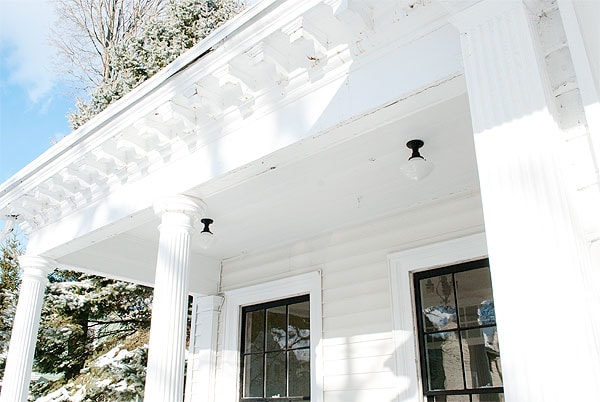 There’s lighting over the porch now! For the first time ever! So exciting!

When it’s dark out, this new lighting goes a loooonggg, long way toward making the house look taken care of, which is really exciting and really important in a neighborhood where that often isn’t the case. I’m also excited for when it gets warmer again and we can chill on the porch under our new lights. These lights are on a dimmer switch, so they’re perfect for lighting up the house or just providing a little ambiance when we’re hanging out on the porch. And who doesn’t love ambiance? Can’t get enough of that ambiance.

The fixtures that are there are just these guys from Lowes (which actually aren’t so bad, especially for the price, if you need something generic that looks historic and whatnot) but I think they’re a bit under-scaled, which bothers me. The original plan was to put a hanging pendant in front of the door and two flush-mount or semi-flushmount fixtures over the porch, but after living with the temporary lighting for a while, I actually think I want to nix the pendant and just have three matching flush/semi-flush-mount fixtures. Greek Revival houses were built to resemble Greek temples, and I think adding a hanging fixture would kind of disrupt the architecture. All the columns and the cornice and the trim details (of which there should only be more when we remove the vinyl siding…) are dramatic enough, so I think all the exterior lighting really has to do is highlight all that stuff.

By the way, given the amount of protection the cornice/fascia provide, the electrician assured me that it wasn’t really necessary to get exterior-grade lighting for here (as long as it’s flush-mount), which is exciting. I still might, just in case, but exterior lighting in general is tough. Like super hard to find anything that isn’t so ugly. Looking at interior options that would look good outside really opens up the options in a huge way.

BUT THAT’S NOT ALL. Stuff happened inside, too! 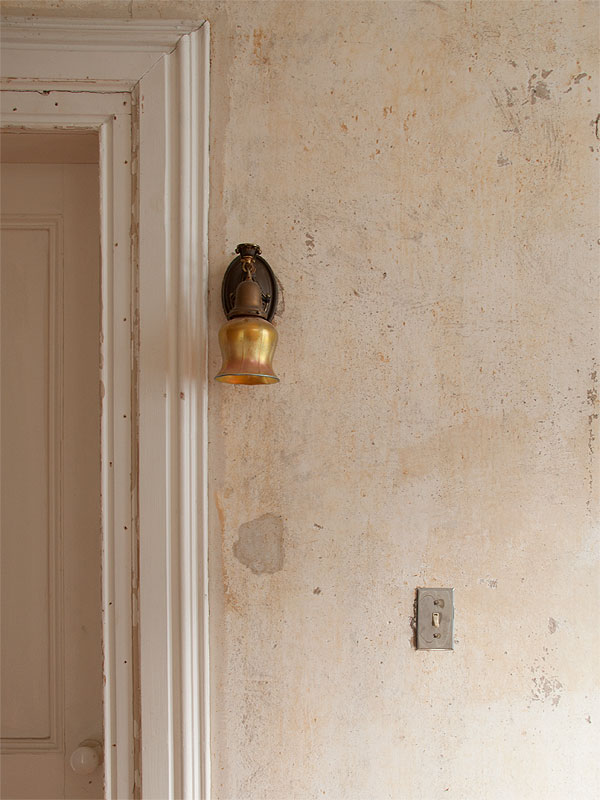 Remember this, in the entryway? Well. It was the only light source in the entire downstairs hallway. The hallway is over 30 feet long and kind of narrow, and having one teensy sconce trying to light up the whole thing was just not going to cut it.

I went back and forth a lot on whether or not to keep the sconce, and in the end decided to get rid of it. I know! First of all, it was connected to some pretty old wiring (lots of our wiring is pretty old and there isn’t really anything wrong with it, but it still feels good to replace it whenever it makes sense…), but I also felt like the space wouldn’t really be lacking anything without it. It isn’t original to the house (though it may be original to the house having electricity), its placement was sort of arbitrary, it wasn’t effective…blah blah blah. I still have it in case we want to use it elsewhere! 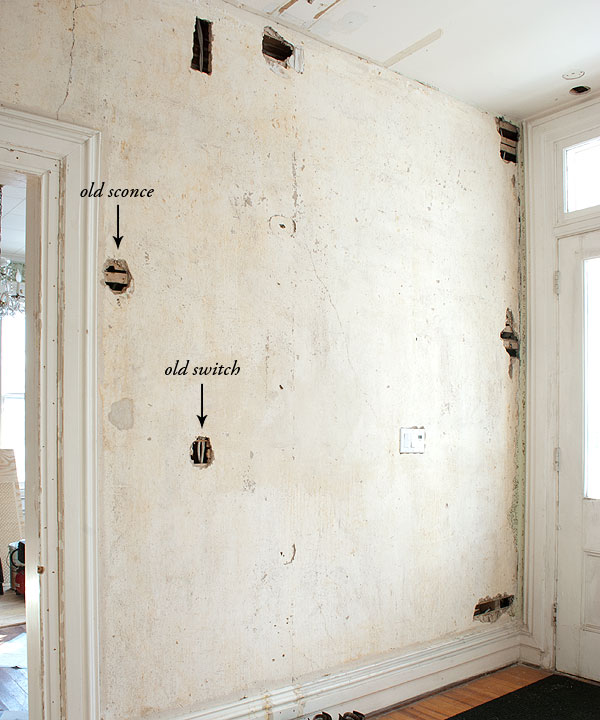 Part of the reason I haven’t really made any headway in the hallway is because I wanted to wait for this electrical work to be done, and I’m glad I did! Look at all those holes! Now I can finally start to patch up and repair the walls, which will be so exciting. It’s going to be a longgg process, but getting this entryway/hallway situation checked off the list is going to be a huge accomplishment. 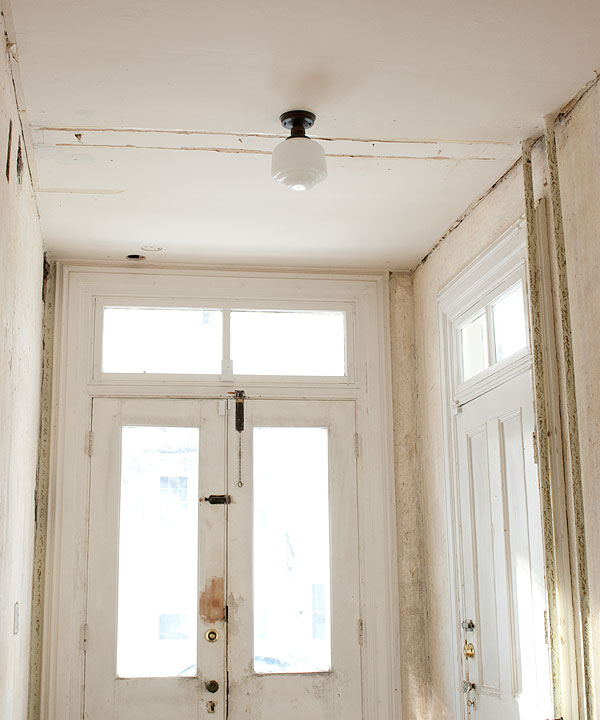 Yes, this light fixture is also completely terrible, but the fact that it’s THERE and that it WORKS is all I really care about at this moment. It’s centered in the entryway between the front door and the base of the steps. The ceilings are almost 10 feet here, so it definitely needs a big amazing chandelier. It’s going to be soooo good. 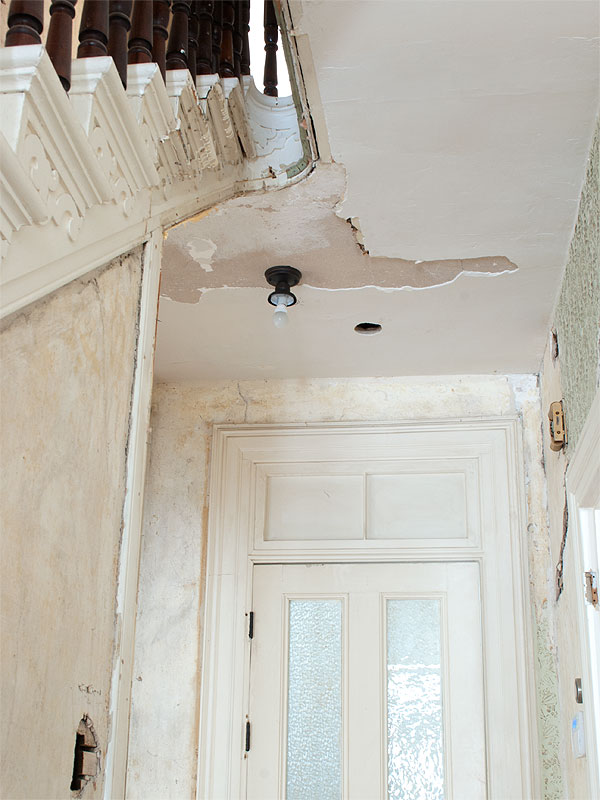 In the back of the hallway (man, these pictures just get scarier and scarier…), we added another light that’s on the same circuit as the one in the front of the hallway. The shade for this one also fell off and shattered into a million pieces (I promise I’m not an idiot; these light fixtures are just really poorly made…), but for now it’s not like it’s even the worst-looking thing in this photo. So.

I think for here, I’ll probably do something pretty small and flush-mount, so as not to compete with the big guy down at the other end of the hallway. Just something that does the job… 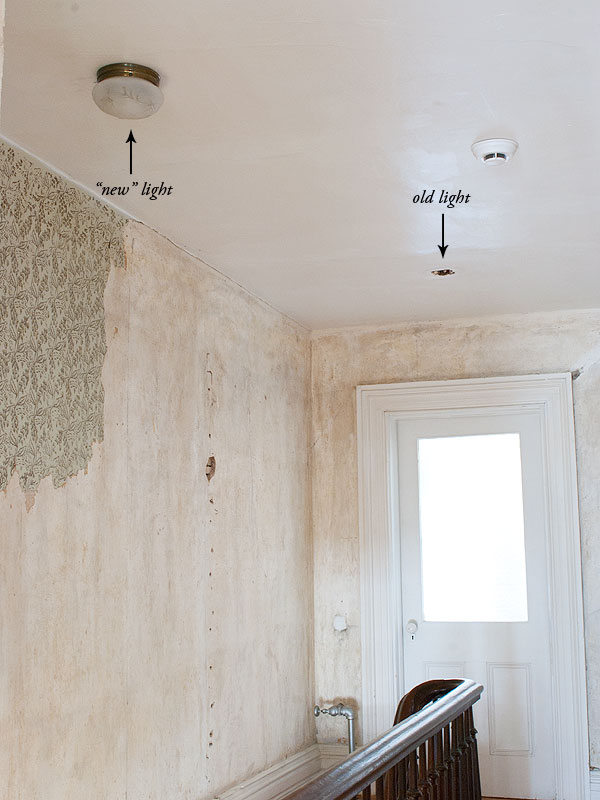 Then UPSTAIRS, I asked the electricians to move the existing light. It was basically centered over the area at the top of the stairs (in front of the bathroom door), which was annoying for two reasons:

1. The ceilings upstairs are only 8 feet, so putting a chandelier or pendant there would have been tough/impossible.

2. This is the only light source in the upstairs hallway, which meant that the other end of the hallway was super dark. 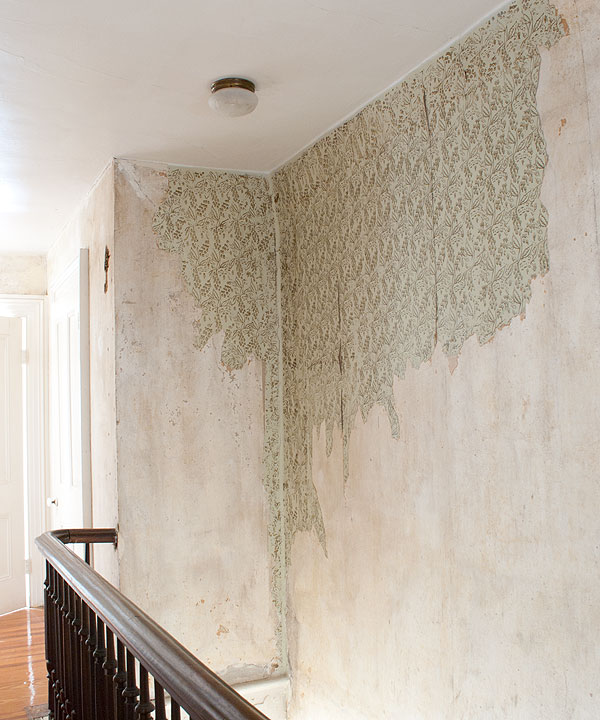 Moving the fixture over the stairs solves both of these problems! Now that it’s more central, it lights up the entire space a bit better, and since it’s over the stairs, we have plenty of head-room to hang something way more exciting than that little crappy thing with grapevines etched into it.  I just kind of eye-balled the placement, and if I could do it all over again I might move it 6″-1′ back toward the bathroom, but it’s done now so I’m choosing to think it’s perfect! 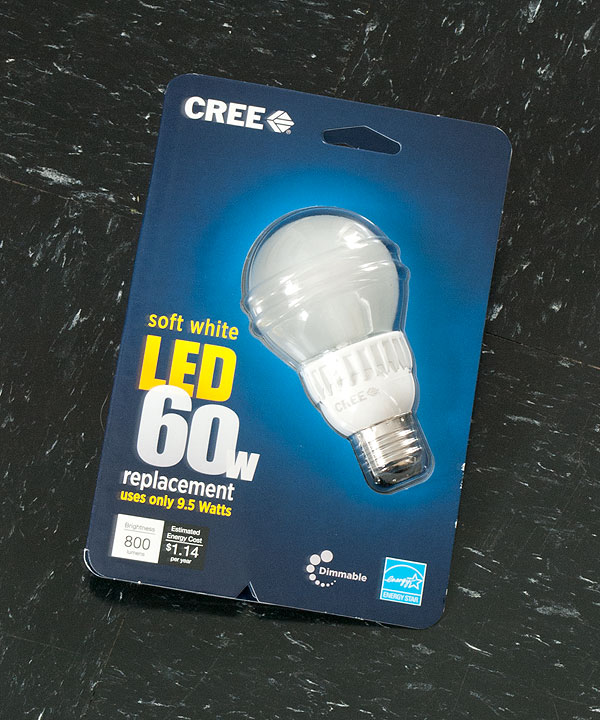 Before I end this long, rambling post about things that probably only I could get excited about, I wanted to mention my new(ish)found favorite lightbulb: the Cree bulb. This is a big deal in my life.

1. Very energy-efficient. It doesn’t even get warm when it’s left on for hours and hours, which is my scientific way of knowing it’s good for the world.

2. Not terrible to look at, like acceptable to put in a regular lamp or anything where it’s still mostly covered. But SO much better looking than a CFL.

4. Lasts forever. Package says it will last 20 years. That just seems ridiculous, but I guess we’ll find out.

5. MOST IMPORTANTLY: it gives off nice light! Like actually! OK, it’s still a teensy, tiny bit different than a good ol’ incandescent, but I’m the pickiest person alive and I have zero problem with the kind of light this bulb gives off. I basically can’t stand ANY kind of CLF, halogen, or other types of LED’s, so this is huge. Just make sure you get the SOFT WHITE, not the daylight.

We’ve been using these bulbs wherever we can and they’re really great. At about $12 a pop at Home Depot they aren’t exactly inexpensive, but the idea is that the energy savings over time (and, in theory, not having to buy any new bulbs for a couple decades…) helps them pay for themselves. That math is too complicated for me, but I WILL say that it feels good to FINALLY have found something that’s better for the environment and doesn’t make me want to gouge my eyes out with an icepick. 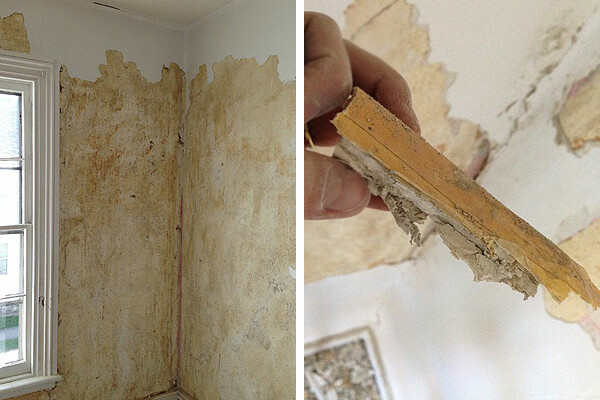 Prepping the Walls in the Upstairs Office! 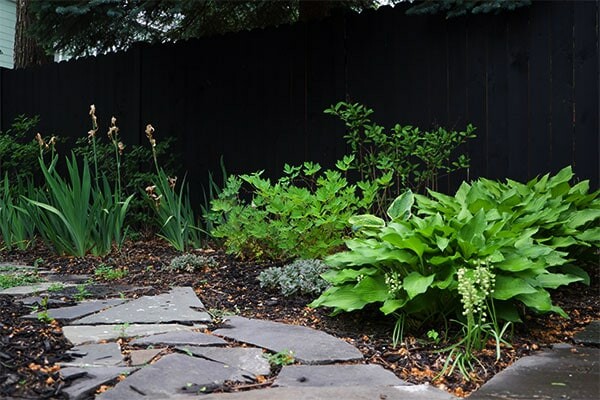 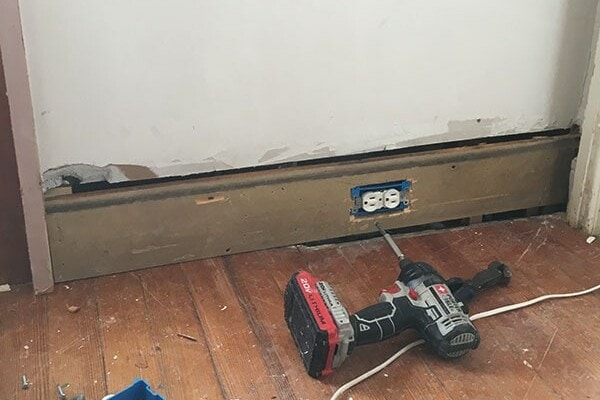