OK, FIRST THING IS FIRST, PEOPLE: thank you so, so, so, (so) much, a gazillion times over, for all of the incredibly kind, excited, and extremely supportive comments, emails, tweets, instagram comments—all of it—over the past couple of days. I know I’ve said this before, but I really can’t express how grateful I feel to have such a wonderful bunch of people reading my blog. You guys make this such a pleasure, and I don’t take for granted for a second how lucky I am. Hugs for everybody!

SO, now that we’ve gotten that mushy stuff out of the way (sorry! I have feelings), let’s get to know this new house a little better! I loved reading all of the name suggestions for this new house—because we’ve gotta call it something—ranging from “Anne of Green Gables” to “Ramona” to “Brian” to “Gay Chalet” to “The Treehouse” to lots of “Cottage” variations, and after thinking long* and hard** I think we’re going to call it”¦Bluestone Cottage! The Cottage, for short. Kingston is sort of known for its widespread use of locally-quarried bluestone, and what I love about this house is its cozy, cottage-y vibe in the middle of all these big houses around it, so there it is.

*not all that long.

**not all that hard, either.

I shared a couple of exterior shots in the last post, but I figured it warranted its own post before we dive inside (which, if you think the outside looks rough”¦you’re in for a time!). Partly because I like the dramatic build-up, and partly because I didn’t get my act together and draw up floor plans, and partly because the exterior is where we’re starting!

With a project of this scope, it’s sort of hard to figure out where to even start, but a couple of factors went into this decision. First, this house desperately needs a paint job, and there’s a limited amount of time before it gets to too cold to paint and get some plants in the ground. Second, first impressions are important, and if I’m going to sell this place, the longer it at least looks good, the more interest I’m hoping I can generate from early on. Third, because this house has looked terrible (or, uh, not even much like a house at all from the street!) for so long, it’s important to me to at least get the exterior cleaned up and looking fresh ASAP. It’s important to the neighborhood, and it’s important for the house. Vacant/condemned/falling apart houses become targets for all sorts of bad stuff, and fixing up the outside will go a long way. I’m so excited to make this cute house cute again. 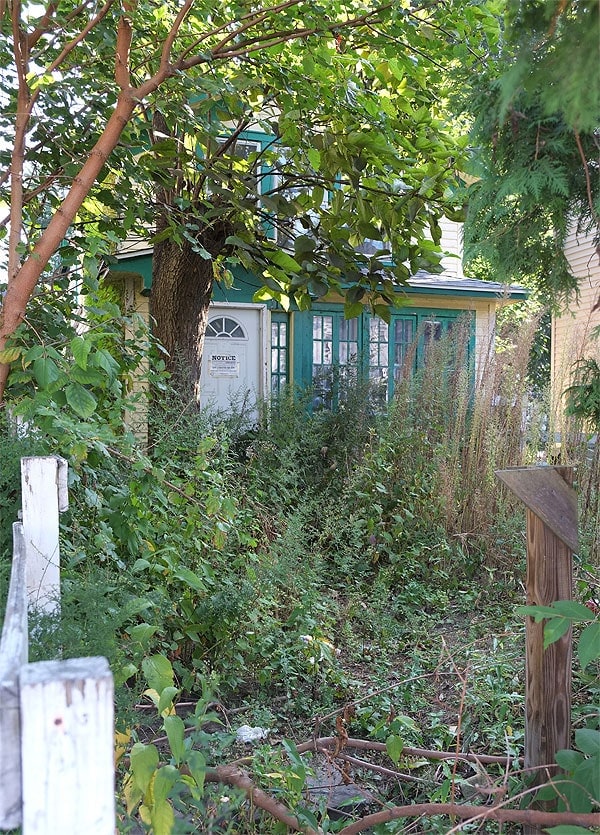 So here we are, standing on the sidewalk right outside. One more step down the street and the house would be completely obscured by the enormous overgrown shrubs, and one more step back and it would be blocked by the house next door. I told you, hidden! This picture doesn’t really reflect how much trash there was in the yard, but it was”¦a lot. I spent Day 1 working on clearing a lot of the yard, and I filled 3 contractor bags with garbage. This is part of what I’m talking about—I don’t want people treating this property like a public dump anymore! Hopefully a cleaned-up exterior will help out with that. 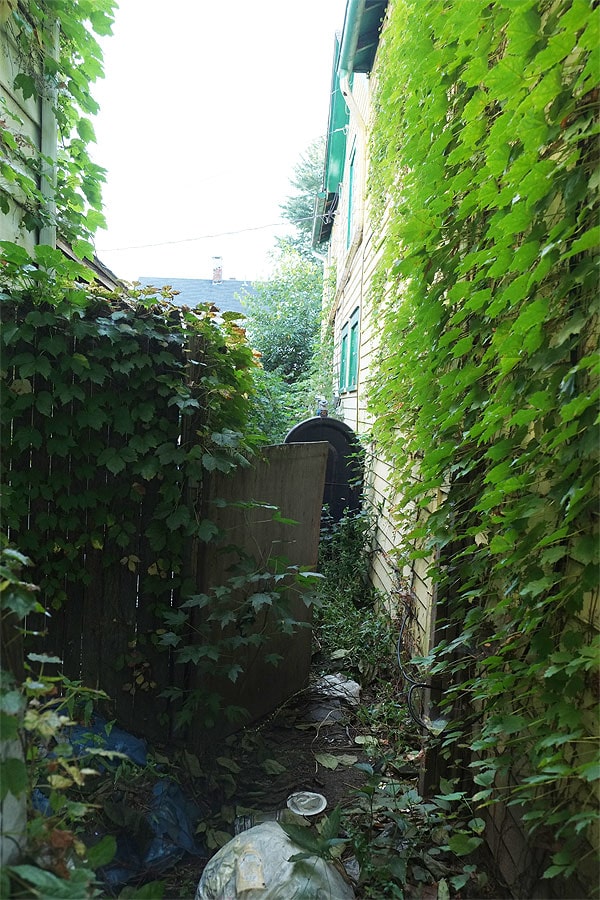 The side of the house (and the back) is similarly insane. The lot is only 23 feet wide, which leaves about 3 feet on one side and about a foot and a half on the other side. I’m not sure what this vine is (not poison ivy, thankfully!), but it’s really taken over this whole side of the house. The clapboard survived the overtake just fine, which is good. Anyway, the gate is just a piece of rotted plywood attached to some rotted 2×4 lumber, and theoretically would have latched to a bunch of scrap wood nailed directly to the clapboard on the house. Getting the gate open and getting to the backyard for the first time was”¦really intense. It’s literally like walking through a jungle.

The huge oil tank on the side is actually only a few years old, but its days are numbered. First of all, it totally blocks the pathway to the back of the house, and obviously it’s ugly. Additionally, the majority of the copper pipes in this house are missing, so now is a pretty good time to switch to a more efficient, cleaner, and cheaper heating set-up. Plumbing and HVAC is where I expect the majority of this renovation budget to go and I’ve quoted all the work, so hopefully there aren’t any huge surprises there.

This reminds me! I have to call the plumber today to try to set up a pressure-test for the gas line. The gas service has been disabled for over two years, so this is required by the utility company (luckily, they were OK with switching on the electric so we could operate tools and stuff, which is equal parts miraculous and a little scary”¦I make sure to switch off the main breaker at the end of every work day, but still). There’s no point in turning on the gas service right now anyway, but now would be a good time to know if a bunch of the yard is going to need to be dug up to run a new line. Let’s all hope that does not need to happen! Luckily Central Hudson, the utility company, has a program in place that would make running the line essentially free. So it wouldn’t be a big deal financially, but I don’t want to destroy new landscaping if we end up having to do that! Thinking ahead and stuff. 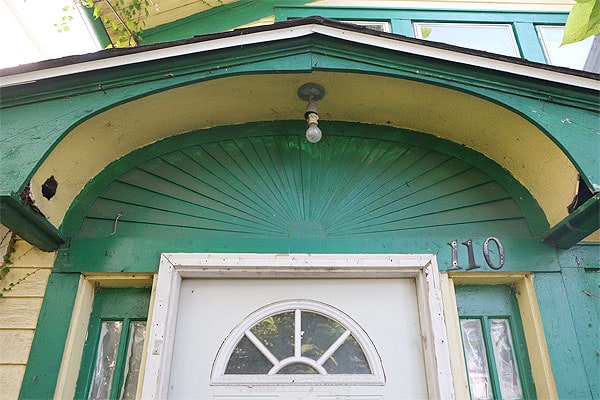 ANYWAY, let’s talk about what’s good here! I love the sunburst detail over the door, and the sweet entrance in general. The sidelights need a lot of repair but are salvageable. Obviously that arched part above has been eaten away/rotted, so the plan is to replace it with new beadboard. The front door and jamb is really damaged, and the door is pretty ugly to begin with, so it’s all getting replaced. Oh, and there’s a lot of missing crown molding around the top of the roof line of this little overhang, so there are definitely critters getting into the roof here. The crown molding is nothing very special (I found an exact match at Lowe’s!) so the plan is to remove it, add a proper fascia, and then put up the new crown and paint everything. 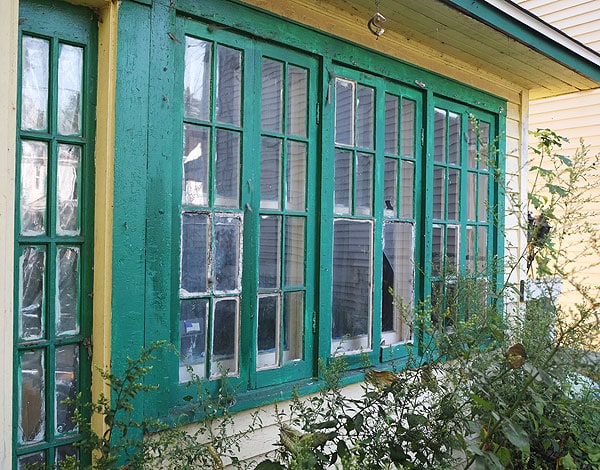 I’m a sucker for old windows, as we know, and one of my very favorite features of this house are the old casement windows! The house has both double-hung sash windows (similar to my house, so the top and bottom sashes can both move up and down and are counterweighted by big lead weights inside the wall), and these charming casement windows (like the window above the sink in my kitchen), which open outwards. Can you imagine this house in the summer with the windows thrown open and the breeze coming in? ADORABLE. They need a TON of repair work”¦there’s a lot of rot and broken panes all over the place, but I have a lot of hope that they can all be salvaged. Those middle two panels are going to be a special little challenge because the mullions are missing on the bottom! I’ll figure it out. 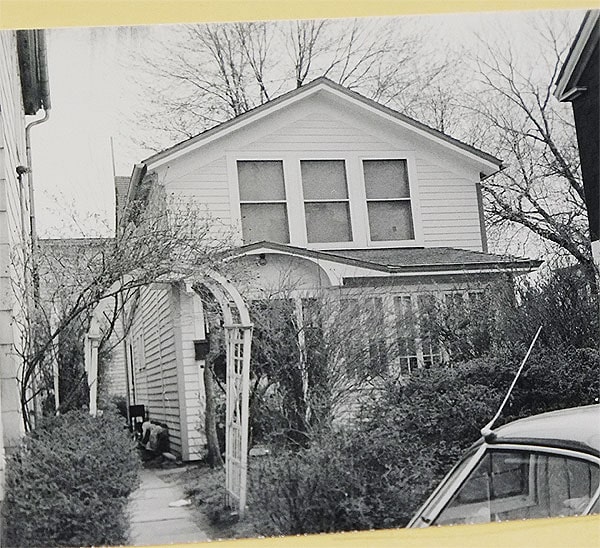 Remember when I got a picture of our own house from the city assessment records? Well, the quality of the photocopy my friend gave me wasn’t so great, so I marched my butt down the to the assessor’s office to see it in person. This was a day or two after I found out that this house was for sale and was already obsessed with fixing it, so I asked if we could pull the file for the cottage as well! Total aside: all the city workers I’ve met throughout this ordeal have been such a pleasure. The Department of Public Works, the Tax Assessor’s office, the Code Enforcement Officer, The Building Safety Division”¦all super nice and helpful people. I think they all think I’m half insane for doing this, but they all want the best for Kingston and our neighborhood. It’s so nice to feel like they’re on my side with this.

Anyway! This photo was taken in 1950 (so, like my house, the house was already kind of old at this point, although I’m not sure how old”¦), but look how cute it is! I think the clapboard was a light blue in this photo and the trim and windows were white. I like the contrasting sidelights and door”¦it’s been oddly challenging figuring out how to paint this place, so seeing what somebody did here is nice. Anyway, I’m not really trying to restore it to this appearance, necessarily, but I love seeing the house at a time when somebody clearly cared about and maintained it.

I’ll definitely try to replicate some things from this photo if I can, though. For instance, at some point somebody erected that weird fence around the whole front. I actually have a plan for most of it, but I think I’ll just remove the part that goes from front to back on the left side and try to put back some bushes that can grow into a hedge, like it is in this picture. Way nicer than a fence built a foot from the neighboring house, which has created this void of terror that’s impossible to maintain (and therefore overtaken by trash and vines and general horror). Technically the land the hedge would go on isn’t mine, but I’m going to go ahead and guess the landlord of this building isn’t going to complain if I clean up a little of his property, too.

The little arched trellis is so cute, right? I don’t know if I’ll try to do something similar or not, but it’s totally adorable and charming here. I almost wonder if something more substantial, with kind of a bungalow-modern vibe, should go back here. Hmmmm. Probably not for now, but maybe more toward the end of the project.

So see that  bluestone path leading from the sidewalk to the door? That’s why I put bluestone in the name—all those slabs are still there! They go from the sidewalk all the way to the back of the house, and there are also some big slabs in front of the door. You’d never really expect it, looking at the house the way it is right now, but it’s exciting to have all that material just sitting there, waiting to be seen again. That much bluestone would be SO pricey to put down today, so it’s very cool. At least to me. I am thrilled by odd things, admittedly.

We’ll go inside next, I promise! 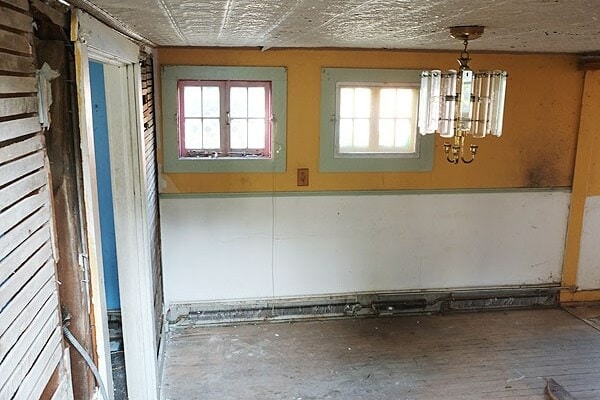 The First Floor of Bluestone Cottage 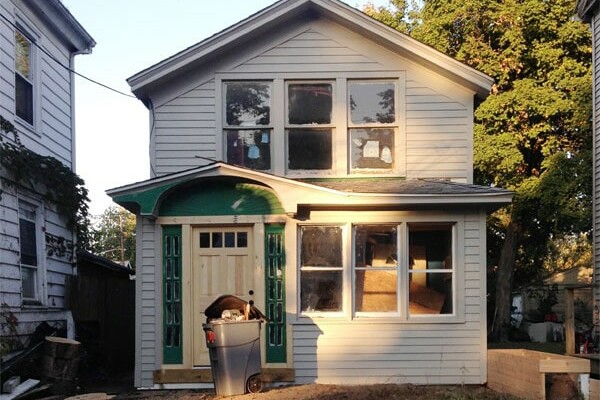 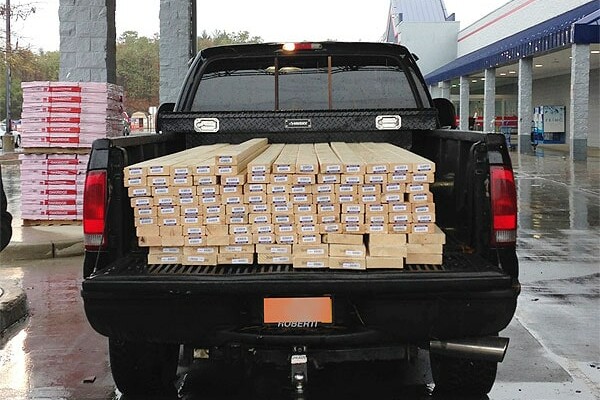