The Second Floor of Bluestone Cottage

Alright, so we’ve seen the exterior of the little condemned cottage-house that could, and we’ve taken a walk through the first floor, so if you’re still here and haven’t abandoned ship for some nice blog you might actually get a decent Pin out of”¦want to go upstairs?

Too bad. You have to. My blog, my rules. 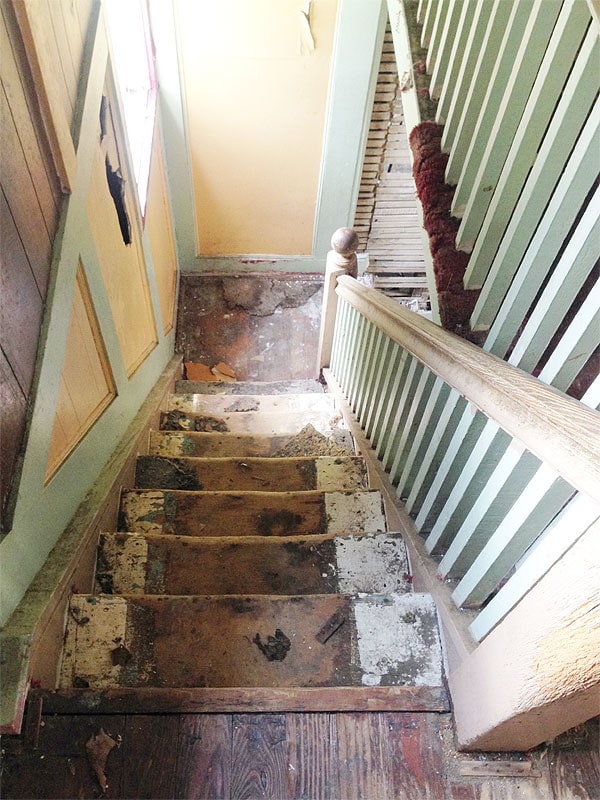 I’ve talked before about how cute I think the staircase is, so here it is from the top! So cute! I love the natural wearing on the pine treads from so many years of use—I think the plan is probably to just sand and seal them, unless the stains are really bad and they need to be stained really dark or painted. Anyway. There’s potential with these stairs! 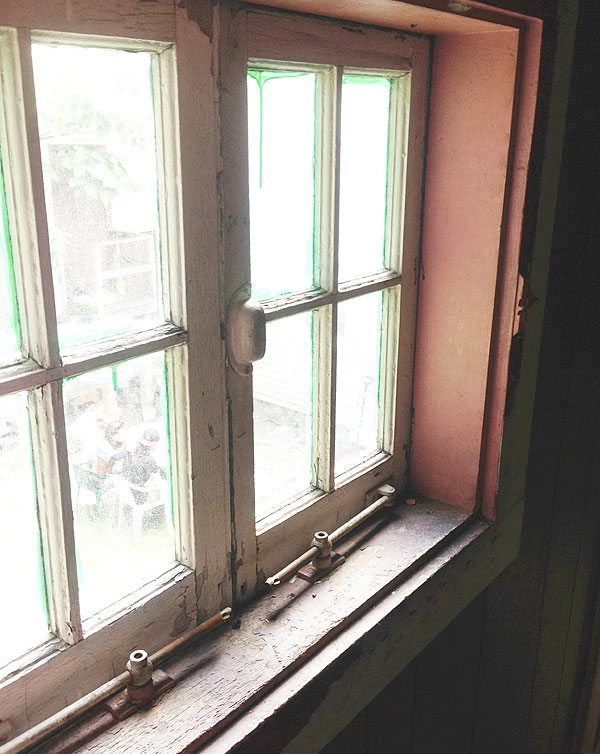 There are two really sweet little casement windows in the stairwell (one at the bottom and one at the top) that I’m really hoping I can repair and put back. Fixing the windows is a pretty slow and labor-intensive process, so I think I’ll just have to do one by one over the course of the project.

Here is where I ask for a little help and guidance in the off chance that there are any very savvy hardware specialists reading: all of the casement windows in the house still have the original hardware that allow them to open and close (the casement stays, those funny things at the bottom) BUT almost all of the stays are missing the little knob that keeps the window in place if it’s opened or closed! The hardware can definitely be stripped down and reused, but not without replacement knobs. Anyone know of a way to buy just the knob, without having to buy an entirely new casement stay? Buying new stays is an option, but at about $35 a pop, I really don’t want to do that! Thoughts? 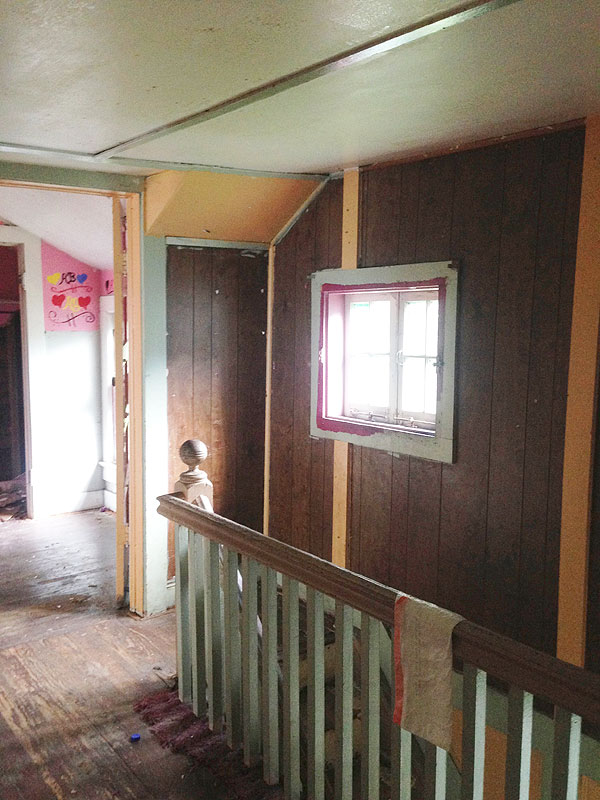 To help you orient yourself a little, the stairs run in about the middle of the house. At the top, there’s sort of a landing zone which is right over the dining room.  Then there’s a bedroom directly over the kitchen and at the other end, a larger bedroom essentially over the front half of the house. Make sense? Alrighty then. 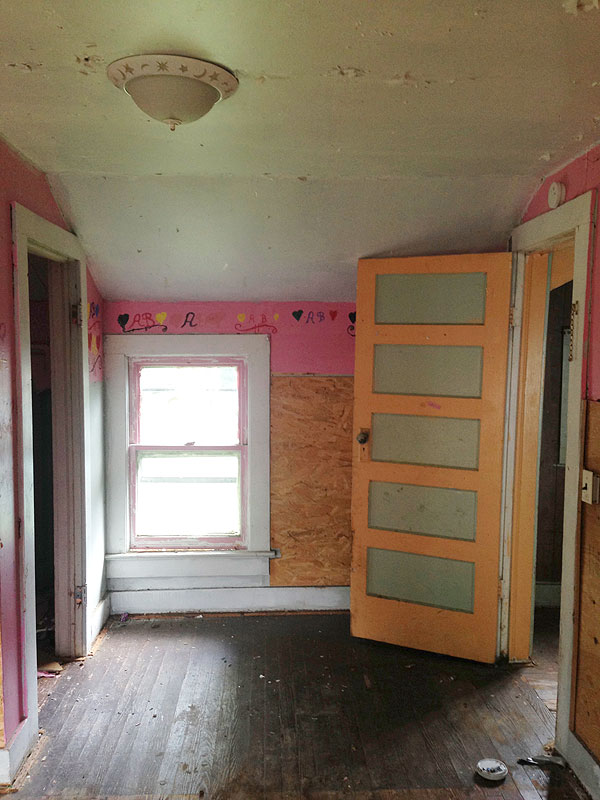 This first bedroom is way cute and a really nice size. I love that five-panel door, too! 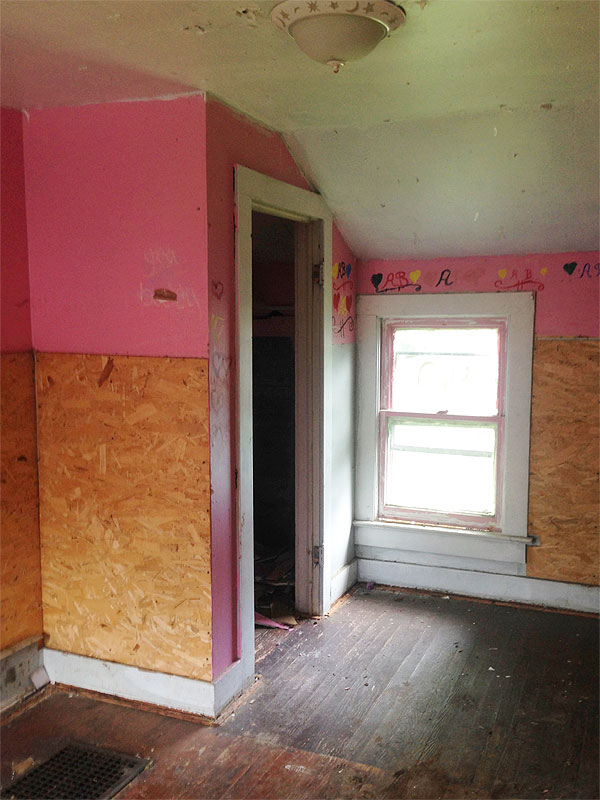 In the corner, there’s this kind of awkwardly-placed closet that maybe I’m dying to tear out. I know that might be a tough sell, but it just feels”¦so recently added and out of place here, right? Unless closets are original (or more seamlessly added), I much prefer the alternative of using freestanding furniture to accomplish the same thing in old houses. 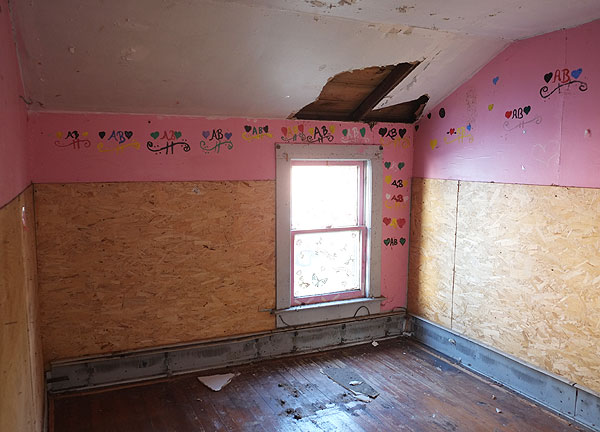 The other side of the room looks like this. The two little double-hung sash windows let tons of light into the room and are in relatively good shape”¦a little restoration and they’ll be just fine. I’m weirdly excited to get my hands on all the windows in this house. Restoring old windows is such satisfying work.

I have no idea why all of the walls in this room are covered with 3/8″ OSB, really. I took it all down already and it was concealing some holes (which didn’t seem to be an issue in, uh, the rest of the house?), but mostly the walls are fine? Who knows. Like the rest of the walls in the house, the drywall is in such bad shape and so poorly done to begin with that it’s SO not worth trying to salvage. Down to the studs! 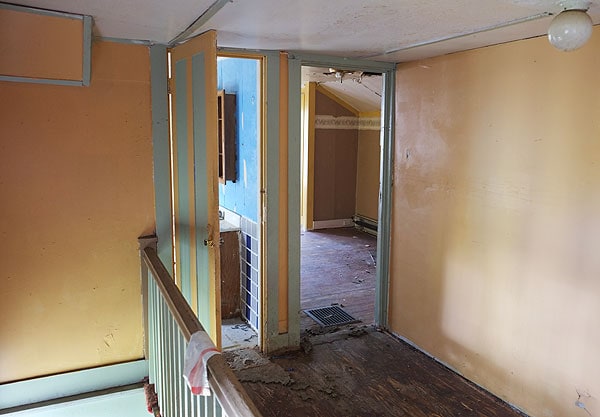 Back at the top of the stairs and outside that bedroom door, there’s a nice little landing kind of space and doors to two rooms: the current full bathroom and the larger bedroom. To the right, there’s this non-original wall that really just needs to come down, but the placement of it actually makes a lot of sense to me. Allow me to explain! 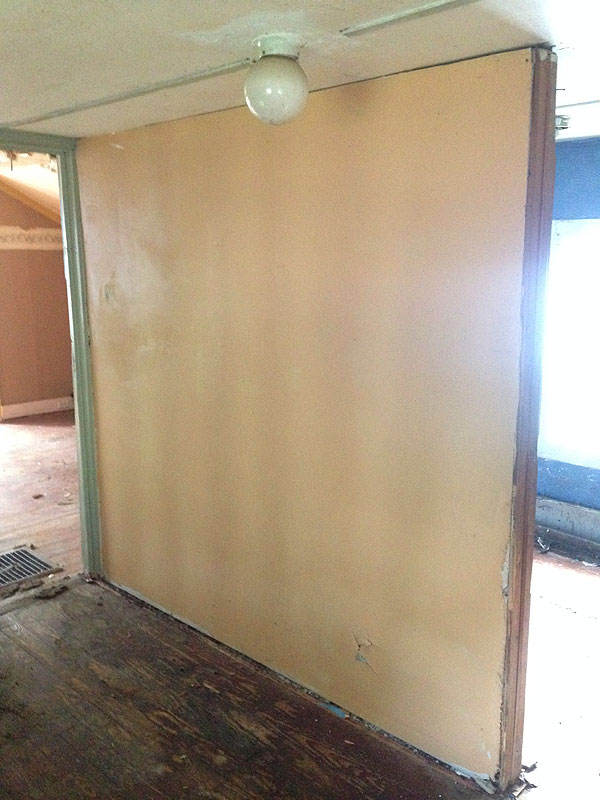 Here’s a better, blurrier view of the wall. It basically bisects this generous landing space and creates what the listing referred to as a third bedroom.

Here’s the chimney, which I still think might be fun to expose for a little texture and character. 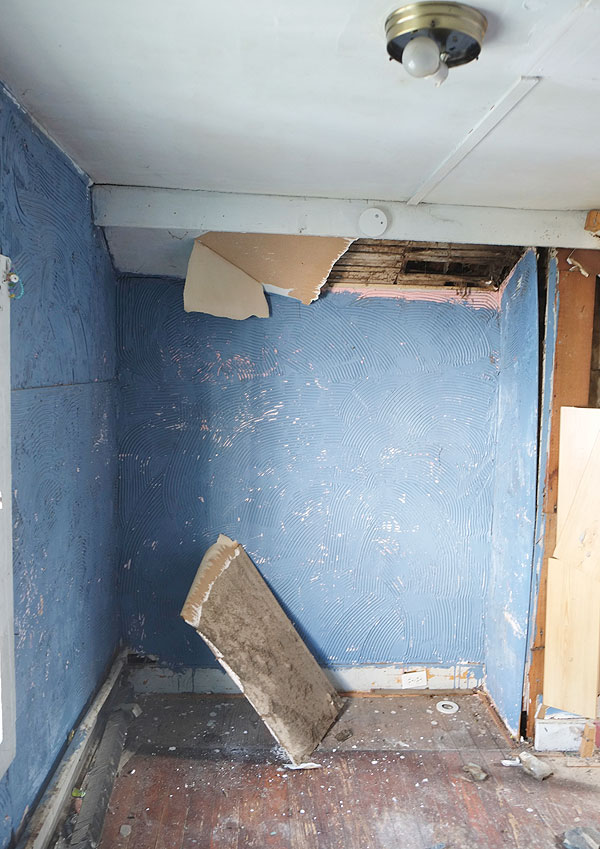 This “third bedroom” is a disaster. I have no idea what’s going on with the walls, but it doesn’t really matter. The room is really only big enough to wedge a twin bed and a side table into so I don’t really feel like it’s worth maintaining as just another room.

You know what it could be, though? 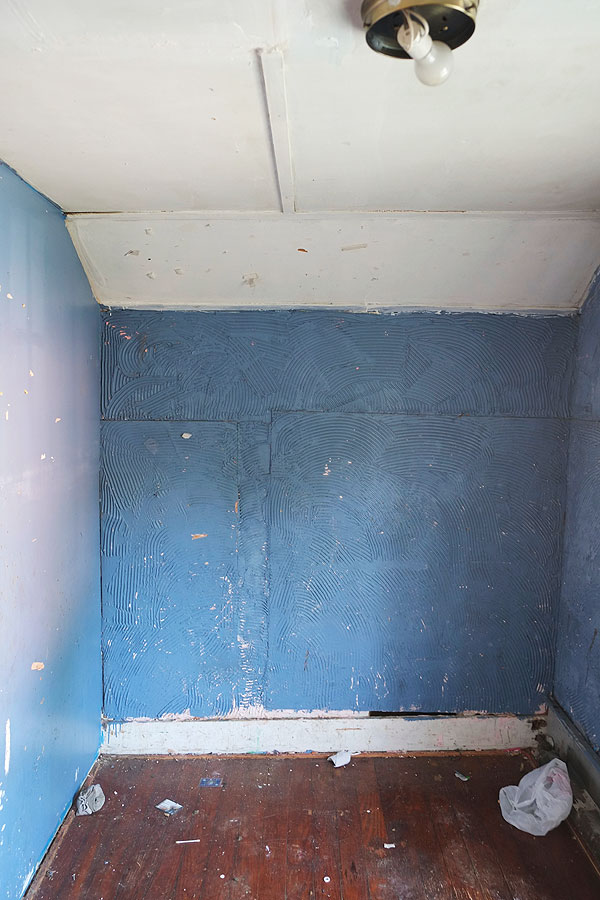 A totally good bathroom. Right? I mean, if we’re doing all new plumbing and electric and stuff anyway, it’s not like it makes a big difference to put the bathroom somewhere else. 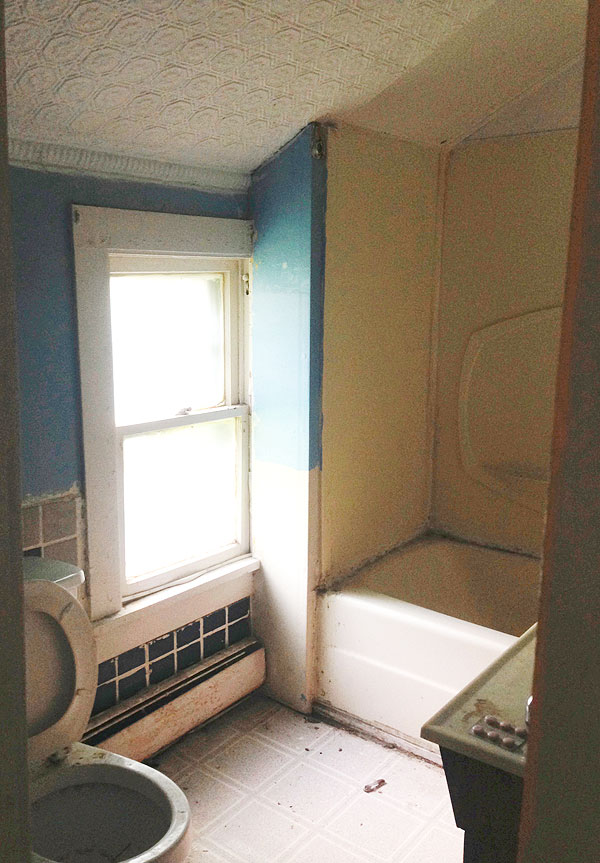 So since that will be a bathroom, I can rip this other bathroom out completely. This bathroom is truly horrifying. I’ll spare more photos (FOR NOW), but there’s really nothing in here worth salvaging at all (the tub is fiberglass, don’t be fooled). This picture makes it look like maybe it just needs a little cleaning, which is funny. There’s literally a dead animal in the vanity. Total hoarder-style flattened mummified thing. I can’t even identify it. It might be a ferret.

The advantage of ripping out this whole bathroom is two-fold:

1. See how that wall at the end of the shower is built out? Well, there’s another little window behind that! It took me a while to notice since you can only see if from the outside of the house, but it’s there and intact and it’ll be nice to uncover it from this mess.

2. Also, this bathroom really cuts into what would otherwise be a very large, lux bedroom! 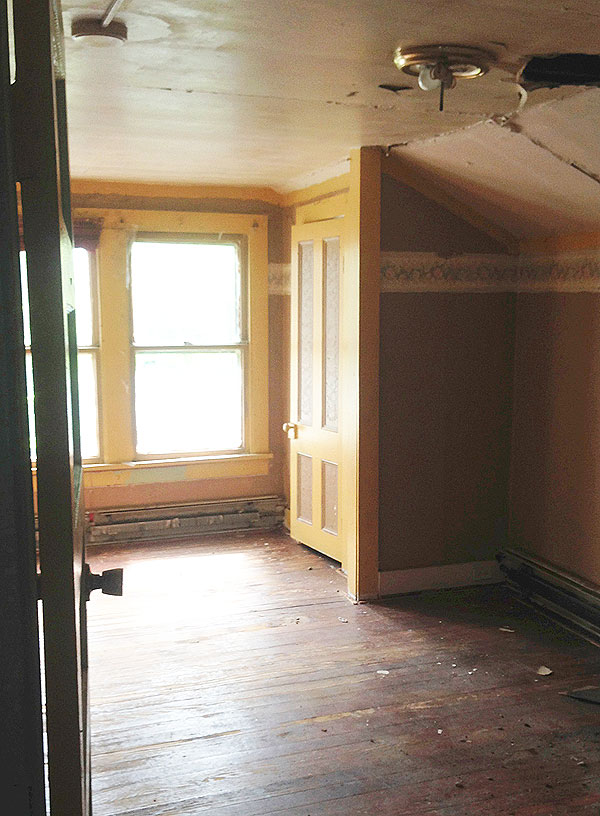 Check it! This bedroom could be SO nice and fancy-feeling, right? 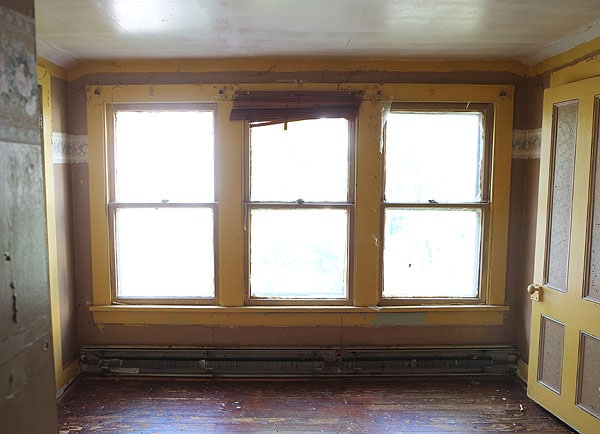 I love this bank of windows in the front, which faces the front yard and the street and lets in a ton of light. On either side of the windows are these closets, which I think are a nice use of space here. 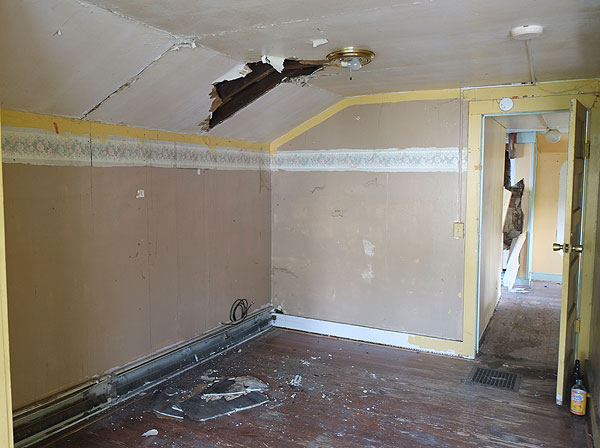 I suppose this is probably the wall you would put the bed on, which is nice and long and stuff.

This is the backside of the bathroom—remember, the whole thing is going! Instead of one little window in a weird little nook, this wall will have three nice windows letting in even more light and looking really charming and lovely. It’s going to be such a nice room.

So, I know the upstairs maybe doesn’t look like much, but I might be even more excited about it than the main floor! Want to know why? I’ll tell you why.

Much like the main floor, the ceilings up here are only about 7.5 feet high. The difference is”¦there’s no attic in this house.

Ohhhh yeahhhh. Let’s vault them! Let’s vault all of the ceilings! This upstairs is going to be SO GOOD. Bright and light and architecturally kind of interesting”¦I’m really excited for it. I’ll be working together with a contractor to figure out the best way to do it without compromising the structure of the roof, but it shouldn’t be too bad. It’s sort of a similar to my plan for the old upstairs kitchen in my house, so maybe I’ll even learn a thing or two doing it here first! I love the idea of doing sort of a paneling (or faux-paneling) treatment on the walls and ceiling and then painting it all out bright white. I see it. I see it in my brain. It’s awesome.

So, about that window hardware…