I was one of those kids who was really interested in the private lives of my teachers. In third grade, I still had trouble reading words over about 5 letters long, but I knew where my teacher was from (Louisiana), her daughter’s name and age (Alexa, age 14), where she lived (a townhouse not far from us), the breed, age, and weight of her dog (Beagle, Rocket, approx. 40 pounds—he was a sausage), his diet to help him slim down (mixing canned green beans into his dog food), among plenty of other stuff. All of the arbitrary details that my instructors would just sort of offhandedly mention somehow got filed into this creepy subconscious Catalogue of Important Facts in my young brain, which evidently didn’t leave a lot of room for stuff like multiplication and division. Those things took way longer for me to pick up.

I’m still basically like this. I often forget what some of our close friends even do for a living, but I remember exactly where they’re from, where they went to school, when, how, and where they met their longterm boyfriend (whose occupation I similarly cannot recall), the name of their childhood family dog. It’s a mild issue in my life.

In college, I had this amazing writing professor. I loved him. Everything on the syllabus was so good and stuff I’d never read before, and his critique was always spot on, and he was just the best. He was a Serious Writer—published many times over, awarded, that type of thing—and the other students seemed to split between about 10% total reverence and 90% complete fear. It was a seminar-style class so really that 10% represents 1 person. Maybe 2. But anyway. He was great.

Why was he great? Well, I can’t totally remember by most typical metrics. Writing. Awards. I told you more or less what I know already. But one thing I do know is that he lived in Red Hook in Brooklyn, which is where IKEA is. And one time after class I casually asked if he ever went to IKEA for lunch, or just to hang out, because I’d probably do that if I lived within walking distance. And that’s when it started.

“Oh my god, have you seen the new PS collection? So much good stuff.”

“I really need a new sofa, but I can’t decide between the KARLSTAD and the KIVIK.”

“The only thing I miss about my old apartment is my PAX wardrobe. That thing was magic.”

It turned into a weekly thing. 3 hour seminar, followed by hour-long conversation outside about the merits of various IKEA products and our general, genuine love for the place. We were kindred IKEA spirits, and it was beautiful. This one time, another student tried to join in and make the case that IKEA was not all we were cracking it up to be, and things did not end well for that student. Because here’s the thing: whether you like the IKEA shopping experience or assembling the products or the products themselves at all, these things don’t negate that IKEA, I think, is the only company that has actually fulfilled the promise of modern design. Mass produced, affordable, well-designed products for regular people. That’s pretty exceptional. In the world of IKEA, nearly anybody is entitled to live with good design. I don’t really think of myself as having a lot of fondness for multi-billion dollar corporations, but clearly I have a soft spot.

A few weeks ago, something happened: IKEA approached Max and me about putting together a little Thanksgiving story. Since obviously it would have to run before actual Thanksgiving, I have been referring to it as Fakesgiving. They wanted Max to do the photography and post about it on Design*Sponge (where he’s senior editor now—go Max!), but I guess they wanted me to be in a picture or two and help style and then tweet about it. At first I was like…”wait, I’m not even supposed to write my own post? But I have so much to say!” But then I was like…”screw it, I’m going to write a post anyway.” So we decided on kind of a simple, modest Scandinavia-meets-Hudson-Valley vibe, got to go pick up a few IKEA products I’ve had my eye on, cook a bunch of food, and set up Fakesgiving in our dining room at 2 in the afternoon. It was a good practice run for when we do it for real. Then we invited a couple of friends over that night, stuck everything back in the oven for a bit, and pretended it was all for them.

So there. The Thanksgiving story is posted over on Design*Sponge, featuring a couple of recipes I made and some nice pictures of our dining room all gussied up. Instead of rehashing that post here, I woke up this morning thinking it might be fun to throw together a few of my current favorite IKEA products—some new, some old standbys. Just, you know, because. For the love of it I guess. 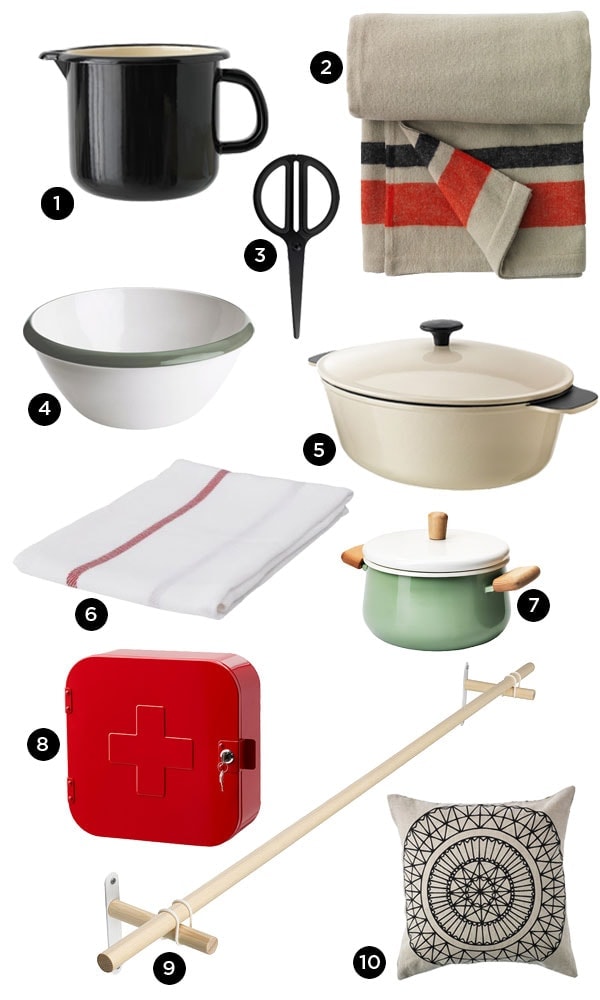 1. RYSSBY 2014 Pitcher: How very adorable is this sweet enameled pitcher thing? It’s got that classic rustic kind of vibe I like for our house because it blends nicely with vintage/antique serving ware and whatnot. I don’t think I’ll ever get over my enamel phase.

2. RYSBBY 2014 Throw: We threw this on top of my DIY bench at Fakesgiving, and it’s so cute! We already have a couple of heavy-duty thick wool blankets around the house, so I actually like that this one is on the thinner side—easier to throw over the arm of a couch or a chair and just a nice, cozy throw. So classic and sweet.

3. FULLFÃ–LJA Scissors: I haven’t seen these in person, but that’s a cute set of scissors! I love IKEA for useful, pretty, simple items like this. Their stainless steel and wood spoons are almost all we have in our kitchen for cooking utensils, and the quality is excellent.

4. UTBUD Serving Bowl: For some reason I can’t seem to find this on the website, but this bowl is really nice! It’s very sizable—perfect for serving big salads and stuff like that. We have a lot of vintage/antique stoneware bowls I’ve collected here and there (Max has actually put a moratorium on bowl-buying…lame), but I generally only really use them for dry foods like breads and nuts and stuff. This one mixes in seamlessly with the collection, but without possibly hazardous lead in the glazing and wear from years of use. It’s delightfully heavy.

5. SENIOR Casserole + Lid: When I bought this pot about a year ago, I actually considered writing a whole post about it because it’s just that nice. The outside is enameled cast iron and the inside is cast iron, and the whole thing is appropriately thick and weighty. I’ve grown to really like cooking on cast iron—it retains and distributes heat so well, and a well-seasoned pot/pan is fairly non-stick by nature. This one leaves nothing to be desired, honestly—it’s the highest quality piece of cookware I own, and it’s good-looking. I don’t own the smaller casserole or the pan, but I always really want to buy them if only just to round out the set in case they get discontinued.

6. TEKLA Dish Towel: I love the simplicity of the TEKLA dish towel. I use them for tons of stuff, but I like for mine to go through a very specific cycle: when they’re new, they make really pretty, casual-fancy napkins (especially in the DIY copper napkin rings I made for Fakesgiving!). Once they get a couple stains that don’t come out in the wash, they turn into dish towels. Once those start to wear out or get a little ratty looking, they go into the cleaning/shop rag category. Not bad for a 79-cent item!

7. KASTRULL Pot: As soon as these came out (there’s a smaller saucepan, too), I really wanted an excuse to buy one or both. Fakesgiving was my excuse. They’re just very adorable. Since they’re enamel over fairly thin steel, these probably aren’t going to cut it as everyday cookware, but they’re great for things like sauces and soups (and gravy, Fakesgiving style). I learned this the hard way with my Dansk-Kobenstyle pot, which is similar—thinner enamel cookware just doesn’t hold up well to cooking where stuff is liable to get stuck. But anyway. Cute.

8. GUNNERN Lockable Cabinet, Red: I just bought one of these recently, and the quality is GREAT. It actually came all in one piece, too! I like that it locks, because I like secrets.

9. SANNOLIKT Curtain Rod: Woah, hold the phone. I’m really weirdly into this curtain rod, and this is coming from somebody who really struggles (insofar as one can really struggle) with curtains. A big part of my issue with curtains is that finding a good rod is tough. This one I could get down with, though, and I can see it working well in all kinds of spaces. I’ll have to check it out in person next time I’m there, but this picture has me intrigued.

10. RYSSBY 2014 Cushion Cover: I keep my eyes out for fun, graphic throw pillow covers (I feel like it’s surprisingly hard to find good ones) and these are cute! Printing it on the unbleached linen/cotton blend really makes it, I think. The two sides also have different designs, so it’s kind of like two pillows in one! I like a ton of the stuff from the RYSSBY line—the cake stand has this same pattern on it, and we used that to serve pie at Fakesgiving. In other news, I have a cake stand now! FANCY. PANTSY.

Remember to go check out Fakesgiving on Design*Sponge! Is IKEA part of your holiday tablescapes?

But seriously I want to know.

This post is kind-of-sort-of-but-not-really in partnership with IKEA USA? Thanks, Big Blue n’ Yellow! 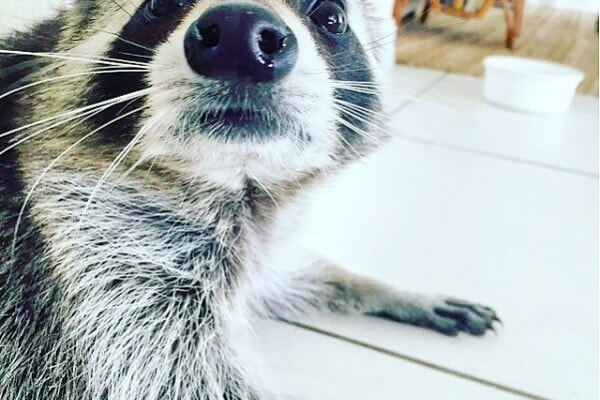 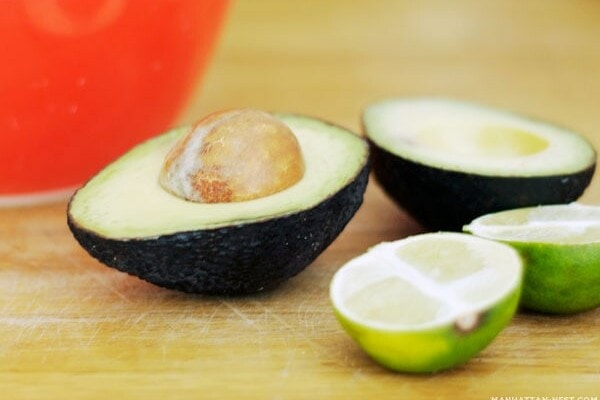 I solved breakfast and this is what it looks like. 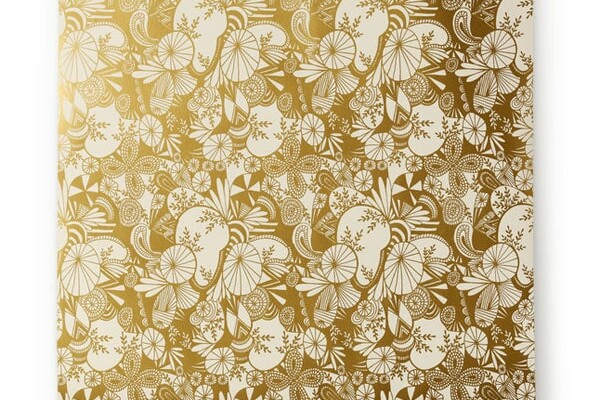