The Bedroom has a Fourth Window! 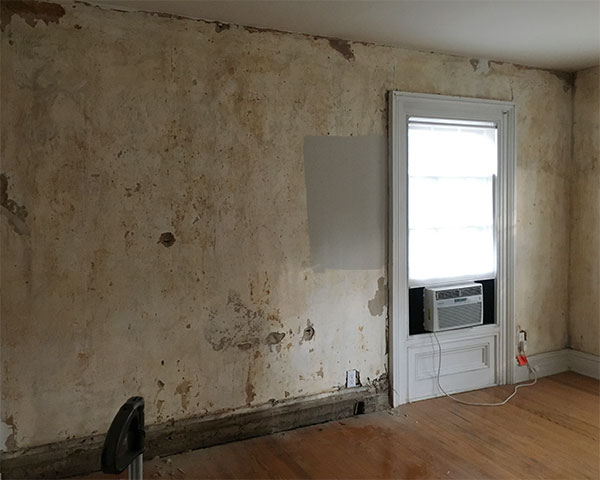 My bedroom has always felt…tricky. It’s a big enough room, but between three doors, three windows, and a radiator, it’s been difficult to land on a layout that feels balanced and comfortable. Two of the four walls are long enough to place a bed, but one option places it sort of uncomfortably snugly between the closet door and the corner, and the other puts it on this wall, above. To center it in the room means it overlaps with the window on the right side, but to throw it off-center still looks unbalanced and…off. Don’t even try to place a bedside table in a way that looks not weird! Forget about it. And this is a full-size bed we’re talking about, mind you, but I have big dreams and aspirations of upgrading to a king because bed is the best place.

I forgot to take any pictures of the room before I moved everything out of it, so just take my word for it. It’s awkward and not in a cute and charming way. My bedroom made me feel inadequate because I couldn’t figure out how to make anything look OK in it. Also probably why I’ve been living with unfinished plaster walls for three years, which look kind of arty in a picture but are really just dusty and derelict in real life.

So anyway, remember how I’m restoring the side of my house? Remember how I’m adding a few windows in the process? Somewhat counter-intuitively, I feel like adding another window to this room already full of windows and doors and other obstructions will actually make the space feel more balanced from both the inside and the outside of the house. 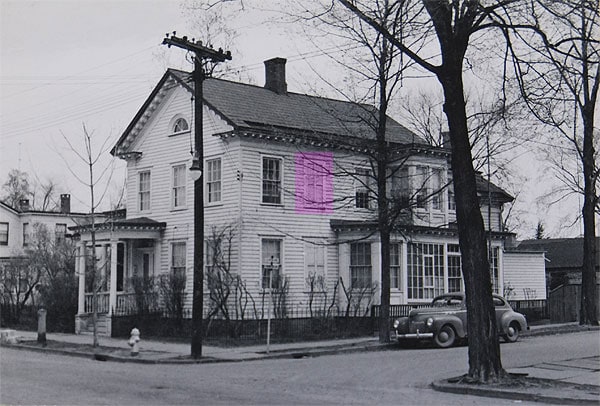 Back in 1950, this photo was taken of the outside of my house. That window highlighted in pink isn’t there anymore, and neither is the one directly below it, but having one in that location totally makes the exterior in my opinion. Or at least that side of the house.

After I saw this photo for the first time, I got all excited about these windows, thinking maybe they were just hiding behind some vinyl siding and a sheetrock patch and how cool would it be to find them! So I did the natural thing and made a hole in the living room wall downstairs to see if, perchance, the window itself or any evidence of it were still inside the wall somehow and found…nothing! The whole wall was plaster and lath with no sign of an obvious patch, and behind it was brick and mortar, which is how most of my house is insulated…but really isn’t something that was done past about 1900. This photo is from 1950, so it seemed super unlikely that somebody between 1950 and now would have removed the window, filled the cavity with brick and mortar, nailed up lath, and applied horsehair plaster. Partly because I don’t think anyone would do that given modern methods and materials, let alone the same people who did plenty of other pretty sloppy work on my house during that same period. Added to this was the fact that false windows—where there are shutters on the exterior to balance a facade, but no actual window at all behind them—are actually pretty common here. I didn’t know that until this old photo of my house sauntered into my life and I started paying attention, but once you start looking for them, you really do see them all over the place! It’s a nifty little illusion.

Fast-forward to me planning the whole side-of-house-restoration project, and it occurred to me that making that false window into a real window would actually be really nice in my bedroom for the reasons outlined above, so why not! I’m doing all this other shit, might as well. 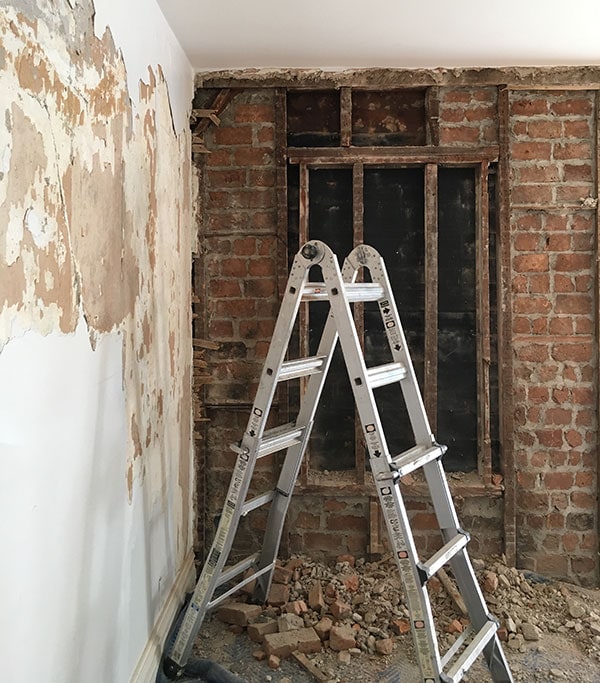 The thing about working with Edwin is that he is a major early bird and I am the total opposite. The man likes to start work around 6:30 in the morning, which is often only a few hours after I’ve gone to bed. Sometimes small things get lost in translation, like when I explained this whole let’s-add-a-window-right-here plan, I didn’t really mean “let’s rip out all of the plaster and lath along this entire wall,” but that’s what happened. Sigh. I think we probably could have framed in the new window while keeping much of the plaster wall still intact, but that ship has now sailed. Spilt milk. Whatcha gonna do.

ANYWAY, when I rolled in at about 9, dude had the wall opened up and had started the brick removal and…what is THAT?! That is unmistakably a window frame, buried in the wall at the location in the old photo, and all of those bricks on the floor had been stuffed into the stud bays. But again…the brick and mortar, the continuous, not-patched plaster and lath, the studs used inside the window jamb matching in size/era to the rest of the framing lumber originally used for the house! IT DON’T MAKE NO SENSE!

It sounds sort of odd, but I still think there was never an actual window here, at least by the time the house had finished construction. Mistakes happen, right? Isn’t it possible that a builder misread the plans, or the architect changed his mind mid-build, or the homeowners came by to check the progress and decided they wanted a little more wall space than all these windows would allow for? It could happen, right? In my head it’s actually a big blow-out fight between the architect (my beautiful, balanced fenestration design!) and the homeowner (where a girl gonna put her chifforobe?!) and ultimately the homeowner won, because that’s how things work, and the architect threw up his hands and left to, I dunno, go smoke opium with a hooker at the local tavern (now my friend John’s house).

I’m sure this is all much more interesting and exciting to me than it is to you since it’s my house and all, but I love this stuff! 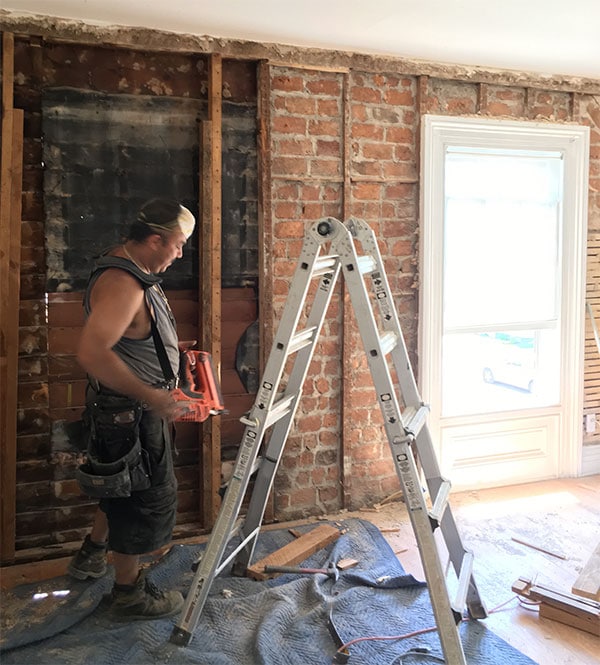 ANYWAY, after Edwin patiently listened to me get all worked up and excited over all this, we went about framing in the new window! I actually decided to move the window over from its original location about 8″, which centers it between the two adjacent windows on the exterior. I thought it would look better both inside and out, but the inside part is going to take a little longer to pay out because I think I’ve hatched a little plan to shift a few walls around upstairs (I know…) which  is a story for a different day. Don’t sweat it.

This was the most deferred gratification part of this process, because we didn’t actually install it until we took the original siding off of this part of the house for the whole clapboard restoration process I made up last year. But this way the rough opening was already prepped and the actual installation was just a matter of placing the window in the hole and attaching the exterior casings, which we now know goes pretty fast. 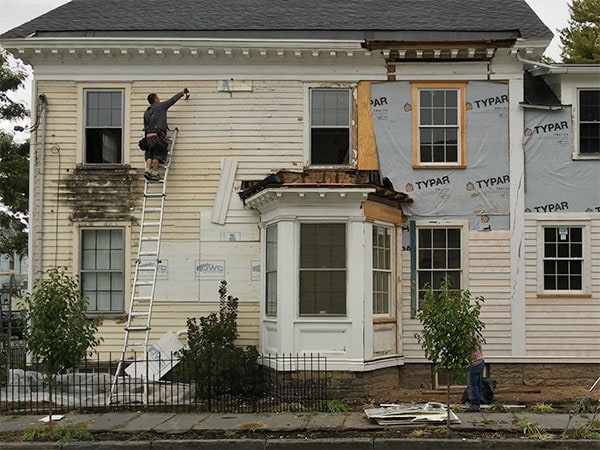 Siding removal for this part of the house was an intense day. It started with removing all of the vinyl and the thin layer of foam insulation underneath it. As usual, the original wood siding (which actually looks pretty good in this picture—don’t be fooled!) was in pretty poor condition. With the new window up on top, the new cornerboard at the front, the new false window on the first floor, the condition of the siding, and the desire to install better insulation in the walls, removing it just makes the most sense! Same story, different wall. 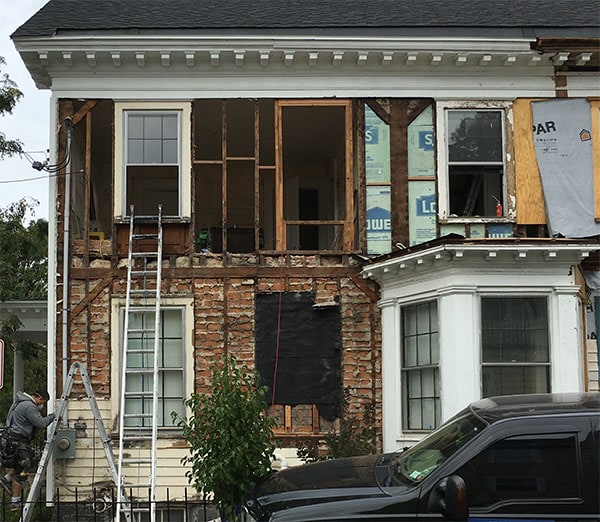 Eek! This is the part where things look so insane and like the house will never be put back together and oh my god, what have I done. 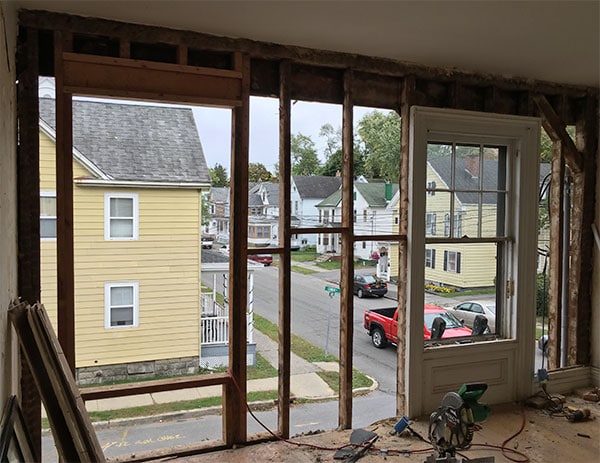 Especially from the inside, where my bedroom was feeling a little too bright and airy for my taste. 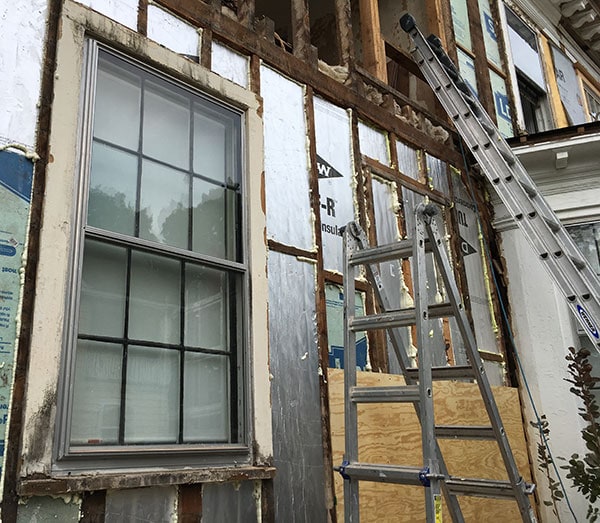 We removed all the bricks, installed blocking between the studs, and insulated with 2″ foam. Boom boom boom! As the sun was setting, we started installing sheathing. Edwin was ready to go home but I threw a small tantrum so he stayed and helped me because this is not how I wanted to leave my house overnight. Ha! 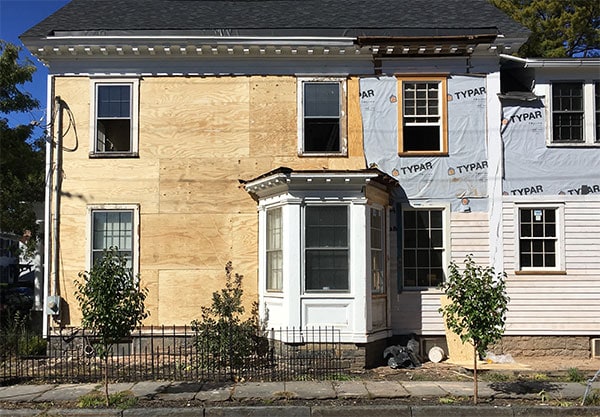 Once the sheathing is up, it doesn’t look so scary. We’re using 1/4″ plywood as sheathing here—I’ve noted this before, but the original house doesn’t have sheathing at all, so using a standard 1/2″ sheathing would add too much depth to the wall, meaning I’d have to extend the jambs, window casings, and sills for the siding to fit correctly. The sheathing has made the siding process slightly more complicated, but nothing too challenging.

Obviously we sheathed right over the new opening, which was mainly because there wasn’t enough time to install the window that day. It’s easy enough to cut the sheathing out from the interior with a reciprocating saw, and the sheathing installation is a little easier if you don’t have to make a bunch of complicated cuts on the ground to fit an opening. 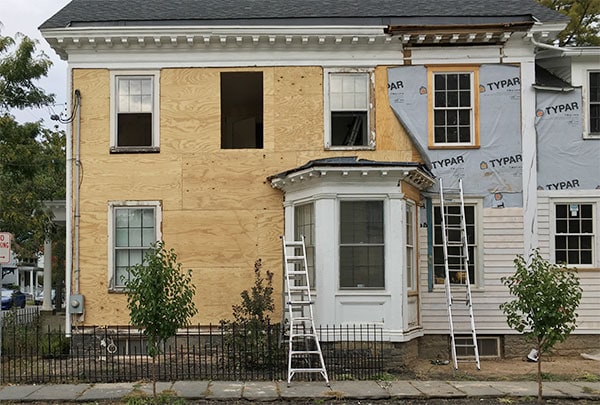 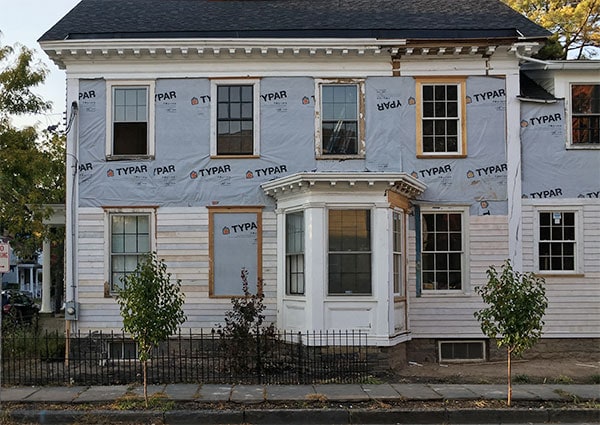 ANNNNNNDDDDD, window! Obviously we’ve jumped ahead a little so you can see the new cornerboard on the left, the false window cased out on the bottom (shutters are waiting patiently in the dining room for their hardware, which should be arriving tomorrow!), and the new bedroom window up top! Isn’t that…satisfying?! Clearly there is still a lot of work to be done, but finally seeing the basic shape of things come together feels so huge! She’s come a long way from this… 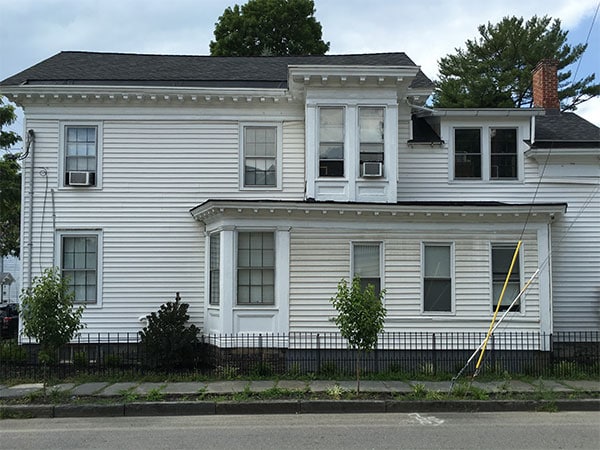 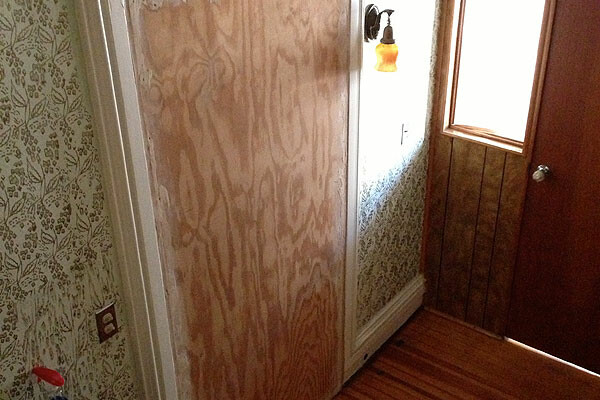 The Doors are Open! 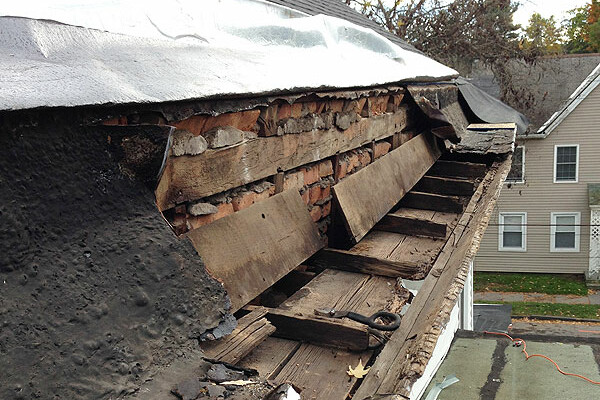 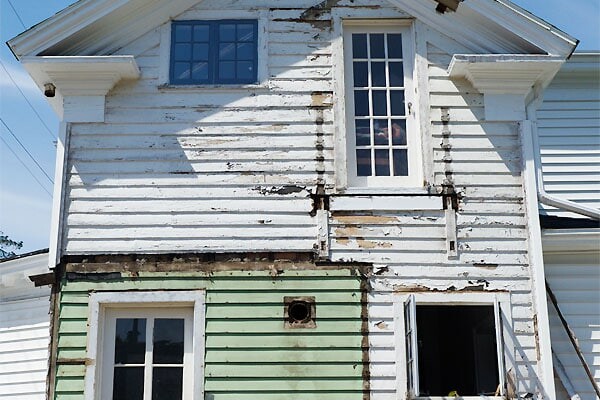