Renovating an old house eats your weekends. Always. I speak for myself, but I think it’s kind of universally true. There’s always a to-do list a mile long and more projects than you can reasonably be expected to complete. Then at the end of the weekend, the to-do list is still a mile long and it’s hard to feel like you’ve made much forward momentum even though somehow you felt so busy the whole time. That’s just how it is.

The big project of this weekend: a reset. Not a mental or physical one, because who has the time, but a house reset. With the bedroom renovation wrapping up and remaining wreckage (YES. STILL.) from the summer/fall exterior project (not quite finished, but the rest will have to wait until the weather improves in the spring), every single space in the house is crying out for some attention. Everything is filthy. Everything is out of order. Tools and supplies are all over the place. Before I dive into anything else, I’ve promised myself that I’ll put everything away, mop the floors, and feel less like a crazy person. It’s honestly possible that this process will go on for weeks—that’s the extent of it! So bad. But it’s starting to feel better.

ANYWAY, I did manage to do one real renovation thing that wasn’t just cleaning and sorting and tossing junk and carrying IKEA bags full of tools and stuff down to the basement. 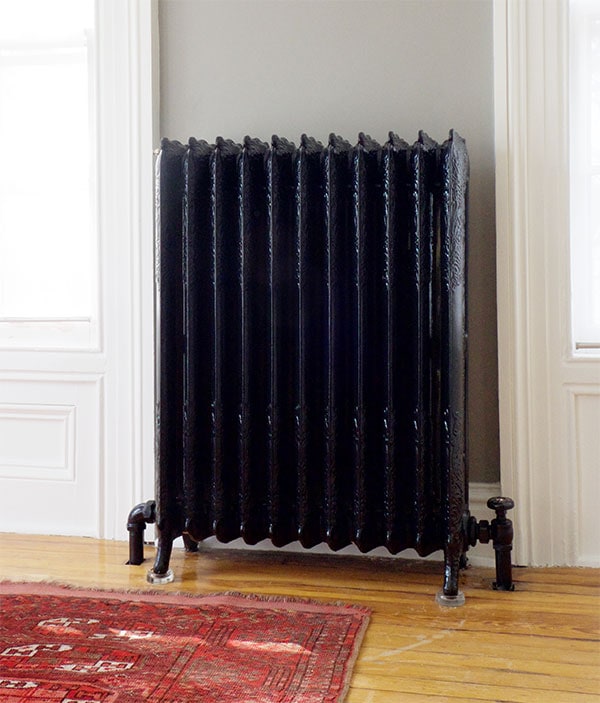 I painted the bedroom radiator! And it looks so…handsome. Mmmmmm, mmmm. 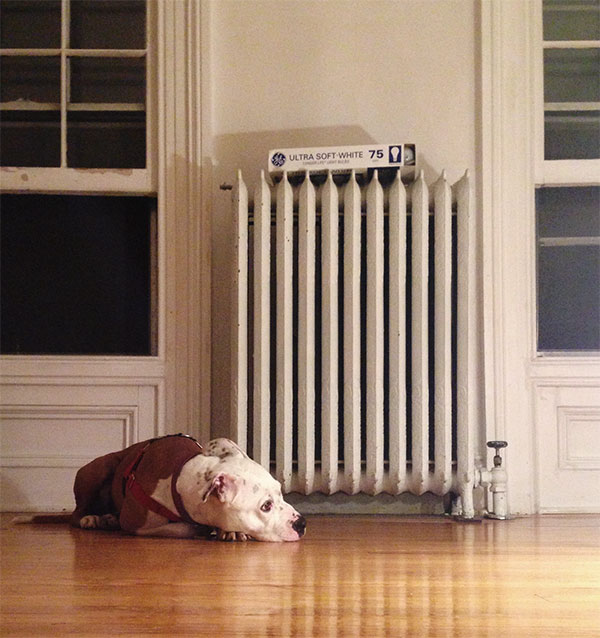 Going back in time, this picture is from the very first night in the house, coming up on four years ago! Look at that sweet baby. We were all feeling very confused and disoriented, sleeping on an air mattress on the second floor—which had no working electricity or plumbing at the time—in a house where the last major thing to happen was the previous owner dying in the bathroom downstairs. Welcome home! We thought for sure we were all going to get murdered, either by an intruder or a ghost.

This is neither here nor there, but Mekko’s adopt-a-versary was this Saturday! Five whole years of Mekko! Where does the time go? I love that girl so much. She’s been such a champ through all the changes our lives have seen together, including renovating this house. Easy breezy beautiful perfection of a dog. 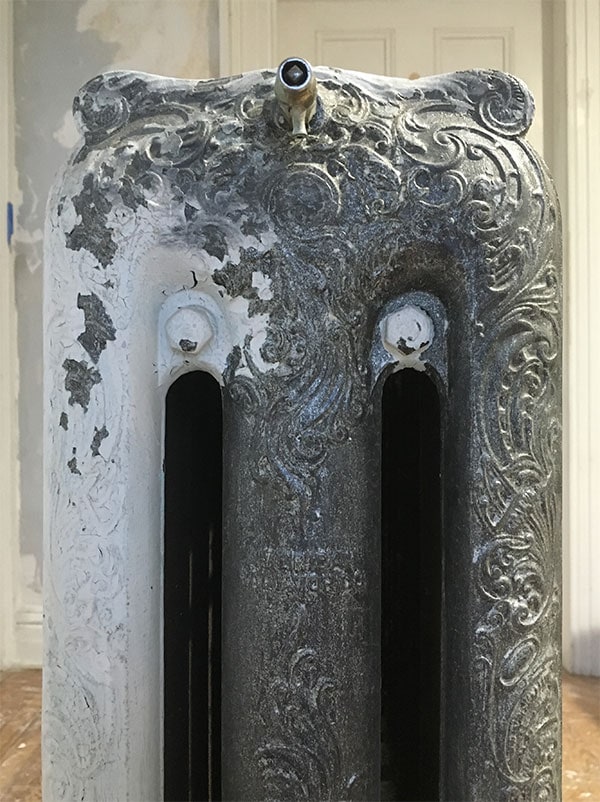 It wasn’t until I started working in earnest on the bedroom that I ever really paid too much attention to the condition of the radiator, which was less than stellar. I think because the second floor of the house was a separate apartment, the whole floor seems to have gotten a lot more attention than anything downstairs—most of the walls seem to have been sloppily repainted many times over the year, floors were (somewhat poorly) refinished at some point, that kind of thing. Over the course of time, it looks like this radiator has been painted a few different times, but I think they were always using the wall paint which is generally NOT a good plan. Regular wall paint might be OK for a while, but it isn’t made to bond with metal so after some time it all starts flaking.

In this case, much of the paint was not well-adhered and could be pretty easily chipped off with a collection of scrapers and picks and steel wool and the like, right down to the bare case iron! Which is very cool, in theory. I spent several hours over the course of a few days doing just that before I realized that I could probably spend the rest of my life manually scraping this thing. I tried some Peel Away paint remover on one fin as a test, which didn’t work super well and was a mess to clean up, and then I just said…NOPE. Enough of this. Sometimes you have to aim for perfection but then accept something less in the interest of not being stuck on one thing forever. 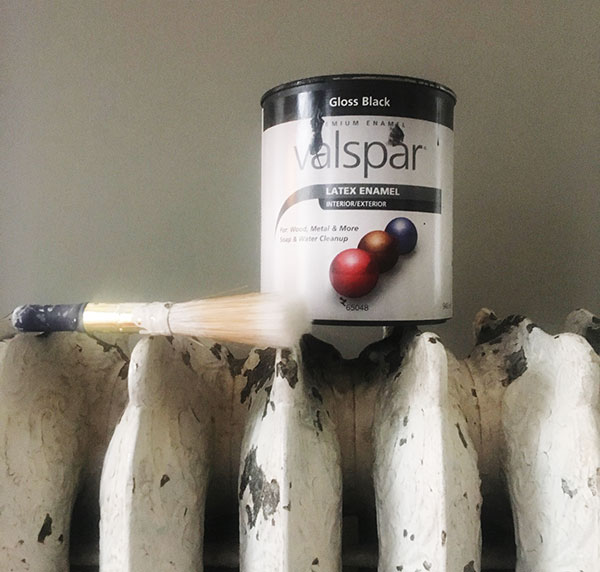 Enter, Valspar latex enamel*! After I felt confident that I’d scraped off what was clearly lifting and peeling from the original radiator, I used a dryer vent brush to clean between all the fins and stuff and then wiped everything I could down with some TSP substitute. Then, paint time! I LOVE this paint**. I used in on the radiator in the living room too without really knowing how it would perform, and it’s been FLAWLESS. No chipping, no peeling, dries very quickly and very hard, and can frequently be wiped down with a damp cloth to clean off dust. Since it’s interior/exterior, this is also what I plan to begin using on the exterior of my window sashes. It seems to perform very similarly to oil-based paint, but dries WAY faster and is easier to work with and clean up and more environmentally friendly than oil paint and all that good stuff.

*Consulting the can (just now, haha), they recommend this paint over primed metal—oops! Most of the radiator was still painted already so I’m just going to go with calling that the primer. It seems to have adhered perfectly to the bare metal, but it’s only been a couple days so who knows. I’d be really surprised if it peels. In any case, there are specific metal primers that are readily available that couldn’t have hurt.

**I have hot water radiators that never get THAT hot, so I know from past experience that I don’t need paints that are made specifically for high-heat applications. Steam radiators tend to get hotter and some hot water systems heat up more than this one, so if you’re in doubt it’s probably wise to use a high-heat paint. You should be able to find both spray paints and regular canned paints for this. Spray paint is great for radiators, but I’m too sloppy to do the proper prep to avoid overspray on walls/moldings/windows/floors/my body.

(Also I didn’t notice that my iPhone camera lens had some schmutz on it, so forgive the dramatic airbrush effect). 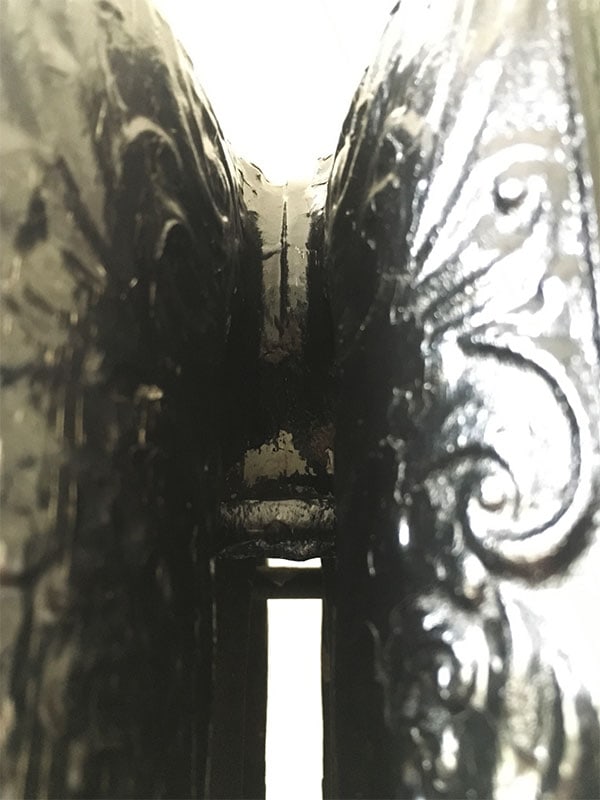 Ugh, this is so hard to photograph, but after my first coat I noticed there were some inner nooks and crannies that I couldn’t seem to really reach with a brush but you could still see when looking at the radiator. Especially going from white to black, this kind of thing can make the whole project look kind of sloppy. 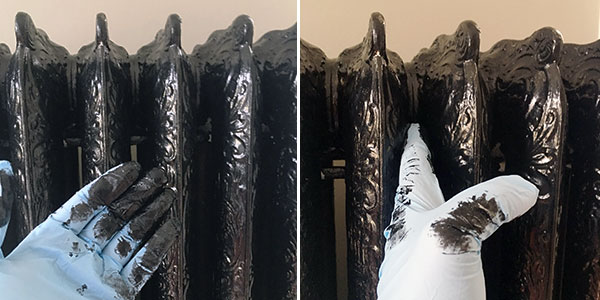 The answer turned out to basically be finger-painting! Fun! For those inner crevices, you don’t have to worry so much about getting perfect coverage—just good enough that the old paint isn’t visible. I used to have this kind of painter’s mitt thing that works well for things like this, but I’m not sure I would have been able to reach the really tight spaces with it.

Then I followed up with a second coat with the brush, and that was pretty much it! 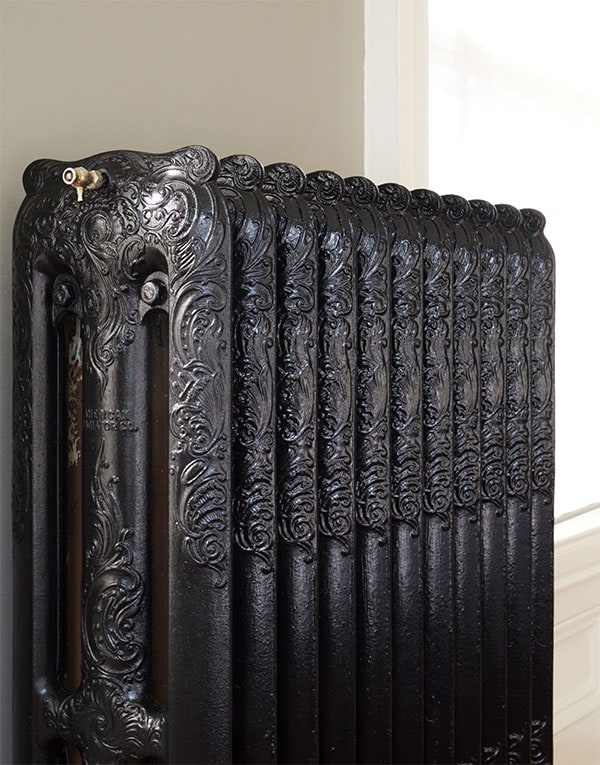 Isn’t that just gorgeous?! You might think that all of the details would get lost in the black paint, but it’s really the opposite. Especially because of the gloss factor, the details are now so beautiful and clear! I also LOVE how the black looks combined with the wall and trim colors. It’s all just making me very happy. 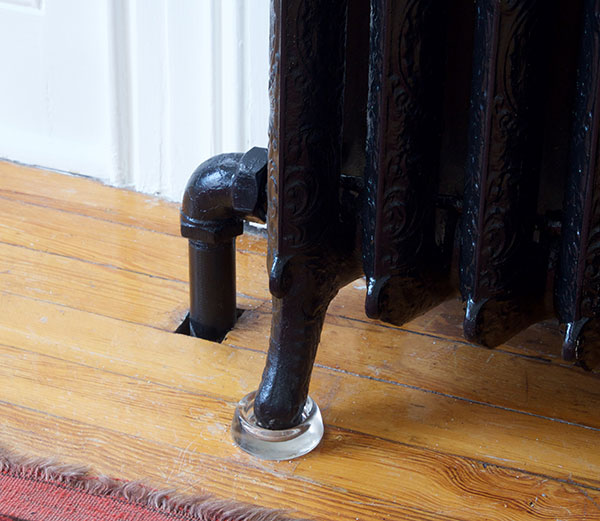 Radiators work best when they’re sitting nice and level, which doesn’t always agree with the floors in an old house! I love vintage glass furniture coasters to prop things like this up. You have to be careful not to break them as you’re putting them in because the weight of the radiator can obviously easily break the edges and stuff, but once they’re in they hold the weight just fine. I tend to find these around junk shops and antique stores, and usually they’re not more than a couple bucks a piece. 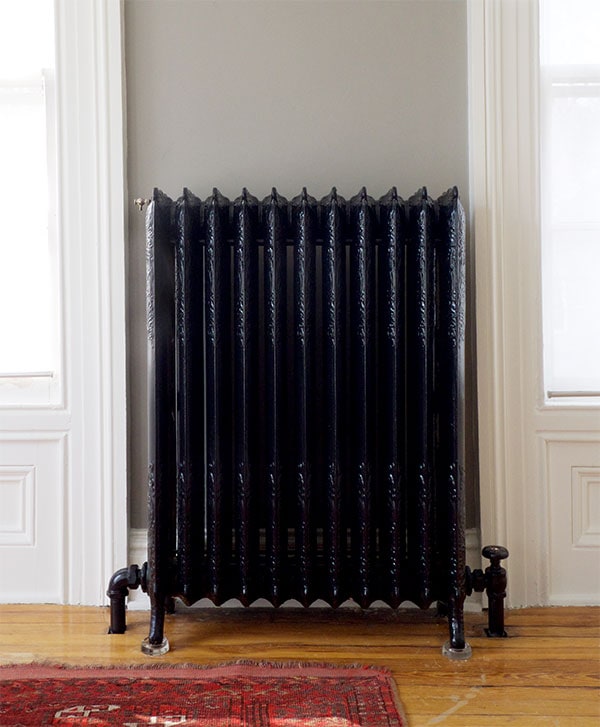 That’s it! I need to pick up some escutcheons for where the supply and return pipes go into the floor, but otherwise I’m calling it done! MAYBE someday I’ll be feeling really flush and decide to have the radiators sandblasted and powdercoated, but in the meantime I’m more than satisfied with how this looks and happy that I don’t have to worry about the paint continuing to flake off all over the place.

And look, I remembered I have a big rug! It’s not what I picture in here long-term and the size is a little weird (an 8×10 would be ideal, and this is like 7.5’x12′), but having something down immediately makes the room feel much more complete. Rug hoarding for the win! 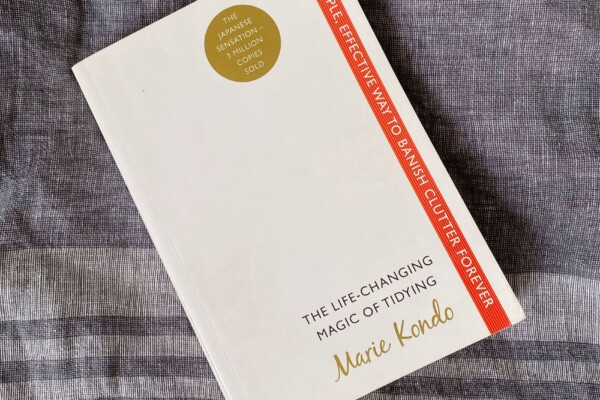 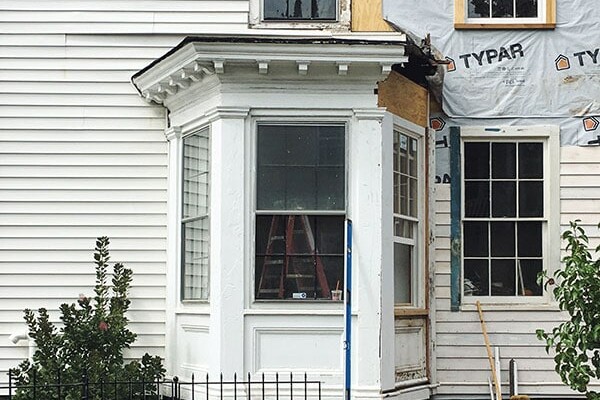 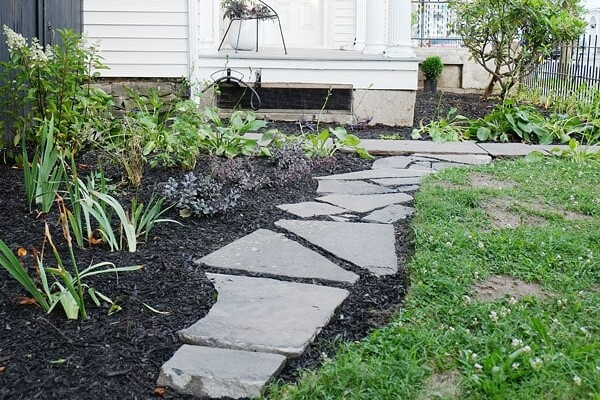