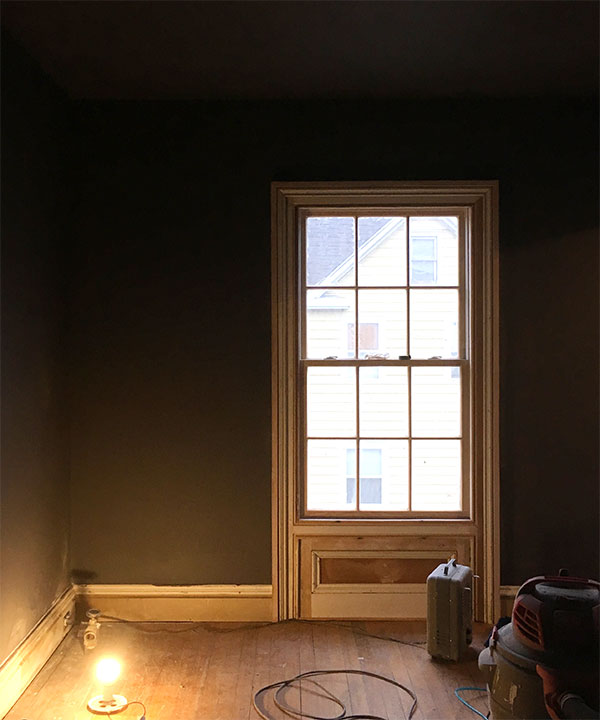 There are several different molding treatments in my house, and—like many old houses—they follow a formal hierarchy between rooms. Basically the fancy rooms have the most ornate moldings, and the less fancy places have more modest ones. When renovating, I try to be very careful about this stuff, because even if everything is new and looks great it should still be appropriate to each individual space! 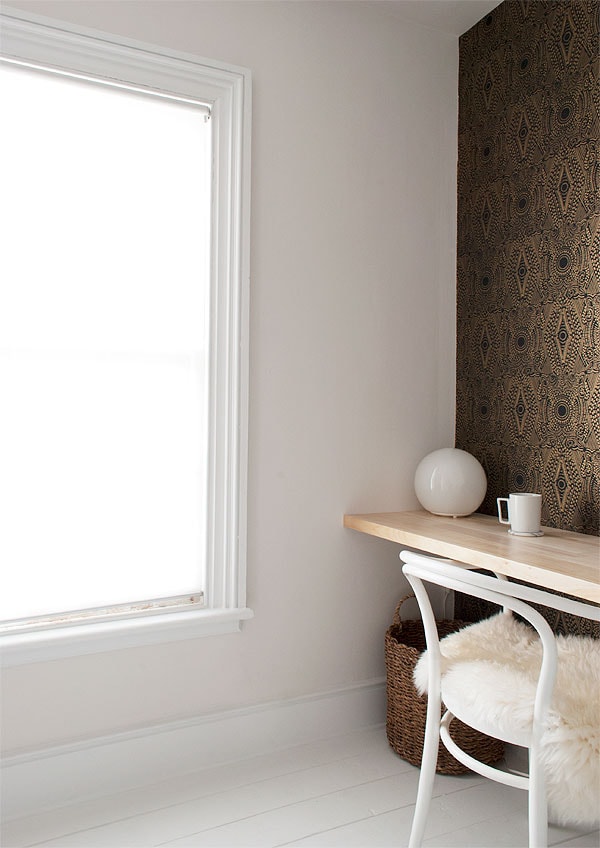 For instance! This is a decent view of the moldings in that funny upstairs room I turned into a little home office, where you might be able to tell that the baseboards are a very simple profile and the window is cased out with a stool and an apron rather than the panel molding, like you find below the windows in my bedroom. The piece that makes up the foundation of the window molding is actually slightly different and narrower, too. The baseboard is similar to what’s in the den, except the den has a more decorative cap piece on top. Essentially, the moldings in the den are more formal than this little room, but less formal than my bedroom.

Which, for me, begged the question (for months): what do I do with this new window?? A stool (just FYI, because I only learned this recently: a sill is on the exterior, and a stool is on the interior. Both are often called “sills” but now you know better and can be annoying, too!) would be easier to execute, and might look more natural in terms of matching what’s in the adjacent room? But maybe this room would have had a panel, like the bedroom, because it is a more formal space than the little office?

I went with panel. I think I made the right call. Someone once told me that when making decisions like this in an old house, don’t be afraid of going too formal. I try to renovate more or less like a purist and decorate like a lunatic, so formal it is! 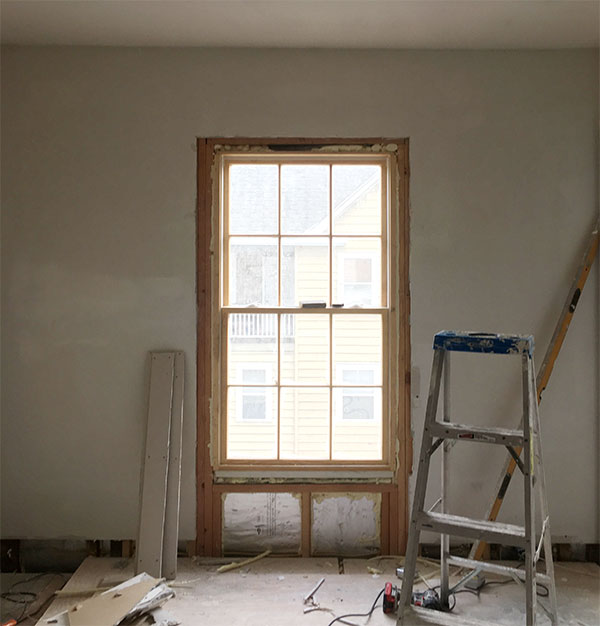 Naturally, this had to start with cutting out the brand new drywall work right below the window—oh well! It’s just a couple of feet and with the help of my oscillating saw, I didn’t damage any of the surrounding new drywall work while removing what was in the way. 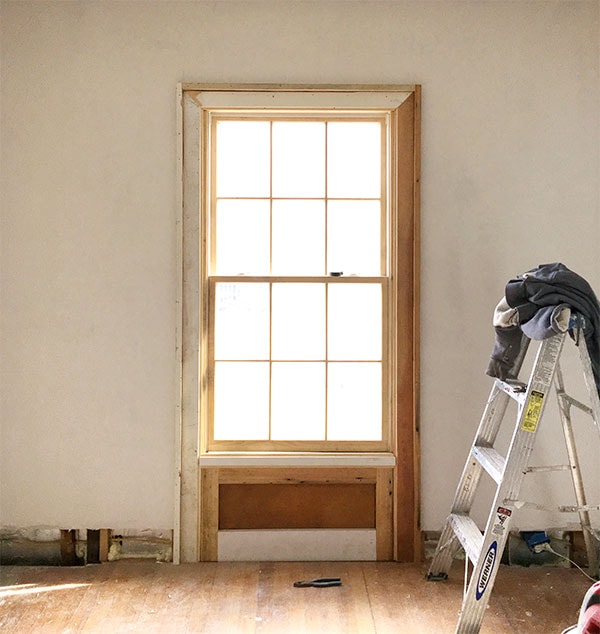 I always have a hard time stopping to remember to take progress shots, but here’s the basic framework of it all! I’m not going to lie, it’s kind of complicated. The back part of the panel below the window sits recessed from even the framing, so I also had to use my oscillating saw to cut that framing down a bit. It would have been better to have done this before installing the framing in the first place, but at the time I thought this window would be getting a sill and it wouldn’t matter!

As usual, this is all salvaged wood! I like using salvage for a couple reasons: 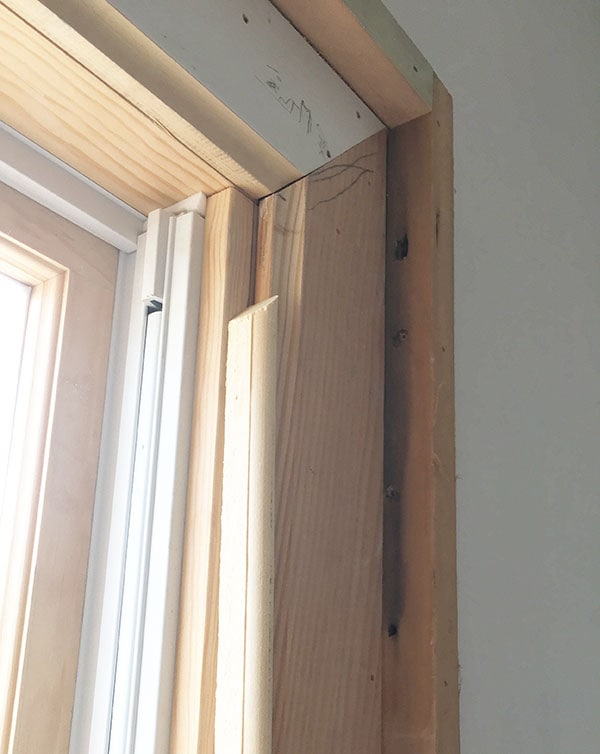 Even though the individual pieces are fairly simple, there are a lot of pieces! And trying to match new to old takes some serious head-scratching. I have a router and some bits, though, so milling my own simple profiles isn’t such a big deal. Here I had to use the router to create the cove effect on the flat boards, and then I used a large 1/2″ bead bit (I have this set!) to create the rounded profile that kind of fakes a window stop. Then I run it through the table saw to get a 1/2″ thickness, and then it gets tacked to the existing stop that’s part of the window jamb on these new windows. It’s tricky! 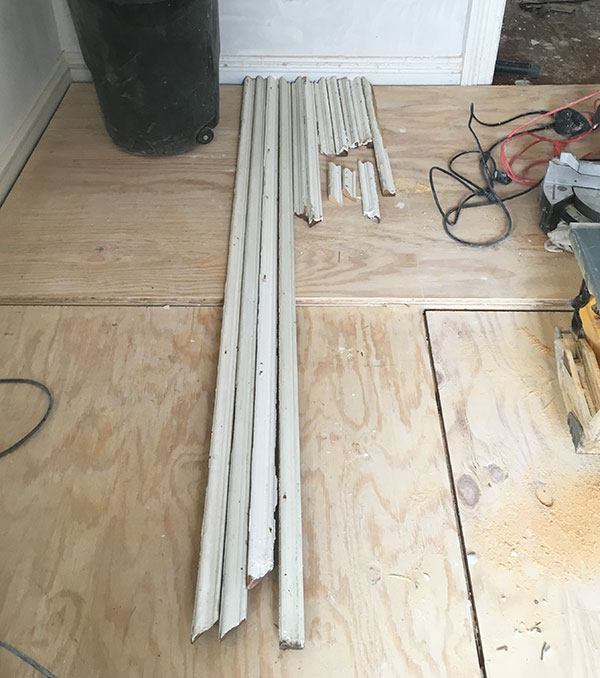 The only piece that I can’t really replicate myself (YET!) is the simple-ish but fancy molding that creates the transition between the flat boards and the deep ones that sit perpendicular to them. This is what’s left of my entire supply! Especially when I have precious few pieces to work with, I like to lay them all out on a flat surface in size order, so I always choose the shortest available piece for the run I need. This of course minimizes waste, but also allows me to maintain as much old stock as I can.

There’s a stock molding profile at Lowe’s that’s very similar to this, and I can’t decide whether that’s good enough for the kitchen or if I should get this profile replicated. I mean, I know the answer, but…money. 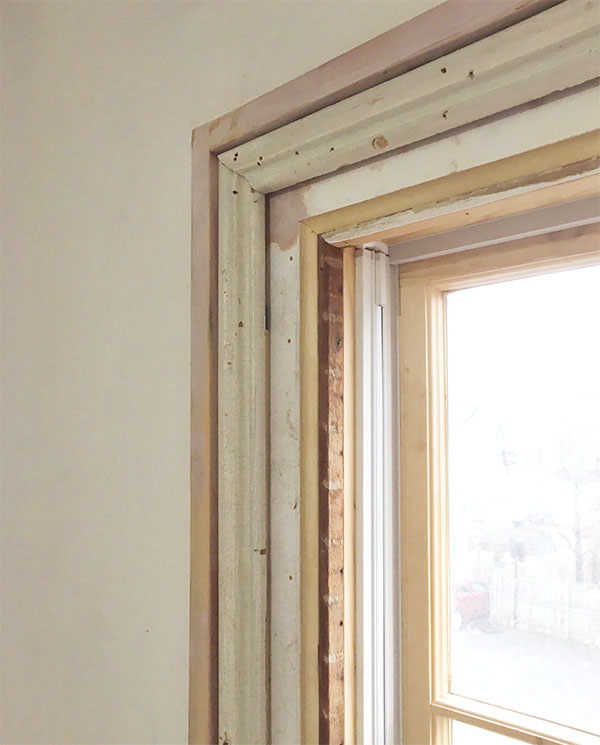 But there it is, installed! Again, I want it to look original so no need to strip all the paint. I do a little scraping and sanding and then up they go to get caulked, primed, and repainted.

See that dark piece of wood on the innermost part of the casing? That’s an actual window stop, which has been used for the past 150 years as a shim for the lath on the ceiling of my kitchen! Now for the first time, it’s serving the purpose it was milled for. Fun, right? Maybe only for me. I need more stimuli clearly. 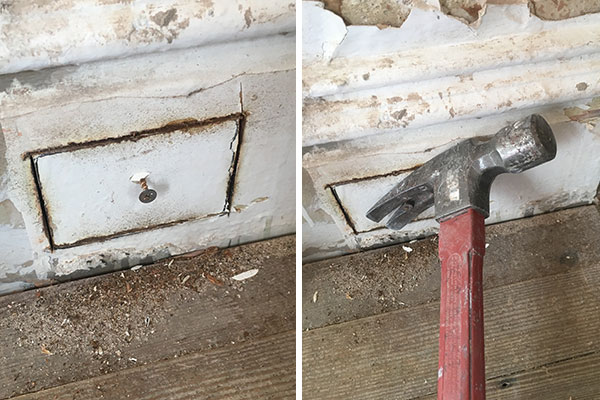 Because this room was short on electrical, I added a few baseboard outlets to the new baseboards and the existing ones. Rather than removing the whole baseboard, it’s pretty simple to trace the electrical box and cut it out with an oscillating saw. Then just drive a drywall screw into the center and use a hammer to pry out the cut-out! Then you can insert your box and pull the wires through. For the new baseboards, it’s easier to mark my location, make my cutout with a jigsaw, and then install the baseboard like that—being careful to pull my wires through the hole before attaching the baseboards to the wall. 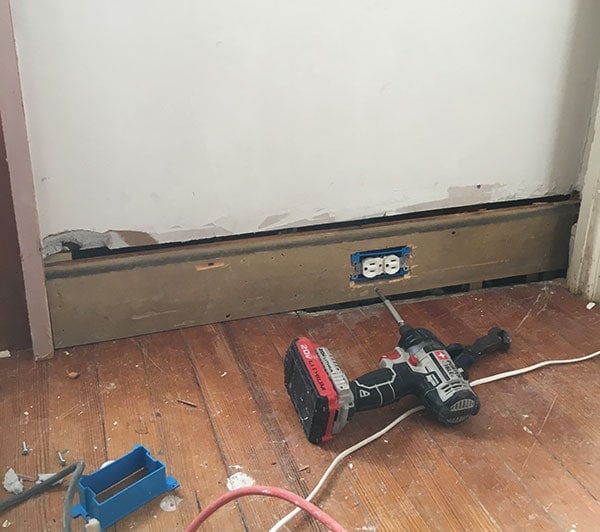 For the new sections of baseboard, I was really excited to find this piece of salvaged baseboard behind the wall in the upstairs kitchen (boy, we’re overdue for an update on that!), untouched probably for about a hundred years! It’s kind of dirty in this picture, but I believe that’s the original paint color for a lot of moldings in the house, which is kind of a muddy yellow-greige. I kept a small off-cut and I want to try to get it color-matched, because I think MAYBE that’s my new kitchen cabinet color?? We shall see.

The gap between the flooring and the baseboard will get covered with base shoe molding. It would look a lot nicer to do it now, but I’d rather just live with some gaps and wait for the floors to get refinished, and then do all the base shoe at once. 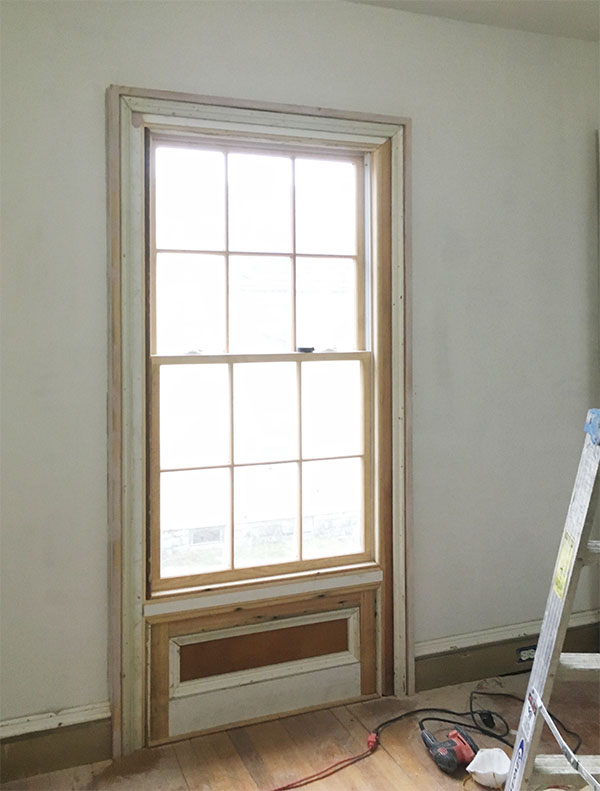 Not so bad, right? I mean it took me two days but now that I’m writing this post, it doesn’t seem so bad. Haha! I think there are 28 different pieces of wood on this window casing, not including a few shims hiding behind the finished pieces here and there. 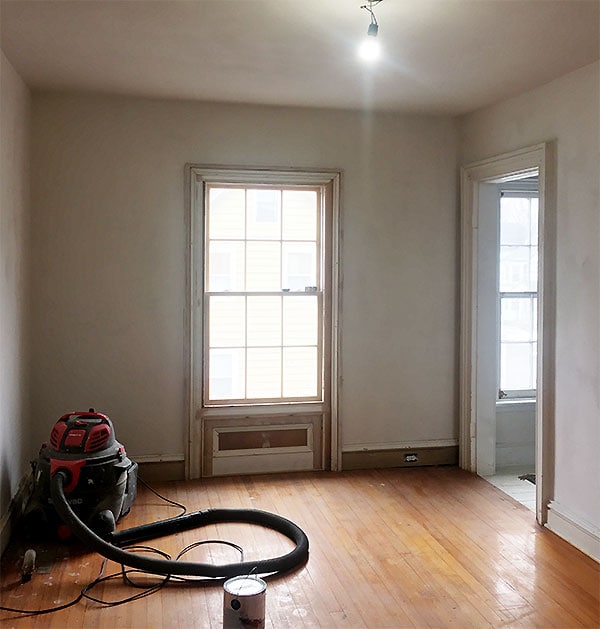 Even before painting the new moldings, I was starting to feel like the room was so much lighter and brighter than I had expected, and maybe I wanted it to stay that way? I do love a bright sunlit room! I don’t fear dark paint but I also know it’s not right for every space, and maybe I was trying to force it? 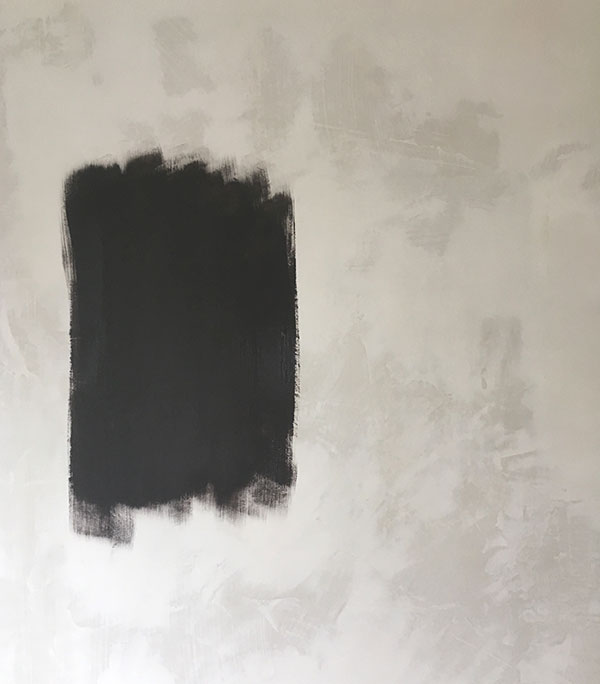 I painted a sample. The sample got me excited. Full disclosure: I chose this color solely because I had two leftover gallons from another project, and I liked it in that room, and it was free, and I like free, so there ya go. It’s a Benjamin Moore color called Flint, which was color-matched with Valspar Reserve paint. It’s a really deep inky blue-black-charcoal—very rich but doesn’t really read as black in the space, especially next to black-black.

Then one thing led to another! Ohhhhh shit! 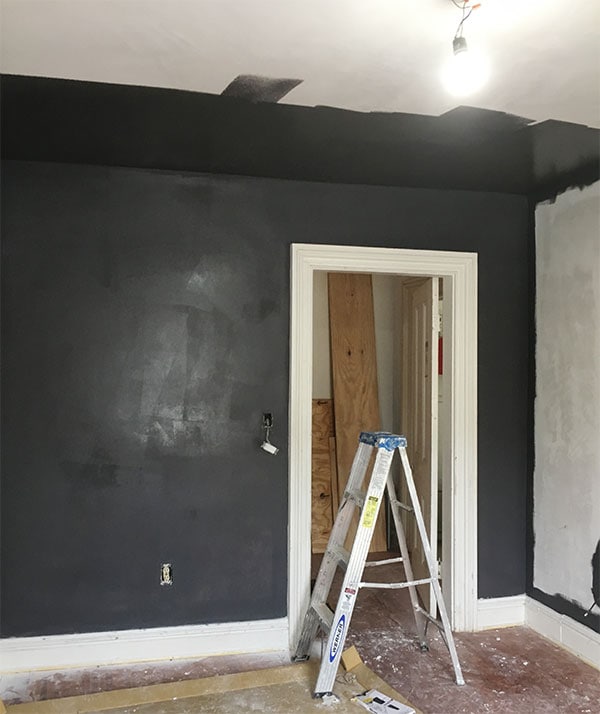 No lie, it was not exactly love at first sight. Painting something a dramatic color is always exciting, but I still wasn’t sold. 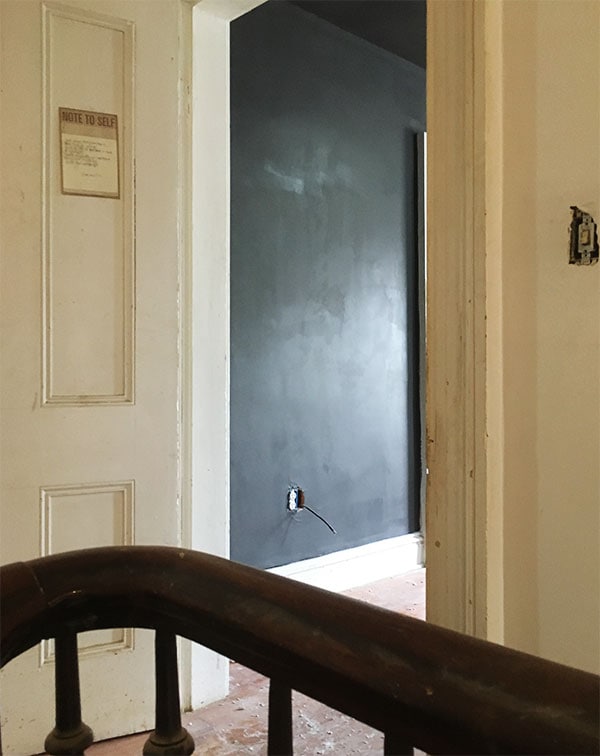 I went downstairs to grab something and walking back up the stairs, I was sold! This door is almost always open, and that peek of a really dark room at the top of the stairs is just so nice! Make me wanna go cuddle up to a dog or two. The unevenness is just the paint still drying, don’t worry. 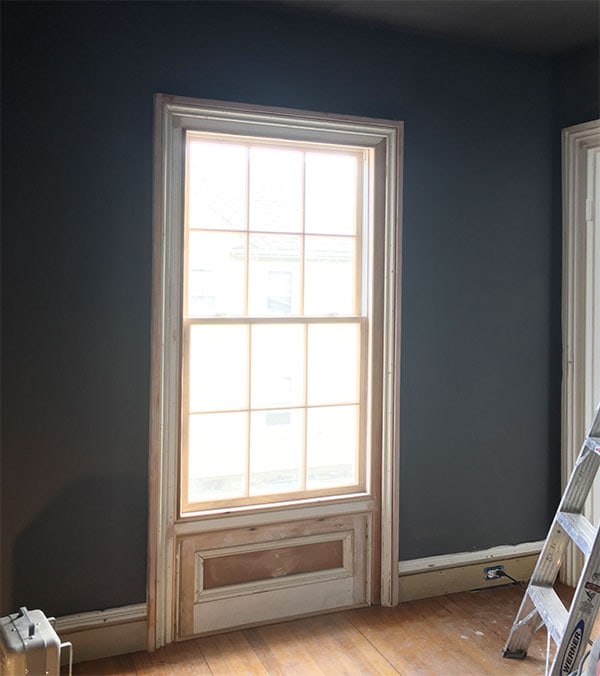 Ahhhhh, yeah. I’m about it! The dark walls DO swallow up a ton of natural light, but in a good way. It feels so cozy! I wanted cozy! This also means this room needs a fair amount of supplementary lighting, which as a serial hoarder of lamps I find appealing. 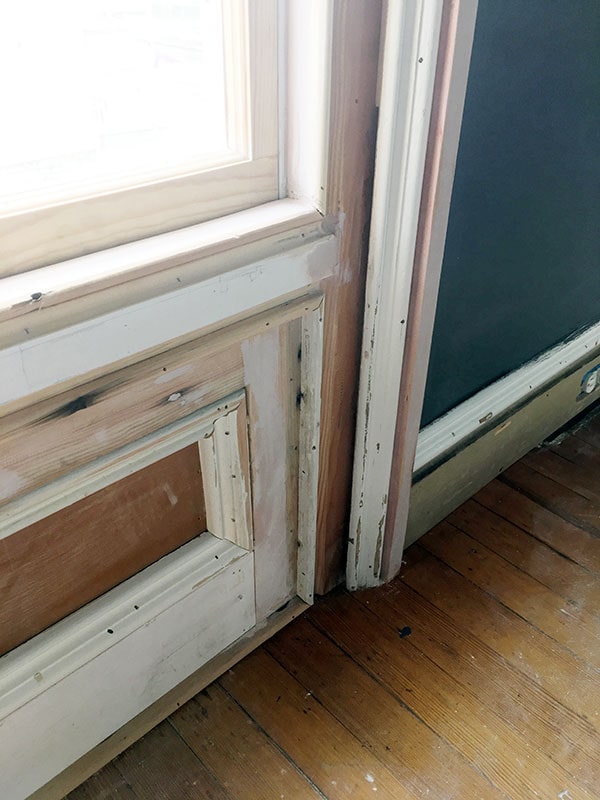 Circling back to the moldings, all that pink filler is my BFF, Bondo! I’ve never had an issue with Bondo separating or cracking when used on an interior surface, but I wouldn’t recommend it for exterior. Bondo can’t make up for really lousy workmanship, but it can compensate for a lot. It also does a nice job of filling in grain, which makes the wood look like it has more paint on it than it does, which keeps all the moldings looking uniformly imperfect, if that makes sense. 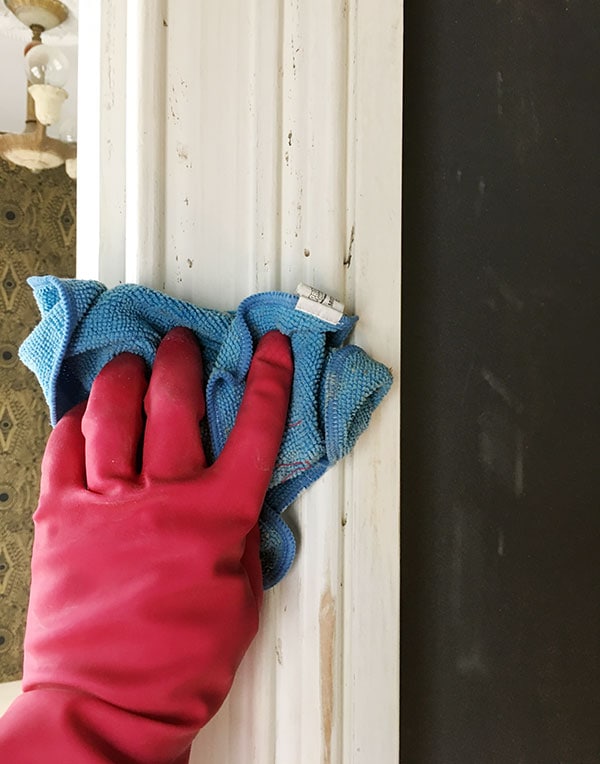 Before moldings ever get a lick of paint, they go through a little rehab. The first step is cleaning: I like to use TSP substitute, following the dilution instructions on the package. These moldings were especially dirty from all the demo work that this room endured.

Then I use my palm sander to knock down any lumps and bumps, then a filler and/or caulk where needed. After the filler is sanded down, everything gets wiped down again and THEN it’s paint time. I tend to favor a 2″ angle brush for cutting in on the walls and painting moldings. 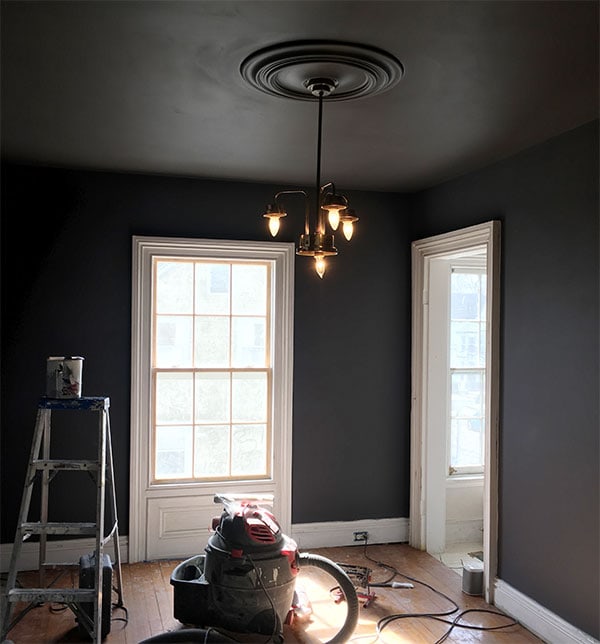 Yes! In this picture, the new casing and baseboards just have primer on them, and the rest of the moldings still need paint, but you can get a sense of how the room is going to look! I’m really happy with it. I also put up a ceiling medallion (the same one I used in my bedroom) and the light fixture, although the shades aren’t up so don’t judge yet! The pink glass shades really make the fixture.

It’s going to be way cute. I know because the room is basically done now! It came together so fast, at least given how long it usually takes me! These photos are a few weeks old so the room has furniture, art on the walls, a working television set, and now it’s my new favorite room in the house! I have to photograph it and then I’ll show you the whole thing soon! Eek! 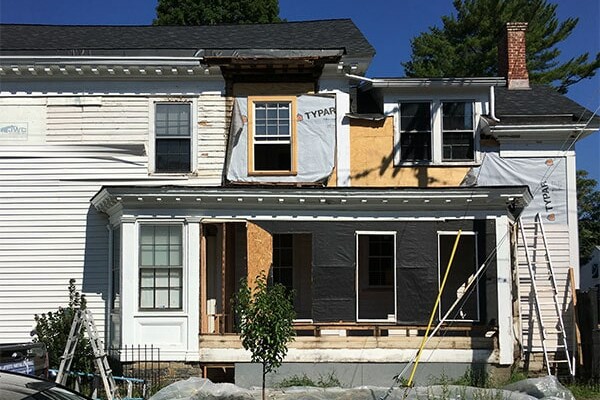 The Solarium is Gone! 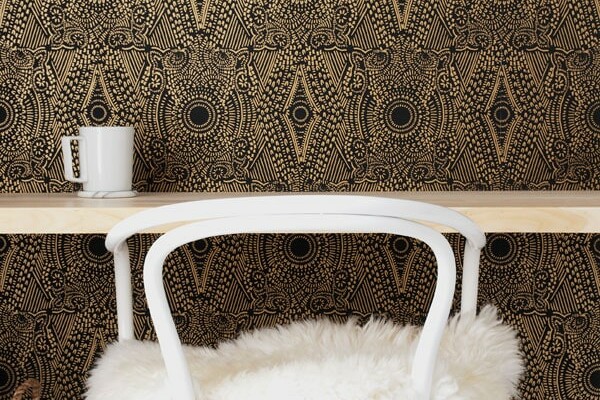 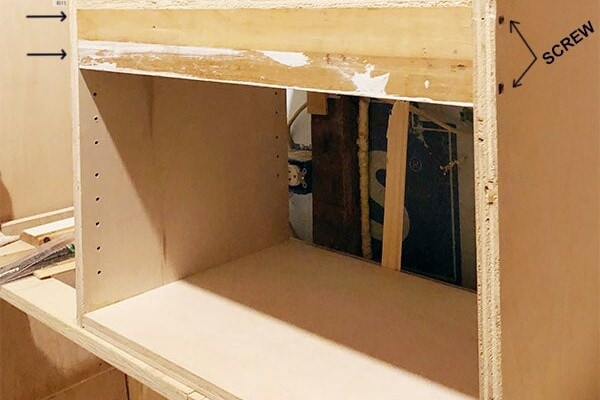