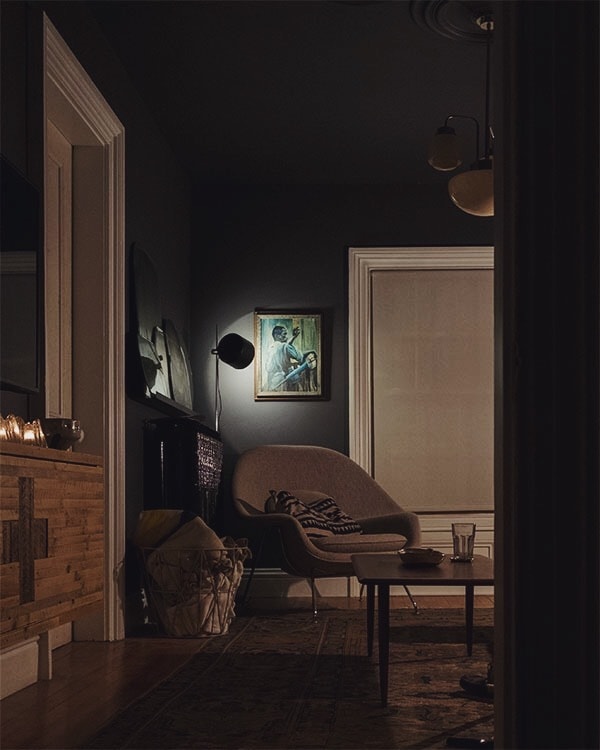 Oh hello. Funny seeing you here at this time of night. Looks like you had a hard day? It’s almost the freakin’ weekend, so let’s get started early and chill: opium den style.

Here’s a Manhattan. I’m on my second.

If you’ve been following along recently, you know I’ve been working (here, here, here, and here) on this small-ish weird-ish room on the second floor of my house to make a cozy little den, the primary purpose of which is to watch TV and relax forever. I wanted it to be super cozy, full of things I love, and simple enough for the small size of the space but still layered and intimate—a nice little hideaway for myself and some friends if and when I procure some. For the past couple of weeks I’ve been at the futzing stage with this room, which is when I put on some back-season of my recently reignited old love, Survivor (if you don’t look up who won, you can pretend it didn’t happen 10 years ago!), and put up art and swap around chairs and lamps and take frequent breaks to collapse on the sofa because I CAN. I love how it’s come together! This room needed a lot of the same work as the recently-completed-ish bedroom, but for some reason this one felt so much easier, both to renovate and get some decor happening that I actually like. Let’s pretend it’s because I’m getting better at this, and not that I’m just HIGHLY motivated by using my TV again?

We’ll go with that. 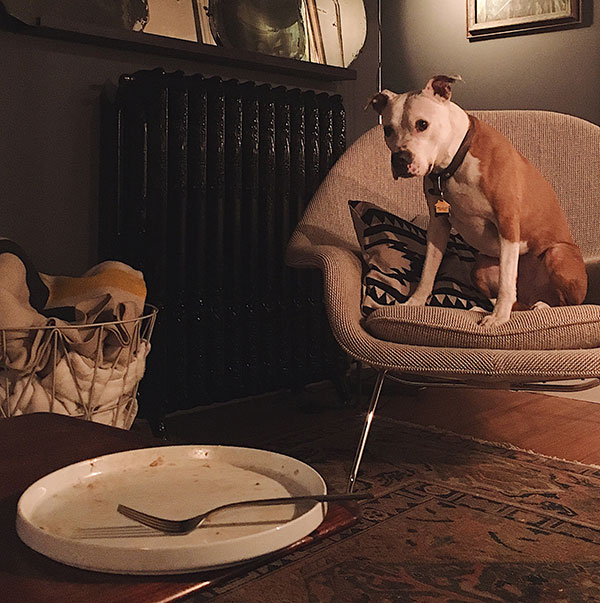 The other night, bae came over and we broke in the opium den officially. Here’s how I like to do it:

Step 3. Take a drink. Take a hit. Take whatever floats your boat. Not the hard stuff.

Step 4. Do that thing where you scroll through iTunes, Netflix, Hulu, and HBOGO indefinitely until you land back at the thing you wanted to watch in the first place. We bought Get Out on iTunes which, sadly, I missed in theaters because I never leave the house. It always feels like a big commitment to actually purchase a movie on iTunes, and then I remember it’s less than the cost of two movie tickets. I don’t know what that’s about. Anyway. 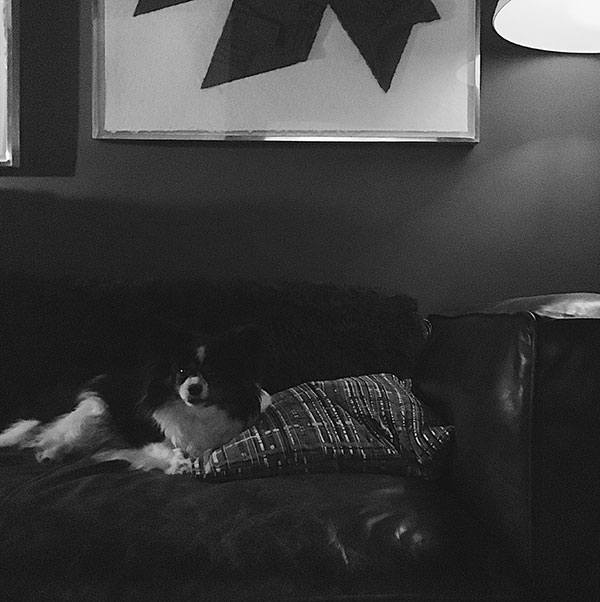 So one excellent addition to my life has been that bae brings with him an impressive dowry of not one but two dogs. So essentially I have four dogs now. It’s so many dogs. I love dogs.

This is Gertie, alternately known as Officer Gert. She keeps the crew in line. She’s squat on her legs and big in her behind and does not like anyone acting up or seeming like they might be thinking about acting up. Gertie spends all day taking care of Linus: cleaning his face and ears and sometimes a part of his back she seems particularly fond of, and steps in when the other dogs get rowdy too close to him. 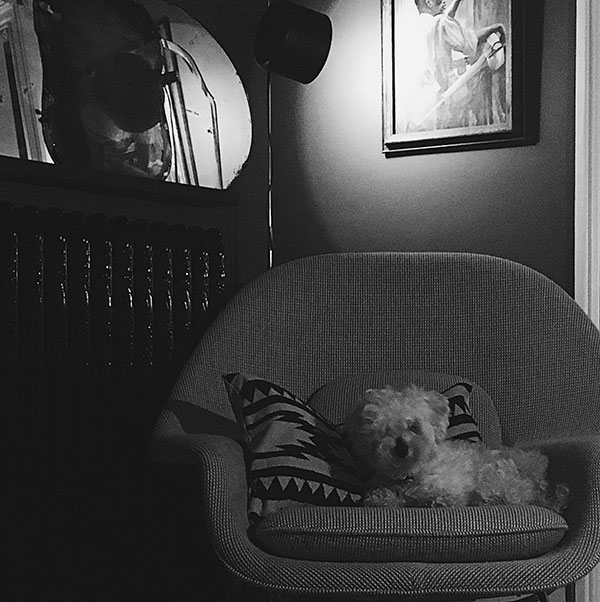 Linus. Linus! He needs a grooming. I love and cherish when he’s more of a muppet, but this is about as long as his hair can get without curls starting to mat.

That is, by the way, the best dog in the world. I don’t play favorites but yes I do and Linus is my favorite. It’s been five whole years since that guy stumbled into my life, which makes him around 15 years old now. I think that means Linus needs a whole separate post because otherwise I’ll get carried away, but man. My little man. Still trucking. 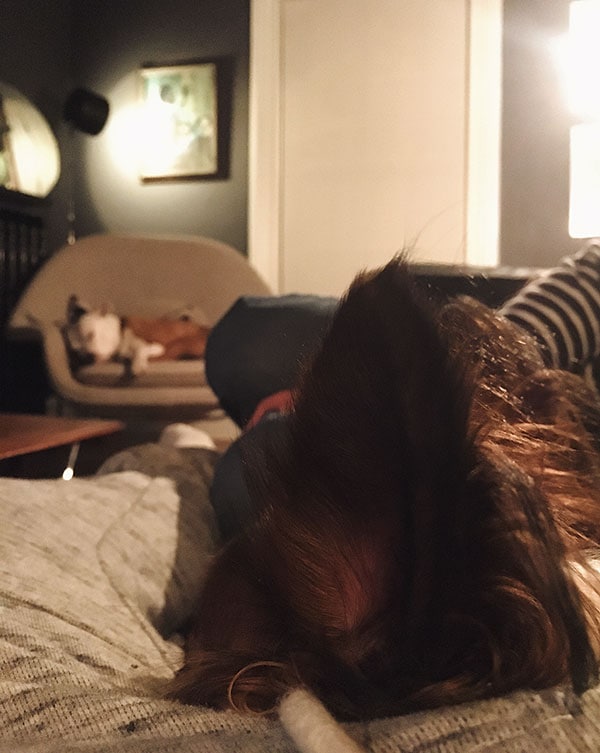 This is Fox’s ear, because his face is buried in my sweatpants’d crotch. It’s pretty much where he lives unless he’s running around causing terror. Fox is not an actual fox but rather an oversized Papillion who looks a lot like a fox. Also, bae shares my everlasting love of The X-Files, so. Fox.

Fox and Mekko are inseparable. Poor Mekko used to just have Gertie and Linus who are no fun as playmates, and now she has Fox who is a little too much fun. He’s such an annoying younger brother. I love him.

Bae is in the background there. He likes a striped hoodie and long walks on the beach. Calm down. 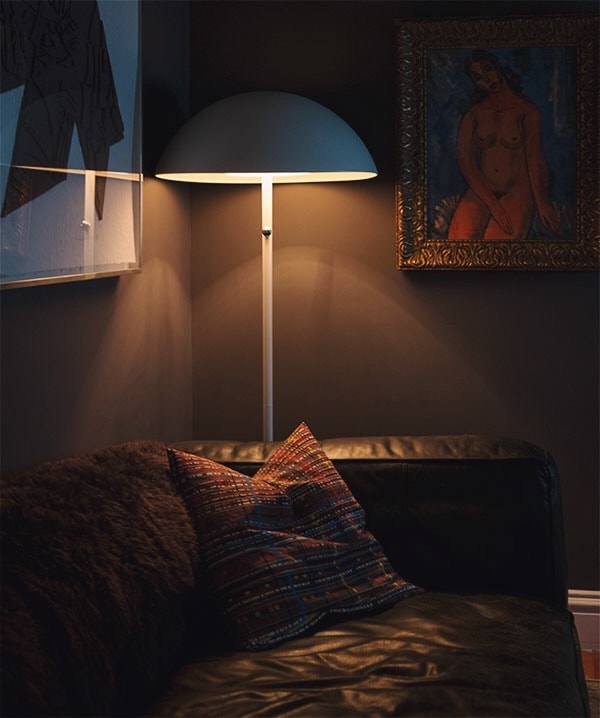 We’ll talk way more about the room when I can show you in daylight, because night photos are tricky and I feel like we need the light of day to really appreciate things like that bright orange naked lady in her guilded frame. Anyway, this corner of the sofa I think is the most comfortable place in the house. The seat portion of the sofa is pretty much the size of a twin bed, which is honestly kind of too amazing, in that I want to live on it. That discontinued IKEA lamp dims and gives off great light—I’m glad I found a spot where I like it! I love that lamp but it’s never landed anywhere that it felt right before. 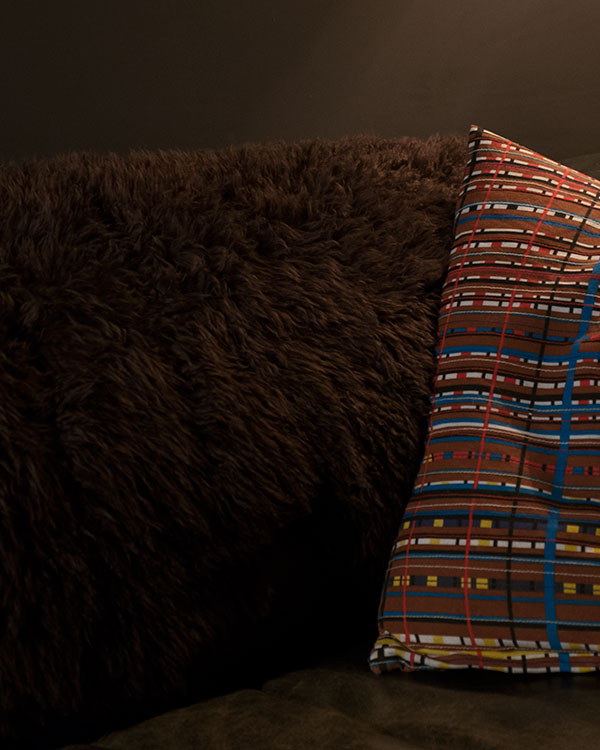 Gertie’s favorite spot in the house is sprawled on this sheepskin across the back of the sofa, which comes from the fairly new-to-me company, Article! Especially if your style leans more modern, do yourself a favor and scroll through their products—so much good stuff (big and small!) and really well-priced. This sheepskin is perfect here because it’s almost exactly as long as the back of the sofa, wide enough that it can be draped over the back but stays in place, and covers an otherwise noticeable dip in the back where Susan and Will’s dogs used to love to nap! It’s also super soft and cozy and adds a nice shot of texture, and it’s ethically sourced from New Zealand or Australia and non-toxic, so it should last for decades. The sofa itself is a well broken-in black leather, and I really dig the combo of dark browns and off blacks in here. I know it’s a faux pas maybe and I don’t care!

Also I have been carting around that pillowcase since HIGH SCHOOL because I loved it and held out hope that someday it would look good somewhere. It brings me joy so leave me alone about it. It’s originally from IKEA. 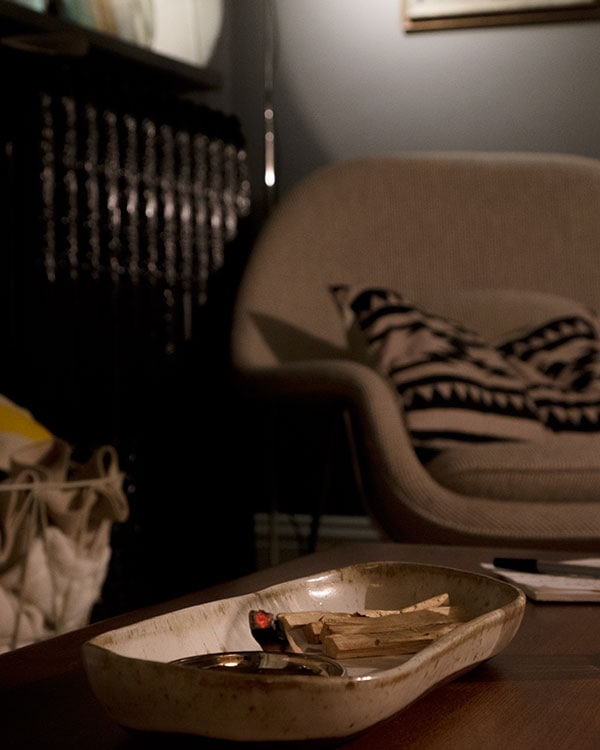 I’m not really a fan of most scented things, but I love (LOOOVVVVE) some Palo Santo wood to burn as incense. I scaled back my candle game for the purposes of not looking crazy in pictures on the internet, but it can get reallllll witchy up in here. Sticks burning, candles everywhere, lamps dimmed down or off…yes. I aim to be as witchy as possible during relaxation time.

By the way, back behind my weird piece of thrift store pottery in the foreground, there’s a little notepad and a pen, which I’ve realized I have some version of around me at all times. I make notes constantly of ideas or little sketches or lists, because otherwise it’s all just in my head and it makes me crazy? So I write a lot of stuff down. I’m really opening up here, I don’t know.

Also, that chair back there is my womb chair, which I was lucky enough to inherit when my parents downsized! I thought it would be too big in here, but it ended up feeling just right. It’s been in a few different places in the house, but so far I like it in here best. This seems to be a theme with this room! I’m not really sure why. Do dark rooms kind of decorate themselves? 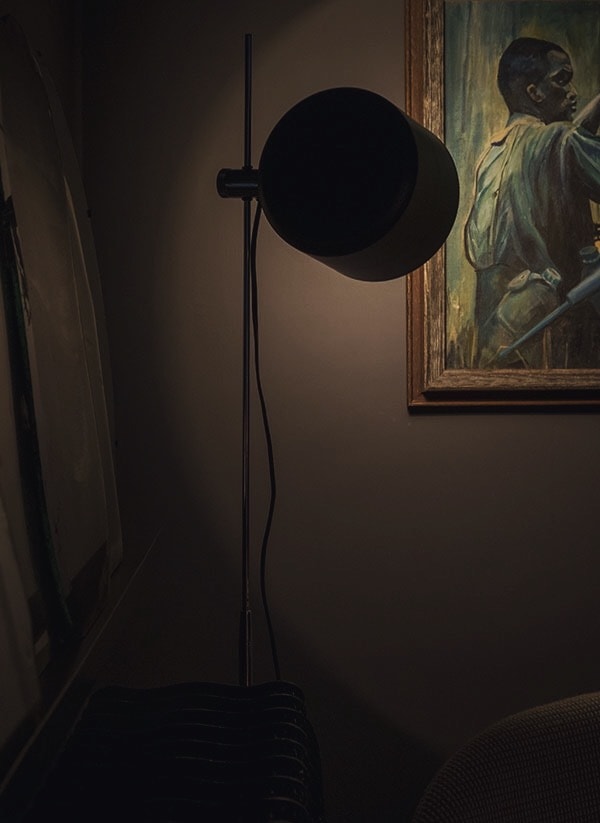 Lighting that corner behind the chair was a challenge (you know, the kind with zero stakes)—even though I have tons of lamps, not a single one of them felt right! It always felt too bright and too directed either down at the chair or up at the ceiling, and I just wanted something very slim and simple with a soft light. The Rise floor lamp—also from Article—ended up being pretty perfect! It comes in white too, but I love how the matte black finish of the shade disappears with the wall color to keep the corner from feeling too crowded. Having never bought anything Article before I wasn’t sure what to expect from the quality, but it really is excellent! The shade swivels around to any direction you want, and the height adjusts, and the whole thing is very sturdy on a heavy substantial base. It turns off with a push-button on cord at floor height, which is great since it’s a slightly awkward squeeze to lean in and turn something on at the top. I’m into it illuminating a painting—just enough light bounces off the painting and the wall for the corner to feel super inviting and not like a black hole. For now I’m enjoying this strange painting I found in the trash. I don’t know what’s going on with this guy but I figure I’ll stare at it for a while and try to figure it out. I move art around like a crazy person. 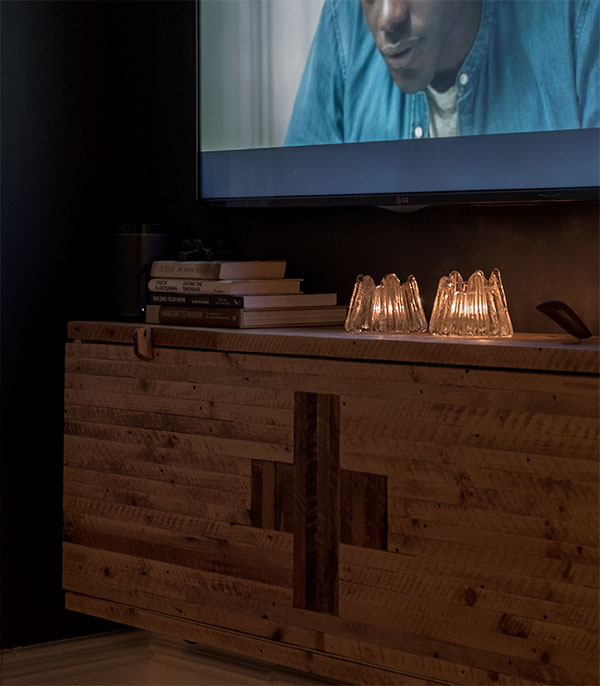 Oh yeah, that cabinet. Whipped it up one fine Sunday a couple weeks ago. It was really fun. And I finally used some of my lath!! It sorta made me want to abandon most of my other goals to play with lath all day instead. We’ll discuss more soon.

The movie, by the way? SO GOOD. I’m glad I bought it so I can watch it again. Which I already did. 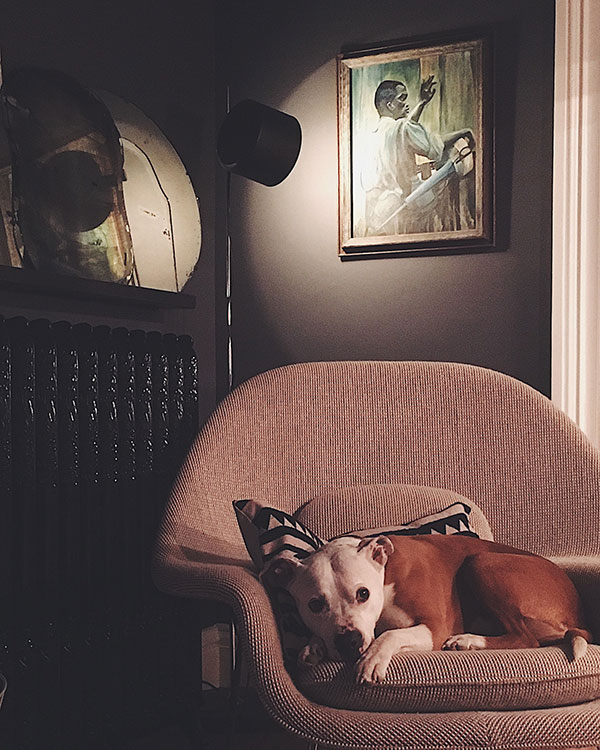 Thank you for stopping by! And thank you to Julia and Kim for bringing me in on the A Night In series fun! It wouldn’t really occur to me to take artificially lit photos at midnight, because I am blogger and we shoot always by the light of the sun,  but this room was pretty much designed for Netflix & Chill so now you know what that looks like! We’ll do a day-lit reveal soon!

Want to see more bloggers betraying their secret training and showing their spaces at night? Hop on over to… 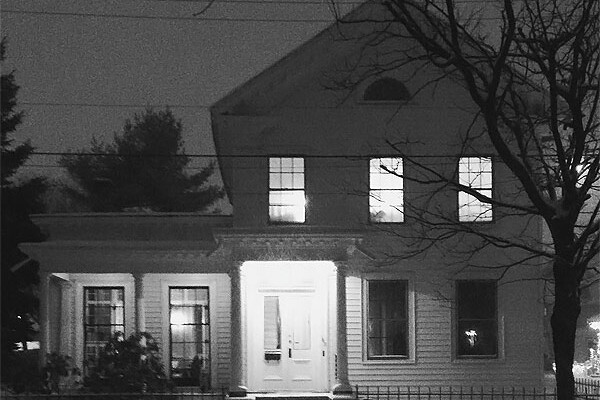 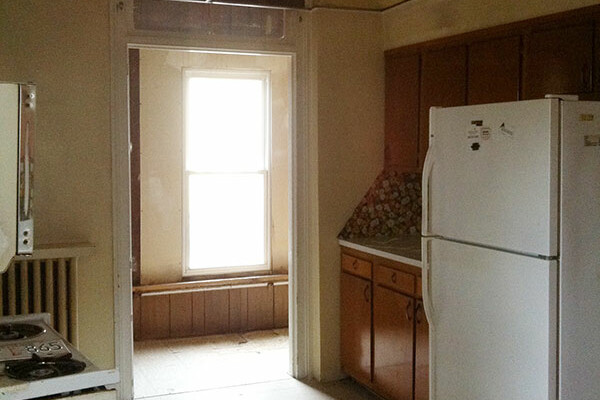 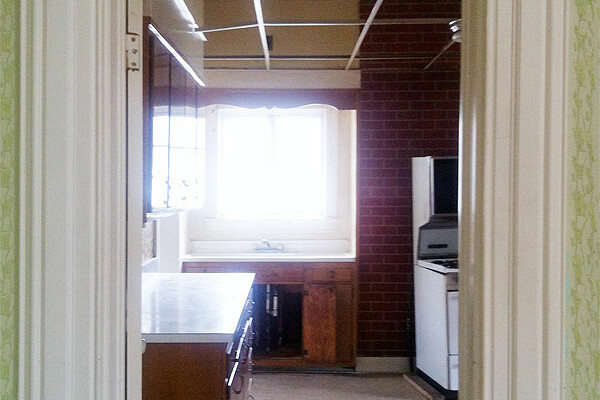 The Kitchen: Inspiration and a Plan!