Pretty much since the second I bought and started renovating my house, I’ve felt like I really needed a pick-up truck. At the time, I was driving the same Volkswagen Jetta I’d gotten in high school—a petite and sporty four-door sedan which, I discovered, perfectly accommodated 8-foot lengths of lumber. I loved that car. But soon the time came to replace it, and I was really thinking about a pick-up truck. Basically everyone in my life told me this would be an expensive and regrettable mistake what with the new car prices and all, and I’d be much better off somewhere in the middle between the pick-up fantasy and the teeny Jetta reality, and that’s how I ended up with the very practical and—regionally, at least—extraordinarily popular Subaru Forester. I cannot tell you how many times I have pulled into a parking space and been surrounded by 3 identical Subaru Foresters in the adjacent spots. I lose it all the time in public lots and garages, and one time I tried to drive away in the wrong one because the owner had left it unlocked and parked three spaces behind me on the street. It was the different smell inside that tipped me off to my mistake, and then the car seat. It’s a Very Good Car by all accounts and I don’t blame others for choosing it: it’s comfortable and safe and has leather seats and it can fit a reasonable amount of stuff. And I haul around a lot of stuff. It also has a handy sunroof, demonstrated below. 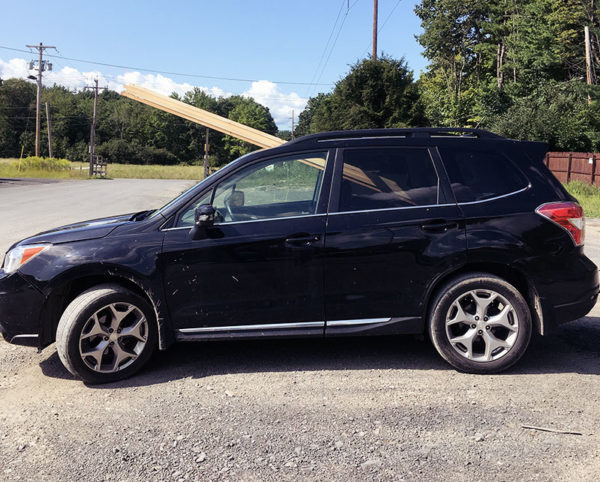 I’m not sure where it was pointed out to me—probably in the comments on this blog—that this is a great car if you’re, like, a guy who goes back and forth from the city to his country house and does projects on the weekends. And I think that’s probably accurate. The problem is, that’s not me. I still don’t really consider myself a professional contractor but I play one a whole lot of the time, and this is simply not an appropriate vehicle. Firstly, because it has major limitations for what it can fit. Secondly because it’s actually a nice fucking car that should hold some resale value, but using it as a work vehicle means scratches, dents, damage, mess, and major wear and tear. It just does. 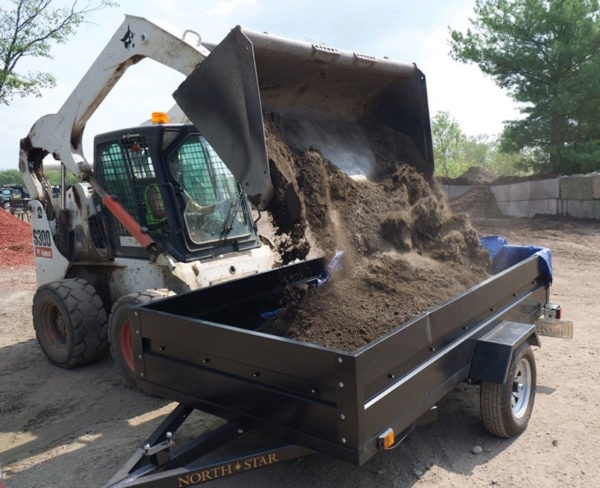 To compensate, my brilliant solution was a utility trailer that hitches to the back of the Subaru and gets dragged around. While handy, the thing is a goddamn hazard on wheels. First of all, you essentially become the length of three cars, which is unwieldy and difficult to park and not something you want to drive around any longer than you need to. Secondly, I find it hard to control in reverse, and although my skills have improved immensely, this personal development came at the cost of both corners of the Subaru’s front bumper, a rearview mirror, and a large sheet of molded plastic that ripped off the undercarriage, which evidently is called the engine splash guard, which sounds important. The trailer is big and heavy and a pain to put on and take off of the car, and then it has to be stored somewhere in the backyard where it’s inevitably in the way. One time it bumped a curb and an entire wheel flew off, leaving one end of the axel dragging along the asphalt and spitting up a dramatic display of sparks. Another time, the hitch part wasn’t fully attached when Edwin took off with a couple thousand pounds of concrete, which meant that the trailer was being dragged only by the chains that keep it attached to the car in the event that the hitch fails. Those of us witnessing it outside the car screamed in unison, which prompted him to brake suddenly, which resulted in the trailer violently colliding with the back of my trunk. I have not fixed any of this damage because 1) $$ and 2) something else will just happen again as long as this trailer nuisance is part of my life.

I hate it with the fire of a thousand suns. This last event was almost a year ago, and I think this might have been the moment that I resolved, for the thousandth time, to procure a pick-up by the following summer. Which is now. I accepted that this would probably mean owning two cars and made peace with it. I have big and ambitious plans to do a lot of landscaping work—more specifically, hardscaping work—which involves hauling around lots of heavy stuff. I couldn’t face another summer of further trashing my fairly new Subaru, or trying to borrow friends’ trucks, or renting trucks all the time, or relying on deliveries and the slippery timeframes and headaches inherent in that. I just want to be able to do the things I need to do without it being a whole thing.

In case it wasn’t plainly obvious, I am so not a car guy. I don’t know anything about them and I don’t care to learn. I do not know how to change my own oil. I have never jump-started a battery or changed a tire, and I have to be told when it’s time to have the brake pads or tires replaced. It’s not that I’m afraid of driving a stick-shift, more that I am severely disinterested by the entire concept. I find comparing models incredibly tedious and I don’t know what half the words mean. I had to look up the terms “cab” and “bed” and “4×4” and I swear that is backed up by my browser history. It’s just a whole area of culture that I couldn’t possibly care less about.

As it happens, there are many types of pick-up trucks out there. And those shits hold value! Stuff will be like 12 years old and listed for $15,000. Also a lot of them are manual transmission. Also a lot of them don’t drive, but instead are being sold for parts. And sometimes they don’t have a title? There is so much to know. I wanted to spend about a thousand dollars, on a small automatic pick-up that could haul a lot of stuff at once. After extensive research which started and ended with noticing cars around me that looked like maybe something that would fit the bill, I was looking specifically for a Ford Ranger, Toyota Tacoma, Nissan Frontier, or Dodge Dakota. EXCITING, I KNOW. I limited my search to the sketchy wilds of Facebook Marketplace, which seemed like a path of least resistance and a manageably few number of options. I spent about a week checking back whenever I was on the toilet for new listings.

So. I see one that looks decent. Message guy. Guy is a mechanic. Truck runs and drives good. I schedule to go check it out the next day. I check it out. Looks decent. Drives weird. Guy says he knows what’s wrong and he’ll fix it. I come back the next day. He has fixed it. Car still drives weird. Guy realizes he did not in fact fix it but says he can and will. Unsurprisingly I do not understand what the issue is, but am now feeling both wary and invested because I have driven an hour round-trip two days in a row to drive his broken car. I tell him if it is really fixed I will buy it. He insists it will be. I register the car, get the plates, and add it to my insurance policy. I go back for the third time. Car is fixed. It drives like a car. I hand over the money and leave. Half a mile down the road, the Check Engine light comes on. Of course it does.

Admittedly, I felt some immediate buyer’s remorse. I did not want a broken car, and since I’ve never actually had a pick-up, maybe I was vastly over-estimating how much this would really improve my life or even get used. Maybe this was a big stupid waste of time and money.

I took it to a mechanic who had very not-nice things to say about my new car. Something about some part on or above or inside the engine that is probably bad, and that it might make more sense to scrap it than throw good money after bad. A friend recommended a different mechanic so I took it to him. He was rough around the edges but fixed the issue and then didn’t charging me for the work, which…does that happen?! I feel like cars are always a thousand dollars. Whatever is wrong, it will cost a thousand dollars. A few weeks later I remembered that he installed a new battery, so I went back and insisted he at least charge me for that. He’d forgotten he did it but was grateful I didn’t, and now…I think I…have a mechanic?? This is a relief because I think I will be needing him with some frequency. It’s also new for me, and I can’t wait to casually refer to “my mechanic” in conversation. Prior to this, “my mechanic” would have just meant the grumpy guy at Jiffy-Lube trying to upsell me on air filters, but now it’s an actual man named Rob who fixes my car and isn’t a drama queen about it. God bless you, Rob. 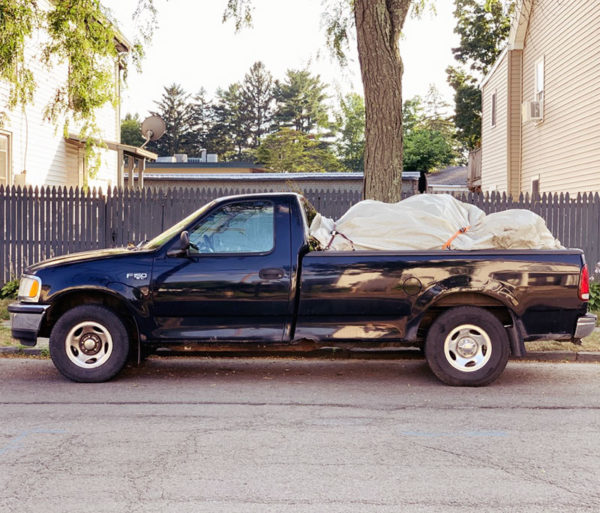 AND GOD BLESS THIS TRUCK. OK, so I ended up with a Ford F-150, which is bigger than I was thinking. It has a “regular cab” (2 seats) and an “extended bed” (about 8′ in the back) and it RULES. It has a little less than 100,000 miles on it, and it hails from the distant past of 1997. I think the kids call that vintage! It smells like an ashtray, has no fabric remaining on the ceiling, and has neither a CD player NOR a cassette player—radio only. The windows crank down with a handle and the A/C doesn’t seem to work and it has shitty gas mileage and manual locks and needs new brakes and eventually new tires and it’s MAYBE the best $1,200 I’ve ever spent.

I love it so much. I’m using it constantly. It takes the complication and headache out of SO MANY THINGS—getting trash to the dump, disposing of brush, hauling lumber and gravel and mulch and concrete and furniture and a pile of beautiful antique doors a flipper ripped out of an old house and left on the side of the road. I feel…I don’t know, empowered? to take on big projects and get some major shit done. It might seem silly but honestly every time I get into it I just feel giddy and grateful that it’s now a part of my life. Maybe I am a car person, after all.

Nah. But I love my beater pick-up and I can’t want to show you what we’ve been up to!

**Addendum: do yourself a favor and don’t buy a car in this manner. Get it looked at by a mechanic first, pay for the CarFax report, maybe even drive more than one before committing. Listen to your mom. 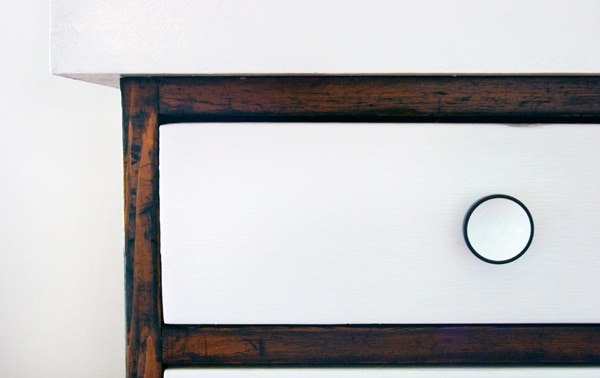 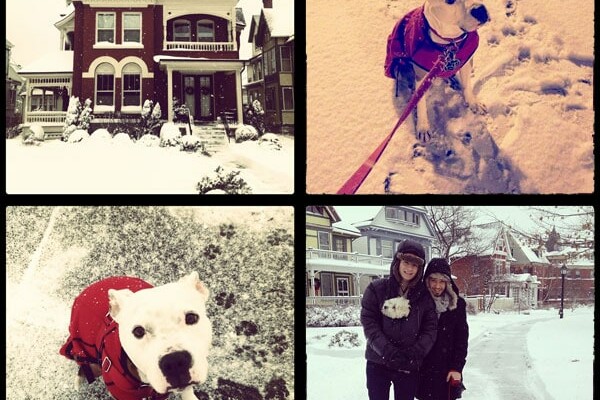 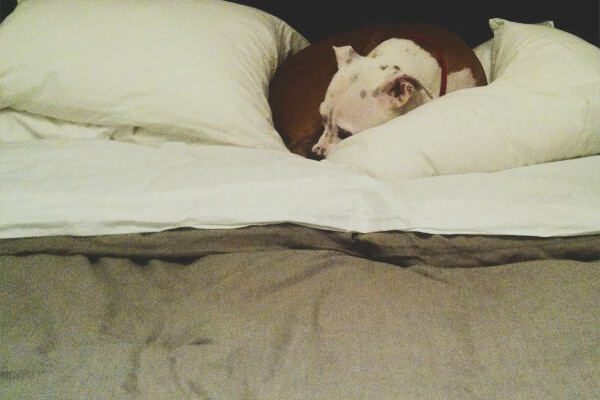