In over a decade of writing this blog, I’m pretty certain we’ve never entered this territory: GUEST AUTHOR TERRITORY. But I’m making an exception for my friend/quarantine-roommate/wife/mother/sister/yogi/dedicated follower of Christ, Juliet. After like 8 weeks of basically single-handedly keeping me fed, I would say she’s earned the right to share her own recipe with you. This one’s a personal favorite of mine and has been requested a bunch over on my second home, Instagram. It’s flavorful, quick to throw together, and utterly delicious.

Take it away, Juliet! You’re a natural. 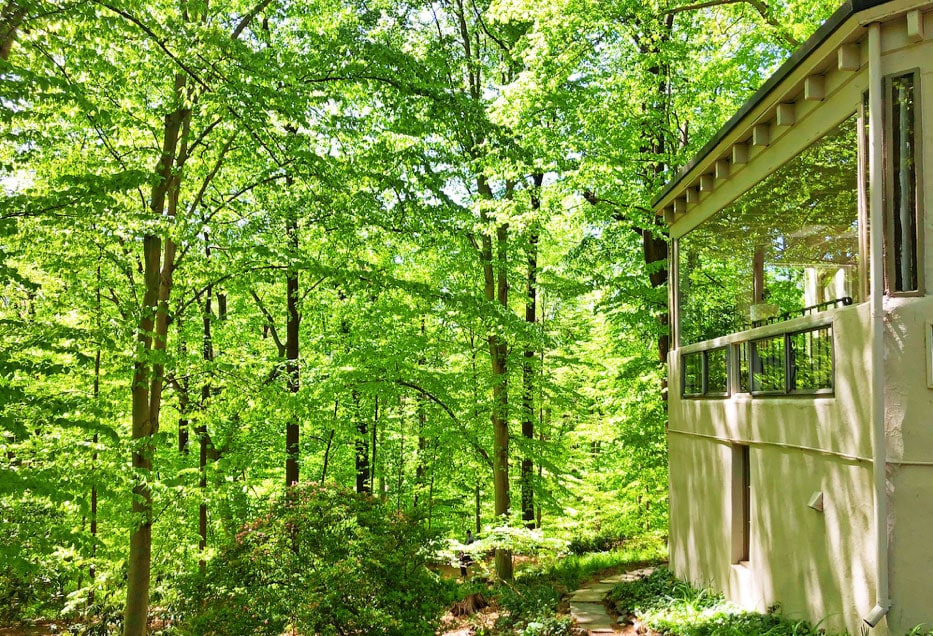 This clam spaghetti is not, in fact, one of my grandmother’s recipes. Grammy — my father’s mother — was rightfully regarded the great cook of the family. Hailing from Catonsville, Maryland, near the Chesapeake Bay, Grammy had a gift for seafood; less geographically clear were the origins of her vaguely British accent, highbrow sensibilities, and haughty demeanor.

Don’t get me wrong — Grammy adored her grandchildren, and we adored her back. She hosted the most fabulous holiday parties in her Washington, D.C. home, serving crab imperial, oyster stew, and fried scallops alongside the more traditional dishes. At Easter, the adults would eat a honey-baked ham appetizer with homemade biscuits while the kids tumbled through the woodsy backyard hunting for eggs. Her Thanksgiving pecan pie was a bourbon-laced dream. She also had a knack for cucumbers, from her homemade sweet pickles — so dark in marinade they were brownish-black — to a light, vinegar-y cucumber salad loaded with dill.

But I’m ashamed to report that I didn’t learned to cook from her. My parents, enlightened professionals of the 80’s and 90’s, didn’t consider it essential for a daughter to get some mileage in the kitchen before she reached adulthood. And by the time I finished high school, Grammy was declining mentally and physically, her characteristic grandeur giving way to maudlin episodes and, oddly enough, a fixation with eliminating salt from her diet. (Maudlin episodes and odd fixations”¦who can relate?)

Still, I remember her with fondness and awe. Presiding over the stove, Tosca blaring through the speakers, she’d throw ingredients into pots with apparent abandon while vocally disapproving of someone definitely within earshot. And somehow, out of this tumult, a magnificent meal would emerge.

So, this clam spaghetti, while not a recipe of my grandmother’s, is something I try to approach with my grandmother’s spirit. The pasta finishes cooking in the clam sauce, thickening in the liquid from the clams — the shellfish “liquor,” as Grammy used to call it. The dish gets its kick from a generous serving of famous Maryland spice blend Old Bay. (If you live on the East Coast, you have no excuse for not having Old Bay in your pantry. It’s as delicious on popcorn as it is on steamed blue crabs.) If there’s no Old Bay in grocery stores near you, it’s easy enough to order. And I promise you that you’re likely to have the rest of the ingredients on hand already, even in quarantine.

Now put on some magnanimous music, lash out at your spouse, and pour the wine straight from bottle into skillet. Grammy didn’t measure. 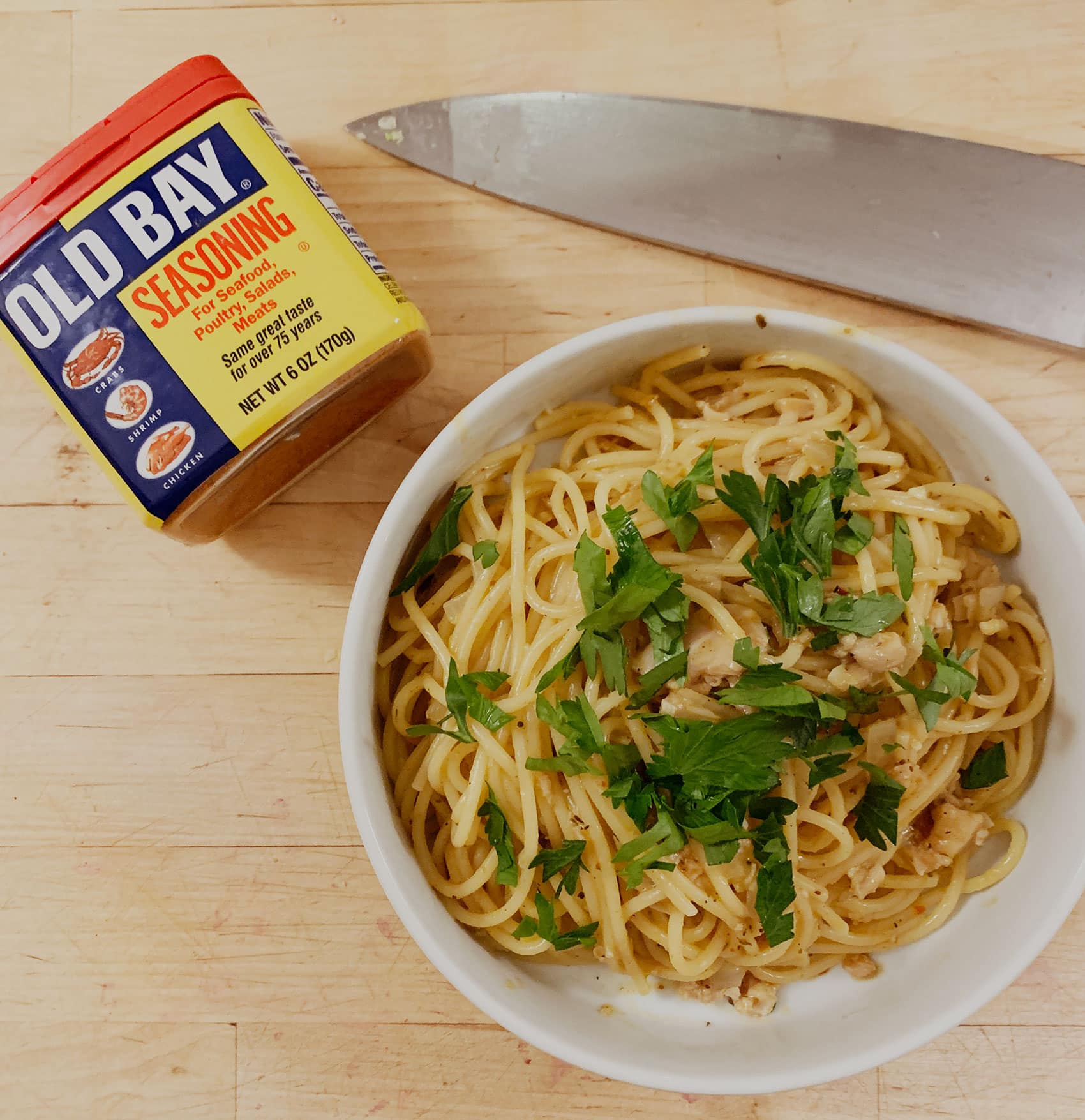 1. Bring a large pot of salted water to a boil.

2. Once water is boiling, heat butter and olive oil over medium-high in a large skillet. Add onion and sauté for 1-2 minutes, until just starting to look translucent.

4. To the skillet, add garlic, red pepper, thyme sprigs, Old Bay, and black pepper (no need for salt here — the clams are salty enough that you’ll want to wait till the end to decide whether you want more salt); cook for 2 more minutes until fragrant. Stir in lemon juice and white wine. Add chopped clams with all their liquid to the pan and bring to a boil.

5. Lower skillet heat to medium. Using tongs, transfer the pasta directly from the pot of water — don’t pour out the water! — into the clam sauce. Add a cup of the starchy pasta water to the skillet and toss pasta in the sauce. Add more pasta water if needed and continue to toss; the sauce will thicken and stick to the pasta as the pasta absorbs the clam flavor. After 4-5 minutes, the pasta will be done. 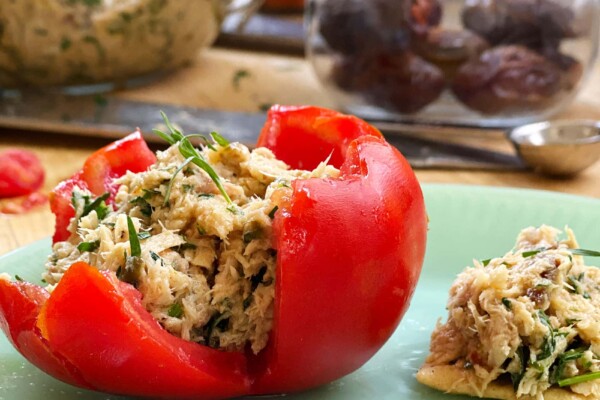 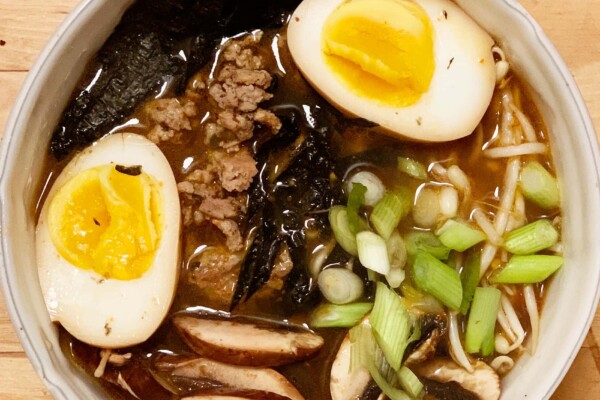