One of the adorable things about my friend Chandler is that the idea of living alone makes her generally apprehensive. Though I’m unclear on exactly what bothers her about the scenario, it doesn’t seem to be a fear of loneliness or some scary sense of isolation. She doesn’t concern herself with fantasies of, say, preparing a crudité platter when suddenly the knife slips, she accidentally severs all ten of her fingers, is unable to dial the phone for an ambulance, and perishes alone on the kitchen floor. Well, at least she didn’t before I wrote that.

More than anything, living alone seems, to Chandler, to come with a renewed set of security risks. While a criminal might enter a home occupied by any number of people, something about quivering in fear on the floor of your closet is just so much less intimidating when you’re accompanied by a friend or family member. There is safety in numbers, especially ones bigger than 1.

So we needed to beef up security before I left. We installed a motion-activated light outside. We frosted some windows. We left the yard a janky disaster area so nobody would suspect that the inside held anything worth stealing. But we needed more. We considered buying a Guard Duck, but eventually decided that it might freak out the neighbors. What we needed was something on the inside— a beast so magnificently terrifying, so thoroughly menacing, and uncompromisingly vicious that it could ward off all evil spirits, living or dead. 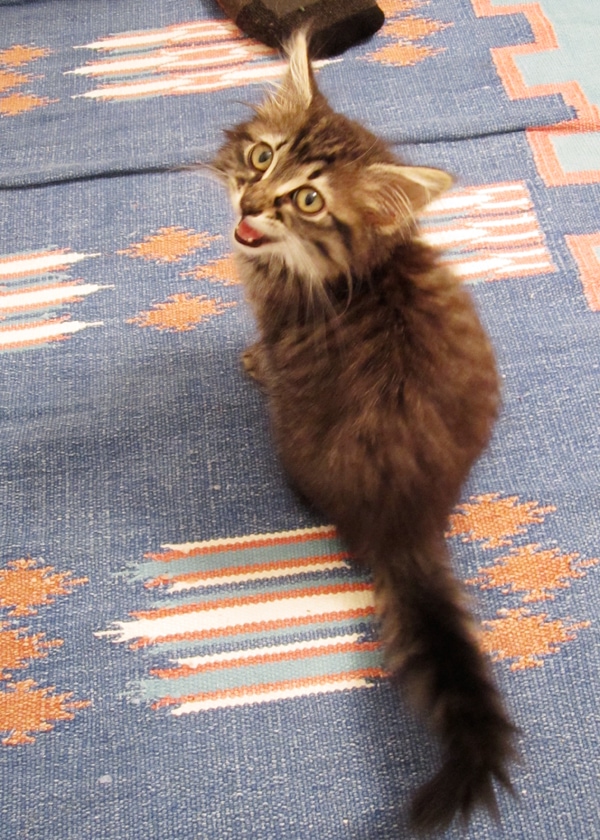 To get a sense of just how enormous this monster is, check her out next to that drill: 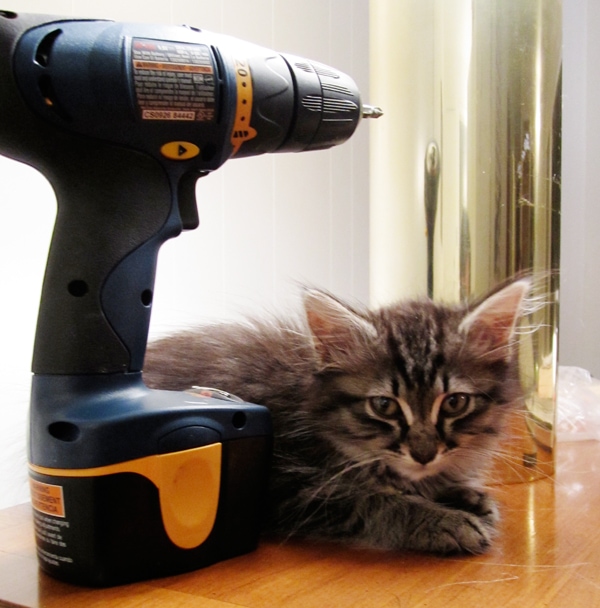 And get this. She’s only four months old. Terrifying.

While she’s not on duty guarding Chandler’s fortress, which in reality is 100% of always, she moonlights as an adorable, completely darling kitten. She enjoys playing and falling asleep stretched out on her back in your arms. Her hobbies include cuddling up and sleeping next to you in the middle of the night, purring, and begging shamelessly for food. You guys, she’s the cutest.

Aside from bringing home Winny, we got as close to finishing the living room as we were able to get. One of the things about only having 13 days in an apartment is that not everything gets quite finished, obviously. But I think this is a good start. 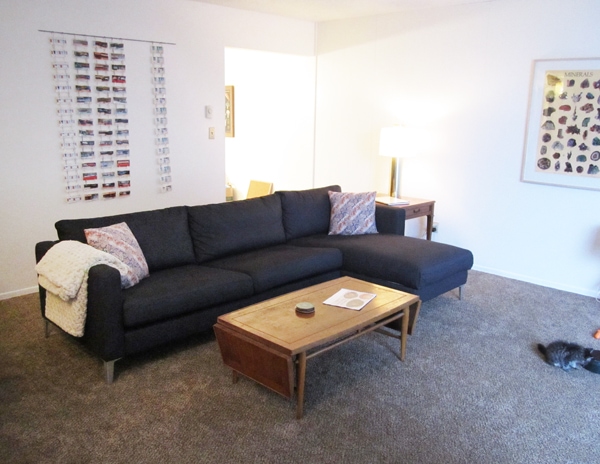 Here’s the view from the front door. Originally we put the couch against the paneled wall (the one with the framed poster on it), but I moved it out here when I was painting the trim and we liked the layout better this way. Plus, putting furniture too close to walls in Portland is a problem because mold can grow, so it’s better this way. 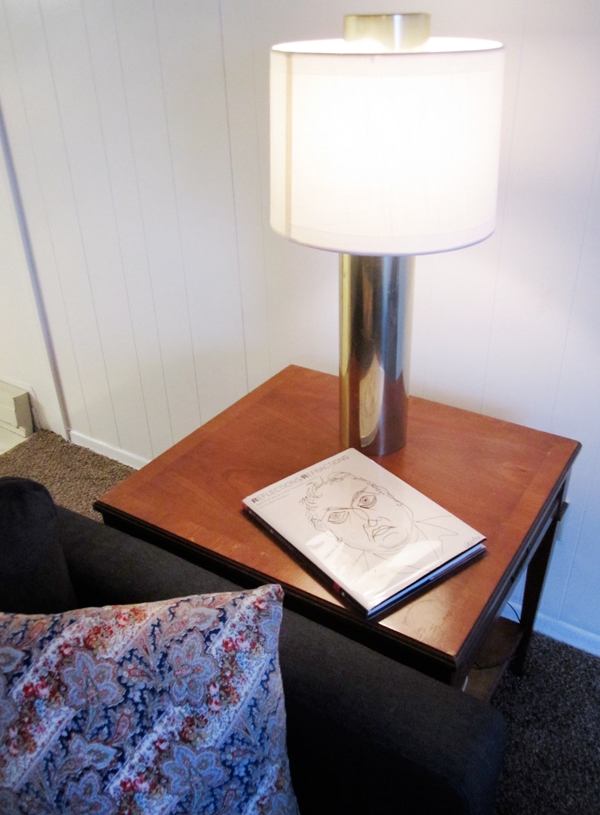 I really love that brass touch lamp. And look! I made pillows out of that table cloth, and I think they came out pretty cute and girly and whatnot. Tasteful floral. 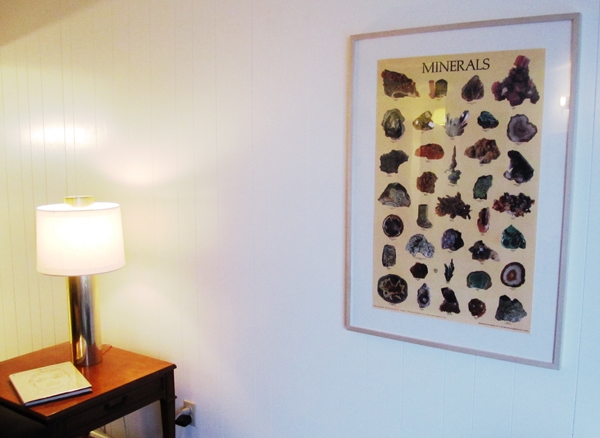 Chandler bought this fun and informative Minerals poster on Amazon. It’s in a RIBBA frame from IKEA, double-stick taped to the matte. 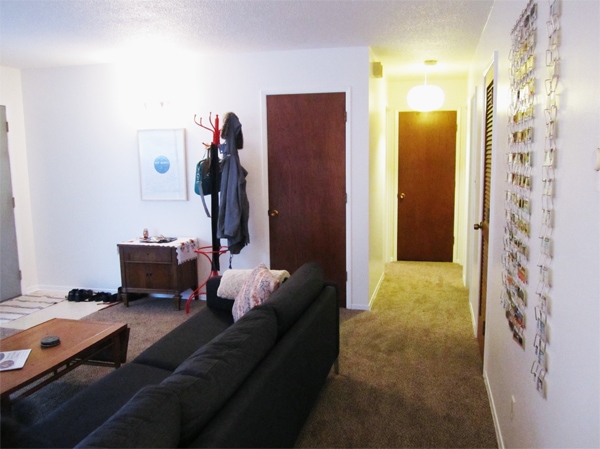 This is the view from the kitchen door. I think the way the couch divides the spaces and sort of defines and elongates the hallway is nice, and it made a perfect little gallery wall for Chandler’s awesome art. 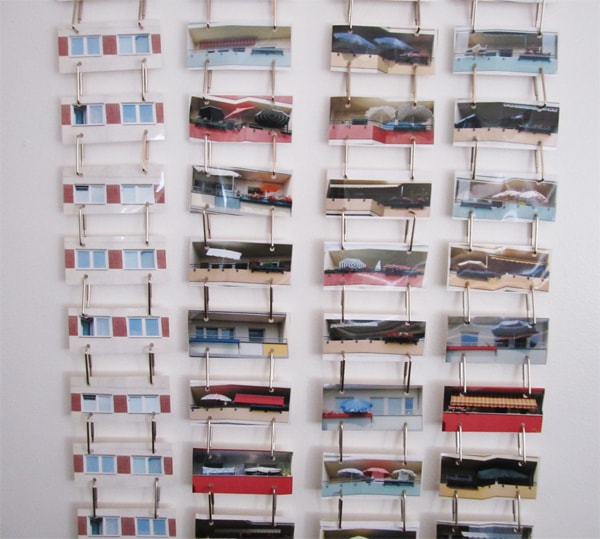 Cool, right? Chandler went to Berlin over the summer and made this fantastic photo project using pictures of various balconies on apartment buildings around the city. They’re strung together using these little key rings that we could only find at Home Depot, and obviously she needed about a million to put it all together, so it’s not quite finished in these photos. I think she cleaned out the supply of about six different Home Depots and is still on the prowl for more (read: if you’re in Portland and you were hoping to purchase one of these shiny little key rings, good fucking luck). Anyway, it’s going to look amazing when it’s all complete. 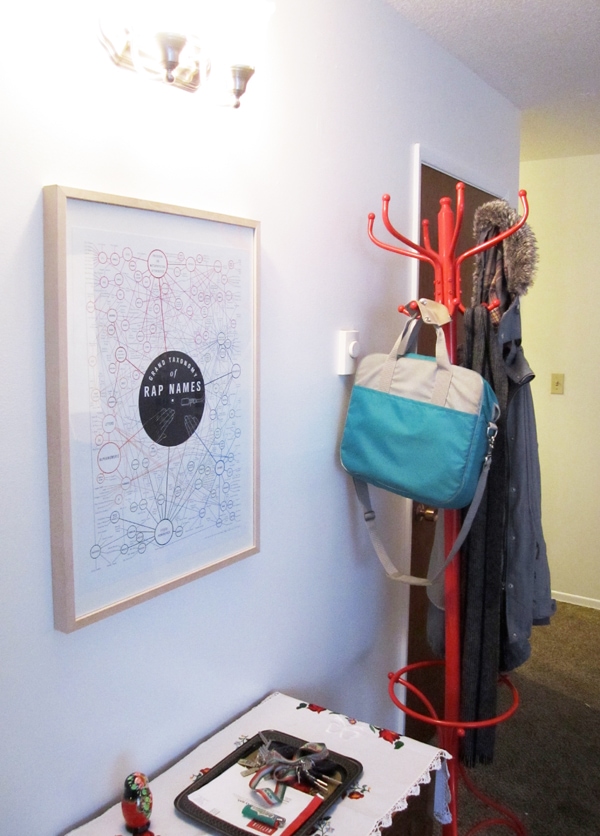 After Anna at Door Sixteen posted these pictures of her beautiful hallway, I had to get Chandler the Grand Taxonomy of Rap Names poster from Pop Chart Lab as a house-warming present (also in a RIBBA frame). She nearly died when she saw it and decided to hang it in the entryway. One thing we didn’t get around to was replacing that awful light fixture (there’s a better view here), but we ordered a new one online that will be a massive improvement. I’ll snap a picture next time I’m in Portland when we do our reunion episode. 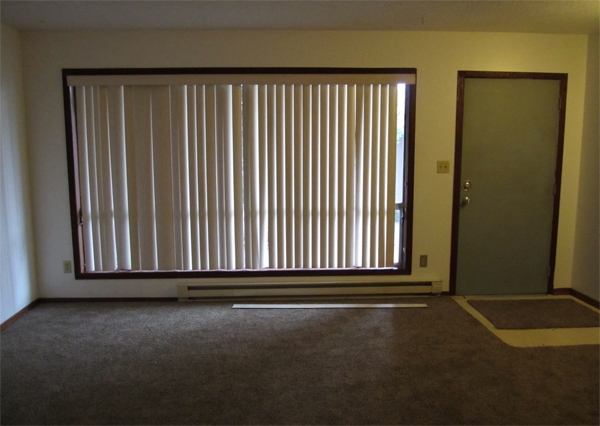 And O to the M-G remember those vertical blinds of yore? I couldn’t WAIT to rip them down, but Chandler finally let me (even though the new curtains, also ordered online, haven’t arrived yet) so I could paint the trim. 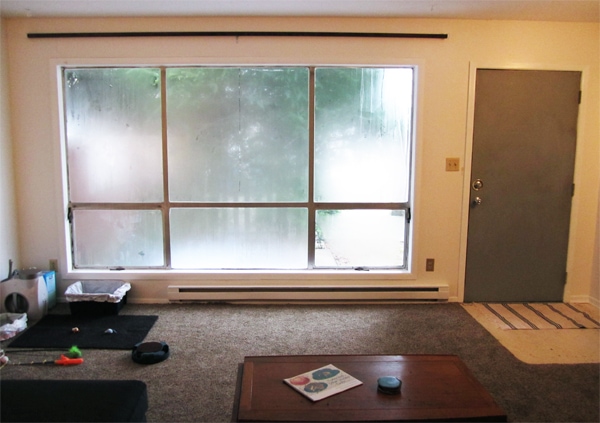 Excuse the crazy Portland window fog (nope, we didn’t frost those… I think somebody just took a shower), but the trim is painted and the curtain rod is hung! We thought about painting the door, too, but we never got around to it. Maybe next time!

Now, figuring out a curtain rod for a window that big was no easy feat. The window itself is about 10.5 feet wide, so the curtain rod had to be about 11.5 feet to allow for a little overhang on each side. Standard curtain rods just aren’t made that large, and ordering one would have been, like, hella expensive. So we went to Home Depot and got this wood dowel cut to size: 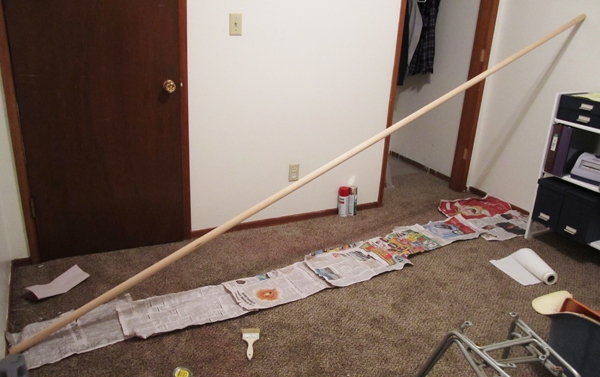 Then I stained it with Minwax’s Walnut stain. To hang it, we fashioned these little brackets using closet rod supports, a screw, a washer, a nut, and a 2″ L-bracket. Boy, figuring that out in Home Depot was a good time. 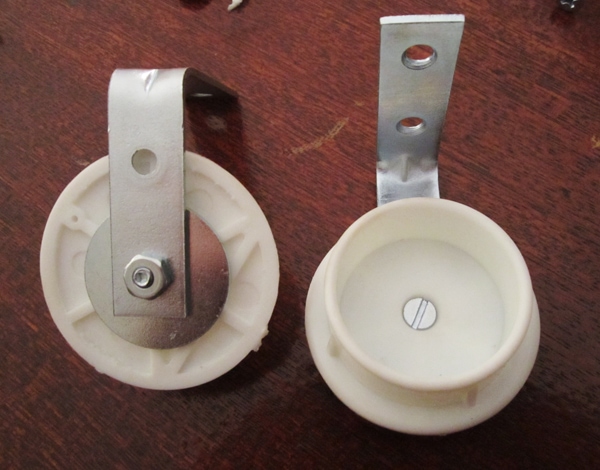 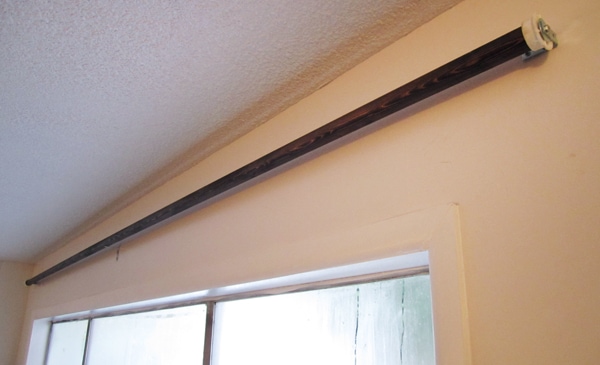 It’s not the most glamorous solution in the world, but it works and the whole thing was less than $20. I think maybe if the brackets were painted black they wouldn’t be as odd looking, but the ends would still be ugly. Any ideas? 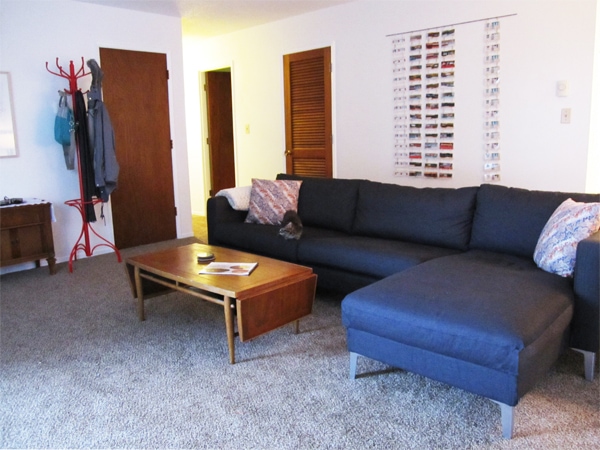 I think someday it would be nice to switch the chaise add-on unit to the other side of the couch and put a lounge chair in the corner this picture is taken from (the left side of the window, where all the kitty stuff is now), which would further define the living room a bit and create more seating (because who can have enough places to plant themselves?). We didn’t come across any good options while out thrifting, though, so that’s another thing that might happen in time.

When the time does come, though, we bought this brass lamp for a few dollars to sit on a side table next to future-lounge-chair and spray painted it red. I think it came out cute, so I figured I’d share even though it’s just sitting around for now. The shade is from Target. 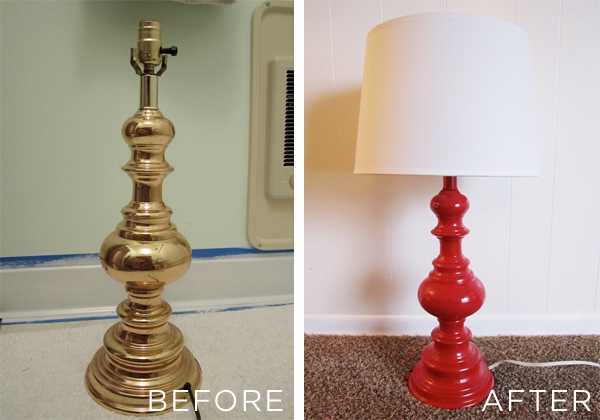 So there it is, the living room. As done as it gets for now.

Phew, still there? One more kitty picture? Okay. I’ll give you two. 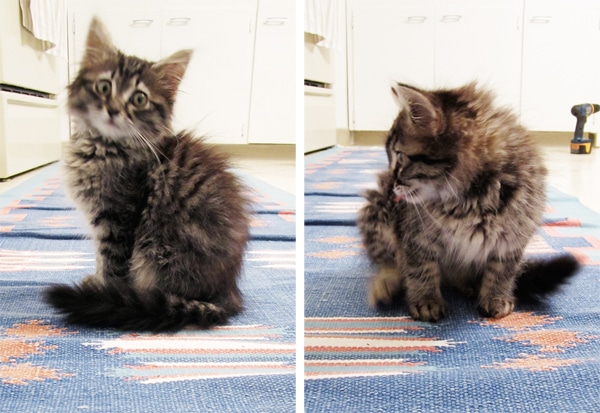 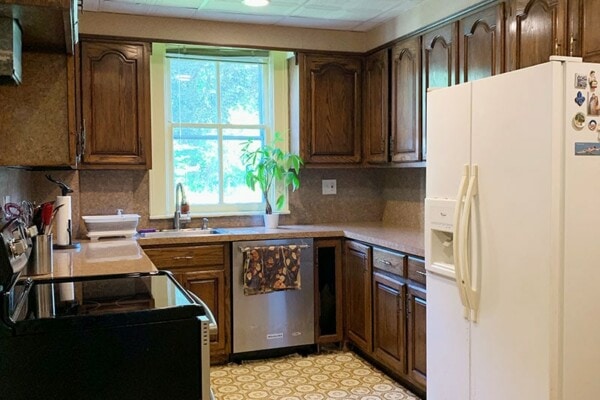 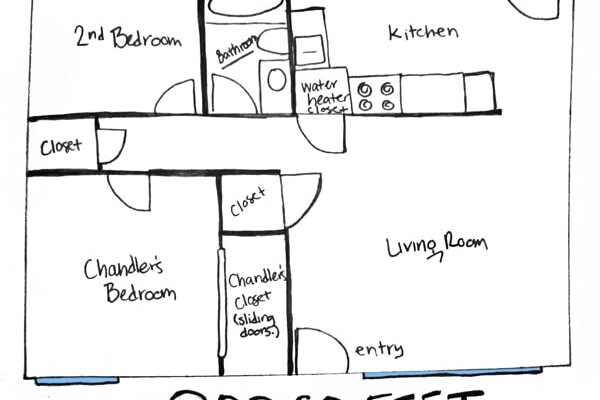 Portland Day 2: The Apartment, Before 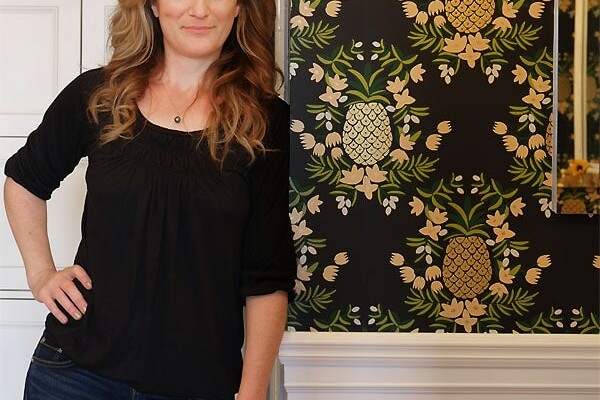