The new school year is in full swing, and I basically went into this semester with two glaring goals that I think are semi-related, if you squint hard enough:

2. Don’t look such a dumpy mess all the time.

I don’t think I’ve ever been a particularly bad student, but that depends on how you want to look at things. When I was a freshman, I came in from my year working in Canada refreshed, inspired, and ready to go. I rocked freshman year. I lived on campus, so getting to class wasn’t an issue, and frankly, I didn’t have a whole lot of other things going on in my life. I dressed well everyday (well being a term I use liberally, but I thought I looked great in my button-down/tie/tie-clip/cardigan uniform), I recall starting most of my work well in advance of its due date, I had good relationships with my professors, and I got good grades. Essentially, I was making college my bitch and it felt good.

Then sophomore year I moved uptown, and with the distance and an admittedly rocky living situation, I slipped a little. I still did fine academically, but I started to develop worse and worse habits (regular coffee and Red Bull-fueled all-nighters, for starters), and I started to feel totally uninspired by school. The classes were OK, but NYU isn’t exactly the sort of place where students can expect to be surrounded by other super-motivated, super-prepared students who hold themselves to a particularly high academic standard. That was also around the time that people started reading this here blog, and I’ll admit that that was not only a time-suck, but a huge distraction.

The second half of sophomore year I spent still living uptown, and while I usually regard living alone to be a good thing, there were definitely rough patches of loneliness and depression and more bad habits and just generally feeling really anxious, really depressed, really out of control, and like a really, really, really shitty student. Most of that fairly short but spectacularly crappy period came to a halt pretty suddenly when I up and decided I was going to fall in love. So while I was in a better place mentally, I had a really hard time juggling school, this site, and a budding new relationship that moved really fast. I think I honestly had a hard time understanding why my professors were expecting me to get all this shit done while I was in the midst of also trying to woo my new boyfriend into thinking I wasn’t a total disaster. Didn’t they realize I had better things to do? Miraculously, I skirted by once again with pretty good grades, but I’m not the sort of person who is particularly motivated by letters and numbers on a report card. Particularly when I feel like I’ve done the bare minimum to earn them.

And then there was last year. I’d moved to Brooklyn, Max had moved in, I started a new job at school, I still had the blog, and my classes were a mixed bag of stuff I really wanted to take and stuff I felt like I should take but wasn’t terribly enthusiastic about. I wanted to be better, but I’ll be honest—it was hard. The early months of cohabitation are difficult and confusing enough on their own, but combined with having to write essays about LEED-certified skyscrapers or whatever, trying to turn a pretty run-down apartment into something nice, and learning the ropes of a new job? I tried to keep school front and center, but I found it often taking a backseat. I generously took advantage of deadline extensions, and sometimes even extensions of my deadline extensions. Miraculously, my grades were fine, again, but with each passing semester, I felt like more and more of a fraud as a student. And I hated feeling that way.

And then last semester happened. The one where we got a dog at the beginning, and then at the very end, found a second one. Dogs are great, and I’ll never regret either of those decisions for a minute, but all of a sudden there was another thing to negotiate. Except this one didn’t grudgingly give extensions or allow itself to have a low rank on my list of priorities. It was amazing and terrifying at once, and coupled with more classes I really didn’t care about with students who also really didn’t care, last semester certainly wasn’t any easier. I pulled off good grades again, but felt just as crappy as if I hadn’t. Same story, different circumstances.

I’m tired of that. I’m ready to not do that anymore. I feel as though my life has stabilized a lot over the past few months, and I’ve gotten much more fluent at negotiating the responsibilities I have, appreciating how long it takes me to actually complete tasks, and planning accordingly. I’m not going to lie and say I’m some perfect human who’s managed to make my life run like clockwork (far from it). But the point is, I’m ready let go of some of that feeling of OMG I’M A FAILURE I’ve had in the past and just be better and see where it takes me. I’m at a place where I don’t give a shit what other students around me are doing or how they’re acting—I just want to be engaged, prepared, and do my best. Which, thus far, I’m fairly certain has established my role as the most annoying person in the class, and I fucking love it.  That’s never really been me before, so it’s a fun thing to try out.

Which brings me back to clothes, because why not? I tried to think back honestly to what I did moderately well as a freshman (or at least attempted to do moderately well), and aside from staying organized and making lists constantly and being a more engaged and prepared student, one of those things was not going to class (or anywhere else) like I just crawled out of a crypt.

Now, I will never claim to be a particularly stylish person. But a good friend recently told me that instead of thinking of myself as a body with a face (neither of which I can really do much to change), maybe I should look at myself instead as a design object. I like that a lot.

I am a small guy. I’m only about 5’7″, I weigh about a buck 20, and sometimes even a men’s size 7 shoe is too big. If I were a room, that room would probably be small and awkward and couldn’t exactly rely on its architecture to look put together. That room would need to be particularly careful, otherwise it would look a damn mess. And the temptation with rooms like that is definitely to not give a shit them at all and do the bare minimum with the cheapest materials possible to make it look OK enough instead of even trying to turn it into something kind of nice. That’s basically how I’ve been approaching dressing myself.

What I’m trying to say is, I actually like clothes, but the combo of being too poor to buy them and too small for them to fit 99% of the time makes the act of actually dressing myself essentially an extended exercise in disappointment and despair. So, as a first step of being a better student and more competent person is, again, to not do that anymore. 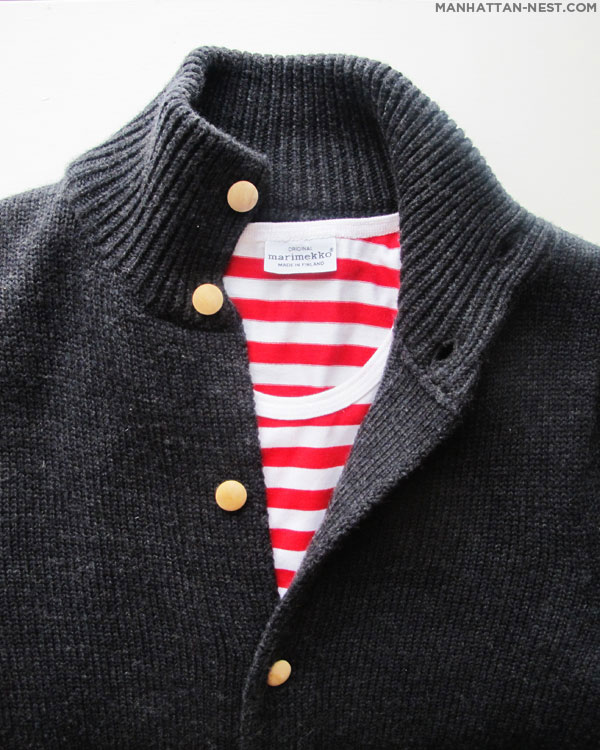 A good first step to that, I think, is splurging (or not splurging—more power to you!) on one versatile item that will last a long time, can be worn throughout most of the year, and has zero qualities you dislike about it. For me, that’s this cardigan I picked up this weekend at Steven Alan. With the soft charcoal grey wool and PERFECT raw wood buttons, it’s officially my favorite article of clothing. I don’t mind wearing basically the same thing everyday, which is convenient because I’ll probably be wearing this everyday until June. Maybe July.

The great thing about neutral cardigans is that you have a lot of options for what goes underneath, from t-shirts to button-downs. Today I’m wearing my red and white striped Marimekko shirt I bought in Finland underneath, which is nice since I’ve decided I can’t take myself seriously wearing it alone since I’m always waiting for the “I found Waldo!” joke.

I tried to take pictures of myself with this clothing on my body, by the way, but I’m not quite ready for that. I need to work on my apathy-face and what to do with my legs/arms/hands. 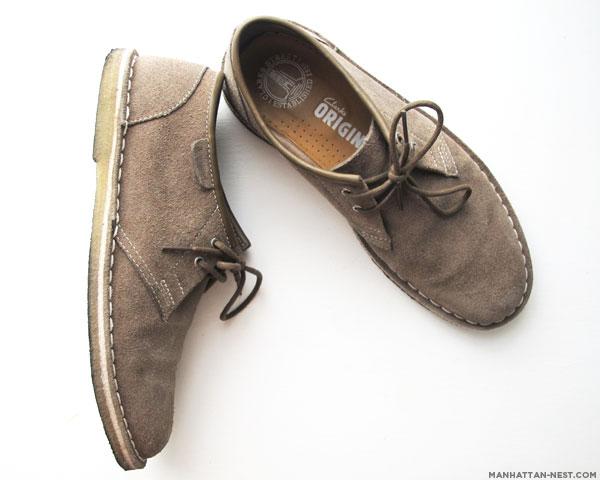 Also, I BOUGHT REAL SHOES. This is the part where I confess that I have basically worn Chuck Taylor’s, more or less nonstop, since 2005. I’ve been trying for years to find a good pair of everyday shoes that aren’t sneakers, but I always come up dry and just buy another pair of Chucks (or, this summer, when I was feeling adventurous, I bought a pair of Jack Purcell’s instead). Every single time I like a good-looking pair of shoes in a store, they either don’t come in my size (many men’s shoe companies cut off at size 8), are sold out, or look completely absurd on my body. I swear, my feet/legs do something to shoes that is supremely unflattering to both. So I finally gave in and joined the impressive ranks of Brooklyn-dwelling hipsters who wear Clarks Originals (the “Jink” style, in a color I can’t find on their website), and so far I’m down with these shoes. They’re comfy and make me look less like a child, despite that they’re super low and definitely don’t do me any favors in the height department. 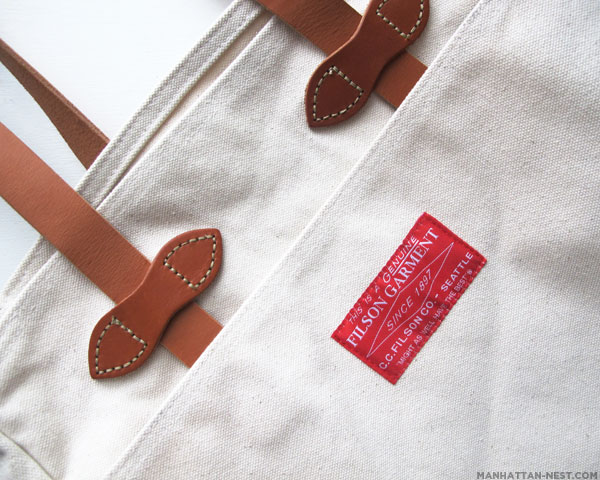 I keep looking for a good bag, and I’m really into this Filson tote (I think it’s this one, but I guess I got it on sale and I don’t see this color on the website…). It’s big enough to hold everything I need to bring to school and back, but not so big that I feel stupid carrying it places where I don’t need as much stuff. Filson bags also have a lifetime warranty, so even though it wasn’t too much money, I do feel like I’ve invested in a quality item instead of another mediocre thing from Salvation Army or Urban Outfitters. Man bag? Murse? Do I care? I am gay and I live in Brooklyn, of course I do not care. 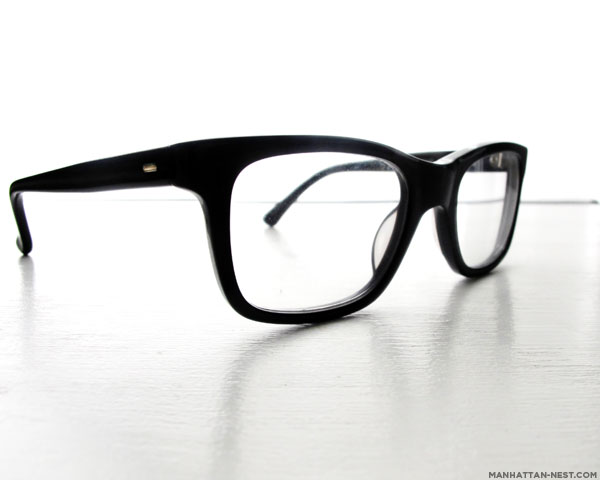 And I kind of started to wear glasses. Sometimes. I do actually have a prescription for distance, albeit a fairly weak one, so for me glasses are something akin to high definition TV versus standard. More importantly, they accomplish what we all wanted in elementary school but swore up and down we didn’t want: to look smarter/cooler or whatever. Something about putting on a pair of thick-framed glasses signals to my brain both that I have one, and that I’m ready to use it. Also, I think they look pretty good on my face, which never happens since my face is, unsurprisingly, very small.

So yes, aside from the part where they give me superhuman vision, they’re 100% stupid and I love them.

I already know this year will be full of new challenges and new anxieties and a ton of hard work, but something very small and very superficial about clothes is making me feel a little more prepared to take them all on.

Here’s an awkward photo taken of me yesterday wearing 2 of the 5 items mentioned in this post. That’s the best I got, for those who need the full visual. (+ cute dog) 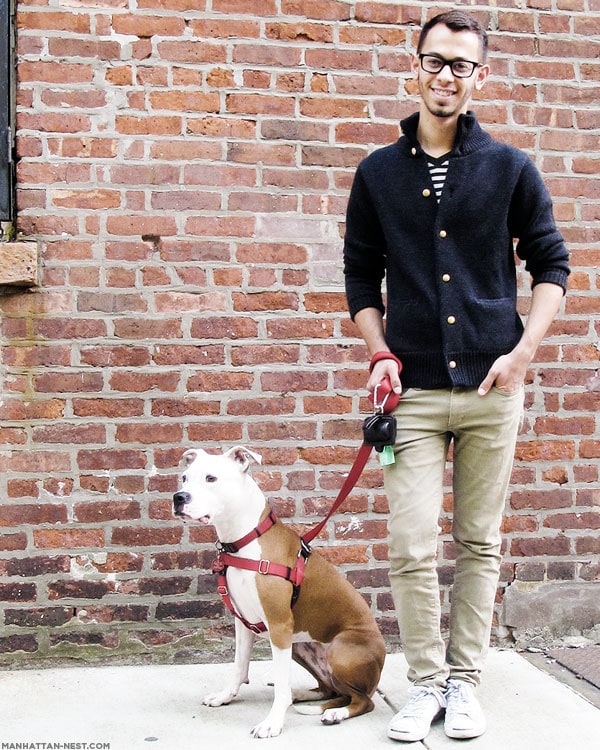