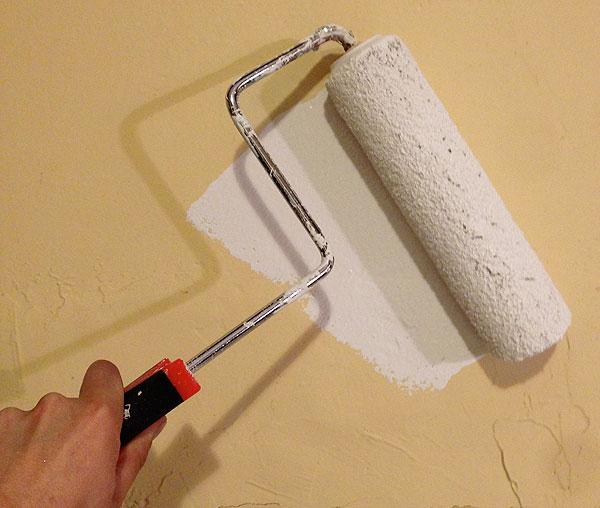 I used to think painting was the worst thing in the world. I was OK with the part that came before——spackling a few holes, a little sanding, maybe cleaning the walls a little——and I liked the part that came after, when the room was painted. But the actual process of painting——the endless cutting-in, the rolling, the paint drips and splatters and going to sleep with dried paint in my hair and under my finger nails——those were all things I dreaded.

But by the time I finally filled all the holes with patching compound and filled the gaps with caulk and de-greased and de-caulked and got through all the prep work in my kitchen, painting kind of felt like fun arts-n-crafts time? Like a nice way to kick back and relax? Maybe I actually like painting? Maybe I’m going through a very confusing identity crisis? Maybe my whole perception of reality has been irrevocably altered? 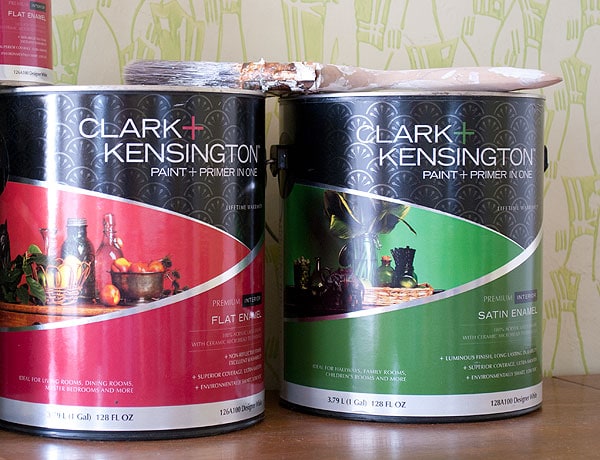 If you’ve read my blog for a while, you might have noticed that I’m a very firm believer in buying good paint, which for me has always meant Benjamin Moore. It’s what my mom always used in our house growing up, and it’s what I’ve always used by myself, save for once making the enormous mistake of using really cheap paint at a friend’s house and discovering sometime around my 4th or 5th coat that quality really does make a huge difference when it comes to coverage, adhesion, durability, and the final result looking good. From then on, I just accepted that my future would be composed of $40-$50 gallons of paint, and that was that. That’s more or less OK when you’re looking at a small apartment with a landlord willing to cover $20/gallon, but it sort of blows when you’re looking at a whole house of walls, doors, and moldings literally begging and pleading to be repaired and freshly painted.

So, when Ace Hardware offered to let me try out their new-ish brand of paint and primer in one, Clark + Kensington, I decided to take the chance. I warned them that my allegiance was elsewhere, and that it’s my policy to always give honest reviews and they’d have to be as OK with me not liking the paint as they were sure that I would, and they agreed. So confident. So sure of themselves.

Real talk: this paint is dope. I was really expecting it to be pretty mediocre, but I found it to be pretty much on-par with the Aura line of Benjamin Moore paints——which is quite an endorsement, because that’s some fancy paint—— except about $30 per gallon instead of over $60. This is hard for me to say, but…I think I’m converted!

The paint can also be color-matched to several different brands (including Benjamin Moore and Farrow & Ball), but I wanted to check out the Clark + Kensington colors for myself! And by colors, I mean various shades of black and white. You know how I do. 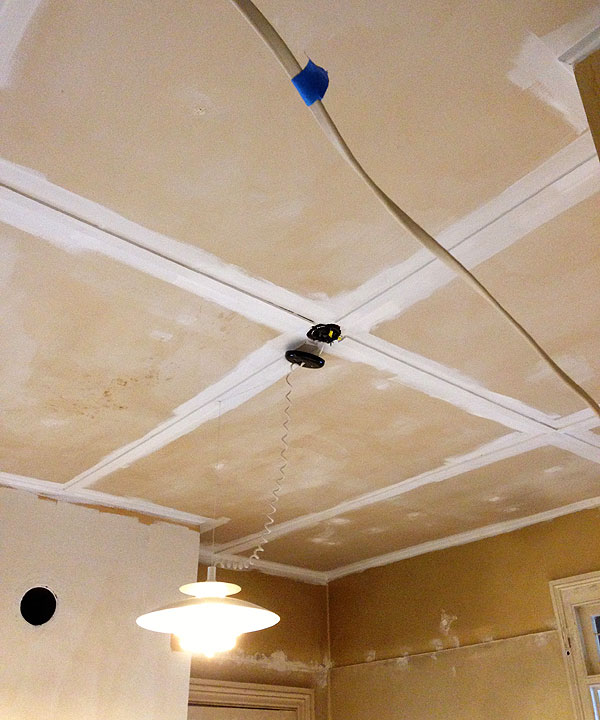 As usual, I started by cutting in the ceiling. This was a massive pain in the tuchus because the seams in the sheetrock on the ceiling are covered in those thin wooden strips rather than taped and mudded, so all of that needed to be painted by hand. I used a regular roller for the panels in between.

Check out how gross that ceiling is. It is the most gross. 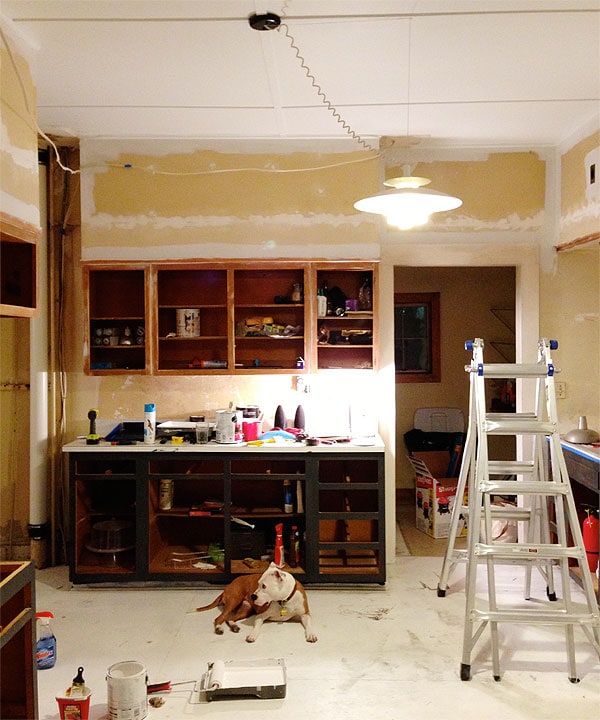 With the ceiling all painted with two coats of Designer White in Flat Enamel (which is a pre-mixed off-the-shelf white, which I’m using on the moldings and upper cabinets, too), we started in on the walls and cabinets! I’ll save the cabinet painting for another post, but this was about the stage when I started to get really excited about the kitchen. It was also a period of sort of non-stop marathon crazy work in here, which is why this photo was taken at like 2 in the morning and everything is a total disaster.

I stayed up super late painting, and in the morning…. 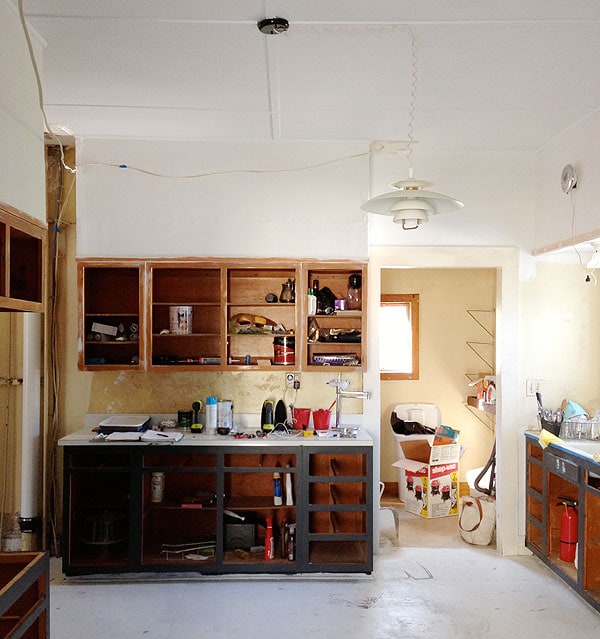 There really is nothing better than fresh paint.

I know this picture might not look like much since obviously the doors and moldings still need to be painted, and I didn’t paint the backsplashes, but getting the walls over with was an incredible feeling. I used a color called Casablanca on the walls, which is an extremely pale grey. Obviously it reads as very white, but it’s different enough from the ceiling and molding to give the room a little more dimension than if everything was the same shade. 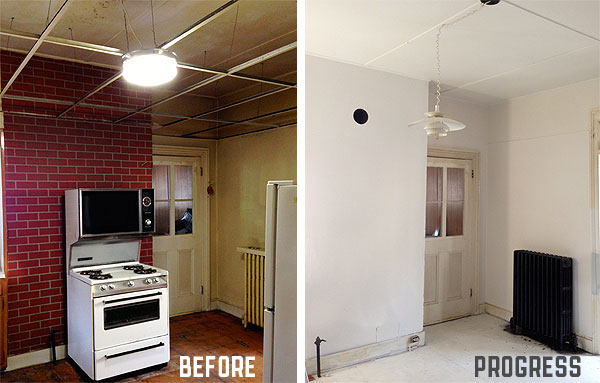 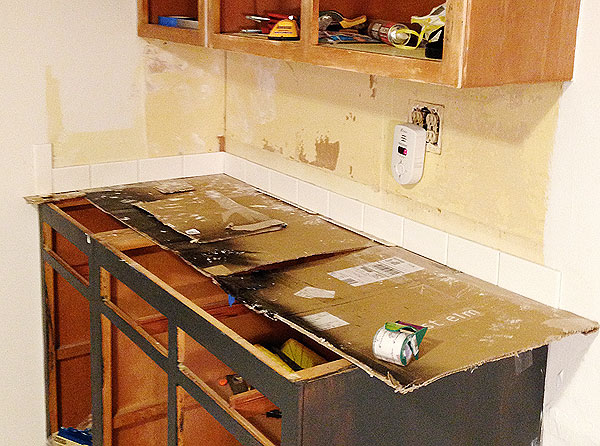 That night, my friend Nora and I also put in the first row of tiles! Sorry about the horrendous nighttime iPhone shots. These are just plain old American Olean white 3×6 subway tiles from Lowes, which are super cheap at about $.22/tile. I know it might seem silly to install tile backsplashes in a kitchen that we aren’t planning to keep forever, but I already had the thinset and black grout from tiling my kitchen in the apartment, so for about $100 for all of the tile, it seemed like a really worthwhile aesthetic and functional upgrade to just go for it. Also, Nora wanted to learn to tile, and I believe in being a gracious host by making my friends work super hard until the wee hours of the morning in July with no A/C in exchange for letting them sleep on a shitty air mattress and cook for me. That’s just manners.

Since I just did a whole tutorial on tiling backsplashes (here and here), it didn’t seem necessary to rehash the whole process again, especially since I would have done a few things differently if it needed to last forever. Obviously, I didn’t paint the backsplashes or really prep them at all first (in a perfect world, I wouldn’t be using drywall as backing at all!), and I barely planned out how the tile would run before just slapping them on the walls. And yes, I used cardboard and stir sticks to hold up my first row instead of something more rigid and precise. And yes, I started the tiles at the top edge of the base cabinets, not the countertops, because with the height of the upper cabinets, this was the best way to cover the most surface area of the backsplashes with tile without having a huge weird gap at the top, if that makes sense. So yeah. It’s not perfect, but it’s still going to look totally fine when everything is done. “Totally fine” is kind of this room’s guiding principle, lest you haven’t noticed. 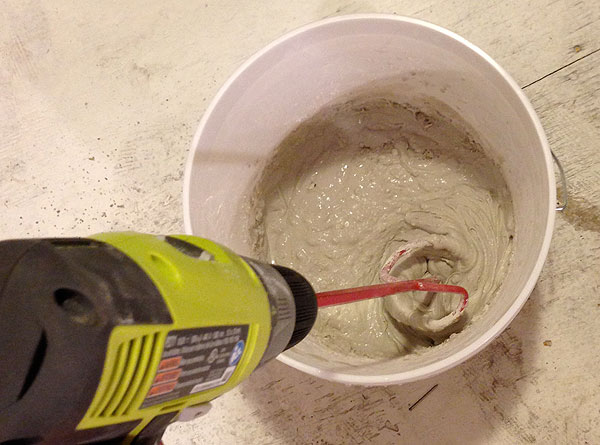 I’m just including this picture because I got smart and bought myself a stirring attachment for my drill to mix the thinset and grout. CHANGED. MY. LIFE. Stirring thinset with a paint stick or a spoon or whatever is really difficult and tiring (you’re supposed to mix for 5 minutes, let it sit, then mix it again for 5 more minutes), and this handy attachment just takes all of that work away. FYI. 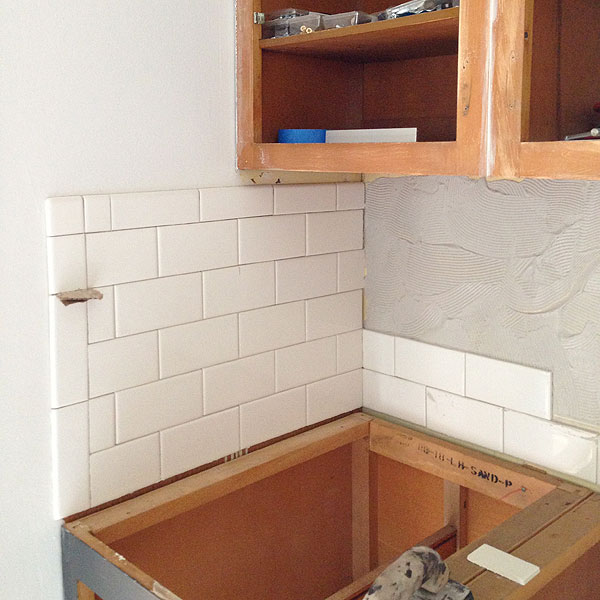 The next day, after the bottom row had time to harden up, we mixed up more thinset and got back to work! I really should have planned this so that the end of the run (where it meets the vertical trim pieces, not the corner) would be composed of full and half-tiles instead of these weird in-between fraction tiles, but I didn’t do that. Oh well. Again, with everything done and grouted and the room complete, it’ll be fine. I’m just pointing it out because I’m human and I make mistakes and mistakes are bound to happen, and now I know better! (and my bathroom/future kitchen tiling will be PERFECTION. Mark my words. I know things now.) 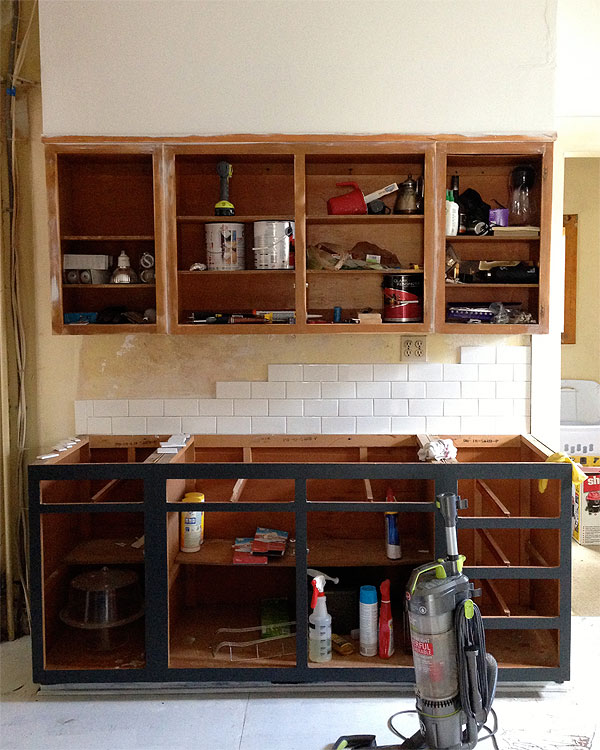 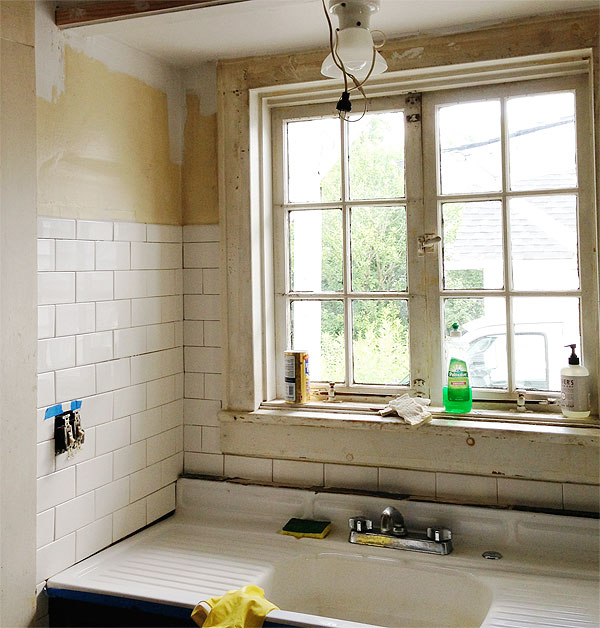 First I thought I’d do the subway tile level all the way around the room (so the backsplashes and this sink area would all have the same number of rows of tile), but then that seemed a little too dinky for here. Then I thought maybe I’d take the tile all the way to the ceiling (well, to the bottom of the big hollow soffit over the sink, anyway) in this sink area, but that had a whole mess of complications I won’t bore you with, including maybe just looking weird. Then I used the super-professional method of eyeballing it until the proportions seemed right, which is why there are more tiles here than the other areas of the kitchen. Science!

Overall, there was just a ton of fudging and making it work and eventually throwing my arms up with a hearty GOOD ENOUGH! in this area around the sink. Trying to get tiles to line up on three wonky walls with the sink and the window molding was just…not going to happen. With everything painted, caulked, and grouted, though…well, you know what I’m going to say already. It’s going to be totally fine. Nice, even. I promise! 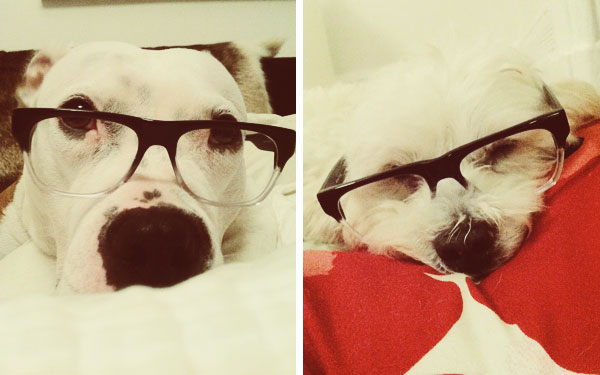 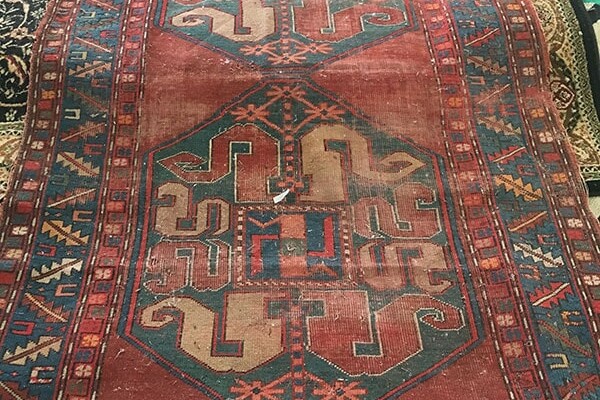 Let’s Go to the Auction! Tips and Tricks and A Big New Addition! 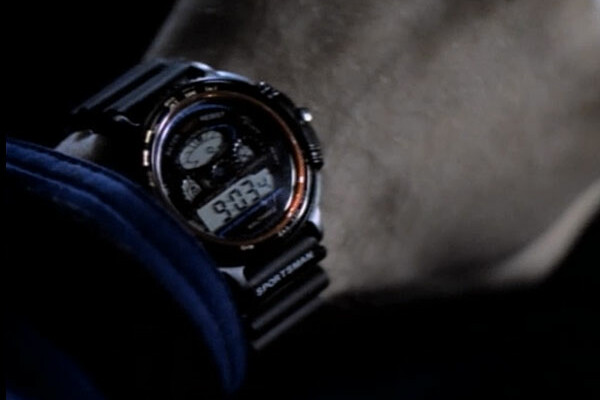