People who have gone through major renovations tend to have a lot of sage advice about how to stay sane, follow through on tasks, and get the job done in an orderly, timely, and efficient fashion. They excel by keeping careful lists, the items of which they dutifully check off, taking its diminishing length as evidence of their success and the motivation to keep going. They keep their tools organized, in polite drawers and on pegboards, and they always know where their drill bits and pliers are.

I tried kind of hard to be like that, at the beginning. I spent a good 45 minutes every single night putting away all my tools and organizing everything. I was even going to do a whole post about it, like a total model citizen grown-up who knows how to not be a disaster.

All of that fell apart really quickly when we decided in a bout of excited, rash decision-making to start painting the kitchen cabinets! Seeing as we have no furniture, I was storing all my things in the kitchen cabinets and drawers. Losing the use of the drawers, I just sort of threw everything into the side porch (mistake #1) and then proceeded to let everything go to pieces like a wild animal (mistake #2). I decided to maybe just relax a little. Loosen the reigns. Let instinct and intuition guide my process. What could go wrong? 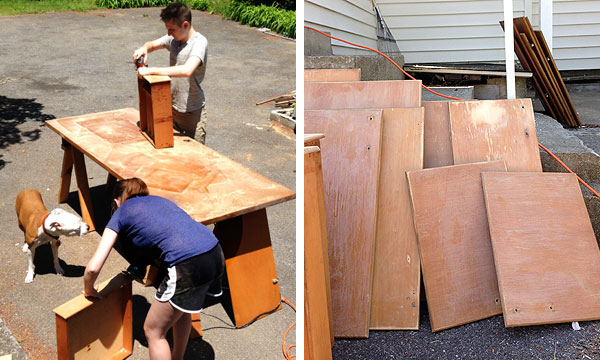 First I removed all the cabinet doors and drawers and moved them outside. I’m not generally a stupid person, but for some reason it hadn’t occurred to me just how many there would be——I think 18 cabinet doors and 15 drawers. As we found out, having over 30 small separate kitchen components that all need to be sanded, patched, painted, and reattached with no plan or system in place is not a recipe for an efficient painting experience.

Then I put everyone to work (Max, Nora, Mekko) on sanding everything, because I’m a merciless dictator. Since we’re painting rather than refinishing, we didn’t need to go down to bare wood, but we did need to rough up the surface enough for the paint to adhere, while also smoothing out existing imperfections. It looks like at some point these cabinets were polyurethaned in place, so a lot of them were covered in dried-on bumpy drips or traces of old adhesive or other nastiness that had to be worked out. 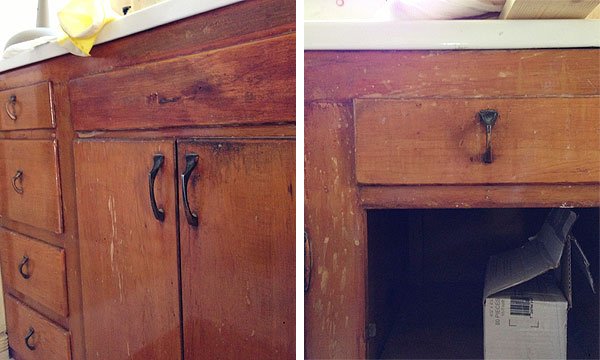 SIDE NOTE. Before anyone gets up in my grill about painting perfectly nice wood cabinets!, know this: these cabinets were totally disgusting and totally gauged and messed up and terrible. They’re going to look way better painted, and refinishing them would have been a ton of horrible work for a really mediocre outcome and then everyone would be so sad.

OK. That’s settled. I said so. 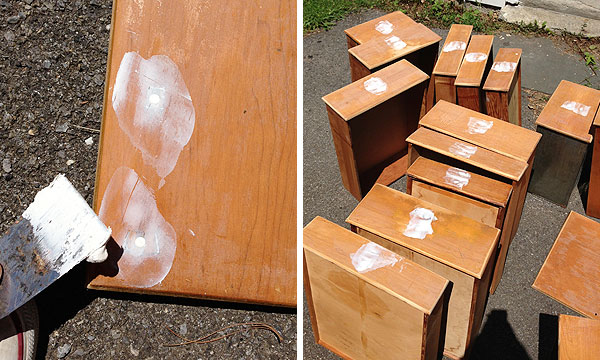 After sanding everything, we wiped it all down with a damp cloth and a little slightly soapy water and patched all the old hardware holes! Originally, I thought maybe I’d reuse the old hardware to save some time and money, but it was really corroded and generally destroyed to the point that even Barkeeper’s Friend couldn’t save it, and I didn’t like it enough to spray paint, so it had to go. We’ll reuse the hinges, though.

We used Ready Patch for the holes, which is really a spackle compound made for walls, but I like it for small applications like this. I haven’t had good experiences with most wood fillers since they always tend to dry sort of grainy and weird, even after sanding (except for Bondo, but that would have been major overkill), and I didn’t want to have a visual textural difference where the holes were patched, so I figured this was my best bet at a seamless finish. I wouldn’t recommend a gypsum-based product for wood repair in any case where it has to hold up to heavy wear and tear, or any patch much bigger than something like this.

After the Ready Patch was dry (a few hours out in the sun), I went over all the holes again with a little mouse sander. A sanding block would have been just as good, but this made the whole process super fast. 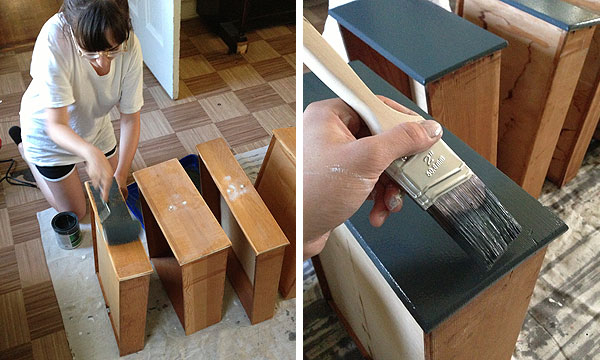 The painting part is where having a good plan and system and dedicated staging area would have really come in handy. I’m not really sure what we were thinking, but we ended up painting the doors and drawer fronts days apart, and the whole process dragged on forever. It could have been WAY easier if we just took the time and set it all up and did everything en masse, but…I don’t know. There was a lot going on. I wasn’t thinking. Chaos.

We did up our speed and efficiency moderately, though, by using a roller to coat the surfaces and then quickly following up with a paintbrush. This might be controversial, and call me crazy, but I really don’t like the look of painted furniture when it has any kind of roller texture. Short of spray painting everything or using oil paint (spray paint doesn’t allow for the color selection and would get really expensive, and both spray and oil are hassles), it’s hard to literally have no texture when painting cabinets, so I guess I’d just rather see very subtle brush strokes than very subtle roller bumpiness. It’s a weird personal preference thing. I can’t explain it.

To minimize either, though, it helps to water down the paint a little bit. It wasn’t hard or terribly time-consuming to paint this stuff, so I didn’t mind doing 3 coats instead of 2 and waiting a little longer for it to cure. We used the same Clark + Kensington paint on the cabinets that we used on the walls, but the thickness of the paint that makes it great for walls isn’t exactly what you want for the texture of cabinets.

The color of the base cabinets is called Arabian Nights, by the way, and we used the Satin Enamel formula, which isn’t as shiny as semi-gloss but still totally wipeable and has a nice sheen to it. I love the color——like a super dark inky grey-blue-black. It’s going to look sooooo good. 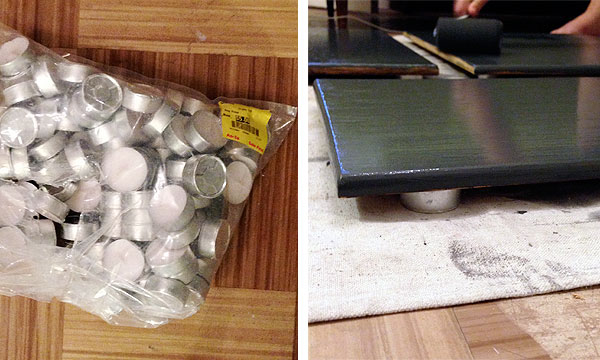 We painted the doors the same way as the drawers, with the added help of a big bag of tea lights from the as-is section of IKEA! They were perfect for putting under the four corners to hold them off the ground a little, so paint didn’t puddle or anything. I felt very smug and clever about this. 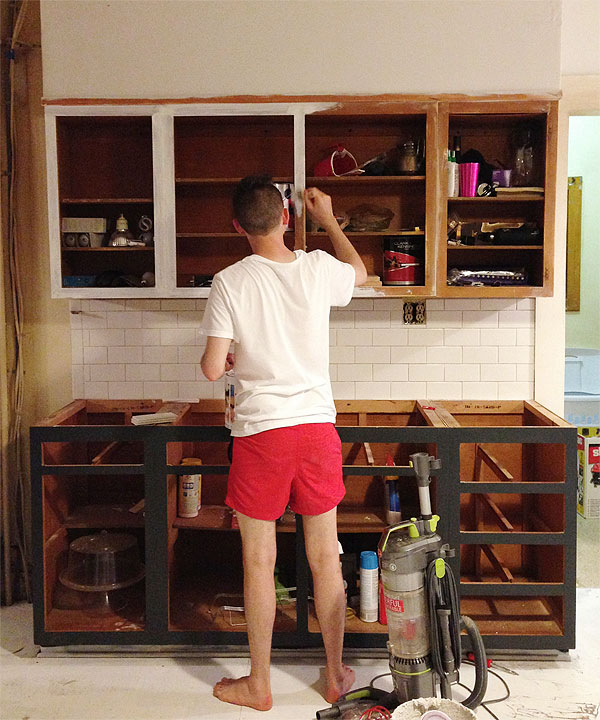 While this drawer/door shenanigans were going on, we were also painting the cabinet frames! We prepped the cabinets by sanding all of the frames (there was so much dust and disarray in the room anyway that adding more didn’t really matter) and then caulked the seams, since gaps between the frames would be extra-noticeable once they’re painted. We didn’t prime the lower cabinets, but since we’re painting the upper cabinets white, we figured it would be worthwhile to do a coat of primer first, just to ensure that anything in the wood was sealed in and wouldn’t eventually visibly leech through the paint. Paint + primer types of paints are GREAT for covering dark-colored walls and stuff, but if stain-blocking is a concern, it’s safer to just go ahead and prime. We used the same B-I-N shellac-based primer that we’ve used on other parts of the room.

Also, look! Max is painting! All this kind of stuff has always been really more *my thing*, but there is way too much to do in this house for me to take it all on by myself (or with amazing friends, when we’re lucky enough to have them). It’s already made us so much better at working together on stuff like this, and I’m really proud of Max for being open to learning how to do things, even if it isn’t where his interests necessarily lie. He’s good, that one.

I mostly just wanted to use this picture because Max’s chosen painting outfit of a bathing suit and one of my t-shirts is really cute. He has thusfar refused to sacrifice any of his real wardrobe to a dedicated DIY outfit. Shall we wager how long that lasts? 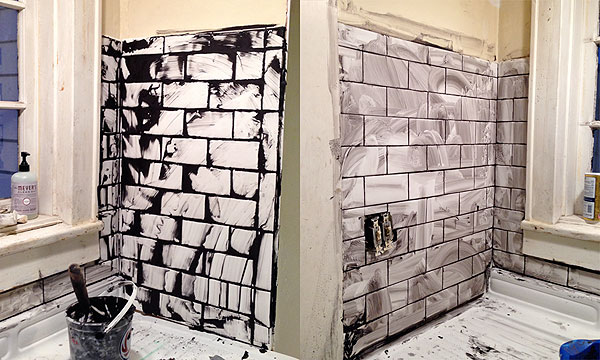 Sometime during all of this, I also grouted the tile! Grouting tile (especially with black grout) is one of those scary and awful experiences, but once it’s done… 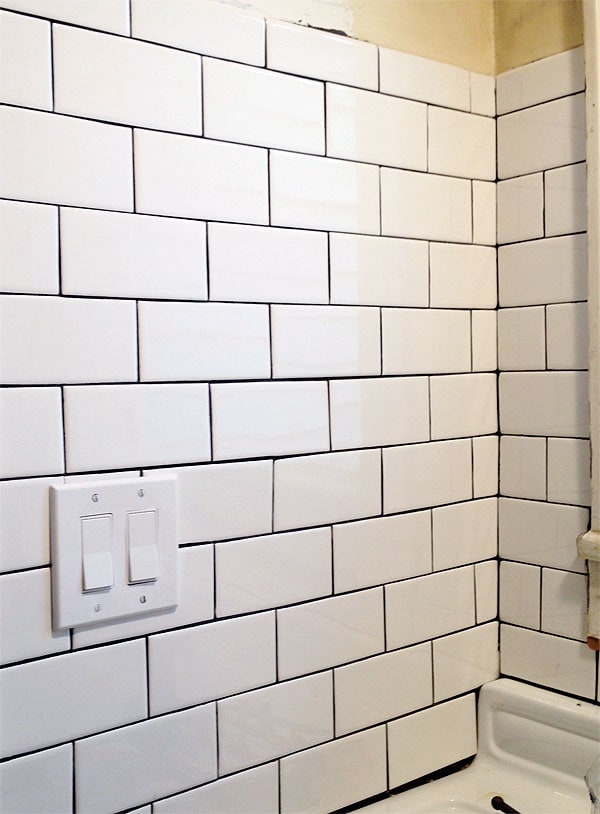 Oh yes. Hello. I want to lick you.

The corner and the gaps between the sink and the tile still need to be caulked and the wall and molding still need to be painted in this picture, but still. Tile. It makes my world go round.

I also changed all the light switches and outlets! I don’t know why, but this was honestly one of the best improvements in the kitchen to date. Changing light switches is INCREDIBLY quick, cheap, and easy, and just immediately makes things feel fresh and updated. I chose to use these flat switches instead of normal toggle switches. They’re slightly more expensive (like $2.50 instead of $1, something like that), but I think they look nicer. 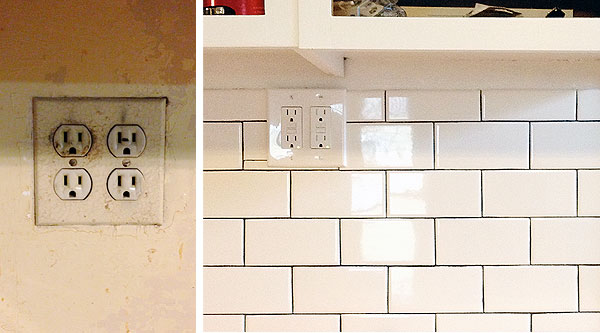 I chose to install GFCI receptacles for all of the kitchen outlets, which is now required by National Electrical Code for kitchens and bathrooms. Each outlet costs about $13, which is kind of a drag, but it’s nice to make things safer and all that. GFCI outlets install a little differently than normal outlets, but it’s still something pretty easy that anyone can do, assuming you have access to turn off the power from your electrical panel first! (here’s a video if you also want fancy GFCI outlets with subtly modern little green lights on them. The outlet will also come with semi-clear instructions to help you out.)

Here is an action-packed picture of Linus assisting with the great cabinet effort of July, 2013, since clearly I’ve run out of things to talk about and it’s lame to end a post talking about electrical outlets. 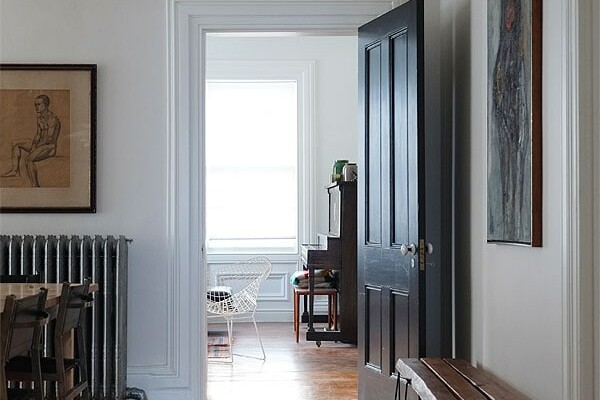 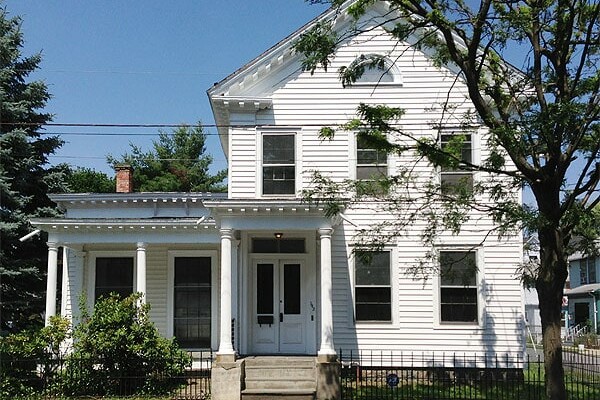 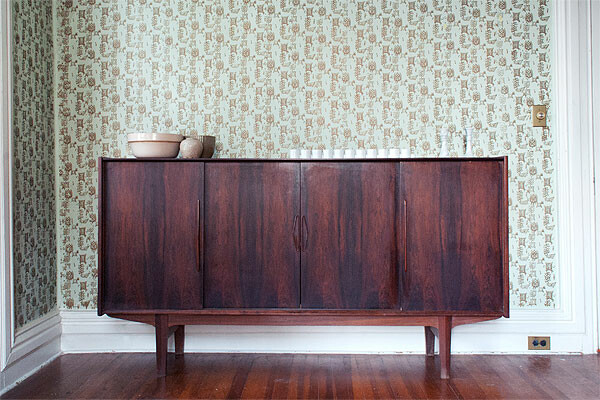