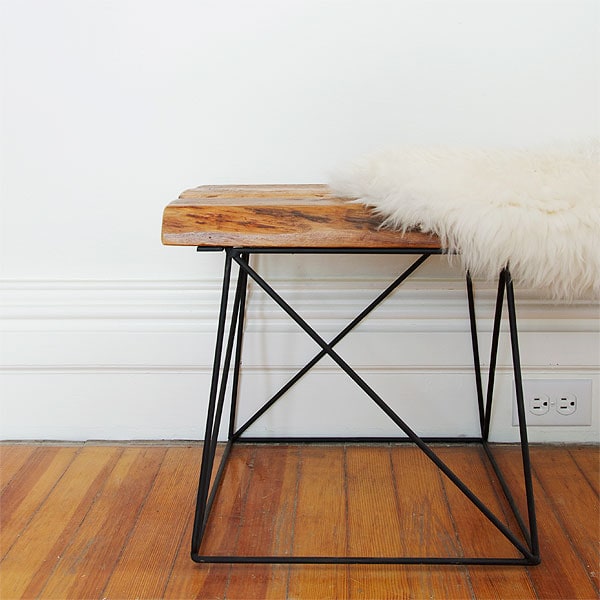 It’s no secret that my blog has changed a lot the past couple of years. When we bought the house, my little thrifting/DIY-logue sort of turned into all-out balls to the walls renovation craziness. I’ve written (and perhaps you’ve read…) entire posts about semi-technical plumbing matters and roofing and skim-coating walls and all manner of things that were barely on my radar before all of this lunacy started. I never made some kind of conscious choice to start doing that, but this blog is, after all, a loose reflection of what’s going on in this area of my life…and that’s the kind of stuff I’ve been up to.

Sometimes I need a break from talking about that stuff, though. I miss the other stuff. The smaller projects. Those fun little things that take a couple of hours and then…BOOM: NEW THING! I lovingly refer to these projects as Blogger Projects. Projects can be more or less Blogger, depending on their materials, steps, and length of time to complete. To me the most Blogger Projects involve four basic steps:

1. Reuse a mass-produced object that a reader can go buy.

3. Complete project in 30 minutes to 1 hour. Obviously then you have to photograph it while the light is still good and throw together a post so devoting too much time to the project itself is just unwise. Everyone will pin it and forget it anyway so it doesn’t even really matter if it falls apart right after the pictures are taken.

4. Promote that object because damn, you’re one clever blogger and you thrive on the attention.

Obviously there are degrees of blogger-ness, and I’ll leave it to you to create your own scale. Like, to me, if a project involves washi tape it’s Very Blogger and might score a high 6 or 7. But put that washi tape in a chevron pattern and that’s a 10 out of 10 right there. Super Duper Blogger.

Point is, a couple of weeks ago I got the itch to complete a Blogger Project. On the scale I’d maybe put it at a 4 or 5 for various reasons I’ll get into, but it’s still relatively Blogger. 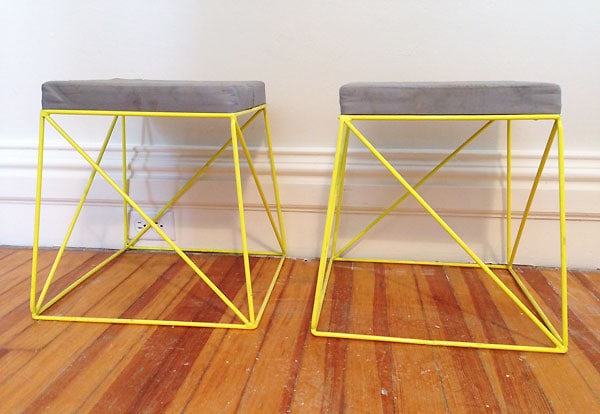 I bought these funny little ottomans at Target, oh, maybe over a year ago, so I lose some Blogger Points because I can’t tell you how to buy them. They’re discontinued now and long gone. They were part of the cheap dorm “Room Essentials” line and I think they were $15-20 each. I really disliked the color of the bases and the top (it’s just a cheap piece of foam with a cheap nylon upholstery overtop), but the shape of the bases is so nice! They’re powder-coated steel, so they’re very sturdy and seem well-made, too.

Anyway, I didn’t know quite what I was going to do with them at the time, but I knew the bases would be useful for something. My other big idea was to get two pieces of marble remnants cut for the tops and use them as bedside tables. I could have sworn I bought four, so if the other two ever resurface I’d still be down to make that happen.

So anyway. Thing from Target. 1 point. 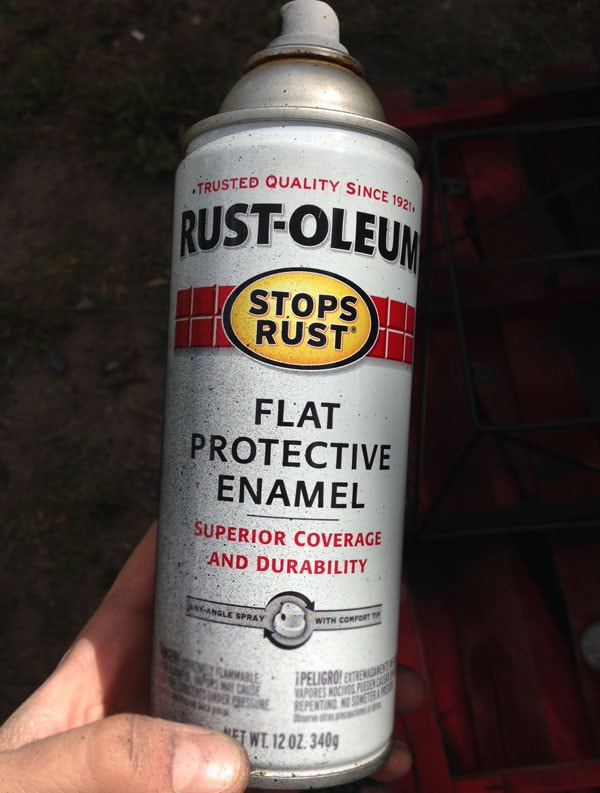 Where would bloggers be without spray paint? I mean really. I unscrewed the upholstered tops from the base and threw them away. Then I wiped off the bases with TSP substitute (they’d been sitting in my basement for a while and were sort of grimy), waited for them to be totally dry, and hit them with a couple coats of matte black spray paint. It was a little tricky to get into all the nooks and crannies what with all the angles on the bases, but I managed. I’m a professional. 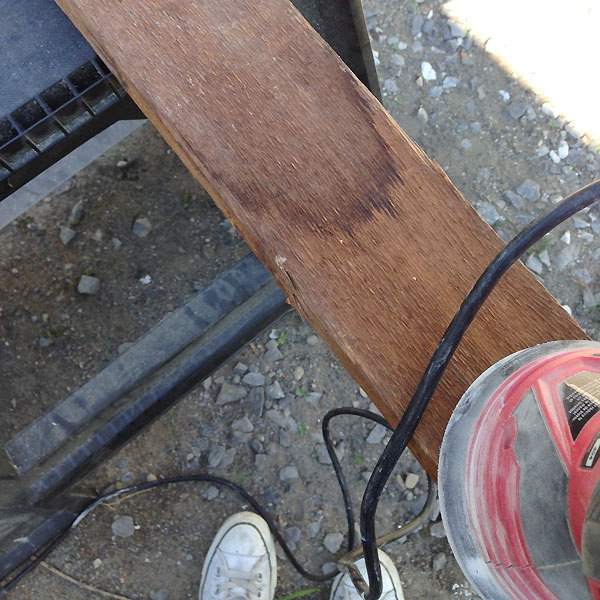 This is where things get really exciting. I’m fanatical about saving any old lumber that comes out of my house, which is becoming a huge problem over at the cottage, where there is lots and lots of old framing lumber . Even just lath and framing lumber feels totally wrong to just throw away, especially because I know it technically can be reused in interesting ways (that I am unlikely to actually do, let’s be real). Anyway. I had 4 six-ish-foot long old 2″x4″ studs that came out of our downstairs bathroom ceiling during demo. I still have to talk about how the rest of the demo of that room went! OOPS. Anyway, these studs are probably about 150 years old, super splintery and grimy and gross, but I threw them in the basement anyway because that’s what I do. My basement is truly horrific.

Anyway, I’m going to give myself a Blogger Point for reclaimed lumber. I’m on the fence about this but I think it qualifies. 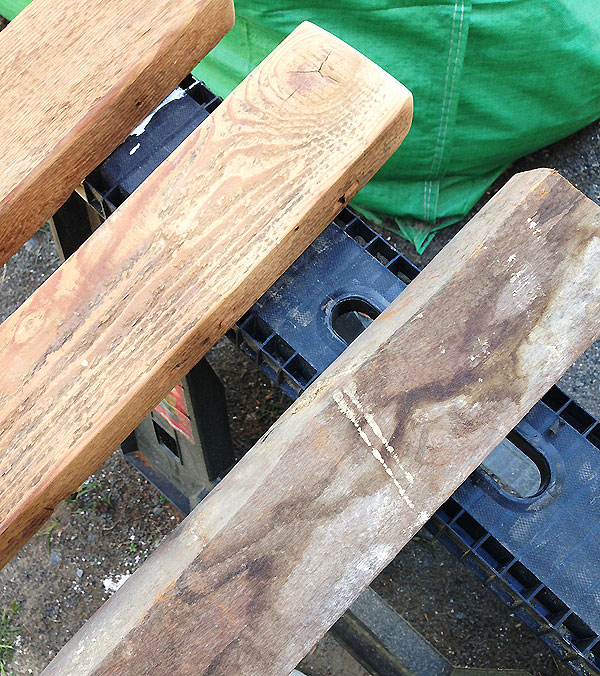 Anyway, after yanking and hammering through all the old nails, I sanded the old studs. I generally find sanding wood pretty exciting, especially when it’s like this! The wood on the right hasn’t been sanded and the other two boards on the top have—huge difference, right? I just used 60 or 80 grit on an orbital sander and went over all sides until the studs no longer seemed super rough. It’s hard to know when to stop with wood like this, and a lot of it comes down to personal taste. Trying to get the wood too smooth would sacrifice too much of the dark spots and overall patina, so I tried to keep the sanding fairly minimal—just enough so the wood didn’t seem like a splintery hazard. Remember that any type of finish will also darken the wood and bring out the natural tones, to the post-sanded, pre-finished wood is much lighter than it will look when all is said and done. 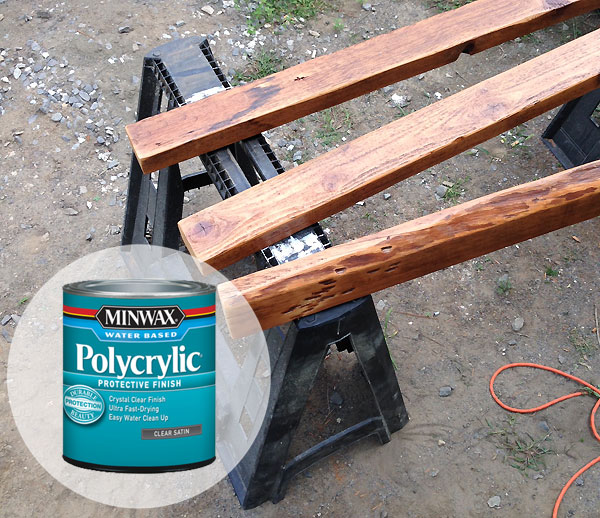 Ideally I like to use more natural-looking, oil-type finishes for stuff like this (like Tung Oil Finish or Danish Oil), but in this case the wood was still kind of rough and I decided good old water-based polyurethane was the way to go. I have to say, I really like this stuff. The satin finish gives a nice amount of sheen without looking shiny or plastic-y, and it does a really effective job of not only sealing the wood, but also smoothing out imperfections and sort of filling in the grain on softer woods like this. The water-based stuff dries super fast, too, so usually I brush it on, wait half an hour, lightly sand, and brush on another coat, and repeat. 2-3 coats is usually best. 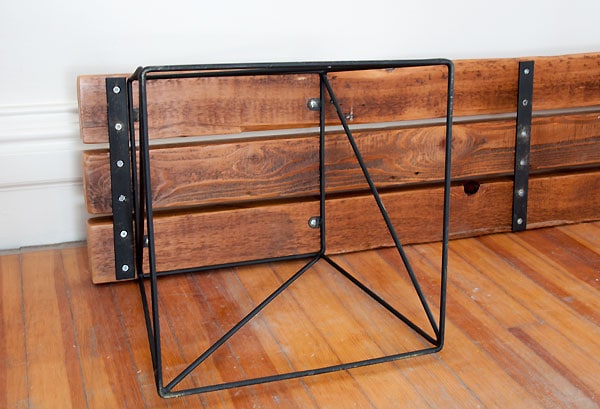 Constructing the bench was very simple. I just used 3 12″ steel mending plates (which I also sprayed black—one on each end and one in the middle) and screwed them into the wood with #10 1″ zinc wood screws. Done. After that, it was just a matter of screwing the bases into the new wood top through the original holes. Easy peasy. 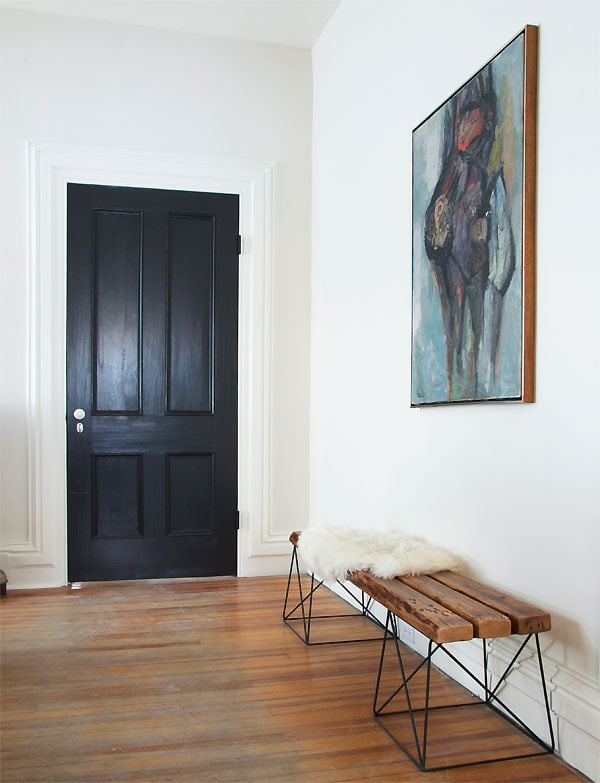 Aaaaaand, bench! Done! In the dining room! I like this thing. It was simple to make (the whole thing took a few hours, but most of that was just waiting for stuff to dry), and it’s high enough to act as additional seating if we have lots of people over and need to expand the table. I like that I don’t have to keep extra chairs floating around in the room for that. I threw an IKEA sheepskin on top because, well, it’s very Blogger to do that sort of thing. 1 point. 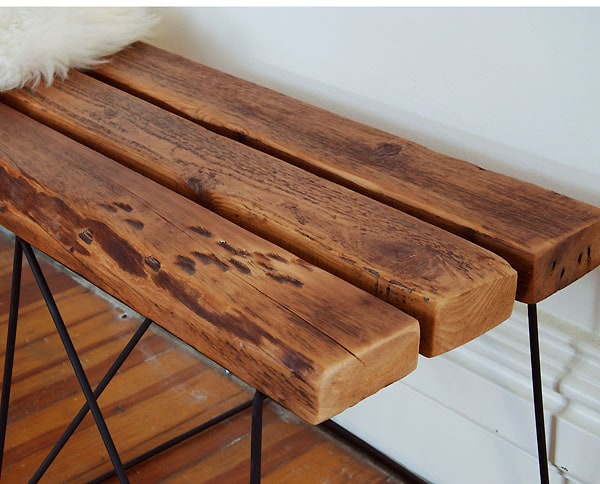 I really love how the lumber turned out. It’s really smooth to the touch because of the polyurethane, but it still looks rough and worn and old, like I like it. The color is so rich, too. See why I can’t just throw it out? I have a problem.

OK, back to our regularly scheduled programming super soon. I have COTTAGE DEMO to discuss!

EDIT: It has been requested (mainly by my mother and brother) that the dogs be included in this post, so here we go. Mekko wasn’t in the mood to have her photo taken but Linus doesn’t know what’s going on either way, so here! He’s getting groomed tomorrow. 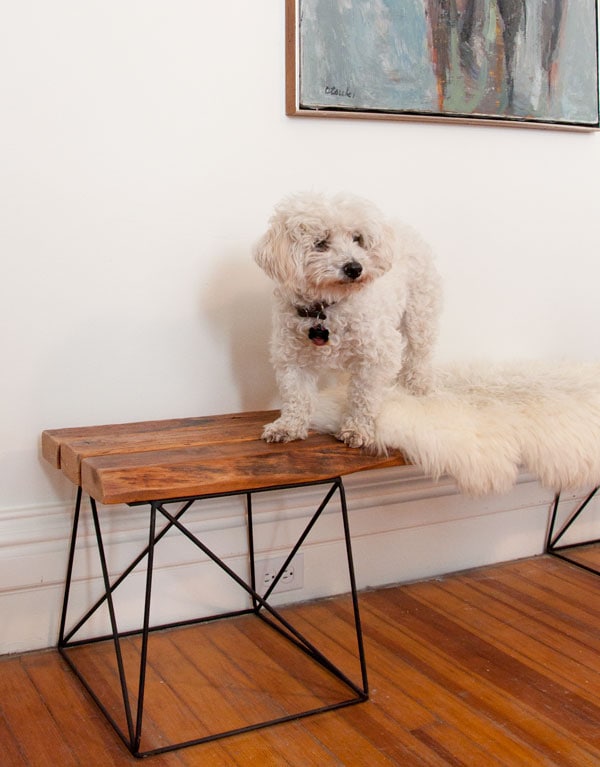 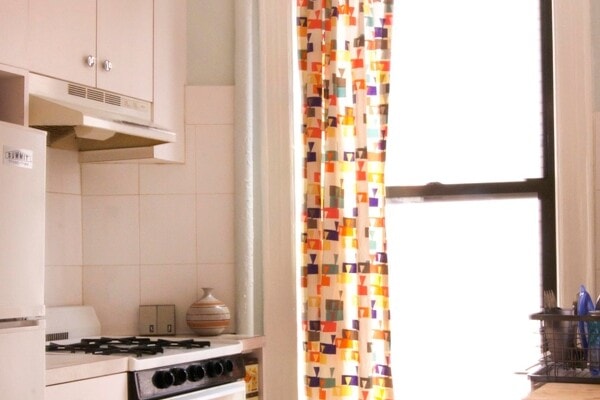 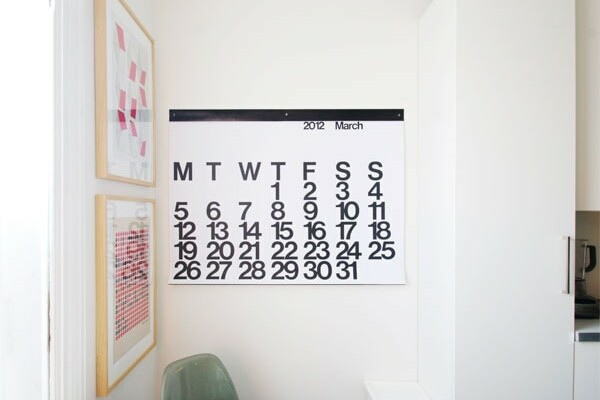 Dear Kitchen: It Gets Better. 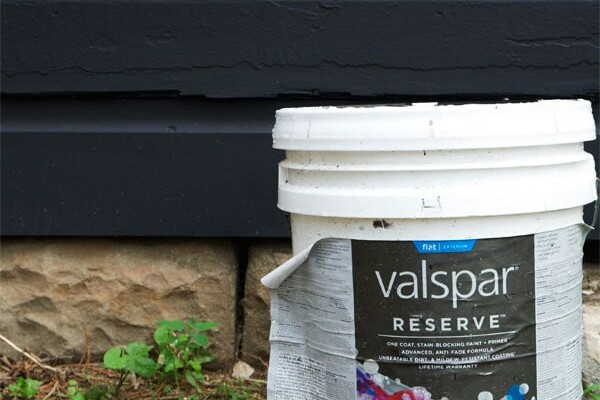