As we already know, my kitchen for the past nearly two years has been a sorry gutted pit of despair. Let’s not dwell on it. If you didn’t already know, here’s a basic rundown. Life comes at you fast sometimes.

While the period between gutting the old kitchen and finishing the new one might be JUST A TAD longer than what a more normal renovation might demand, most kitchen renovations do result in a space that’s temporarily unusable. The classic response to this is often some combination of microwaveable meals and take-out, the latter of which I am ALL ABOUT except for the part where it gets insanely expensive and super unhealthy and, honestly, pickings are slim around these parts. Additionally, I actually do like to cook my own food, especially to wind down a bit at the end of the day!

SO. If you are anything like me, and you might be taking on a kitchen renovation, HEED MY WORDS: give yourself the gift of setting up something efficient and functional in the meantime. It can be tempting to just throw yourself 300% into the renovation while your life disintegrates into squalor around you, but you actually don’t have to make your house a living hell of dysfunction as punishment for trying to make it better long-term. Don’t be a martyr. It’s taken me…a while to learn this. 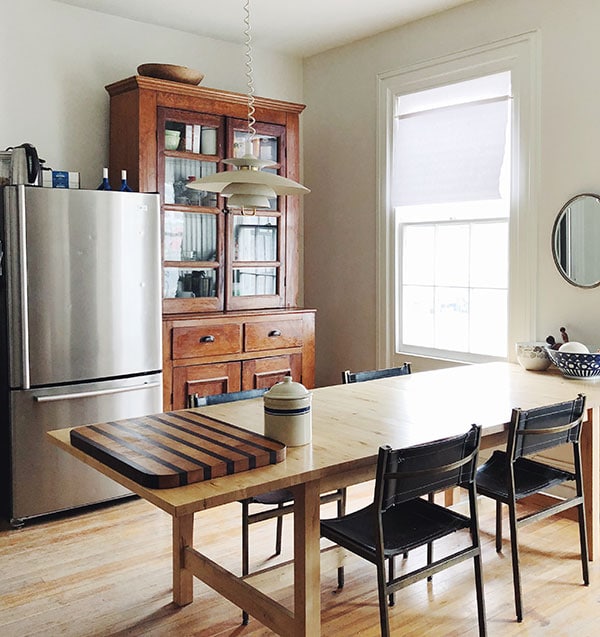 For me, the most painless way to do this was to set up my dining room as a temporary kitchen. And honestly? It’s not the worst kitchen I’ve ever had!

I turned the dining table the other direction to free up a little space for that honker of a fridge next to the hutch. That big butcher block is my makeshift countertop, and the cookie jar thing holds food scraps for compost. I know they sell containers for this very purpose, but I find that it needs to be emptied because it’s full long before it ever starts to stink, so I like my vintage crock thing.

I gotta hand it to that fridge, by the way—it came from my friend Anna‘s old kitchen and is at least a decade old and aside from a few dents on the door (don’t ask), might as well be brand new. All LG appliances (including televisions!) I’ve ever had have been wonderful. Sometimes I get a little weepy over how great my LG washer and dryer are. On one hand I kind of hope the fridge dies because having a built-in ice-maker would be HEAVEN but at the same time, a new fridge is not an expense I need to incur at this moment. Anyway. Carry on, fridge. A+ work. 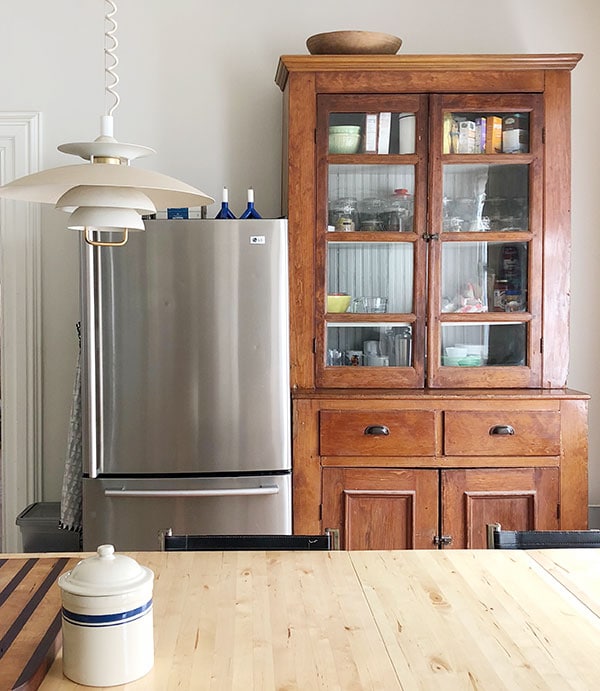 The hutch now holds all my everyday dishes, glasses, mugs, mixing bowls, colanders, measuring cups, etc., as well as pantry items! That thing can store so much shit. It’s not the most beautiful display I’ve ever put together, but it’s organized and efficient and works! Good enough! 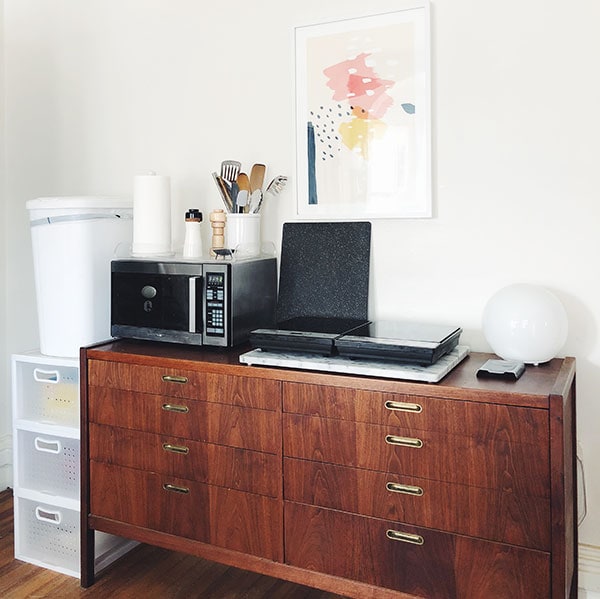 Speaking of unattractive but organized and efficient displays, here’s what’s happening on the other wall! You might recognize the dresser from my old Brooklyn apartment, but I think it was originally intended to be a server. Those top two drawers are the perfect depth for storing flatware and various cooking utensils like peelers and pastry brushes and measuring spoons and stuff like that. The other drawers hold saran/foil/plastic bags, tupperware, pots, pans, oven mitts, tea towels—I basically have a whole slimmed-down kitchen in there! Those plastic drawers next to it could probably be eliminated, but do hold a few things, and mostly provide a pedestal for the trash so that my adorable and naughty dog doesn’t get into it. That girl is incorrigible. 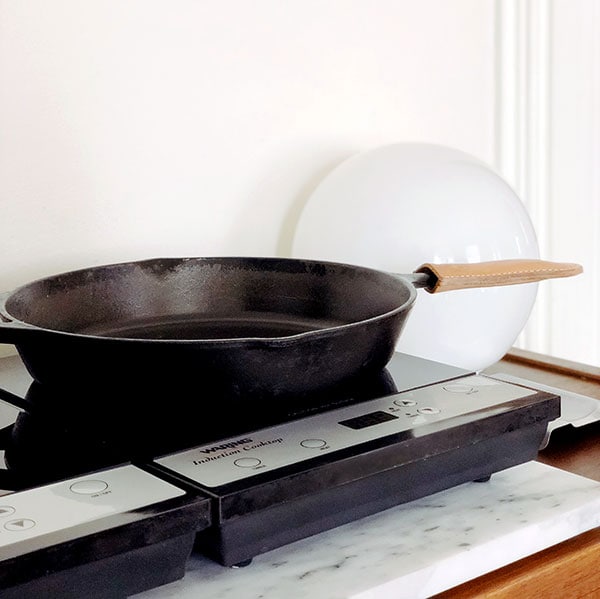 I have to pause for a second to gush over these little induction cooktops because I LOVE THEM SO MUCH. Induction is pretty crazy/amazing technology that I won’t claim to totally understand, but essentially it turns your pot/pan into the heating element, rather than heating the pot with an electric coil or a gas flame. It’s super efficient and precise, and because the cooktop itself doesn’t heat up (although it DOES get hot just from the residual heat of the pan during cooking), the cooktops are incredibly easy to clean—WAY easier than an electric glass cooktop. After a bit of searching around, I bought two of these single-burner cooktops by Waring for just $60 a pop! They make a double-wide version too, but I’m glad I bought these because they can stack and store away easily. For over double the cost, you can buy one with the Cuisinart brand name on it, but it’s literally exactly the same product so don’t do that.

Anyway. I love my little hot plates a lot. The plan for the kitchen is a gas range, but I can totally see myself continuing to use these now and then if I just need to boil some spaghetti or fry an egg or just keep something warm on the lowest setting. Endless opportunities!

Oh also! That leather skillet grip was a Christmas gift from bae and it’s perfect. It was made by locally owned and operated Jay Teske Leather Co.. And now that I’m looking at their website, I want to order about 5 other things…so much nice stuff, gah! I love the way natural leather patinas over time and expect to have it forever. I love that there are so many artists and makers producing stuff like this right out of Kingston. And at $24, I mean, such a good gift idea.

Oh also, also! The marble piece is this pastry slab from Crate & Barrel, which amazingly is still the same $50 as it was when I bought it several years ago. Once I tried to find a less expensive alternative, but this one’s such a great value for the size that I couldn’t beat it. 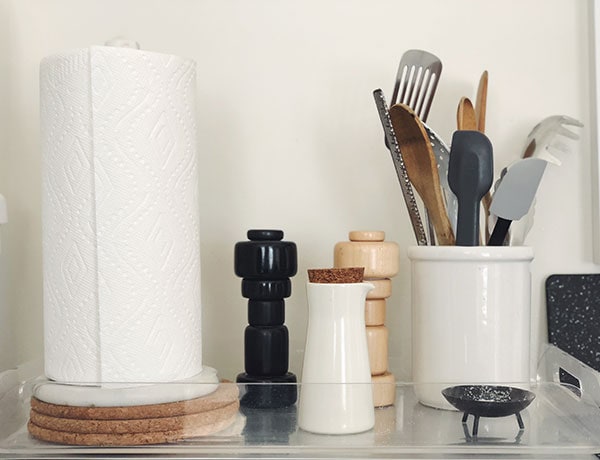 On top of the microwave (also a hand-me-down from Anna—thanks, pal!) are a few essentials within easy reach! I don’t know what that little teeny tripod bowl is for, but I use it to hold Malden Salt flakes which in my experience make all food taste better. A few cork trivets, paper towels, salt and pepper mills, and I decant olive oil in that little cork-lidded container which is supposed to be a creamer.

Side note: just realized the creamer was designed by Kaj Franck, who also designed my mushroom bowl from my last post!

Side-side-note: who knew BB&B sold iittala?! That little stack of 20% off coupons just got a whole lot more valuable. 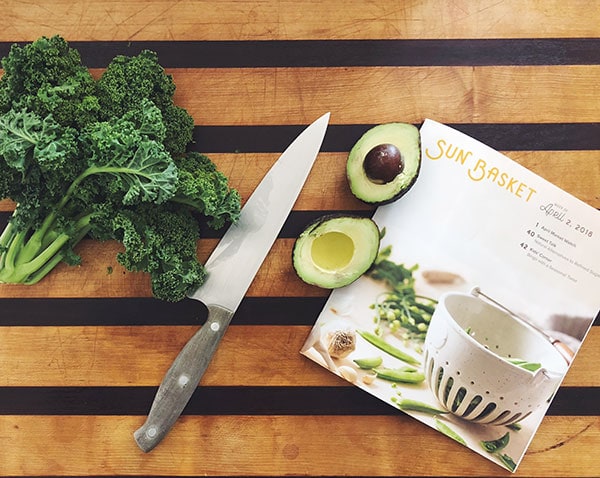 In terms of actually cooking instead of just talking about cooking…I have a hard time getting to the grocery store regularly while in the midst of big house projects, and Sun Basket has been a GODSEND. I know, all you wanted today was to read another blogger review a meal delivery service. BUT I have no affiliation whatsoever with them, I just heard about them a few months ago on a podcast about cults like any other normal person and gave it a shot.

It’s been several years since I used a meal kit delivery service (Max and I used to get Blue Apron—also no affiliation), so I’m not sure how far the others have advanced, but Sun Basket is the best as far as I’m concerned. The food is REALLY good, produce is fresh, portions are generous, and I’m always kind of stunned when I look at the calorie counts—each meal is usually somewhere around 500-600 calories but you’d never know and it does not feel at all like diet food. Every week, they put out a menu with 18(!) different meals to choose from, of which you can either pick your selections or let Sun Basket do the work for you by specifying a meal plan. The meal plan thing is AMAZING—there are 8 options like Paleo, Vegetarian, Vegan, Pescatarian…and gluten-free! This is a big deal for me. Bae needs to be gluten-free, so consequently I end up being mostly gluten-free, and figuring out what to cook is hard enough already without throwing dietary restrictions into the mix. Sun Basket’s gluten-free meals have made that transition a billion times easier and unquestionably tastier. You can also skip as many weeks of delivery as you want, get 2, 3, or 4 recipes each week that can feed either 2 or 4 people! I have mine set up for three recipes a week for two people ($78), but it’s easy to bump up to 4 recipes or down to 2 if the spirit moves me. Each delivery comes with a little recipe book containing all the recipes from that week, so you can reconstruct and cook ones that you didn’t even order to try out. They’re actually good enough that you want to do that, for real!

The cooking part is nice, by the way. It’s never too complicated, but is involved enough that you really feel like you’ve made something instead of just tossing some pre-measured stuff together. Typically recipes will require 1 or 2 pots/pans and rarely do they call for the use of an oven, which is convenient because I don’t have one. I do have a lil bitty toaster oven, though, and that’s usually fine for whatever the recipe’s asking me to do. It really just works out well all around!

ALSO JUST SAYING: if you were considering trying out Sun Basket, now is a good time because they’re running a promo for $40 off your first order! And if you follow this link to place your order, I’ll get a $40 credit too, which I would not complain about. 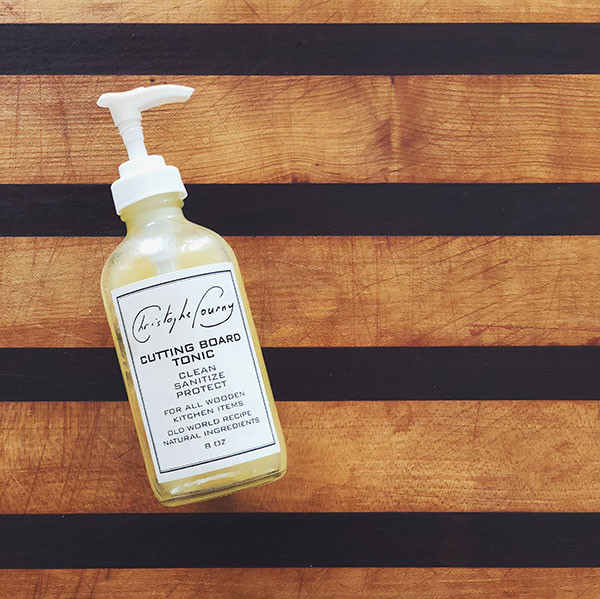 Annnndddd while I’m just recommending ways to spend your money left and right, I just got a bottle of this stuff and it’s SO GOOD. Expensive and SO GOOD. I’m gonna have to experiment with trying to make my own because I cannot afford for this to be a habit, but I’ve never used something that cleans and protects a wood countertop in one fell swoop, and I just want to smear it all over every wood product I own. Liquid. Motherfucking. GOLD. 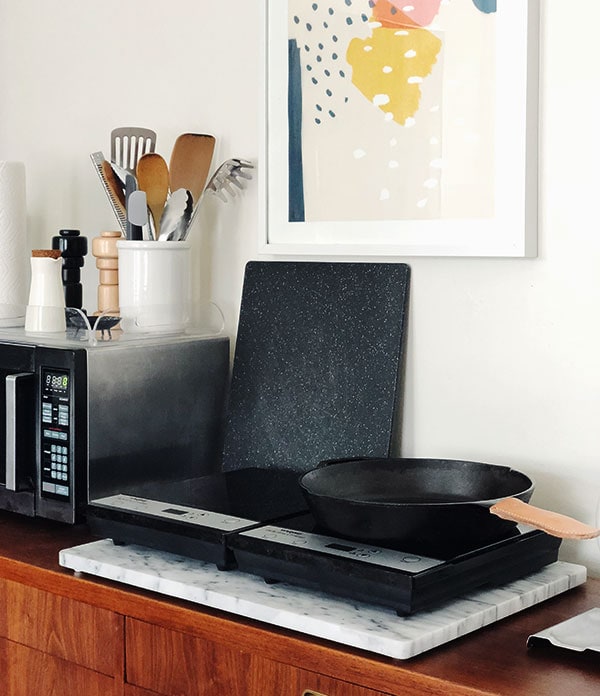 So there it is! The irony of gutting a pretty decent kitchen with the goal of building a better kitchen and then ending up living with this for two years isn’t lost on me. But I do feel like this “kitchen” has actually taught me a lot about what I actually need rather than simply want, and has really forced me to evaluate the utility of each and every kitchen item I own—it’s amazing how much extraneous stuff we can justify when we have the space for it. Also, just IMAGINE how luxurious my expanses of countertop will feel after becoming so accustomed to this set-up. I won’t even know what to do with it all.

The ounce of shame I have left will not allow me to show the dishwasher strapped to a stud in the kitchen to keep it from tipping over and draining into a five gallon bucket that I dump in the backyard because the kitchen sink still isn’t plumbed, so I’ll just let your imagination run wild with how fancy that is. Related: what the hell is wrong with all plumbers? That’s not a question that needs an answer, just one that I ponder constantly. LET ME GIVE YOU MONEY TO DO THE THING THAT YOU DO TO MAKE MONEY. PLEASE.

Anyone ever plumbed a kitchen sink? Asking for a friend.