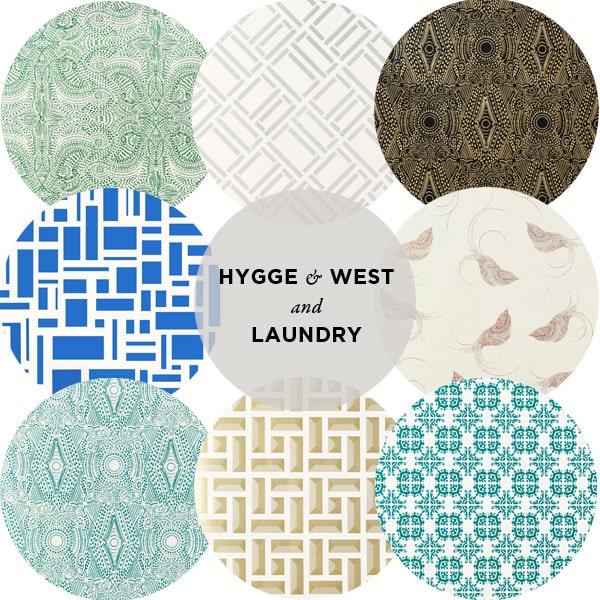 If you felt a sudden shift in the air yesterday while you were hopefully doing something more fun than I was doing (eating falafel from a food truck on the side of the road under the JMZ in north Brooklyn, just trying to get home, my subway card as empty as my stomach…dark times.), you were most likely feeling the latest collaboration from one of my favorite wallpaper manufacturers, Hygge & West, being released into the world! This time, the wallpaper magicians at Hygge & West teamed up with Portland-based Laundry to create 6 new patterns (each of which comes in a few different colorways!) inspired by traditional Mexican designs. If “inspired by traditional Mexican designs” doesn’t sound exactly like my usual jam, you may be correct, but I love these! Each pattern is so pretty and the colors and metallics are SO good. I kind of want to design rooms around all of them and then make those rooms happen in my house and other people’s houses and just all the houses. Everyone deserves a little wallpaper.

Even though the tiny office space is currently a grotesque disaster of horror and despair, that is not going to stop me from planning what I want it to be. I tend to shy away from wallpaper in really large applications for myself (a personal shortcoming I can’t explain), but I LOVE to wallpaper little tiny spaces. It’s like a little special unexpected something to make those often-neglected spaces feel totally special and awesome. I’ve always been planning to wallpaper up one wall in the little office, but I didn’t know which wallpaper…UNTIL NOW. 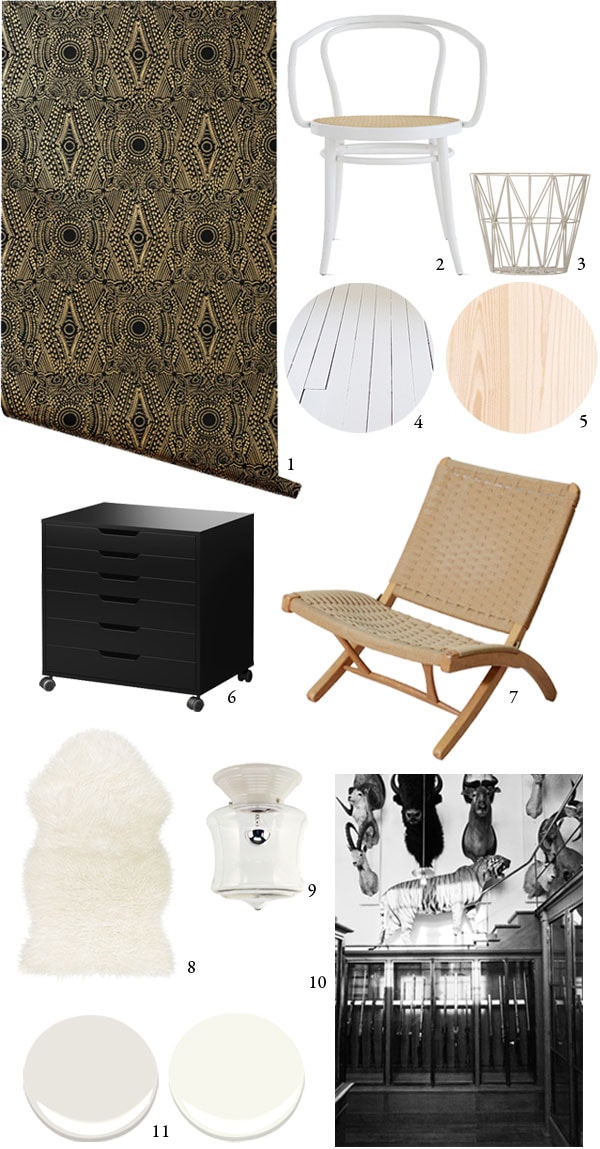 BLAM, office plan. I’m into it.

1. HYGGE & WEST: I’m going to wallpaper the long wall opposite the door with the new Diamante pattern in black/gold. GOLD, YOU GUYS. It’s going to be amazing. The pattern is so pretty and intricate, and…GOLD. It’s really important to me to add more warm-tone metallics to my life, because it is not brassy/goldy/coppery enough as it is.

2. DWR: Max and I found this Era Round Armchair at the Design Within Reach Annex store for something like $75 because the arms are a little scuffed up. I think it’ll make a nice simple desk chair——it’s comfortable but also really visually light, which will help keep the space from feeling crowded.

3. FERM LIVING SHOP: I’ve wanted one of these wire baskets FOREVER but never really had a worthy place. I think this might be the worthy place…

4. White floor! White floor! White floor! As soon as I set foot in this room for the first time, I’ve wanted to paint the old tongue and groove floor white. I’m planning to follow the same steps that Anna did here, except for the sanding part since mine is already painted and the paint probably contains lead and I don’t want to play that. I know people get all weird about white floors, but I think it’ll be OK. No shoes in the office!

5. I think I want to make a simple floating desktop out of pine boards…cheap and un-fancy. I’m not sure how much I’ll like the pine with the wallpaper, though, so I think I might whitewash it with something or stain it black or…I don’t know! I’ll have to see how things are coming together…

6. IKEA: For storage of office paraphernalia, I think I might finally buy one of those ALEX drawer units from IKEA. It’ll hold a ton and slip under the desktop pretty inconspicuously. I might switch out the casters with something less…plastic.

7. I know, a whole lounge chair! I want to be realistic about myself and my work habits, and I know I often get tired of sitting at a desk, but I don’t want to be tempted to leave the room if I need to get stuff done. I found one of these Wegner-style folding lounge chairs a couple of months ago in Brooklyn for $20. The webbing is totally torn and needs to be completely replaced, but since it was so cheap and it’s already ruined, I think I might replace it all with some simple canvas (or leather??) slings. In my head this will take no more than 20 minutes and look perfect? I guess I’ll need something to prop my feet on (any chair is comfy if you can put your feet up, right?), so maybe I’ll get a pouf or something.

8. IKEA: What with the white floor and wallpaper and that chair, this room is just going to need a sheepskin. That is all.

9. SCHOOLHOUSE ELECTRIC: Right now there isn’t an overhead light in the room, which is a little bit annoying/dark. Since we have to add lights to a couple of other rooms in the upstairs anyway, I’d like to just bite the bullet and get one put in here, too, since they might have to make holes in the walls and I’d rather have that done NOW than after the room is all nice and pretty. I think this little Thunderbird light from Schoolhouse Electric is so cute. The quality of Schoolhouse’s fixtures is really amazing and they’re well-priced, too.

10. LAURE JOLIET STUDIO: I don’t even really know how my friend Laure and I started talking online, but she’s a totally hilarious and awesome person who also just happens to be an extremely talented and accomplished photographer. She recently opened up an online shop to sell a modest collection of prints——they’re all black and white and HUGE (3′ x 4′!) and cheap, and I love them! I already got this one (taken at a natural history/hunting museum in Paris, I gather…) and I’m pretty excited to hang it up. I think the whole ensemble of this room might lean a little feminine, so obviously I need some French taxidermy and guns to manly it up.

11. CLARK + KENSINGTON: I still have some leftover paint from the kitchen, and I think it’s enough to paint the rest of the walls and moldings in this little room! Since the wallpaper is so bold and dark, I just want to rest of the walls to be a simple grey-white with white moldings. Nothing crazy!

That’s my big plan! Office by Christmas? Is it possible? 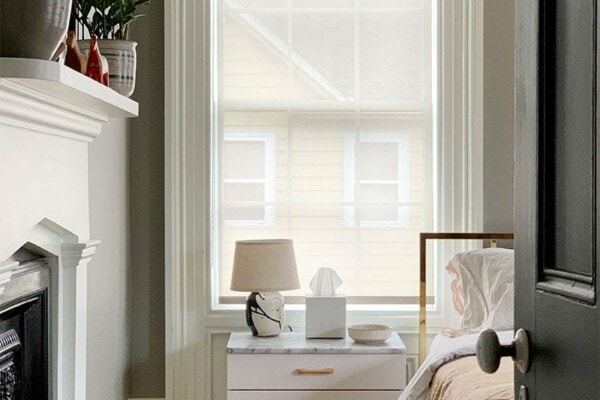 From the Vault: My Bedside Tables! 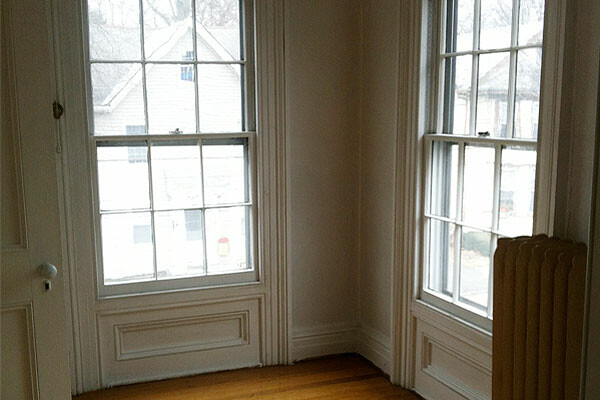 The Guest Bedroom is Like a Real Room and Stuff. 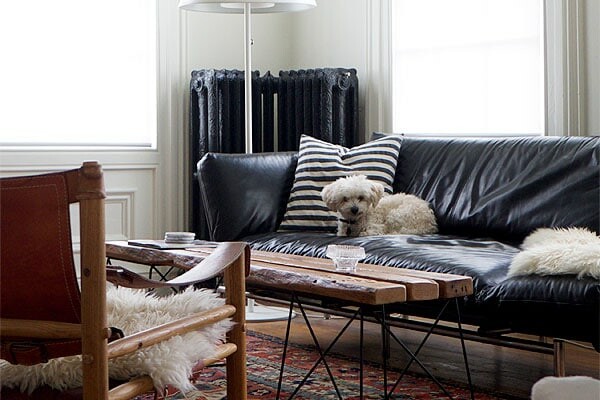