It’s been a while since we did a good old “look, here’s some crap I bought!” post, hasn’t it? It’s a crying shame.

Well. In case you started reading this blog less than 10 minutes ago and don’t know what I’m all about, first of all—welcome. Second of all, you should know I like to shop. I like to shop but I don’t like to spend a lot of money, so at some point in my life I really embraced that the way to fulfill both of these goals was to shop for secondhand stuff. eBay, Craigslist, consignment shops, weird barns full of antiques, thrift stores, the curb on trash night, auctions, salvage shops…I love them all equally and for different reasons. I’m an equal-opportunity crap collector. Admittedly a part of the appeal of doing freelance design work is that I get to spend more time satisfying these urges, except I get to buy things with other people’s money and for other people’s houses. Even though I end up wanting to keep everything. Life is one big struggle.

I’ve been trying to slow my roll on the thrifty front lately for two reasons:

1. We are running out of space, and it makes me feel like a crazy person. Our basement has extra furniture. The room above our kitchen? Packed. There’s furniture in the garage and furniture in the big, un-renovated living room, and there’s just no way we’re going to use it all—this much is clear. Of course, I maintain that we will use some of it, and therefore we should keep it around until the house is done, at which point I’ll need to find a new excuse to hoard. A client might need it! The cottage might need it for staging! And so on. I’m great at justifying my crap.

2. Buying cheap stuff is only cheap until you buy a lot of it, at which point it becomes…not so cheap. And I’m a little cash-strapped right now between this stupid house and this stupid cottage and being in between freelance gigs the heat bills on our house ain’t cheap and…ya know. Should probably stop buying things that aren’t human food and/or dog food.

BUT SOMETIMES YOU CAN’T HELP IT. SOMETIMES A FRIEND (who you invited) DRIVES YOU TO A PLACE (because you specifically asked him to) AND SHOWS YOU NICE THINGS (which you reasonably guessed would be there in the first place) AND YOU’RE FORCED TO BUY THEM (because otherwise you might feel sad later on that you didn’t).

Ugh. So here’s some shit I bought because the choice was basically between these vintage items and everlasting regret and remorse. 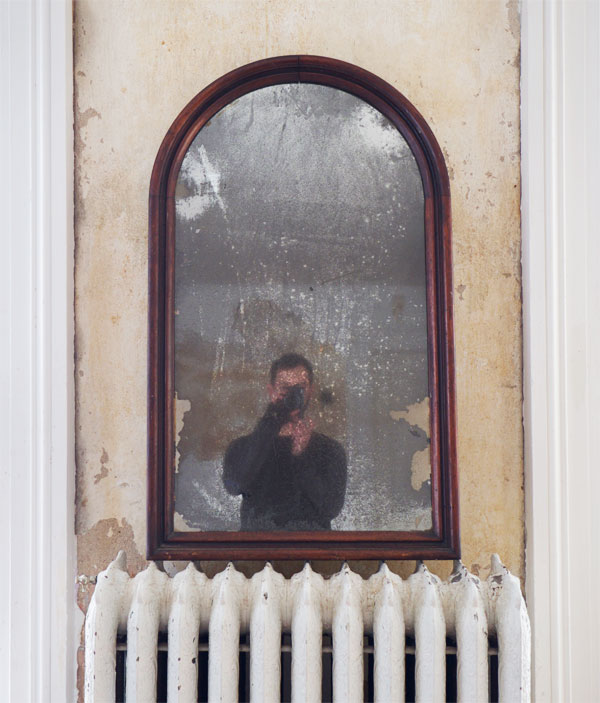 So, this MIRROR. Or maybe I should call it a “mirror”? Lord knows I do not need more mirrors. My main weaknesses in life are old mirrors, old rugs, old lighting, and old chairs. Also, old houses and old dogs. I have a lot of mirrors and I love them all but I’m especially into this one, and at $60 I felt like I owed it to myself (I did not) to take it home and make me so happy (it did). This beige colored parts you’re seeing, by the way, are just the wall behind the glass, where the reflective foil has just completely worn away and disappeared over the years. 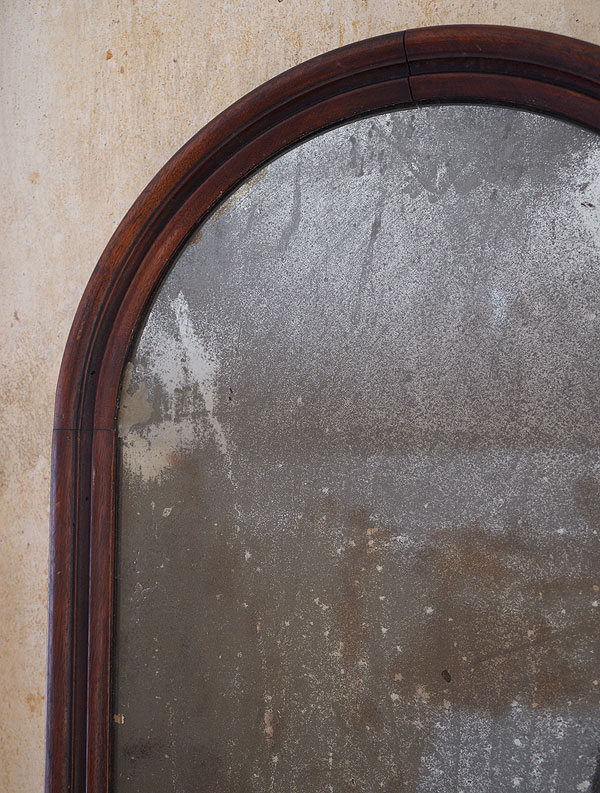 My major rules with mirrors are these:

1. There has to be something interesting about the frame. If you only like the shape of the frame, you can always paint it, but I like my frames to have some weird Victorian detailing like the one in the office or an interesting shape like the one over our apartment’s mantel, or just have a great patina of wear like the one hanging out in the kitchen. I love the shape and the tone of the wood on this guy, so it’s a winner.

2. There has to be something good about the glass. New mirror glass, even if it’s in an old frame? Kind of boring, usually not worth it. Extra points for a bevelled edge, but not necessary. My real weakness is when the foil backing that makes the mirror reflective starts to disintegrate over time, leaving what some would consider “damage.” That’s just patina, folks! As long as the glass isn’t shattered, I pretty much feel like the “worse” shape it’s in, the better! This guy ranks pretty highly, to the point that it barely even functions as a mirror anymore. You can get the basic idea of looking at a human figure, but that’s about it. It’s oddly flattering. LOVE. 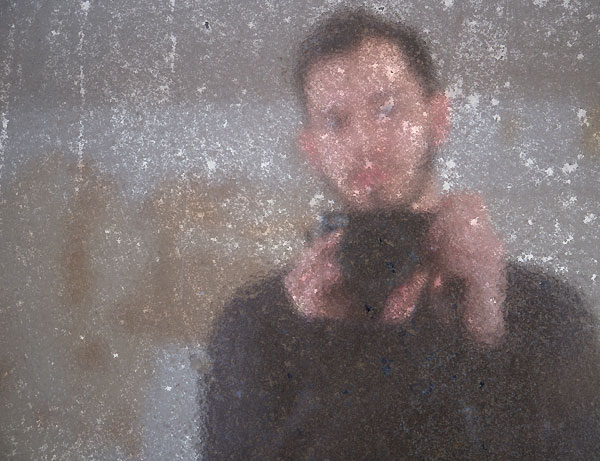 Also, it tells me what to do at night. Shhhhh.

What else did I buy, you ask? I’ll tell you. 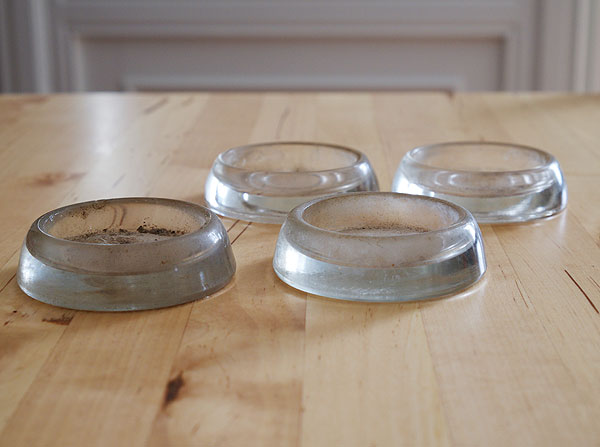 For a while now, I’ve been on the hunt for some old-school glass furniture coasters. You can still buy these new and there’s a nice selection of vintage on eBay, but for some reason I was stubborn and wanted to just stumble upon a bunch of them in a junk shop or something. For what, I’m not even really sure, but I figure they have to come in handy and they just look a billion times more awesome than a shim or a block of wood or whatever the other alternatives are.

Anyway, I bought 8 in total! The shopkeeper wanted $2 a piece for them (I had to hunt them out of a huge bin of old Atlas jar lids), which was fine I guess. 4 of them are smaller and four are bigger—these are the bigger ones pictured above. I probably should have taken another photo after I washed them because they no longer look like a gunky mess, but sometimes I forget stuff. 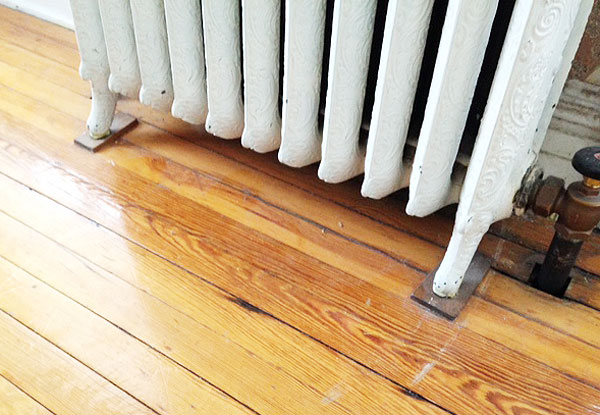 Anyway, we had two radiators that needed to be shimmed under the front two legs. Radiators are really designed to be most effective when sitting level, which isn’t always easy on floors that have some slant to them. Luckily the floors in our house are very level for the most part, but there are areas where they do slant downward away from exterior walls for about 1 foot into the room and then more or less level out. Prior to this discovery, the radiators had been sitting on some unattractive old pieces of scrap wood…but now…. 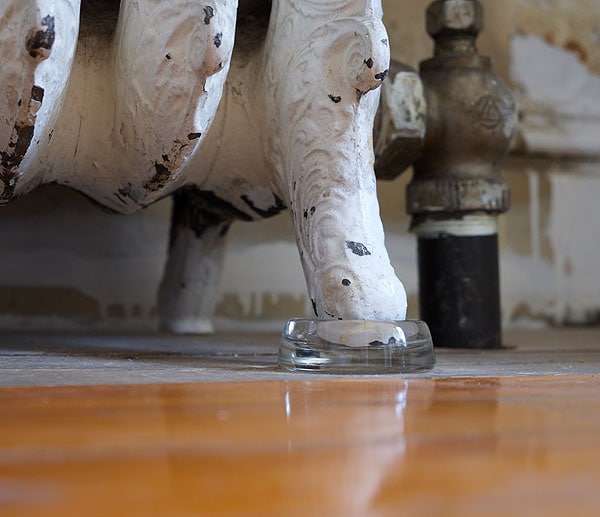 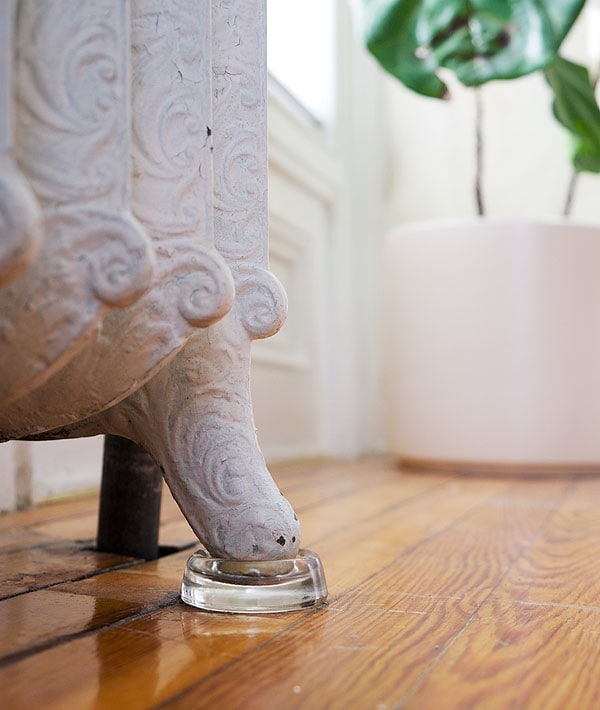 I put the four smaller ones to work under those two radiators, and they look a billion times better! I know that sounds like a bad idea (incredibly heavy objects on top of pieces of glass…), but it seems totally fine and stable and unlikely to cause any problems. So the front of the radiators have been shimmed up a bit, and…I love these things. They’re so pretty! Getting them under the feet was a little challenging, just because the radiator did need to be lifted/rocked a fraction of an inch to get the coasters under the feet. You do have a little play with these pipes, in my experience, though not a ton, so you want to be careful and watch your unions once everything is settled. One of the radiators did develop a small, slow leak at the union after we persuaded the coaster in, but a couple turns on my pipe wrench was all it needed to seal itself up again. No leaks + level radiators + attractive shims = success! 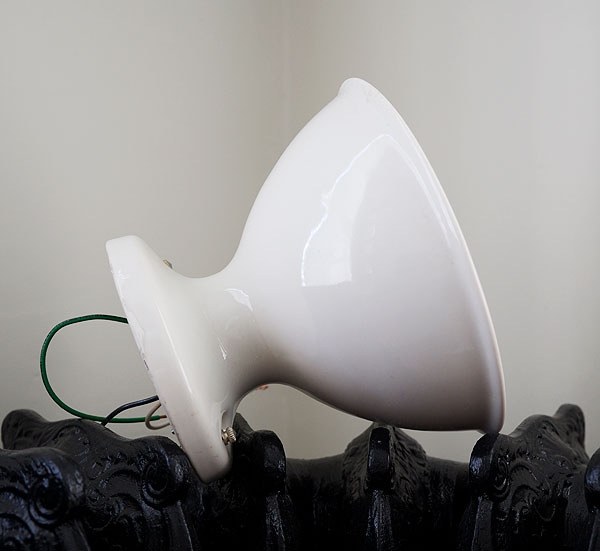 Oh, let’s see, what else…OH RIGHT THIS LIGHT. I love this thing. It definitely bears a strong resemblance to the large Alabax light from Schoolhouse Electric, except this one is vintage and came out of a prison! At least that’s what the sellers told me. Clearly I have a thing for stuff in my house having dark, creepy pasts. And at $85 vs. $139 + shipping for the new Schoolhouse version, the price was decent.

I think this guy is going to hang in the back of the first floor hallway. We had an overheat light added there since it was SO dark back in that area of the house, but I don’t want to make it too conspicuous. The big nice chandelier with the big fancy ceiling medallion will go at the front of the hallway, where the front door is, but I don’t want to make a big production of a light fixture in this spot. Something small and inconspicuous (but pretty, duh) has been what I’ve been on the hunt for, and I think this fits the bill perfectly. I can’t wait to finally paint out that space and get this thing hung up! It’s already been freshly rewired, too, which saves me a little work. 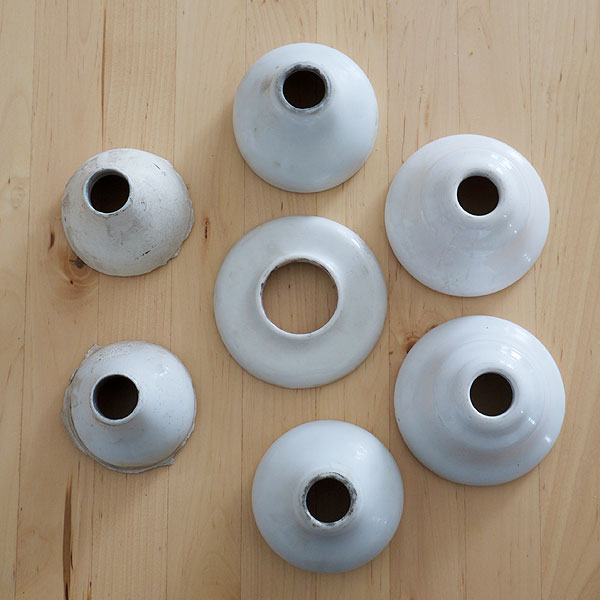 Lastly, I picked up this little assortment of pretty porcelain plumbing escutcheons! You see these a lot in old houses with old plumbing, but they should be easy to incorporate in new plumbing, too. The ones with the little holes are for supply lines, like on a sink, and the bigger one should work for a waste line on a sink. 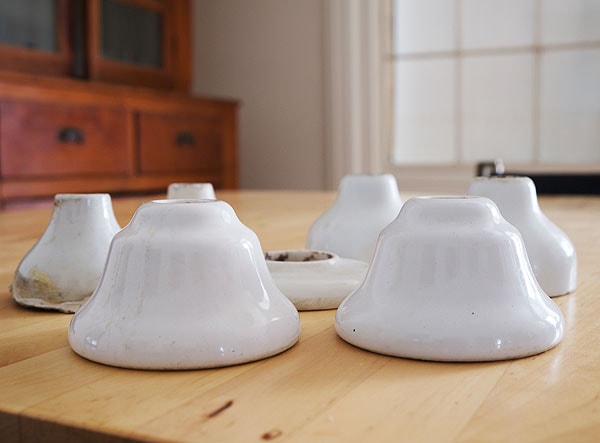 They need a little work in terms of stripping the paint off and cleaning them up a bit, but I love them! I think I’m going to be greedy and save these two more elaborate ones for the bathroom in my own house, but I’m planning to put the smaller/simpler ones in the bathrooms in Bluestone Cottage. I know I could just as easily go buy some cheap stock chrome ones at Lowe’s or something, but this will just take it up a notch—and at $5 a pop, that seems entirely worth it. It’s the little details that will make these brand-new-but-aspiring-to-look-kind-of-original spaces look appropriately old, so I’m really psyched to see them in place…even if my plumber is going to think I’m crazier than he already does. He loves me for it, and I love him for putting up with me. Bless his beautiful plumber heart. 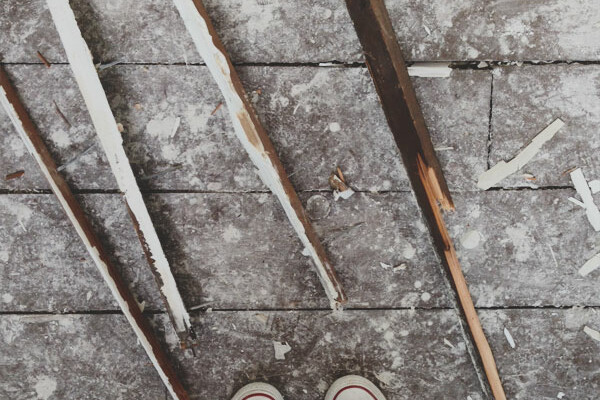 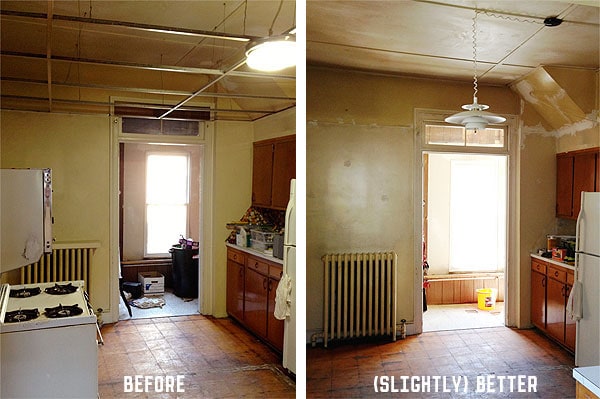 Endless Prep Work in the Kitchen 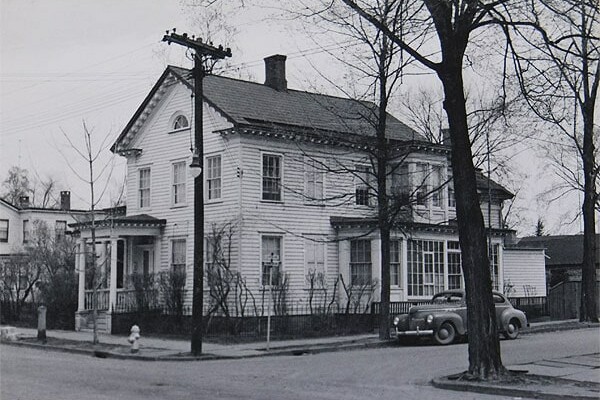 The House: Then and Now!