Sink for the Cottage Half Bath!

OOF. I’ve been working on several different posts and a million other things and I can’t seem to get anything done. I’m all over the place. So…hi, folks! Long time no see. Missed ya. 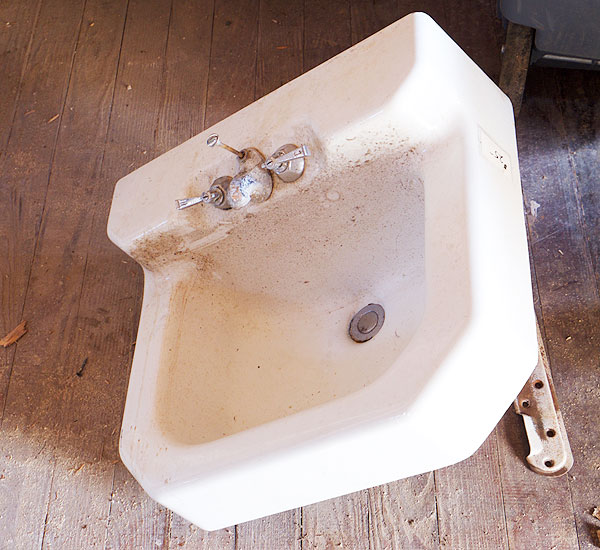 The big news today? Not that big. I bought another old sink. My life is basically non-stop action and excitement with a heaping scoop of filth thrown in for fun.

I’ve been keeping my eyes peeled for a cute cast iron sink to go down in the half-bath on the first floor of the cottage, and this one fit the bill! It’s probably from the 40s or early 50s, super heavy, and—despite the grime and filth, in excellent shape! I love the simple lines (which to me don’t really scream any particular era—just simple and classic), and the flat section at the top where it’ll meet the wall seems like a perfect spot for a bottle of hand soap and a cup for toothbrushes or whatever. It’s a pretty small bathroom, so I like that this particular sink has that little storage opportunity built-in. I’ll still put in some kind of cabinet or shelving or a medicine cabinet or something, but it’s a start! 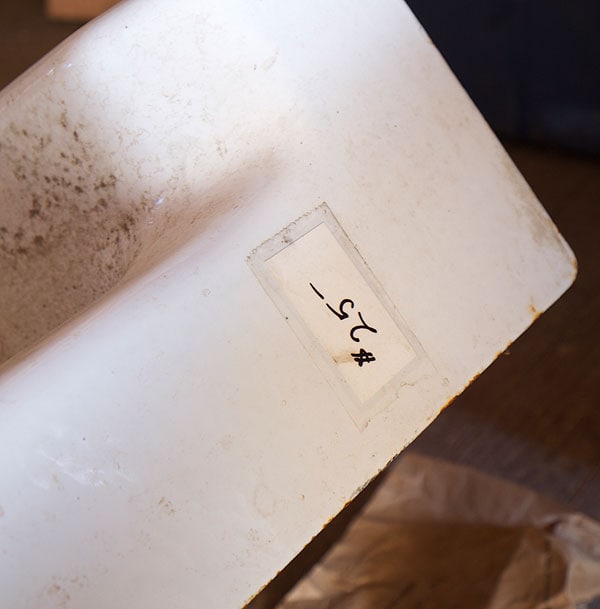 The best part? BOOM. $25 dollars. This entire project has definitely come with some unexpected costs, so saving money here and there on stuff like this really helps keep the budget more in check. 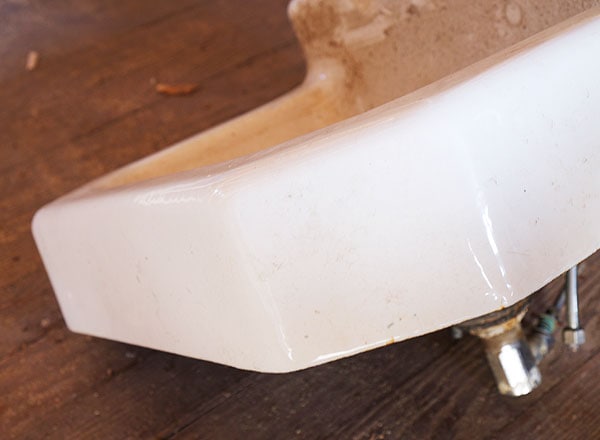 There’s a few things to think about when buying vintage enameled cast iron fixtures, and the first is really to inspect the condition of the enamel. I don’t mind a little etching and minor staining (which can often be improved with non-abrasive cleaners or plain old white vinegar), but major chips, cracks, or areas of damage—especially where water will hit—will rust and degenerate over time.

Damaged enamel doesn’t necessarily mean it’s not a good buy, especially if the shape is super unique or something, but all of the repair solutions that I know about will never really measure up to an original enameled coating. There are epoxy-type patching compounds you can buy at most home improvement stores, which you basically spread on, let dry, and sand smooth, but the finish is never going to look seamless or perfect—it’ll just insulate the cast iron from further rusting. You can also get stuff like this reglazed professionally (typically they come to you, mask everything off, and spray a new coating on the fixtures), which looks nice at first but isn’t all that durable—you generally have to have it redone about once a decade or so, and it scratches and chips fairly easily in the meantime. The most durable solution I know of is sandblasting and powder-coating. In this process, the enamel finish is blasted off until the cast iron is bare, and then the entire thing can be powder-coated, which is essentially a very tough, durable paint treatment that can be done in a million different colors. It also tends to be pretty affordable, but prices vary. That’s the plan for the downstairs bathtub in my house, since it’s in super solid shape overall but the enamel has seen much better days, and I was quoted $300 to have the work done…which is much less than I’d spend on a brand new tub! This is the same process that my pal Anna had done on her bathroom fixtures, a radiator, and some exterior metal work, and all of them have held up beautifully!

I don’t know of a way to actually have something completely re-enameled (anyone?), though, so the best thing is really to try to find fixtures that don’t need this kind of repair work in the first place. It also keeps costs down, duh-sies. This sink is in great shape, so a little scrubbing should take care of it! 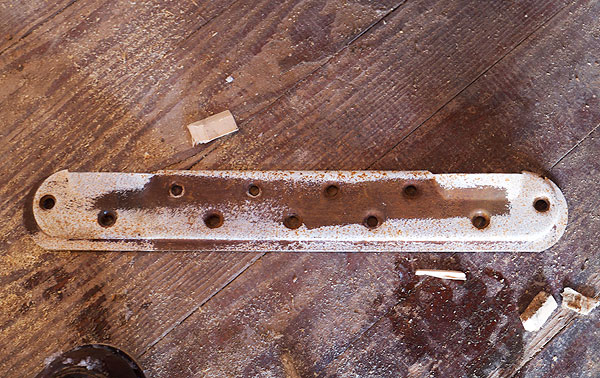 The second thing to think about is the metal cleat that the sink hangs off of. If you’re installing one of these bad boys, bear in mind that they are HEAVY mo-fos and you may have to open your wall and install some wood blocking for the cleat to screw into. Anyway, often vintage sinks get separated from their original cleat. I bought this sink from the Historic Albany Foundation, which is a fun salvage place with good stuff at great prices, and luckily for me they had a big bin of these cleats to peruse, so it was just a matter of finding one that fit! If your sink is still in production (like the Kohler sink I bought a while ago), you may be able to just order the cleat directly from the manufacturer, and if you’re really in a bind, lots of people get them custom-made by a metal shop for a fairly nominal cost. Anyway, there are options! If you love the sink, don’t fret if it doesn’t have the cleat.

By the way, the nice man at the salvage place told me that often you’re better off with a steel cleat than a cast iron one. Cast iron becomes more brittle over time, so sometimes the cleats are cracked or broken either prior to or during installation. I know that rusty little thing looks like bad news, but it’s very solid and I was assured should hold everything just fine. 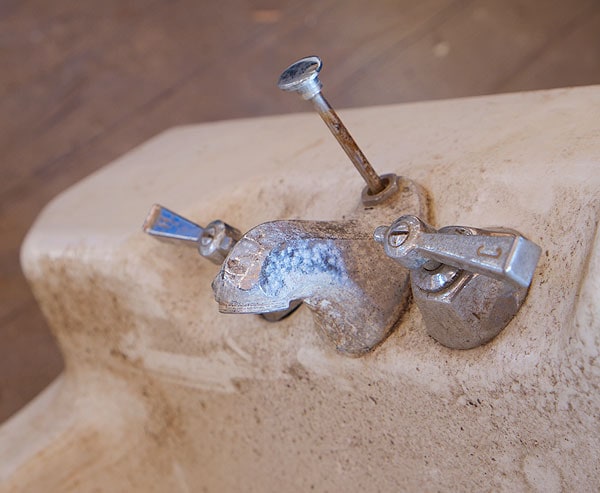 Lastly, the taps! As much as I don’t really mind double taps on old sinks, especially for a half-bath, I gotta say I do prefer a single faucet. Often cast iron sinks that are originally made with double taps can be elegantly converted (Anna did this in her bathroom, too), but the cost of the plumbing work and the faucet/knobs/escutcheons definitely adds a few hundred dollars to the price. So potentially your cheap $25 sink really becomes a $300-$400 sink, which is still fine, but maybe not the kind of deal you thought it was.

ANYWAY, I know this thing looks REALLY gross, but I’m guessing some Barkeeper’s Friend and some TLC will clean it up. Maybe a few new little parts, too, but hopefully that won’t be a big deal. The faceted shape of that little faucet is so cute, though, right? I like it.

I’m so glad to report that—I THINK HOPE AND PRAY—winter is pretty much done. There’s still snow on the ground, but it’s melting, and hopefully it won’t be too long before I can really get back to work on the cottage. The lack of heat (or a gas line!) really kind of messed everything up for a few months, but now that we’re more or less out of the danger zone of pipes freezing and stuff, I’m excited to get back in there! Now that things have stalled and dragged out for so long, it’s going to be super exciting to start making real progress again and whipping this place into shape! 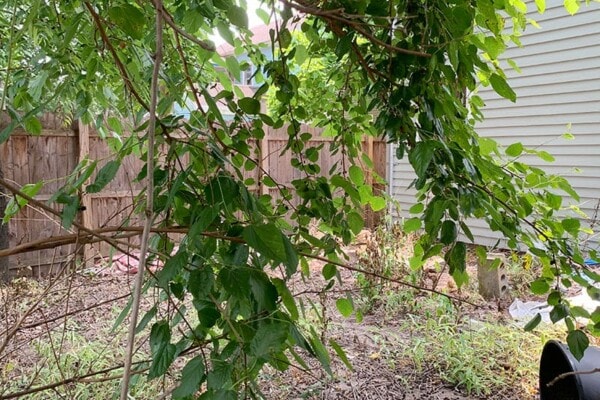 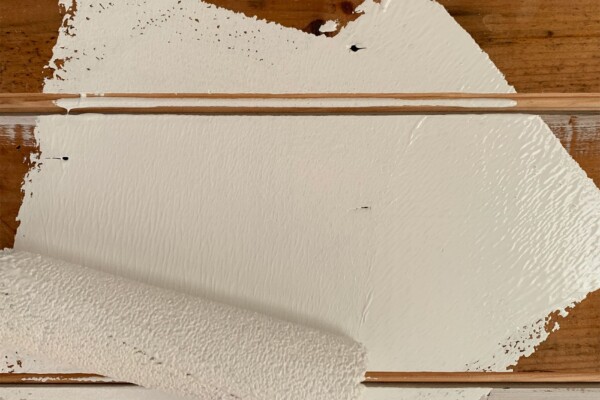 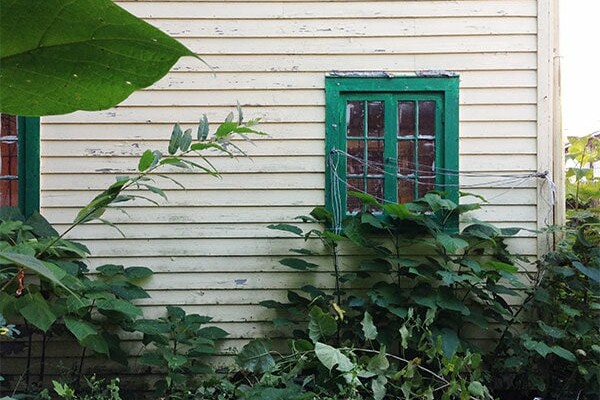